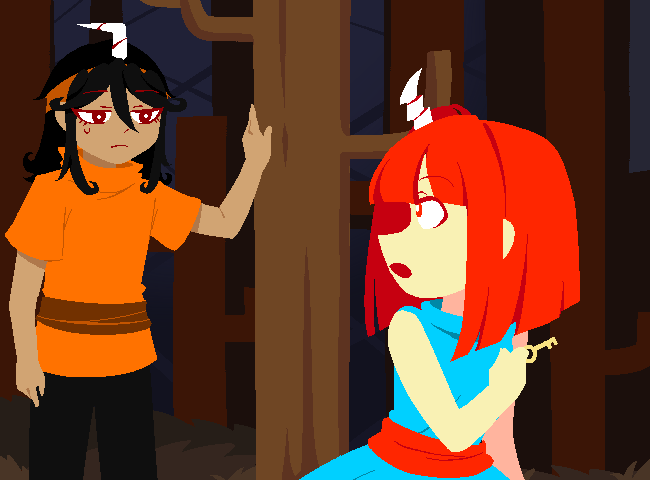 Looks like she is going nowhere but home, apparently.
Just as you've come to expect of her. 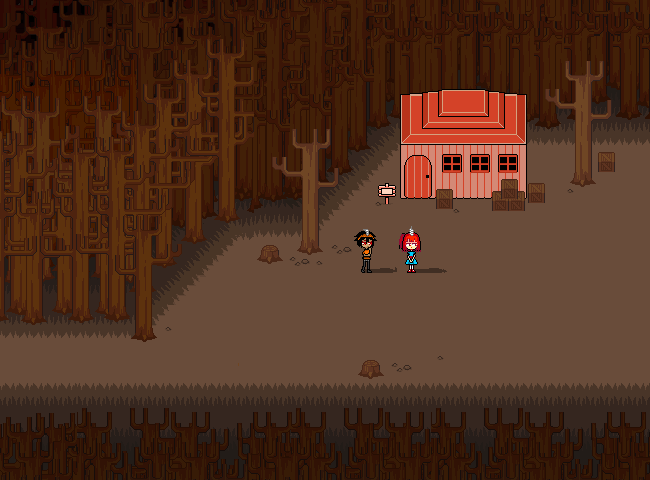 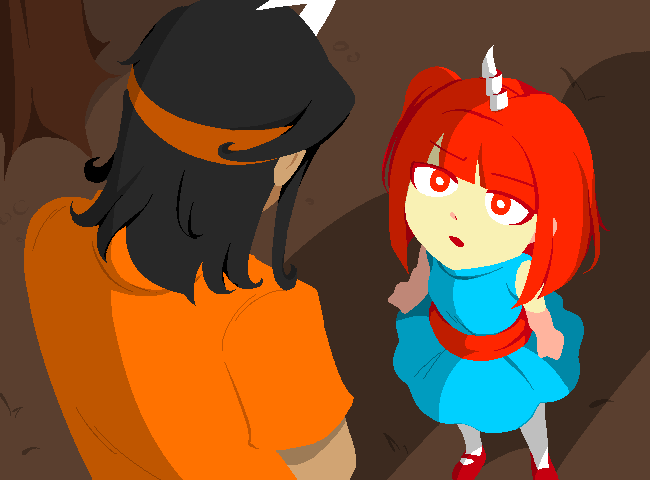 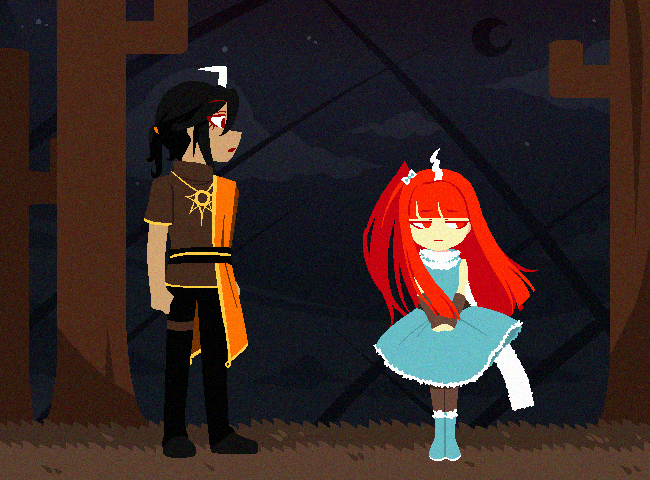 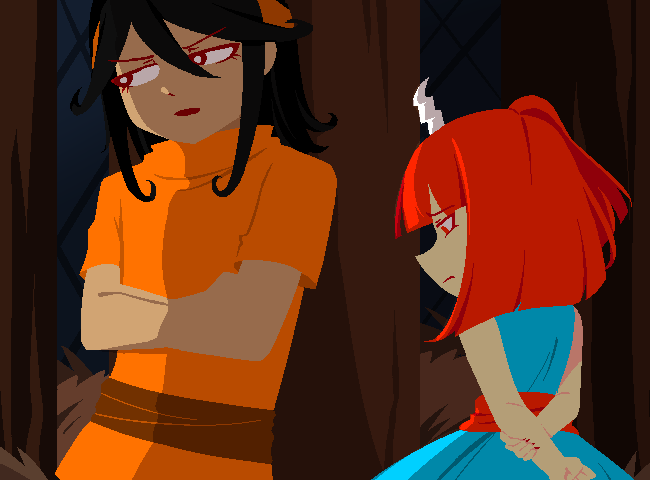 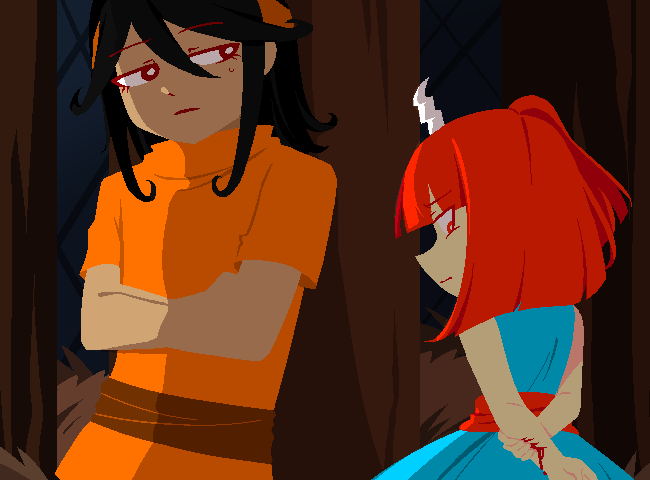 How in the world is that supposed to describe you?

Hell, she knows nothing about the REAL you.
Though you deny it, you're just burning up with jealousy on the inside, an awful desire to take the place of another.

It's a revolting feeling, one that is hard to reconcile with.

Thank god she does not know what goes inside your mind.
If she knew, she'd be scared. She'd rightfully detest you, as you deserve. 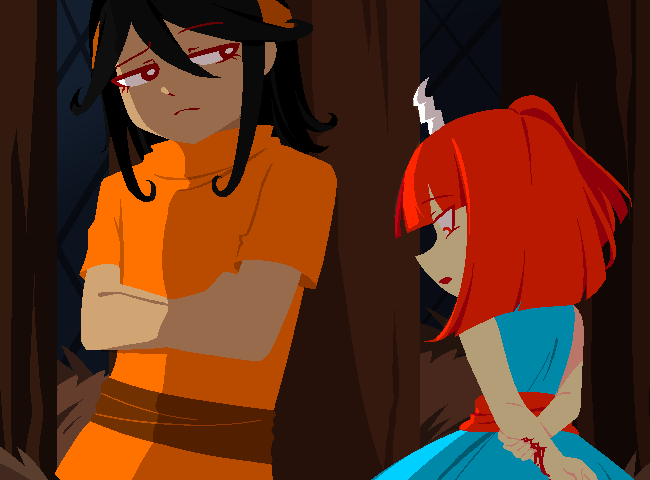 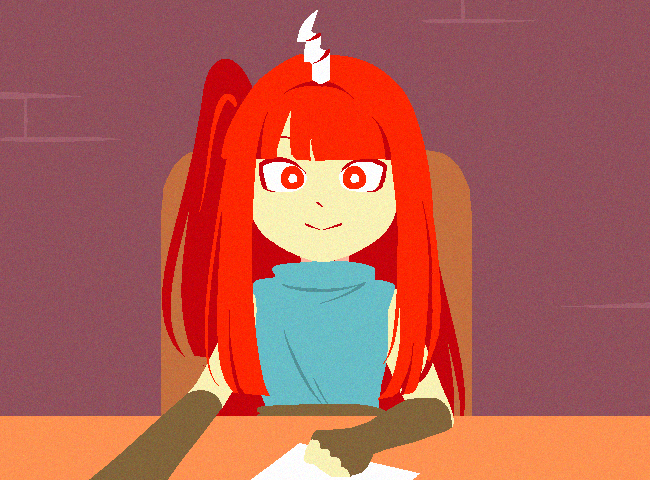 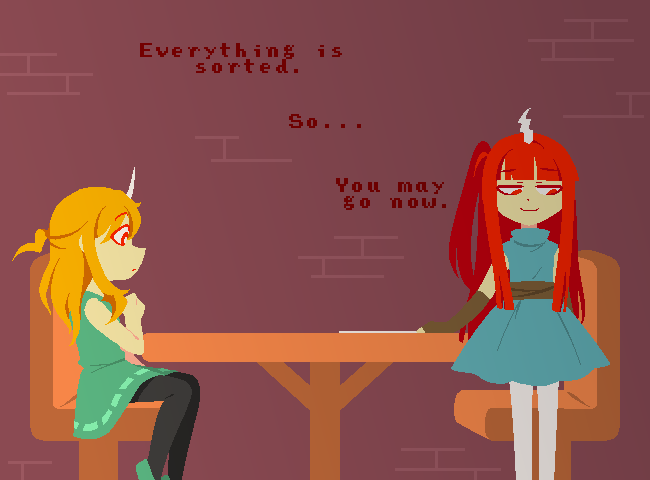 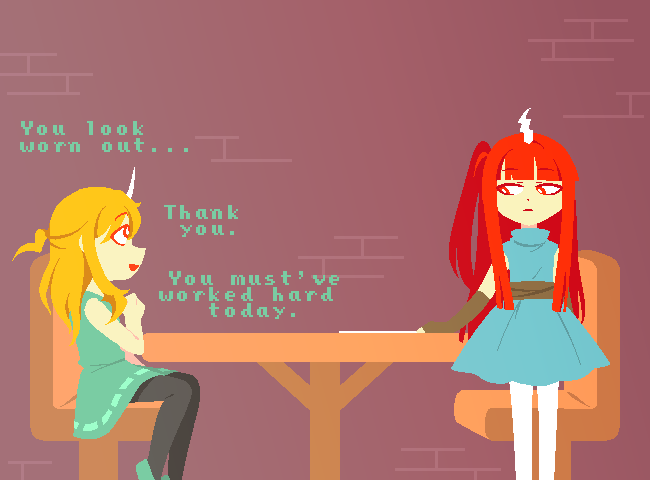 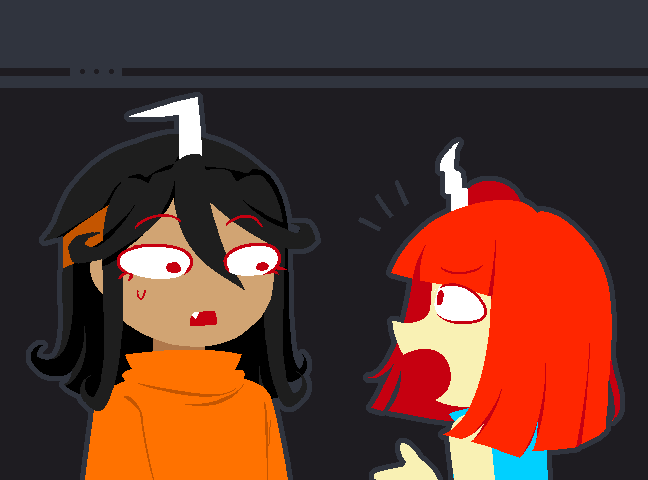 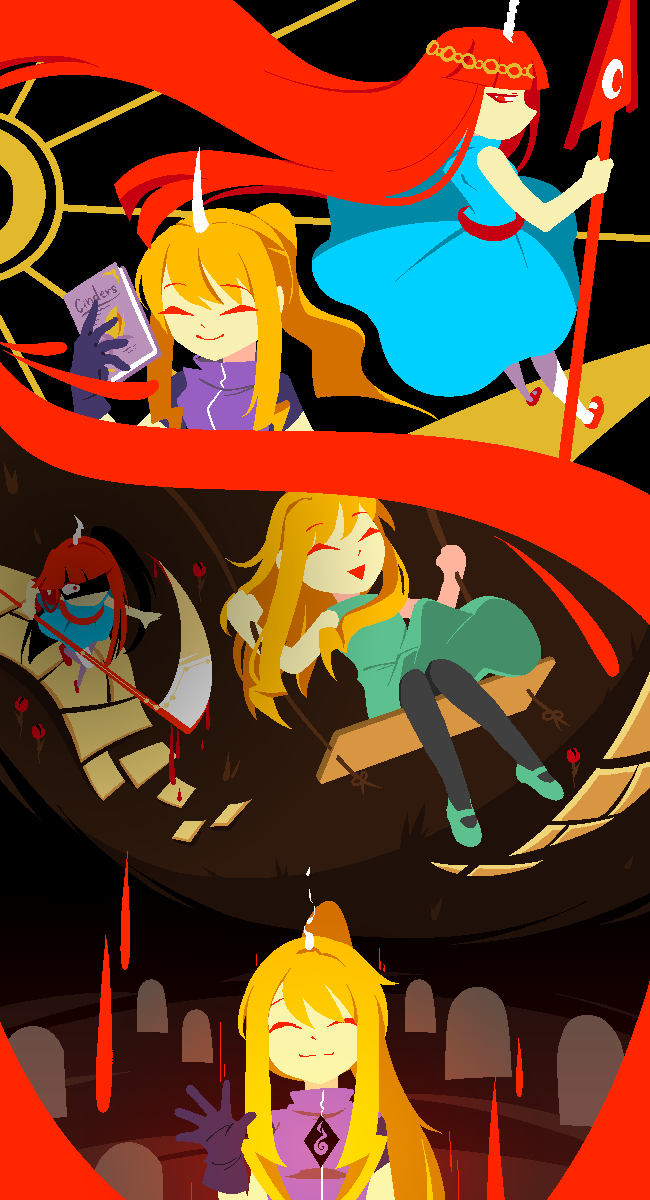 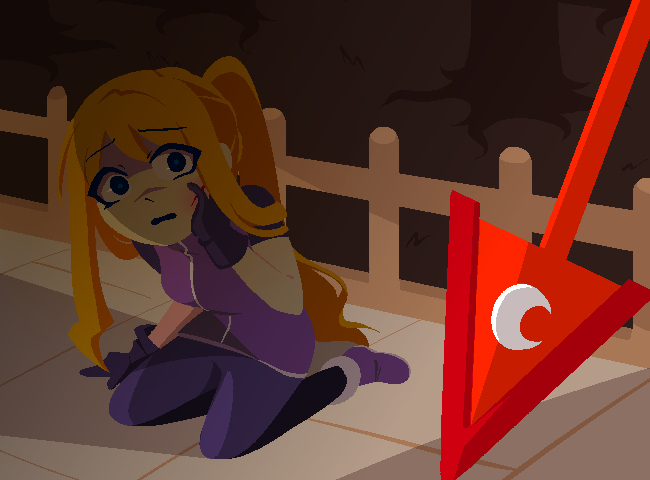 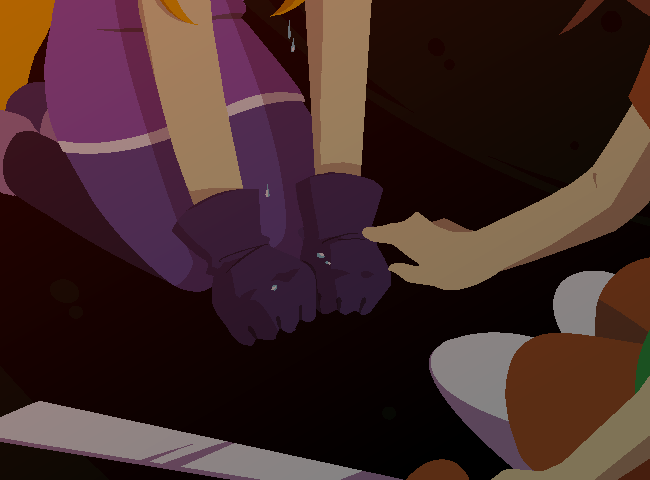 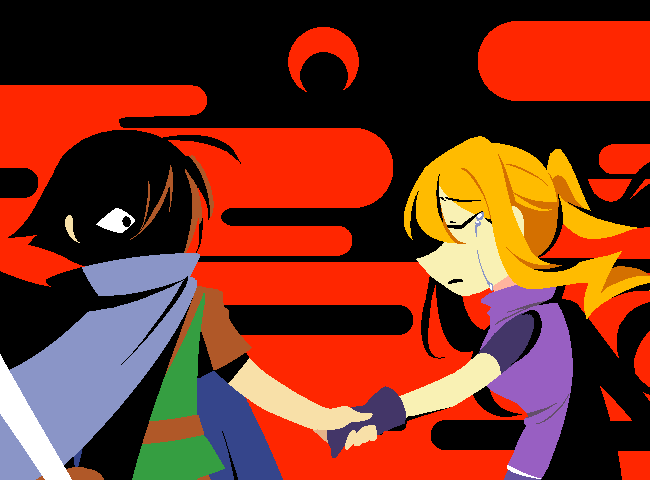 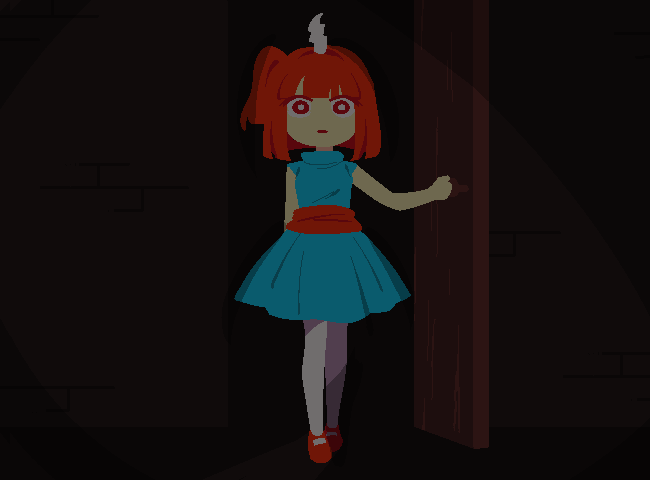 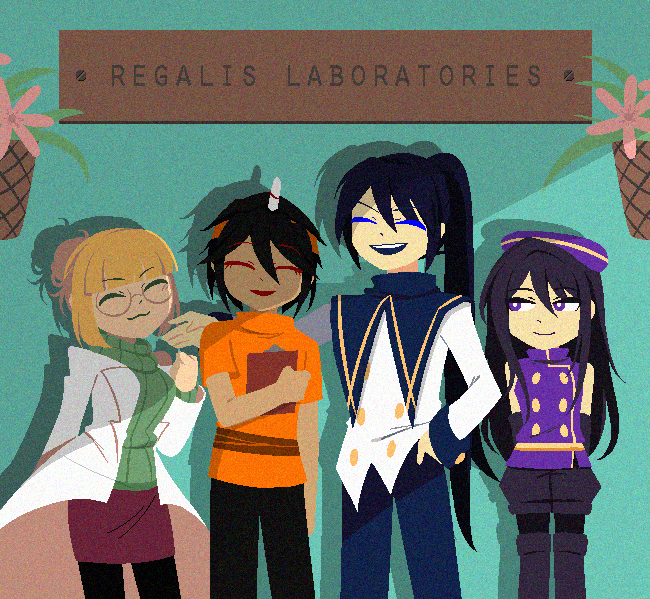 ...Very dedicated, just as the prince had said.
Yet she also seems to be very ineffective, unfortunately.

Does his highness realize that part too, and simply chooses to forgive it?
It is as if her failures are forgivable, but yours aren't.

How annoying it is that you cannot stop comparing.

Still, you'll choose to forgive her.
Just this once.

If his highness knew all this, what would he think?
Even though, supporting a human is the worst act one could commit in this world... is Kotori's reasoning sound enough that the prince would forgive her?

Not that you'd ever tell him.

But, right now, Kotori is being rather honest for the first time in years.
You shouldn't let this opportunity slip by.

Obviously, it's because... you have to know what she's hiding.
Otherwise, you won't understand why the prince trusts her, despite her failures.

And uh, maybe, some part of you is concerned as a former friend, but... ugh.

Look, Kotori is a very isolated person.
Who does she go to whenever she's feeling conflicted? For you, there's no need to seek anyone beyond your own family, or even his highness, if appropriate.

However, Kotori has no family, and has driven away every friend of hers by now.
As things stand, there's only you.

Somehow, you still bother to check up on her. 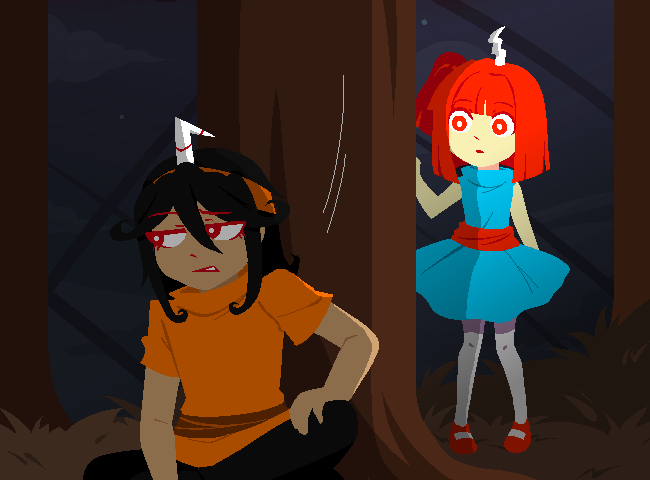 Because, god dammit. Does she really not realize that by deliberately isolating herself, and then looking so obviously sad about it, it becomes so annoying to you, that it makes you physically unable to leave her alone - even if she asks you to do that?

Not that you're going to say any of this out loud. 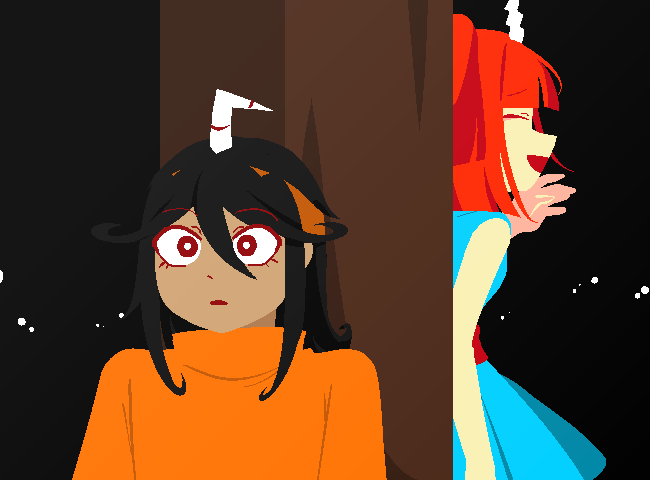 Whoa. Did she really just laugh?
So she can still laugh like that.

You wish you could turn around to see it.

And, wait, what? "You never change"?
Isn't that the same thing his highness said about you? 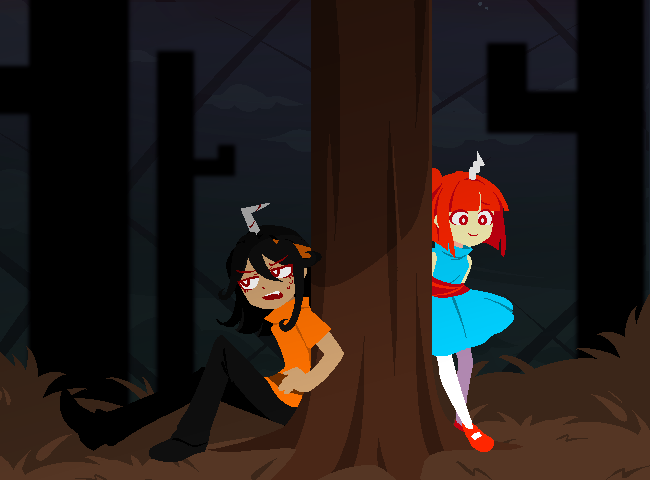 That's miles better than shutting you out again, even though you definitely said some really embarrassing things. You might've even made a few daringly wrong assumptions on your own, as well. Who knows...

She hasn't laughed like that in so long, though. How nostalgic.

You expected this, as well.

That means she currently stands before the one person who could provide her some sort of support. You definitely wouldn't want to let her down, then. 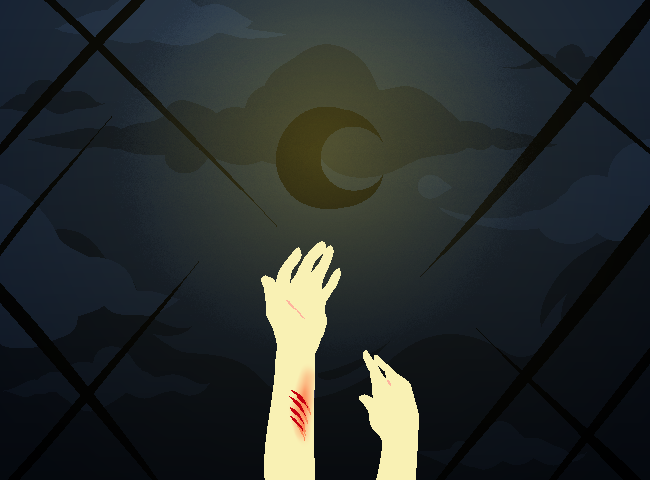 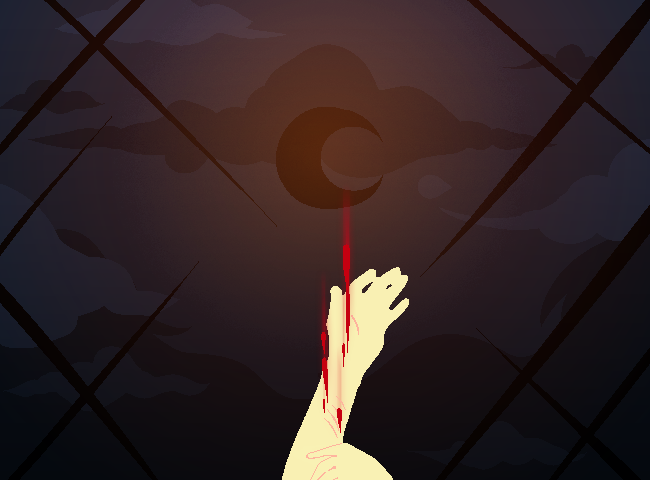 So she's testing the waters first. Your waters, specifically.
Jeez, are you really that unapproachable, or did she forget the entire year you two spent in a relationship?

Or... hey, maybe you've just changed too, without noticing it.

Even though she and the prince both said otherwise... 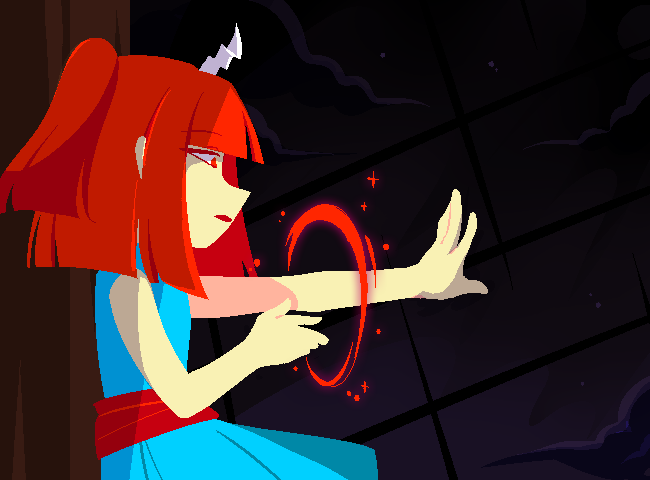 Solis: What exactly does she mean? Ask her to elaborate.
Subscribe
Login
18 Comments
Oldest
Newest Most Voted
Inline Feedbacks
View all comments

I haven't posted on any of these before because I've been to busy being COMPLETELY INVESTED in this story (despite my horrible memory causing me to forget past lore).. but I can't help but post a completely unsubstantiated theory.

I believe Nino is a winged. There are a lot of inconsistencies in this belief, such as his appearance and seemingly human limitations but from what we've learned of the Winged and how they act, he fits a lot of these bills.

The way his color is used to emphasize the word 'misfortune', while a bit too obvious, also leads me to believe he's based around Misfortune. The way he seems to call to Aria in what might be Kotori's POV leads me to believe he causes misfortune, tragedies on the downlow, then comes in (perhaps even unknowingly?) to help them, which would grant him this 'appreciation' the Winged so desire. Off paper, this seems so far from the truth but I can't help but think that, aside from all the other details, Nino might very well be a Winged?

“Considering “you monsters” and “those humans” you might be closer to the mark than expected.

Oh man, I can't say anything about theories here, but I want to thank you for leaving a comment regardless! Super glad you found the story enjoyable.

Haha! No worries. I've actually been super immersed and into this story ever since I've found it. Thanks to Drakengard, Nier, etc, i've always heavily appreciated a well written story, and this just hits so many marks. Thank you for continuing this and putting so much damn effort into making the story and characters feel truly alive.

There's also the fact that when he was healing himself while falling into the caverns, he says that friends would only hold him back, and he also says he'd only have them if they could be "used".
You may have just cracked the code to Nino's origins.

It's been a year, or nearly so, since I read those pages.. I don't even remember that.

If that's the case, I lowkey can't believe I somehow hit so close to home. Though I will admit, a lot of these things could also be chalked up to human selfishness and such, but I feel that sometimes Nino takes it a step further. He and Kaji are also the only ones we've seen affected by such a specific amnesia.

I do wonder what caused his? I remember we saw a flashback of sorts to what I assumed was a human village (when he was 'killed'??). There's also his sword, which Reed immediately recognizes as belonging to the Human Royal Guard. Interesting.

Solis/Kotori: Why aren't you spending your moments out with your people, after all, even if its between monsters and humans, you can always try to do something about it. After all, "celebration" is at least going to be used tiding horrible misfortunes. So why sneak around about things and not just be on your guard protecting from any forms of recruits, or devious technologies from humans. Why let one small person ruin everything. And why wouldn't his highness somehow notice this person and avoid that disarraying destiny?... and are you sure that your attempts at resolving the human encounter aren't going to contribute to it?

What a spectacular update. I love seeing these sorts of moments between characters, especially as we're really starting to get into the part of the story where things start all coming together.

Thank you, I'm overjoyed to hear it!
I really enjoyed writing the conversations Solis has been having with his totally-not-buddy-pals here. Takes me back to chapter 1 days, though I had little writing experience compared to now. Hope the upcoming updates will be engaging to read as well. ^^
The stakes are definitely rising from here on out.

Kotori: Explain all that you can. The Prince may be safer with Solis knowing.

Sounds like a reason to attend those festivities to try to prevent it from happening... or a reason to stay far, far away from them if you're convinced an assassination attempt will not only occur but succeed.

Solis: What exactly does she mean by that? Ask her to elaborate.

Now, the question is, how did Kotori discover this in the first place? The injury described as "self induced" is reverted to pink and stops bleeding like it closed up when Kotori did something that MIGHT be capable of predicting the future. There seems to be a similar wound or left over wound on Kotori's hand, and Kotori is a guard, perhaps it was simply an accident. That being said, it seems like there's a specific gesture Kotori has to do (not to mention pointing their arm at the moon), meaning it's hard to think Kotori just discovered this on accident (or even intentionally without some knowledge that the people reading this webcomic like me don't know). Given "They push others away, put on a fake smile and say they're fine, or start asking to be ignored...", and "self induced injury", there's a bit of a darker implication. But even then, there's clearly some correlation to the moon.

I have an issue with drawing the characters sometimes that they appear younger than intended, I apologize for that causing any confusion!

The day that Kaji left the moon and started living in the human world was 6 years before the current point of the story, in the time before the barrier & dome were created. Kaji is currently 29 years old as he has told Nino, and as Nino noted, the Winged don't appear to age the same way humans do over the course of their 300 years long lifespan.

I'm hoping this clarifies that Kaji was not a child at the time of losing his eye & his departure from the moon, even though he appears youthful due to being a winged.

Kaji cannot heal. His eyes appear intact because his injuries were medically fixed with human help, since the human royalty had decided to look after him. Ruit, Lune, and Selene certainly did all that they could for the lil' guy. But that sort of thing can't make his eyes *functional* again, so it only dealt with the wounds in order to have that side of his face appear as normal as possible.

Kotori did something to stop her own bleeding herself.