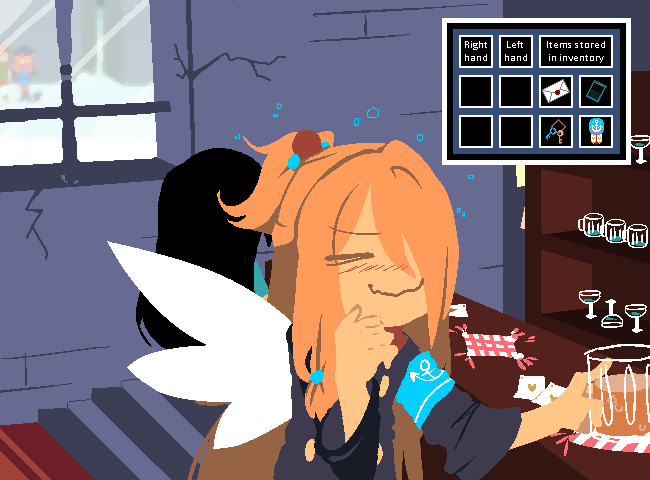 Ha ha, what duties?
You're pretty sure there's nothing waiting for you anywhere.

Plus, you're busy with what REALLY matters right now, and also too tipsy to focus. All for good reason! A guy doesn't get drinks coupled with heartfelt appreciation letters written in fishscript every day- No, wait, a cool guy like you definitely does, and from all kinds of people! But, uh... Ahem, admirers do get busy, you know.

There are two defining features about your admirers.

Number ONE, they have a life of their own that SURPRISINGLY(!) doesn't revolve around adoring you. And well, that's just life for ya. Number TWO, they're really real, and have fantastic taste in who they choose to adore. So just you wait, once they're all done being busy, you'll soon enough be showered in a HUNDRED more praises and letters like this!

However, that's precisely what makes this letter the most important thing right now. 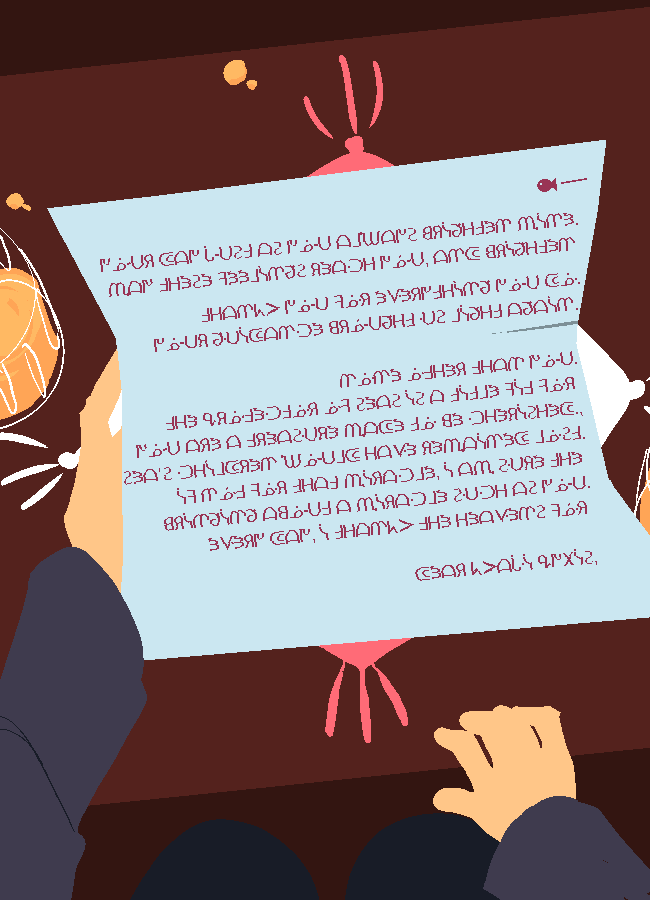 Someone (somefish!?) took the time out of her no doubt busy day to write you something full of honest feelings. You don't think you're capable of feeling the totally ridiculous-sounding earthen emotion called "love", it is often said to be an impossible and rather lowly concept for the winged. But, you do feel some kind of joy when you're recognized and appreciated by others.

You imagine that human-or-monster love must be something similar.

Not that it is too special of an occurrence or anything!! Anyway, you're definitely going to keep this letter forever tucked under your pillow back home, no biggie.

Kaji: You should probably stop drinking and do something better with your time instead. 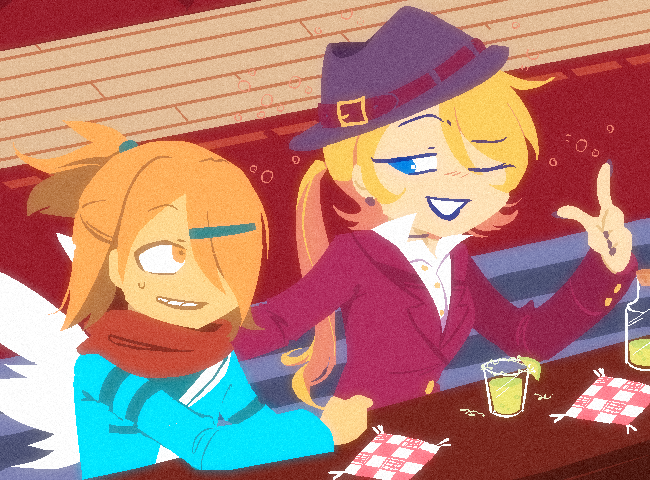 No!!!!!
This IS a good use of your time! Look, you know it sounds stupid, but drinking is actually productive for you.

You know how humans say they drink to "forget their troubles"?

Or, well, that’s what a certain friend and senior told you as you began living among humans, and she’s mostly the only source of you knowledge about human drinking habits. They seem to focus on temporarily forgetting things.

For you, it's the opposite.

A defining feature of your so-called "drinking problem" is that it's not even a problem in the first place. You can stop anytime! Not that you want to. But, that distinction is what really matters. On the occasions that you do drink, which are not few, you always make a point of going all out.

There is a certain limit where you do stop, but that limit isn't low. 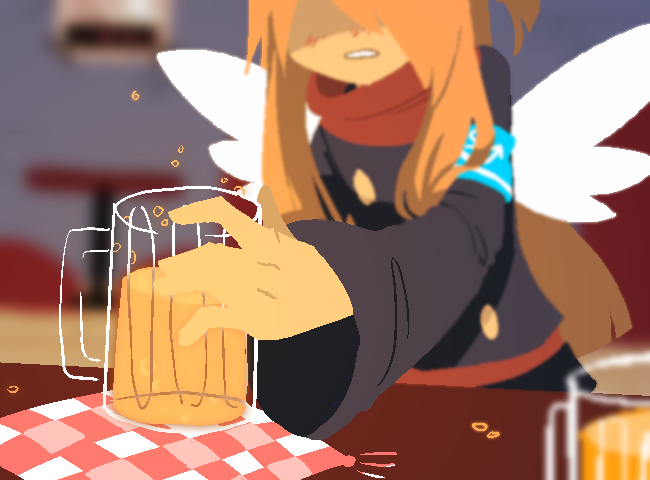 You have your own way of knowing when that limit has been reached. It is the moment you achieve your goal of remembering. Only once it really kicks in, and you can at least properly visualize what you wanted to keep more than any other.

The memories of her.

"Hey, the term you're looking for is hallucinate instead of visualize!"
...That's what you're thinking, right? And you'd be wrong about it!

Calling it hallucinating sounds terribly unhealthy, and this is nothing of the sort.
You will continue to disregard that awful term, thank you very much! 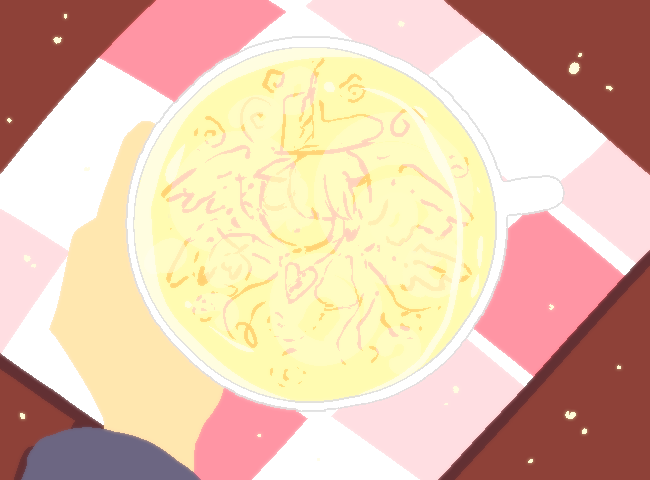 Why, do you really have to ask?

Just how massive is the rock you're living under? She's known by everyone.
No hyperbole here, you do mean everyone, in every sense of the word.

You mean, she is your best friend!

She is the entire reason for you to merely exist, even. There's no bester friend to be had than that, is there? She is someone so nice, with the most brilliant of minds, the most dazzling of features, and the most radiant of smiles.

The first time you opened your eyes, that smile that was the first thing waiting to greet you into life itself.

A shame that you just can't remember what it looked like now.

But hey, this is what fixes that problem.

When you stop overthinking, you’re able to see with more clarity.

Not in the physical sense, but in the metaphysical.

You can slowly remember your long forgotten memories. It’s as if clouds which fogged your mind for years can finally part, if even for a single night, to show you your former days of happiness in honor.

Days where you lived only to be someone’s best friend and guide.

Yet, six years ago you found yourself abandoned here on a rainy day, without explanation or memory. Suddenly, one day, you could never fly towards my light again.

In your mind, you recall a continuous stream of friendship and an eternal bound between you and your friend, but it is so suddenly cut short by a gap of blinding darkness. Such a wicked, blinding twilight, it seeks to distract from one’s purpose.

And with a purpose disilluminated, for what reason should a varlet exist anymore?

Yes, I do know that you’d just like to recall a single memory in these stupors. 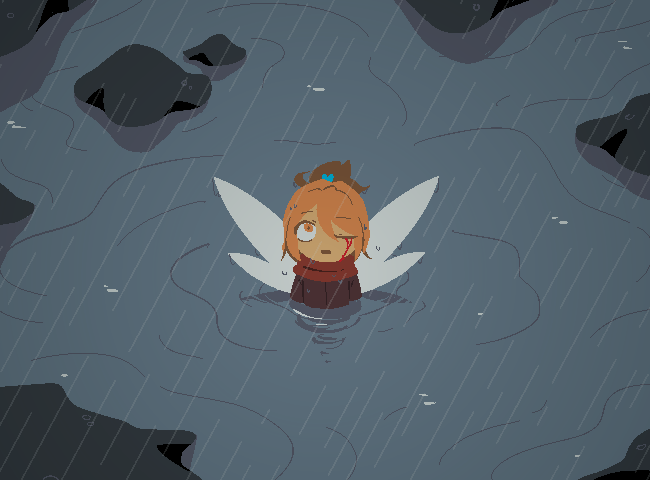 What happened to let you become so unwanted and discarded, after existing solely for my sake? No, what you should be asking is, did you do this to yourself?

Why, of course you did. There's no musing the obvious.
After all, the imperfect being between us two is you, and only you.

Sure, maybe it's problematic if a human does what you're doing, but not for you. You live a very different and special situation, don't you. And you sure know you can handle yourself well with it, no need to wonder.

Don't question it, for the walls that confine you have eyes fourfold.

Why, bit tired now, aren't we?
Rest easy, and only wake up when you should.

I'm sure you've earned it. 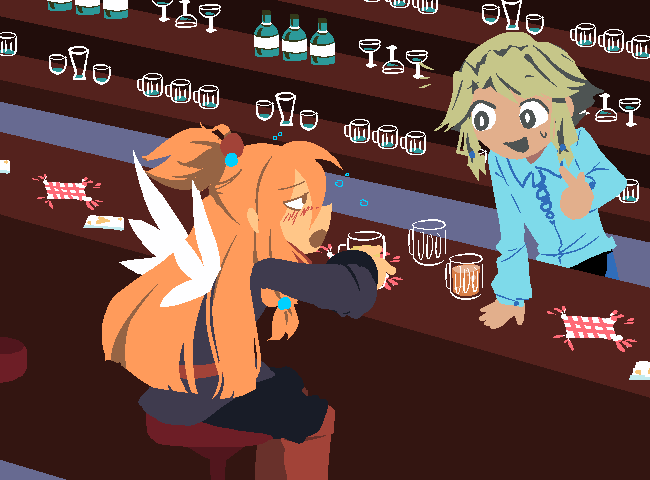 HEY, says the barkeep out of nowhere.

What in the HUMAN HELL, you accidentally instinctively shout.

That got you wide awake by surprise! It was such a surprise, that you totally lost track of your thoughts. What were you even thinking about? God, your head seriously hurts, and trying to think about why that's the case just hurts even more.

Thankfully, a little more rum can fix a headache.

The barkeep speaks up again, but quieter this time. He kindly asks you to not sleep on the front counter. He says this is what entering customers first see, and your delirious drunken self is the last thing that should be welcoming anyone in. He pauses, and then reaffirms: You are simply a bad look for business. No offense, though!

You say oh, none taken, and you politely apologize for your actions.

And just for a moment, he's taken aback by that genuine response, considering it's from you of all people. You don't notice it, though. Old habits die hard.

Your eyelids still feel so heavy.
You guess you'll find a better seat to sleep in!

text in the letter:

dear kaji pyxis,
every day, i thank the heavens for
bringing about a miracle such as you.
if not for that miracle, i am sure the
sea's children would have remained lost.
you are a treasure made to be cherished.,
the protector of seas is a title fit for
none other than you.
your guidance brought us light again.
thank you for everything you do.
may these feelings reach you, and brighten
your day just as you always brighten mine.

I really appreciate the translation. This would have taken forever to work out on my own, even with so many of the letters vaguely resembling their English counterparts.

Drunken Kaji: Hey buddy! Wanna have nightmares, cry and be distracted! And most of all, be a disappointment to the sea patrol!

Aaaaaaa I spent the last week catching up and I just did!!!!!!! this story is fantastic and intriging and it's so ambitious and I adore it. I'm oh so curious on where thisll lead!!!!

Reed: be aware of Nino

It isn't a meta command, being aware of the existance of someone is completely normal

certified as a bop. i will be recommending this fanventure to my friends.

Very glad to hear it!!

Is the comic dead?

It is not, life is just getting in the way but I will be updating as soon as I'm able to. (Hopefully soon!)

Cant wait for the next update, love the comic!

Author
nights
Reply to  Nobody

That is completely fair and intentional, friend.