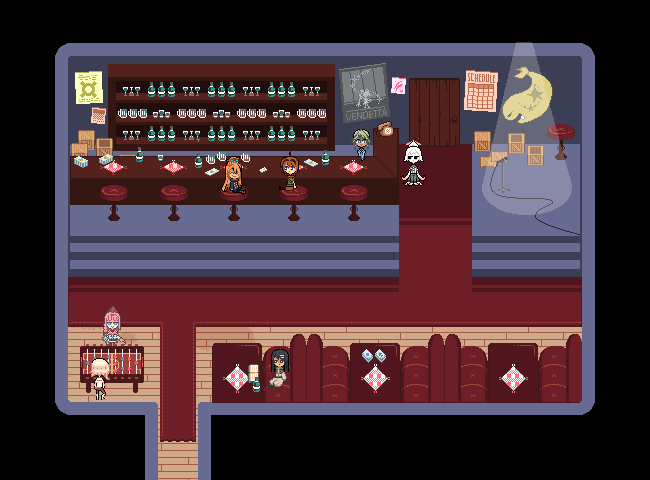 Nino: Examine note's other side. 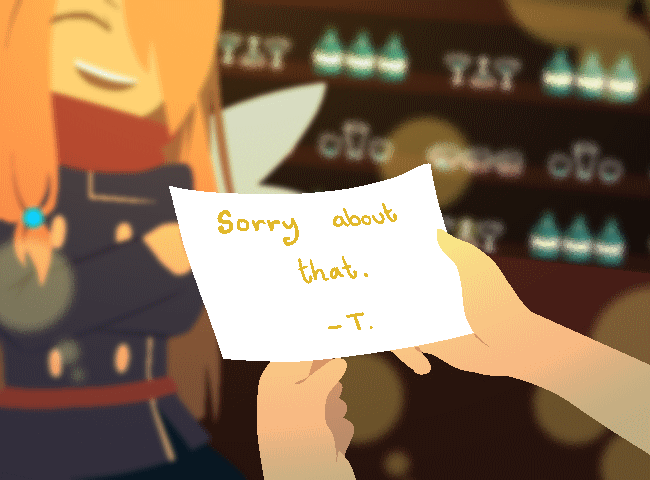 It's the Unpleasant/Apologetic Note.
You found this in the monster world, and that's as far as you can recall.

It has always looked like this, and it always will.

...Huh, what?
Your thoughts feel a bit jumbled.
But nothing is weird here, right? That's all that matters.

Nino: Listen to him quietly. 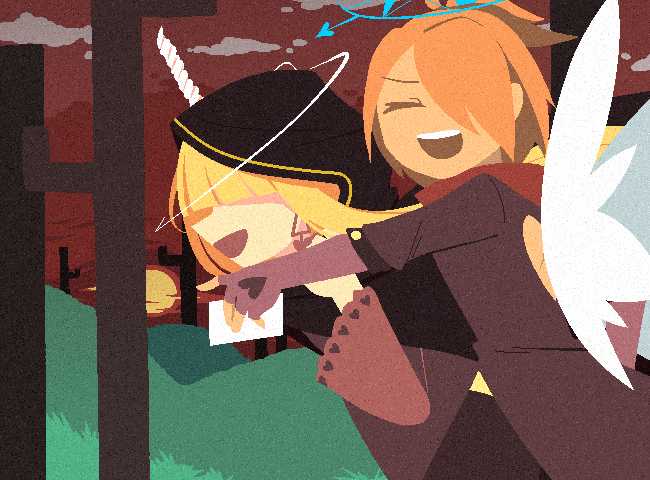 Without any hesitation, Kaji tells you about his old best friend.

She is the current queen.

Hold on, former best friends with the queen!?
What the hell kind of brag is that!?

And somehow, that's not the most unbelievable part in his story, nor is it the fact that he talks like a bumbling oaf for someone who was once standing by the side of the most important person in the world (probably), at some point in his past.

What's unbelievable is the way he talks about that queen. In books, she has never been described as anything less than perfect, but for once, this being who seemed like an emotionless force of nature was made to sound like a regular person.

A curious person who loved fun, hated studying, and was rather smart yet scatterbrained, unlike what any record says about her.

Just a girl who dressed inconspicuously in order to sneak out and play... why, she sounds more like a funny child than a proper monarch! Really, this is supposed to be the ultimate Ruler of The Entire Whole Everything around you? Is Kaji trying to shatter your worldview in record-time, or what?

You wonder if it's just that historical records and public images tend to depersonalize rulers, or if the queen had simply grown up to be an entirely different person from how Kaji knew her in those days.

Kaji: Reminiscence those fond memories of the note. 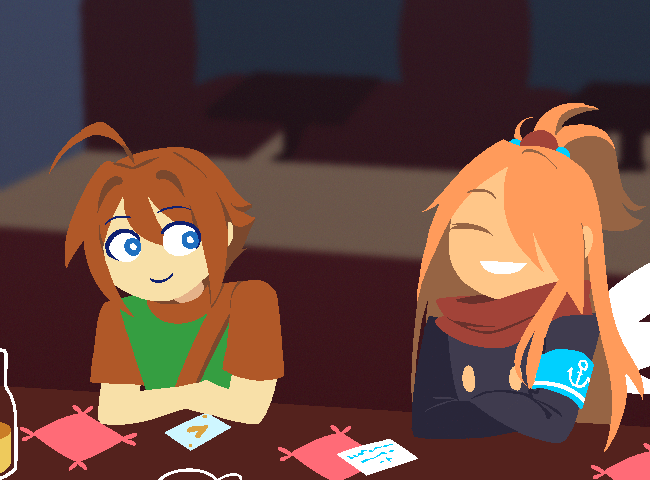 Nino: Let him keep the two-sided note if he truly wishes for it. 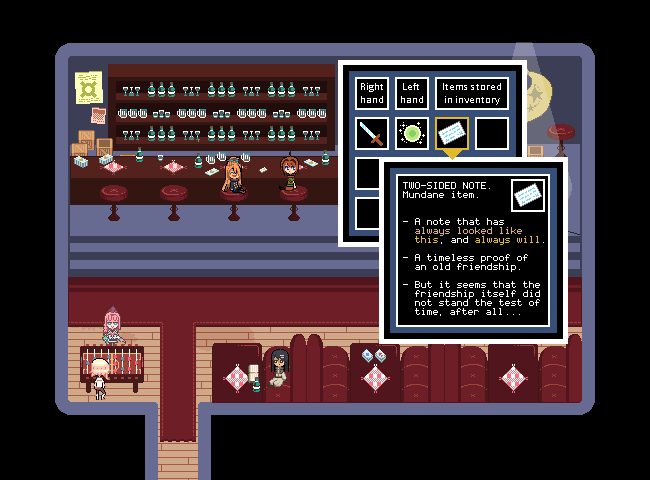 Nino: Recall that Kaji might know about memory-recovering methods. 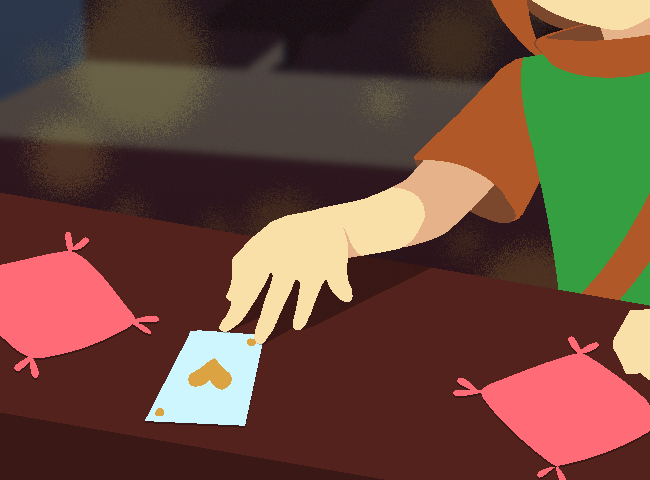 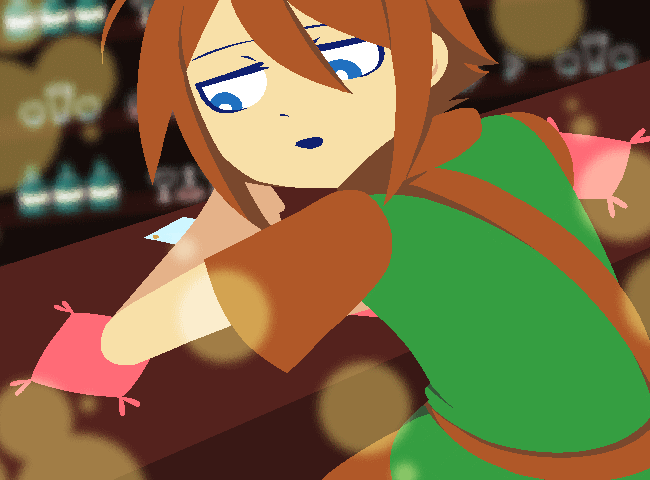 You notice that Kaji has completely dropped the accent.
He leaves his drinks unattended, and completely turns his attention to your topic.

He seems to be taking this very seriously. 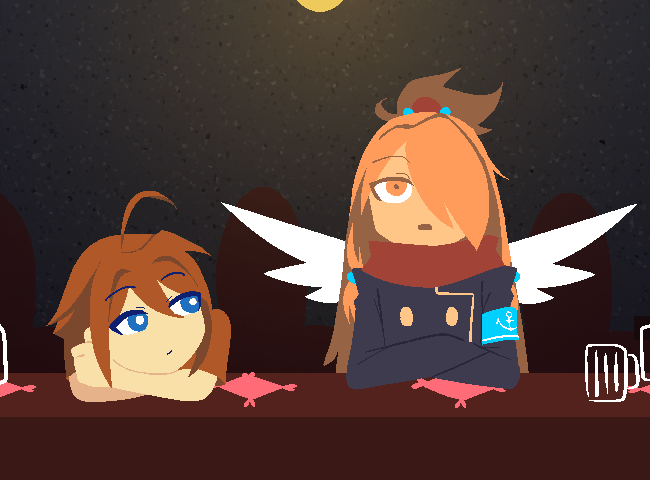 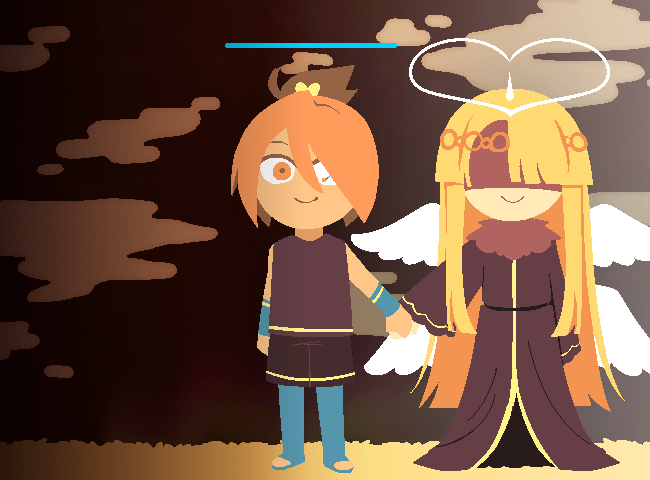 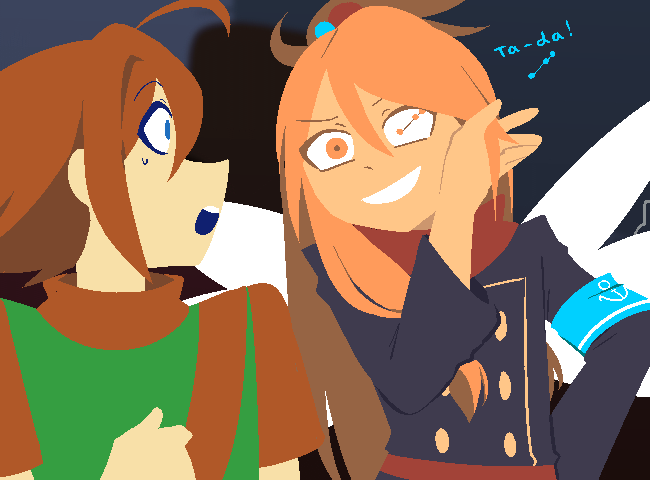 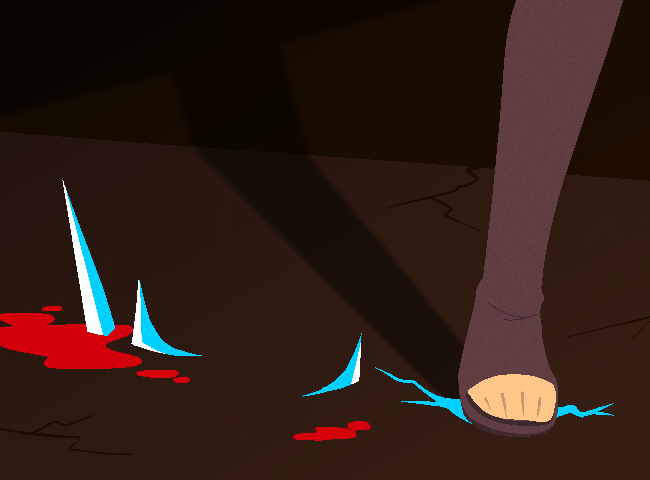 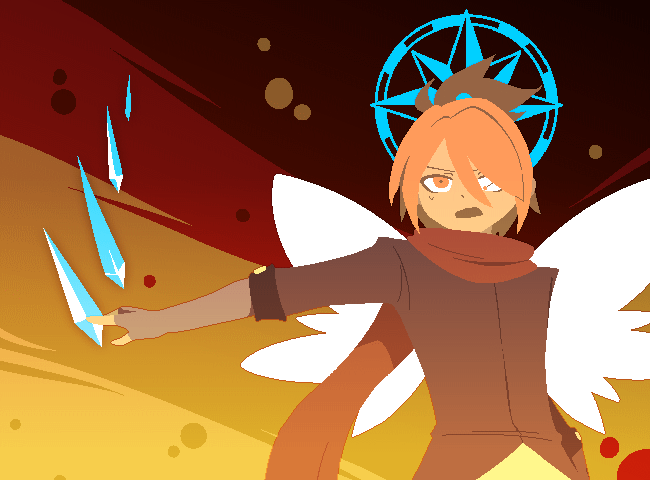 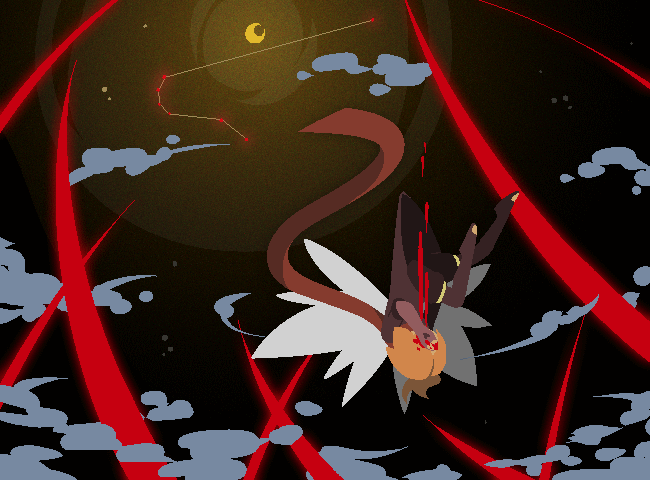 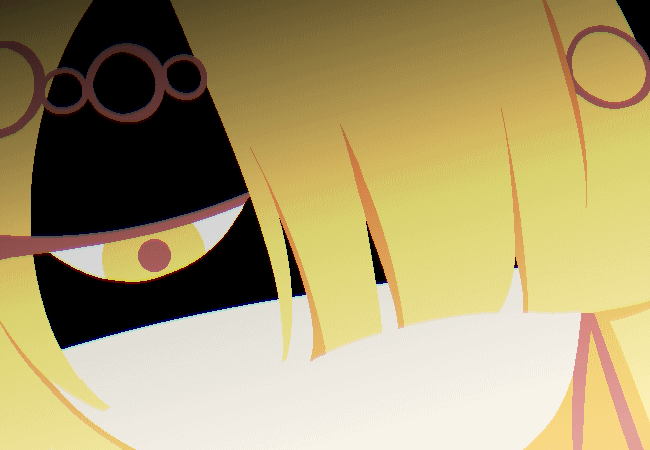 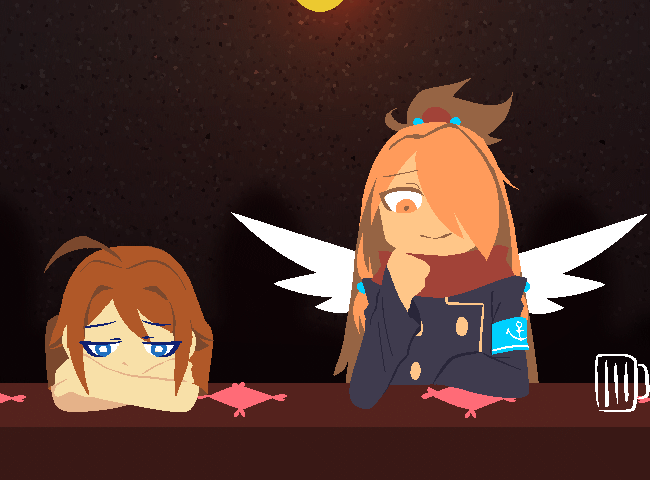 Nino: He's right. Not on everything, but on many matters.
Subscribe
Login
15 Comments
Oldest
Newest Most Voted
Inline Feedbacks
View all comments

I really like this update! Something about this interaction between the two is heartfelt and nice to see and improved my perception of Nino and Kaji, especially since Nino turned more and more of a stereotype / really exaggerated and unrealistic person that always overreacts to stuff in a way I disliked for me the last few times I checked out the updates!

Ooh, that's delightful to hear! I am glad if the character direction is likeable.
I'd say Nino's got a lot of growing up to do, and you're seeing him realize something about it for the first time here thanks to Kaji's presence. He definitely wasn't fond of acknowledging weakness, and wasn't without his moments of immature pridefulness getting in the way of things. But here, he's been hit with something new at an unanticipated time, to make him think more realistically about himself.

...He's right. Not on everything, but on many matters. You don't have the mightiest skill in your hands. At least, nothing as great as sure guidance/improbable luck. (Strange how both of their abilities are similar and different). But you are not a bad man at heart or soul, no matter what you lose. You protected yourself and you save those around you, like your new allies. You are not completely yourself without memories, but you can find some shreds of life in your heart and choices. You were competent enough to assist a friend with your mind, and a stop a foe with your power and speed. You can gauge capabilities and carry a sword. You seem to be a bit prideful, as seen by how you underestimate Kaji and others, and doubt facts such as the more esoteric winged abilities. And perhaps sentimental, keeping trinkets such as notes, and a kind enough heart for your ability to manifest in helping others. You will always be Nino. Now help a new friend by telling him who he helped.

I just gained a lot of respect for Kaji in these past few updates.

Valuing friendship over duty and acting accordingly even if it costs one dearly can also be a form of guidance. Guiding by example. Guiding through personal sacrifice.

It may not have been a literal fulfillment of Kaji's purpose but from what little we've heard it sounds like it was a fulfillment of his nature. And I'm guessing those two are not often in conflict for a winged, or at least that they're not supposed to be.

And if the queen was so keen on observing and learning about the worlds of humans and monsters in the past... perhaps she's still watching and keeping an eye on Kaji down here too, at least occasionally. And just by living right by himself in the human world Kaji can guide her still. Not the same guidance, not through visually seeing the right path, but by discerning what's the right choice to make through wisdom, empathy and experience.

You are right in that the nature of a winged tends to eventually fall in line with the purpose of their creation. Meimona explains this effect here: https://oceanfalls.net/p/4338.

The most important part in what Mei says is to not see this process as a strict constriction of a winged's freedom and future, but as a supplementation to their eventual nature. Even though the wishes that create a winged and the titles given to them are self-fulfilling, the winged will often fulfill those purposes through actions compatible with their nature.

For a title as vague as "angel of guidance", there's many ways one could end up guiding others! So Kaji might not be a failure as a guide in our eyes, but his misfortune came from the queen's disapproval. Such external control runs contrary to a winged's intrinsic freedom in how they fulfill their purposes.

so is the color change a retcon due to not finalizing the queen's design and thus her writing color? or is this something more story related because if so i find that a bit terrifying.

No such thing as an actual retcon on my part here.
What you see is what's there, what's currently happening in the story universe around the characters!

I was thinking "guide" was color coded (and it seems the queen wanted a guide but in the moment where Kaji stabbed their eye, being a friend seemed to conflict with being a guide), and since "With it, I could simply and literally see which path was the right one for the queen to take, in order to achieve any goals she desires at a given moment." and it mentions how it was any goal she desired at the moment, the reason Kaji stabbed his guide eye is because it was because the queen wanted something that would result in something bad happening to the queen which conflicted with Kaji's friendship with the queen, then I went back and read "Her heart had love for others, but none for herself.".

But there's also images of them smiling with a shaded face, giving a much more sinister atmosphere, among a few other things. Is it just representing Kaji's memory? (About to hit character limit shoot)

Also, especially with the recent intermission, the queen clearly represents hearts, but even the rulers of the Humans and Monsters seem to not have their own dedicated symbol (I don't know the term or the name of the card game), is the queen special? Not even an actual winged? Or are they so far above everyone else in some way, they are considered to be about as much a force of change as an entire advanced sapient species?
Are there bits of exposition I either missed or forgot that explain all of this?

Not sure if you missed it or I misread you, but the queen herself is not a winged. She is a Celestial: https://oceanfalls.net/p/4978 (just ctrl+f/search the name to find quick info on the page).
"There can be only one celestial at a time", living up to 500 years. The entire species is represented only by the current monarch. Safe to say that she's the *most* special.

The visuals in Kaji's story and dreams about the queen always represent only his own memories, his interpretations, and his point of view. The only time the queen was directly shown, through nobody's lens, is in the intro of {s} Shatter.

Also, I probably should have mentioned this, but there was a period of time where I just didn't read this webcomic, forgot how long but I've probably forgotten key details and I should probably reread Oceanfalls at some point.

This is the first time I've seen a media portray lost memories, not as some other person entirely, but as the same person with a different world view. The separate person thing has annoyed me for so long- My respect for Kaji has exploded, I am in love with the pirate lad.