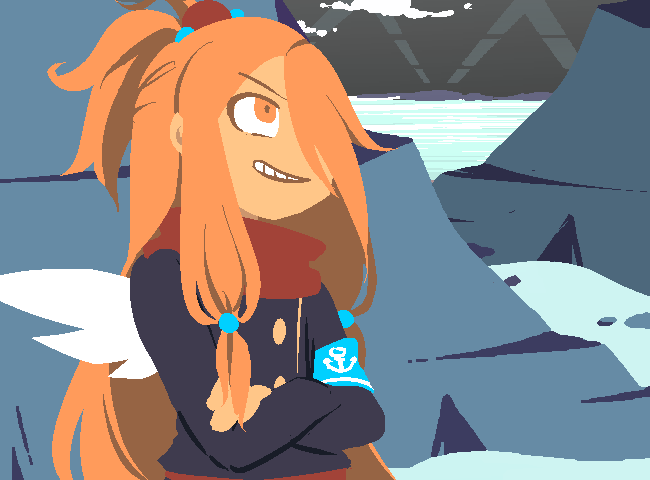 Nah, you've got this! You're not worried.
You're worth at least FOUR people by your own!

Not literally though; you're not like a certain royal superior of yours.

Kaji: Make a DRAMATIC ENTRY and catch them off-guard! 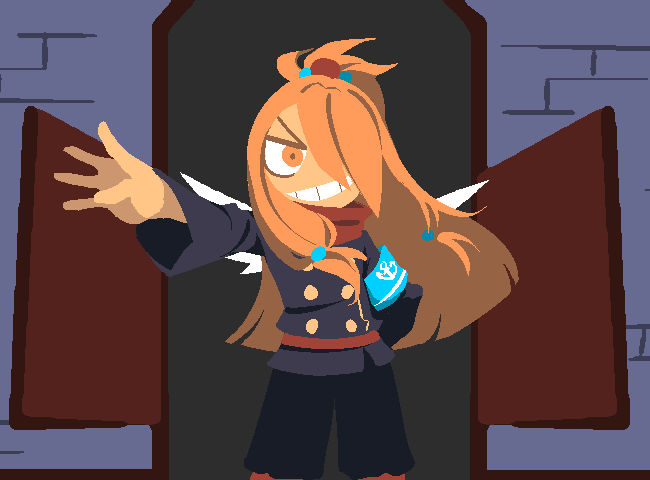 You then declare some TRUE FACTS as loudly as you can:

These kids aren't getting past you! 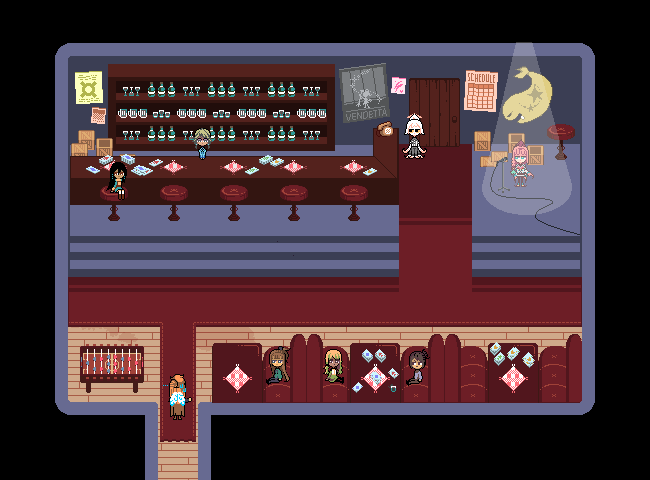 Unfortunately, the dastardly criminals are nowhere to be seen, and now you've just caused a huge ruckus for no reason. You've even interrupted an open-mic talent with your boisterousness.

O-oh well! Mistakes happen! Pardon the gallus presence, patrons!
You're choosing to move right past this embarrassment and not dwell on it for a second!

It's probably going in the good old "Things to think about and shudder in bed before sleeping" part of your memories, but that's all for later.

Focus on the here and now!

You ought to ask the good barkeep about those two kids. 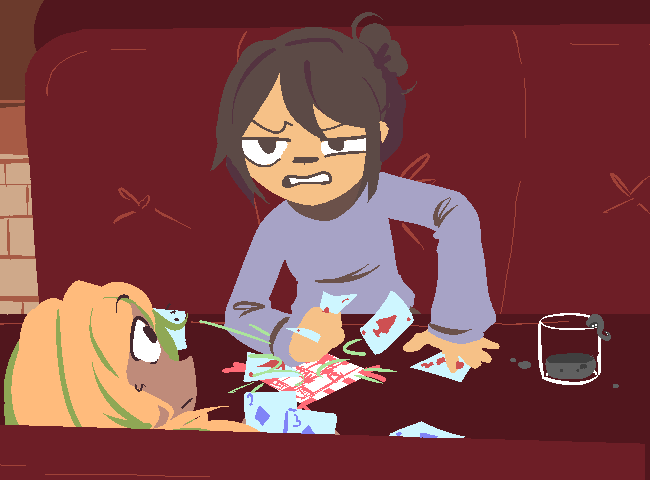 But it seems you're not getting off scot-free for your stunt.
You've ticked off the wrong grumpy customer.

The lady is clearly not happy in the slightest, her card game's been interrupted. She grumbles in your direction.

So you're still failin' at stoppin' that phantom thief, she says.

No surprise there, her friend was just talkin' about the robbery on her store, she says. And now you're here to get uselessly drunk instead of doin' any of your work, she says.

You've got to be kiddin', you pathetic dam'n flightless brat. 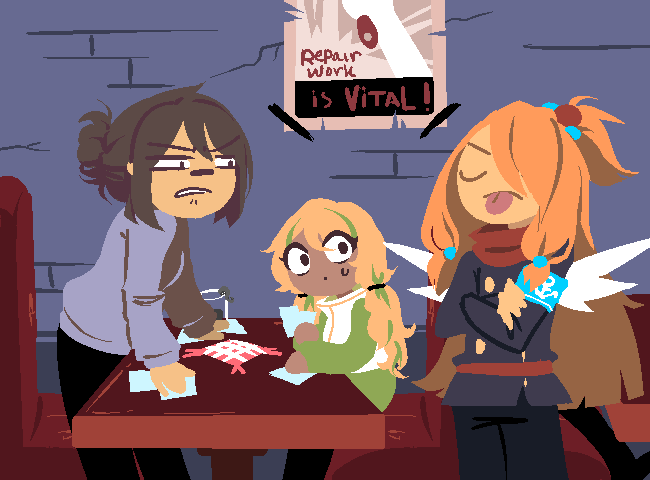 You'll have her know, you are in fact here for a JOB, you say.

The culprit came right into this fine establishment, and so you're here, chasing right behind! Look at how dutiful you are. One can only hope to be as responsible as you.

You also inform her that it's a weekday, not a weekend. In fact, you believe this is a time of evening where most citizens in this little island should be busy with their respective jobs... So SHE'S the one slacking off of a job and drinking while playing STUPID card games that she probably REALLY sucks at.

And then you stick your tongue out for good measure. That'll do!

She says, I don't got a job, and need I remind you whose fault it is I'm out of a job. What, you say. She says if only we'd've got someone to catch the thief, then she'd still have any wares to sell at all.

Real pity that we don't though, she says.

You better get out of her sight before she snaps, she says.

You don't say anything.
But you don't plan on leaving either. 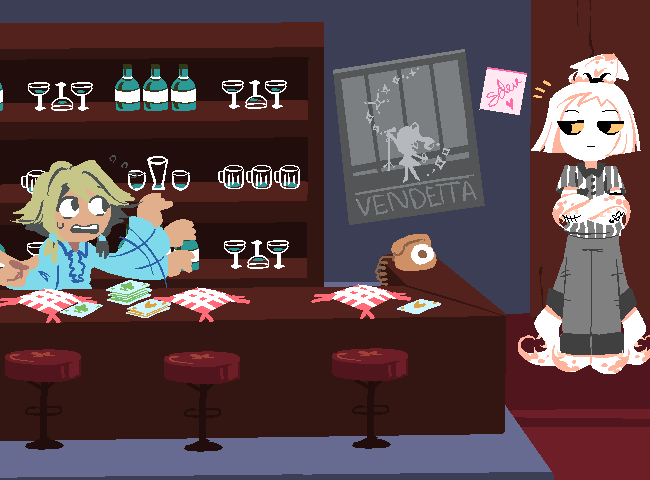 Nope. Fortunately for you, the good barkeep takes no sides.
Right away, he calls for some appointed sea-muscle to stop a possible fight from breaking out! 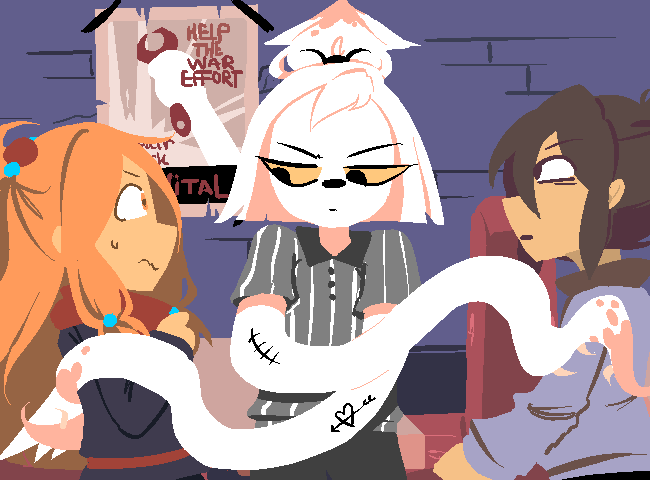 And yet, unfortunately for you, Onyx the squid-bouncer informs you that they take no sides either. Just because you lead THE Sea Patrol doesn't mean you get special permissions at all. You're out of here.

You plead for mercy, the grumpy stupid lady started it! You only responded!
Onyx reminds you that you started it by disturbing the quiet atmosphere of the establishment. FUCK, you say.

The lady doesn't know what's going on because you're the only one here who understands the seafolk. Nevertheless, Onyx is not throwing HER out, and that offends you.

And yet again, fortune seems to strikes your way. The good barkeep interrupts again. 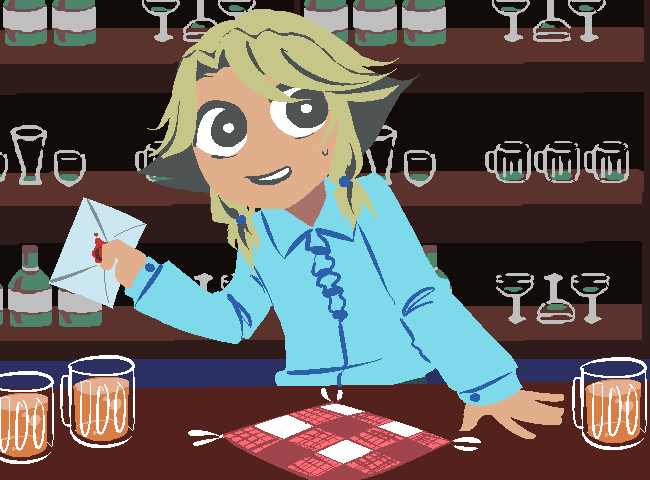 The barkeep says, neither of you are going out!

Oh, how good is the barkeep! Always saving you out of a pinch!

He says he will only have peace in this fine, fine establishment, so you've both been excused as long as you behave. While you're glad for the special treatment, you can't say you feel the same for the dumb grumpy lady. She's probably thinking the same towards you right now.

The barkeep says he has something for you.

What, you say. Three shots of the bar's very own moonrise rum, he says! But... You didn't order anything, you say. He says oh, but someone did!

They said they were a HUGE fan of you, and they even left a personal letter to be delivered alongside the drinks, he says.

And then, in the highest pitches possible for your vocal chords, you say... 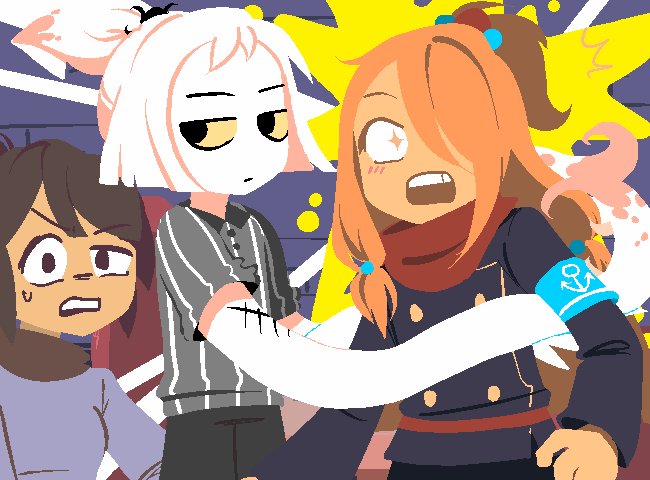 Designs in this update:

Its me. I'm Kaji's biggest fan

ill fight you for it

Kaji:Play it cool dude! Act like this is natural and the fans will be flocking to you in no time!

And while you’re at it read the letter they left you.