A beautiful princess who had distinct deep blue eyes that glittered like the ocean itself. She was a refined lady who donned a VERY fancy dress. Whenever Five sees her, Five thinks of hydrangea flowers. Sometimes, that princess brought a young prince-to-be with her, but not always. He was often busy with training and lessons, as is the norm for one of royal lineage. The prince-to-be reminded Five of meadow-rues.

Many other visitors were there, too. Guard and friend played a strange game of kings and pawns together. The sight made Five think of a vase holding an orchid and a sunflower at once. Doctors monitored the place and talked using very confusing words, but Five is sure those words were all good words! They didn't frown when they said them.

Rather, they were smiling. They said that they're very happy with Five's recovery. They said that Five reminded them of their children. They called Five a beacon of hope for the future! Five liked that, even if Five didn't understand why they said it. The doctors made Five think of a bouquet of gardenia flowers.

And there was also someone very special there. Not a guest, but someone who's always there.

Five wanted to give her a present.

Five: What's happening with you and Ludwig? 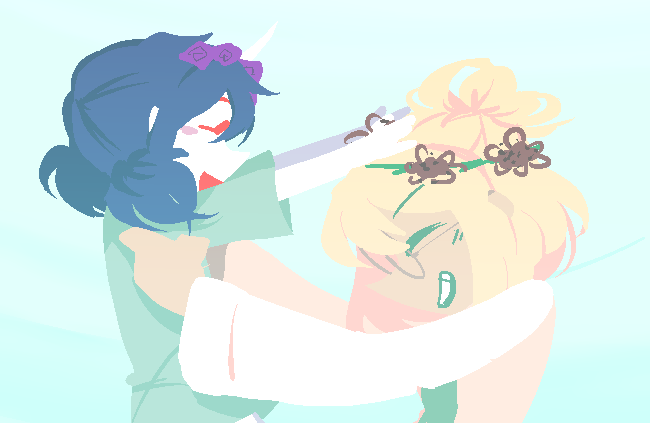 What's a Ludwig? Five is busy!!

Five bestows the present upon her friend. The friend whom Five calls "sis". She is everyone's sister, she loved- loves, she LOVES, present tense, she loves everyone and everyone loves her. Sis said thank you Five and Five laughed- laughs, present tense, laughs and sis laughs and they all laughs laughing and laughing and laughing present continuous tense, nothing is in the past.

Five and everyone had- has, has so much fun and the fun never ends and nothing terrible happens. Five didn't sleep and wake up to everyone being gone no the friends never left Five it never happened they were- are, are always always together and Friend never hurt Five.

There was no monster prince to tell Friend to be mean to Five and there was no fire in Five's home and nobody was missing everything was fine- is fine, all is fine and continues to be fine.

Five doesn't want to wake up.