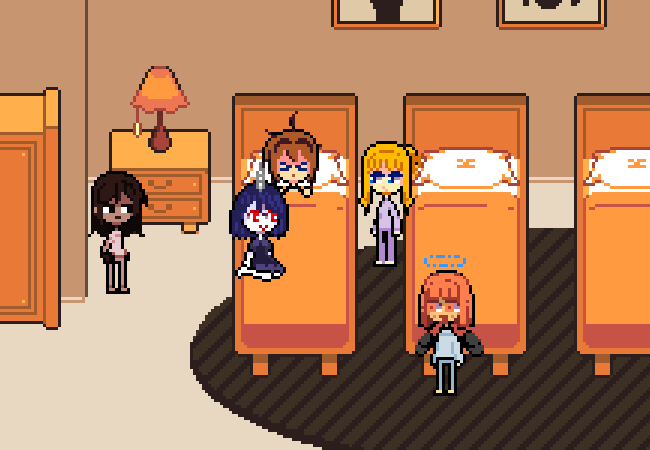 Nino: Kindly ask Five to not do that again. 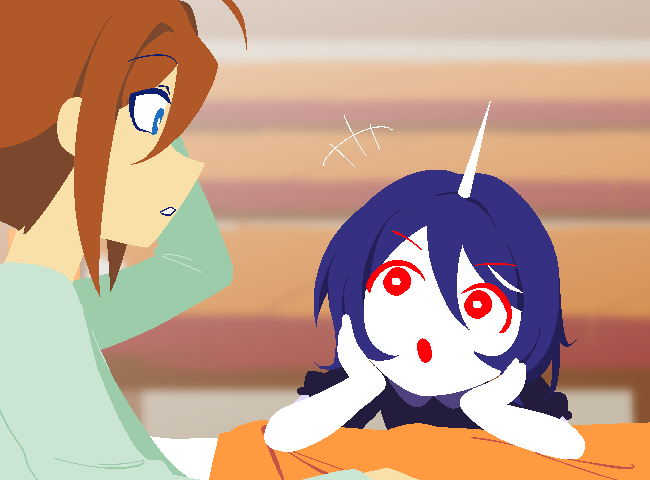 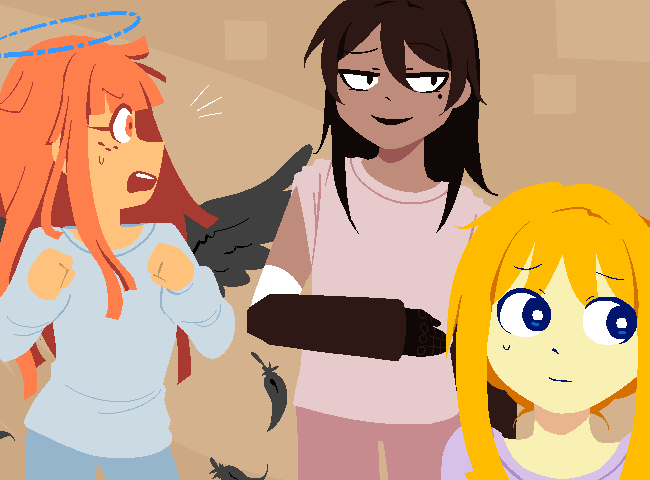 In your dream...
Those three were there too, weren't they?

Nino: Do you recall your dream at all? 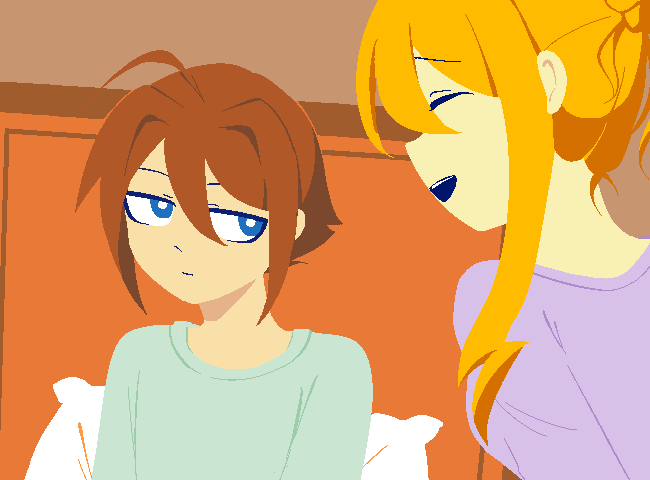 That was a lie.
Yes, you do remember it very well.

But it is something far too strange to share. Saying you "don't remember" is much easier, and is obviously much more believable to these guys.

You silently wonder how much importance you should give to what was in it.

What you saw was... interesting. In your dream, who was that?
It's too easy to say it's you, just because of his appearance. And although he did share your memories and capabilities, something about him... 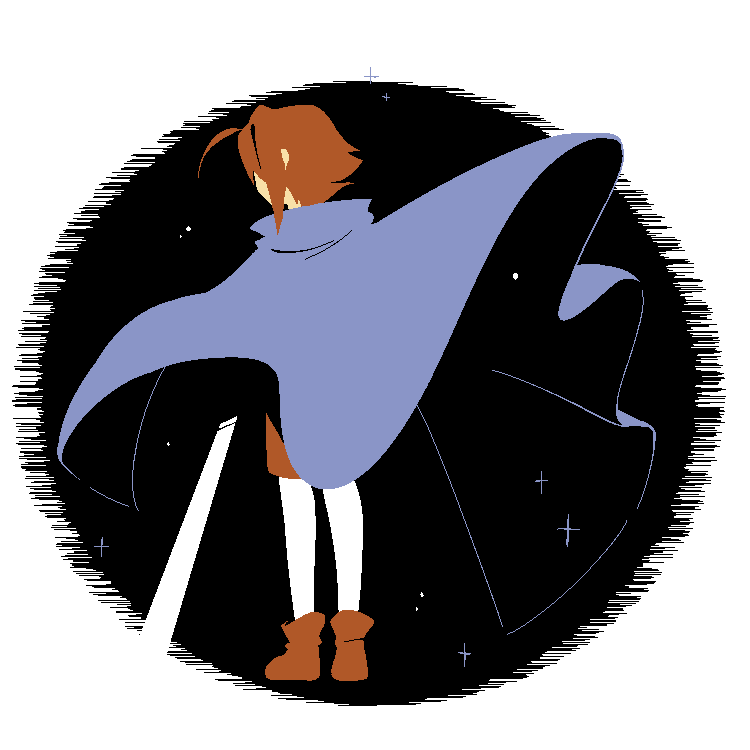 Of course, you're not letting whatever he is order you around as he likes. No one controls your actions besides yourself.

But ultimately, he has proved one thing to you.
You both can agree on how valuable your lost memories are. 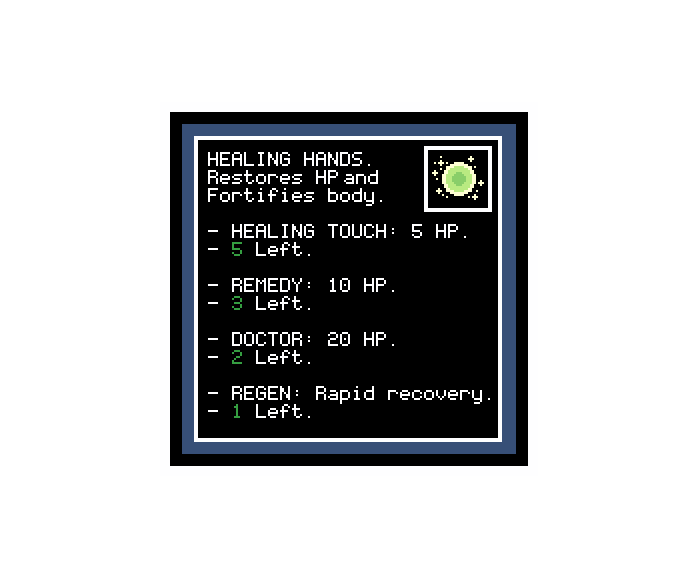 Indeed, your ability does work in the way he's made you recall.

It looks like you've recharged the amount of healing you can do, with just one good(?) night's sleep! Although you had a weird dream, your body feels well-rested.

So if you run out of healing... you'll need to rest again, huh.

Nino: Ponder what that... thing, said. 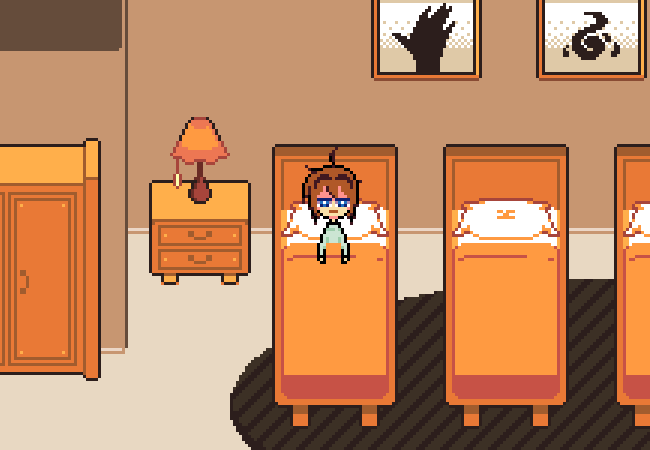 Your dream, and what you've heard...
Well, it tells you that you probably do not have anything, or anyone to go back to, so to speak. That there is nothing, and nobody in this world who is waiting for you.
Which is... perfectly fine, of course.

And that concerns your "source".

If, somewhere in this world, you had a safe home, with all basic necessities filled... then why did you leave it? What does the monster world have to offer, that you'd depart from safety for? If this world was so unimportant that you'd leave it without a care, then it wasn't really home.

Nino: If that Phantom really was you, then are you really sure you want to remember? 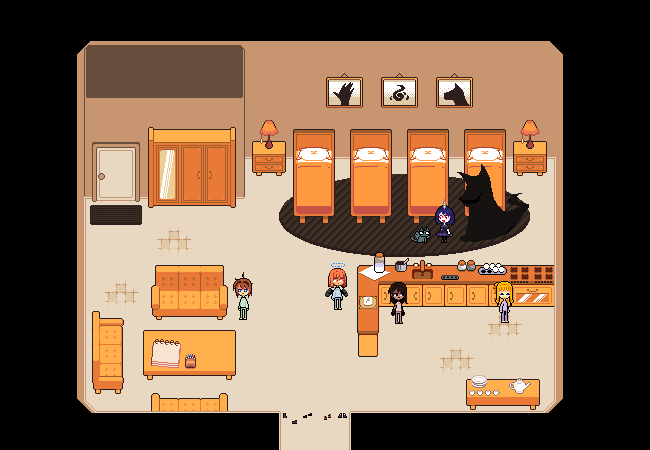 Of course you do.

If the "source" doesn't matter, then the only thing that does is your "destination". You have to get there, to regain your memories, and get back on track.

The "you" in your dream isn't wrong about that part. If there's one thing he's gotten right, it's that you were distracted by everyone else from the most important goal - your memories.

What you must do now is set off towards recovering them.

So, it's back to the drawing board.

Nino: But Kaji did say you could lose yourself if your memories turn out to be undesirable. 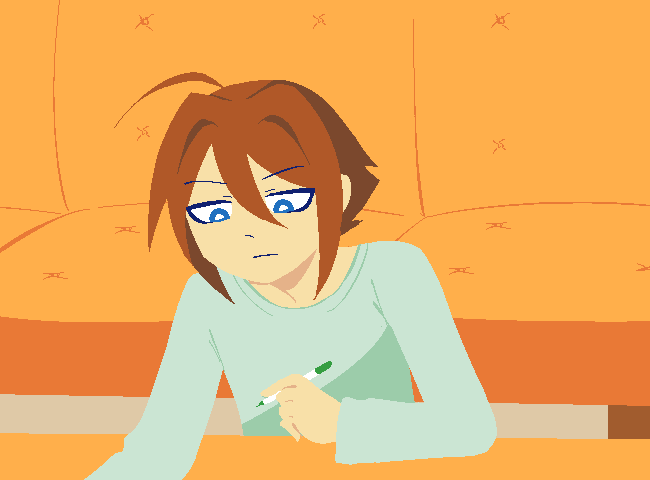 Sure he did, but so what?
What does Kaji know about you, after all?

Spoilers, the answer is nothing.

Only you know yourself, and you don't want to lose your trust in that fact.

Giving up on moving forward isn't your style.

Nino: Why aren't you listening? 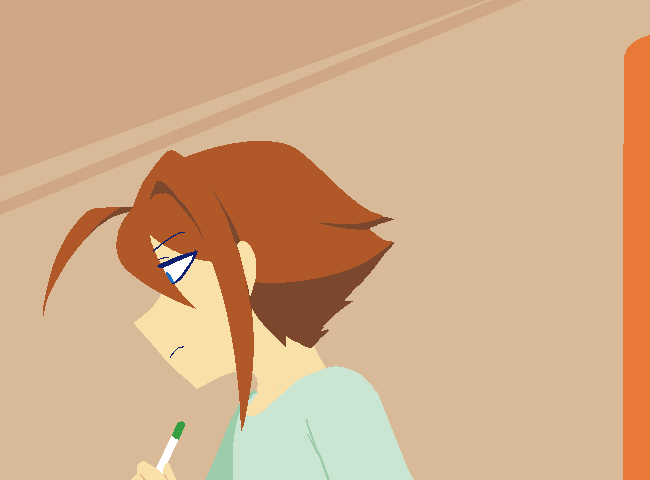 Huh? Hey, focus on what matters!

Kaji is irrelevant, so pipe down already!
You're not obligated to do anything besides what helps you.

Focus on what matters!

Nino: Who knows what you will have whenever the end comes. It's naïve to pretend that you'd know. But right now, it is far more naïve to believe you "only have yourself". 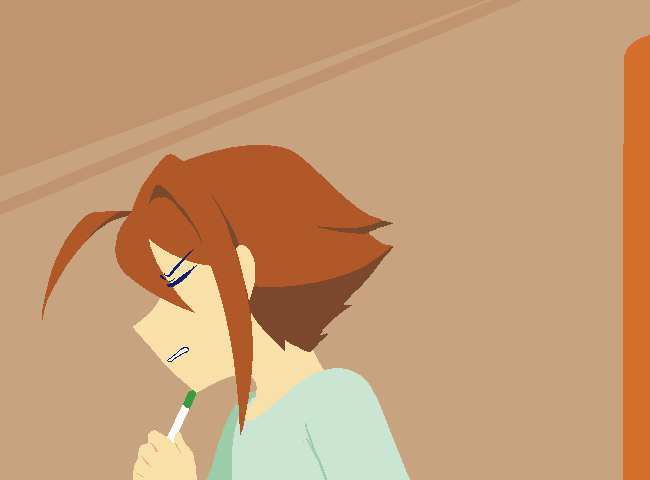 What's the deal with all these annoying thoughts!?
Look, you're not ignoring the others, but your goals do not entirely match up.

Thanks to them, you've gotten quite distracted from the fact that a part of you is missing. To make things worse, this started becoming your 'normal' state in their eyes. This incomplete you is what everyone else has accepted.

But as long as you know there's a way towards becoming whole...
You are not giving up on it.

In the end, why should their goals matter more than yours? 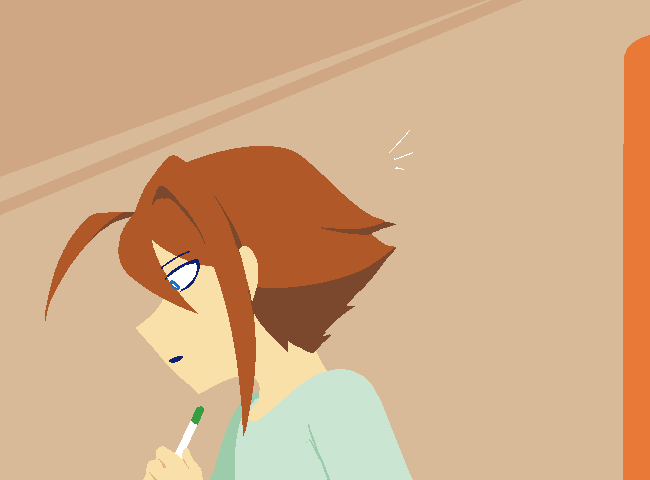 Aria: Check up on Nino. 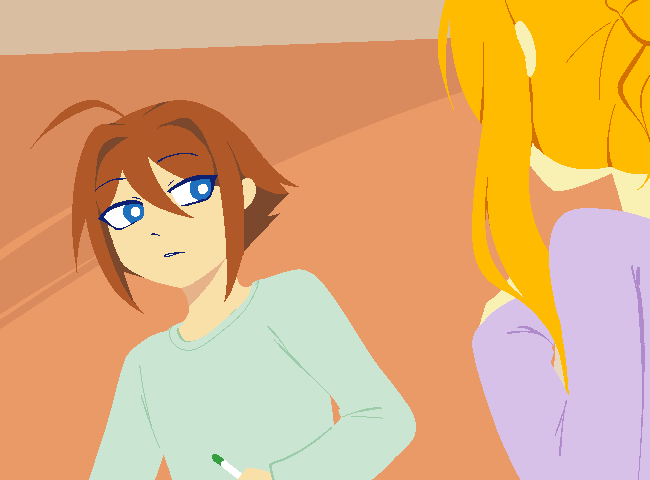 Oh. It's just Aria, huh.
Of course she'd go out of her way, apologizing on others' behalf like this.

Come to think of it. 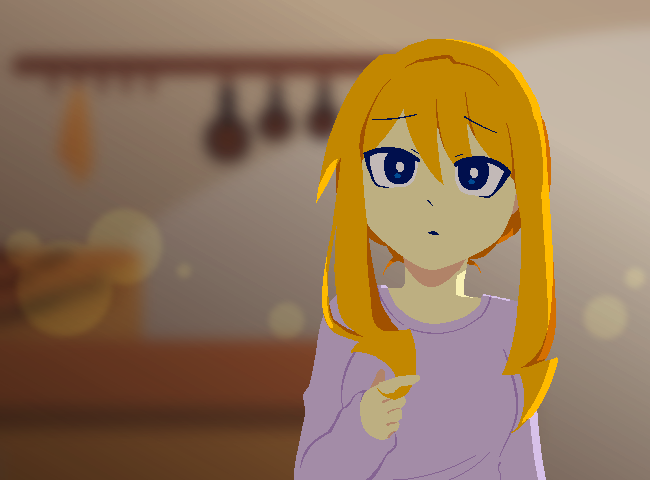 If your goal is in the monster world, then she's the most important person here.
...But to ask her to accompany you would be an incredibly tall order.

Just imagining how it will go sounds very ridiculous already.

"Hey, I know you've finally found your way to the world of humans, and barely escaped the danger of monsterkind, but how about we just waltz right back in there? I have something I urgently need to remember, you see."

Yeah, Aria is nice, but she's not that nice.
You'll need a different approach. Being straightforward won't do you any favors. 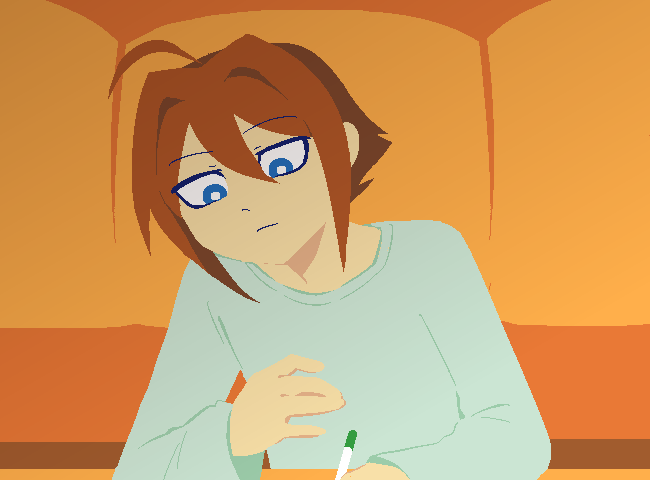 With those mysterious statements, she scurries off.

Man, these guys sure have nothing to worry about.

Should you be envious of their ignorance, or thankful that you've woken up from yours?
Regardless, you have a lot to think about.

For now, you'll let them mess about as they like. There should be no interruptions if they're busying themselves away.

Aria: Return to the group. 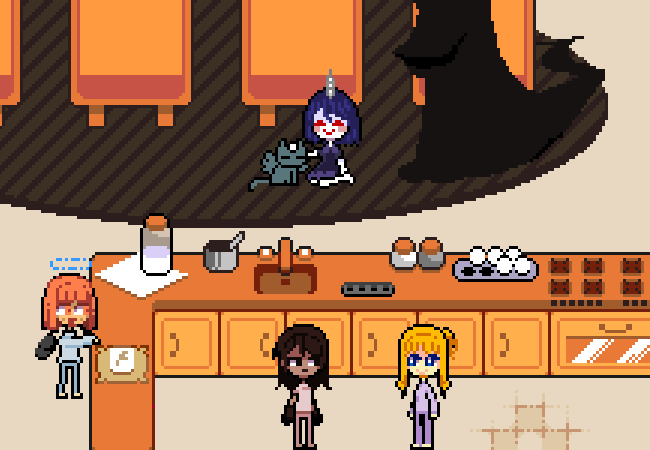 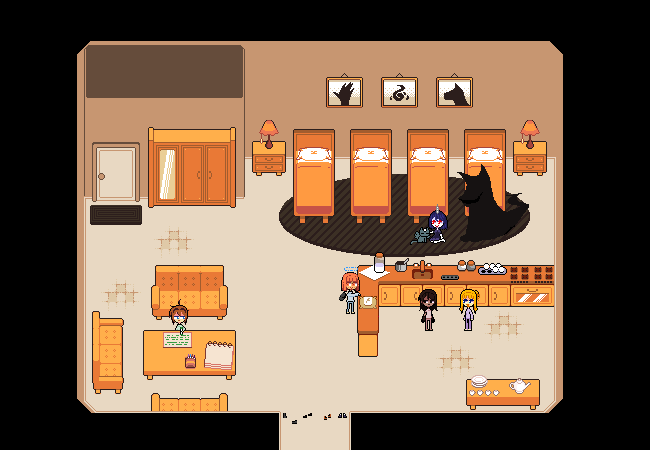 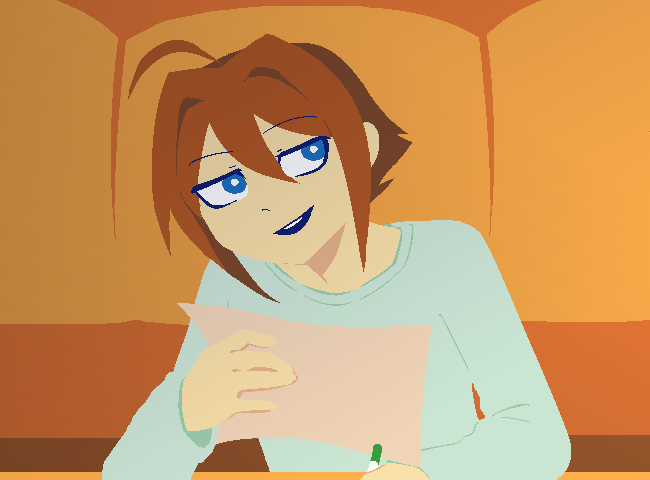 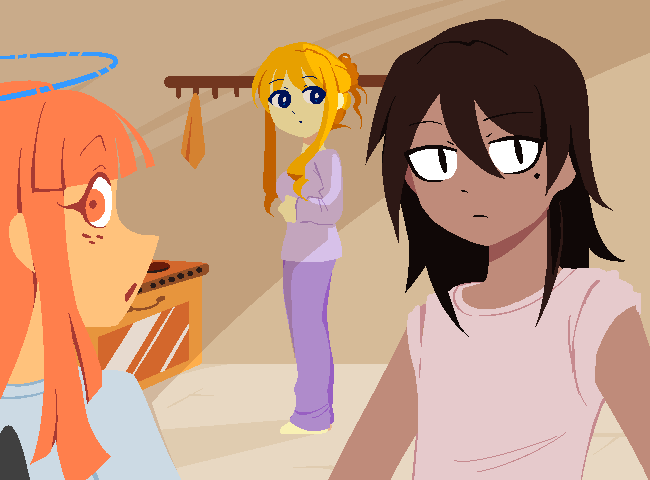 Hello! Next week will be my first attempt at two-updates in one week! So the next update is in 3 days next Tuesday if all goes well, and then again on Saturday as usual. ^-^

i love this updateeee>>>>
and i can't wait for the next one>
tuesday, right?

I wonder what Nino is planning. Everything seems to point towards something dangerous…

Particularly, something dangerous that is also incredibly selfish, manipulates his newfound friends for his own gain, and could potentially get somebody killed, all just for Nino to remember shit about himself. AND HE WAS JUST MAKING PROGRESS WITH CHARACTER DEVELOPMENT GODDAMIT. Sorry for the incoming rant, but while he claims that the Phantom isn't him, and that he disagrees with it on most matters, he certainly hasn't shown it. It changed him, and not for the better. It said that Nino doesn't follow the group, but they follow him. It essentially encouraged Nino to use the group for his own… Read more »

He never said he mostly disagreed, just that they didn’t completely match up, that’s all. He thought that the phantom had some points, but that pride he tempered also made him more resistant to the phantom as well, in a way.

Also that image of, uh, Dream Nino is some good PFP material

Aria : Reveal the secrets of your muffin making recipe

Nino: Reveal your plan. Literally everyone with half a brain: Object and point out flaws in this terrible idea. Nino: Manipu- errr, persuade them. Breakfast: Be ready. Someone: Knock at the door. Aria: Does anything else seem... off, with Nino? It's evident something is on his mind. Nino: Fine then. If you're so certain of this path you're going down, go ahead and see where it takes you. When you choose to turn back, you won't be alone. Just remember: leaders have many directions for followers, but only tyrants enforce a one way street. You will understand that in time,… Read more »

Crayon eating child and selfish brat: Eat all the crayons from other people because you desire to rely on yourself only, and get one over on Aria, how dare she try to help you by making you food and restoring your memory.

Mature, reasonable, and kind person: Pet ghostly doggy along with flying kitty, Five has 10 fingers and 2 hands, Otto give them both attentions.

Is so very valuable: Take mental notes on how to create a witch out of sand.

you are a genius

Aria: Five is speaking gooder, so that’s a positive, but what if you need to decide between her safety or helping her find out what happened to her old life? Five’s also kinda acting like a younger Nino… Nino: You’re probably gonna be trying to manipulate them, but they might not agree so easily. You’re going through this plan due to not having enough time of course, but can’t you just try to make a deal with Meimona in private to make you recover your memories in like an hour or two instead of going through this complicated process? If… Read more »

Also, Nino: The plan is to use the monster world’s mirrored layout to the human world to go quicker to the capital, but wouldn’t that cause unforeseen complications in the first place? Better find a way to convince them that it’s reasonable by pretending to be on their side and that it’s a good plan, but they would be pretty desperate, so refer back to plan “Lucky Recollection”. Besides… you probably aren’t going to go to the capital while you’re in the monster world aren’t you? Not without your pure mission unfulfilled.

Oh no Nino being hit in the head repeatedly has caused even more brain damage. It seems while dreaming he spoke with his with super-ego, and with his ID/ego nowhere insight(unless "normal" nino was his ID). Well it took completely over FUCK YEAH SOCIOPATH ARC BEGINS SOON TO BE NATURAL EVIL NINO CHARACTER DEVELOPMENT is going to be awesome. Is Five going to turn out like Nina in full metal alchemist I mean ludwig is a dog. Just think Fivewig with a tear in its eye looking deeply into her face and going A-aria. Is Nino going to be based… Read more »

I think caped Nino was just the part of his past instincts that represented the whole him, but not his ID. He wasn’t able to adapt to situations like Nino, but he was smart enough to use his brains to convince Nino and get him to become more like him, while still not being pure instinct. A shadow of the past, but not the true self. Anyways, the rest of the horrifying outcomes prayed for aside, Nino’s only god whom he believes in is likely himself. Transmutation may happen, but not the “A-Aria…” type. For now, Nino still seems to… Read more »

Caped Nino would be his super-ego. Its clearly how Nino views himself as perfection, the finest noble warrior. Better than the commoner riffraff with real goals, desires, wants and needs etc etc. The normal Nino we know now would be his ID. The Nino in the beginning of oceanfalls would be his ego. Ignoring all the other retardation I posted b4 it would be neat if Nights played around with Freud/Jung's theory of the mind. With Nino healing his mind by the route of "ego death" having completely lose of self-identity(who he was and his memories are not who he… Read more »

Ah, sorry I misread that. Still, Caped Nino is very driven by both instinct and reason, considering don’t leave me, so I’d wager that he’s more of Nino’s shadow than anything else, or to be more accurate, Nino is the base psyche, a form of traits rapidly taking on a new persona based on the events around him, while caped Nino is the old persona trying to regain dominance, but accepted enough by Nino to not exactly be a shadow. The old persona regains more dominance the more memories or links to the past Nino regains, and only has a… Read more »

Nino within the cave would be similar to the ID, due to Nino basically running on mostly instinct, but it would be more likely for Nino to be in a blend of personas while in a near death state instead, due to him being more optimistic about his destiny similar the his Post-Amnesia self, while being apathetic to others, mirroring his Pre-Amnesia self. This Nino is a blend of Nino’s personas as well, obviously with his Pre-Amnesia side winning out, but with some traits from his other selves as well, being more open to social situations, even if just to… Read more »

Considering themes of body, soul, mind, and combination themselves, you probably made an good and skilled prediction considering Z. Lumen’s focus on researching and altering the bodies, minds, and souls within the world.