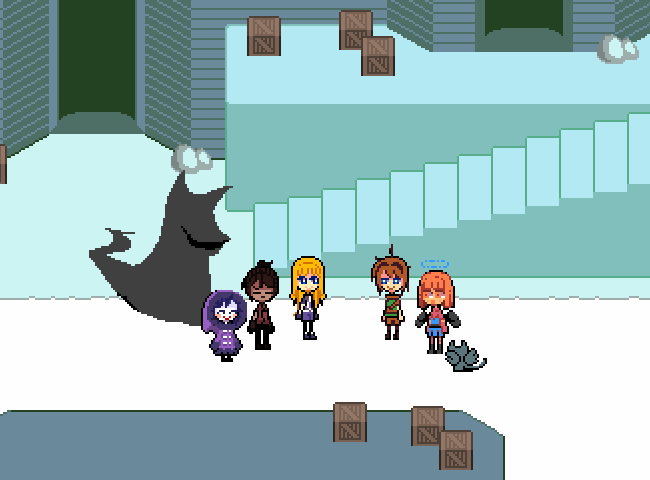 Party: Get a move on. 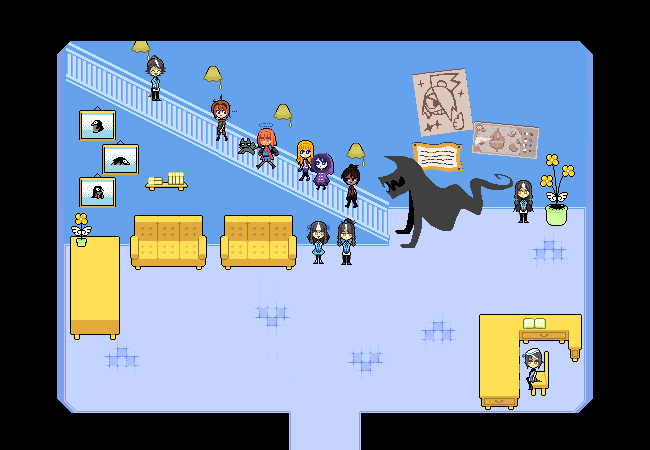 As the penguin staff kindly show you the way in, you realize just how many people, and... animal things, are following you. Oh jeez, if your mere steps can lead this many at once, then you'd better not tread around thoughtlessly.

Thank god this hotel has no policy against pets! 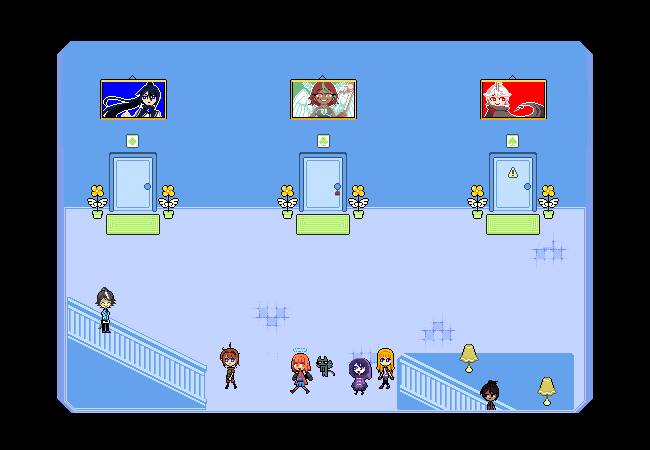 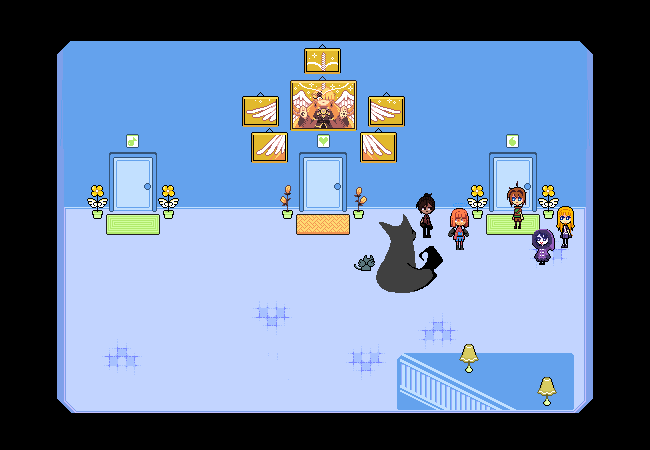 The room booked under your name is called the Soul Room, according to the staff. Since this room is usually reserved for VIP guests, its interior should reflect that status.

It seems that Kaji's connections are what allow you to use such a special place... and it looks like you're technically his neighbors now! 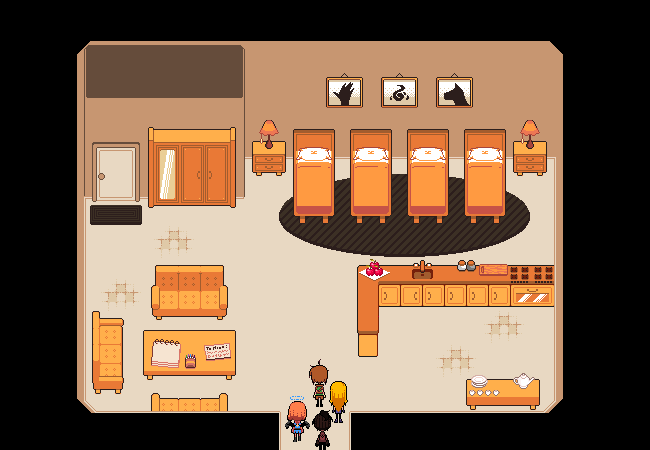 Nino: Discover the source of fruit-smell. 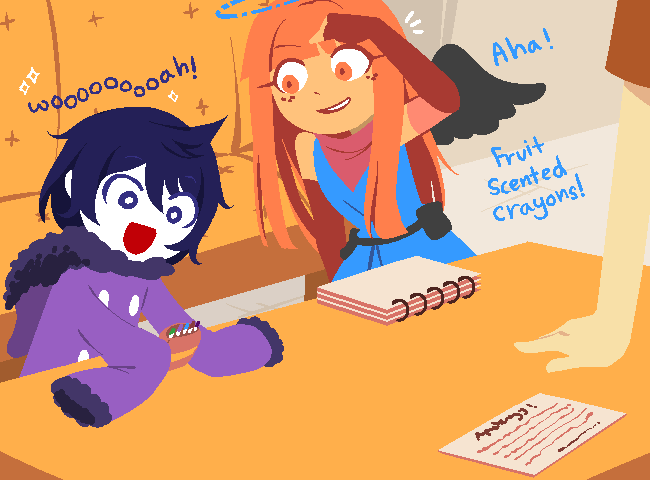 It seems that the staff have left something for you all.

Apology!
Mr. Kaji asked penguins to accommodate five individuals.
However, room has only four beds, not five.
So penguins leave gift to apologize for inconvenience.
Clients have little child, so gift is good for little child.
Penguins hope you enjoy the stay.
Call for room service if need, anytime!

Aw, how sweet of those little guys.
It looks like their well-picked gift has already taken it's intended effect, too!

This should be fine, the room's furnishings seem accommodating, and the couches here may be sufficient enough to use as an extra bed.

Either way, considering that you're getting all of this for free from these kind penguins (and Kaji)...

You have no complaints to speak of, whatsoever! 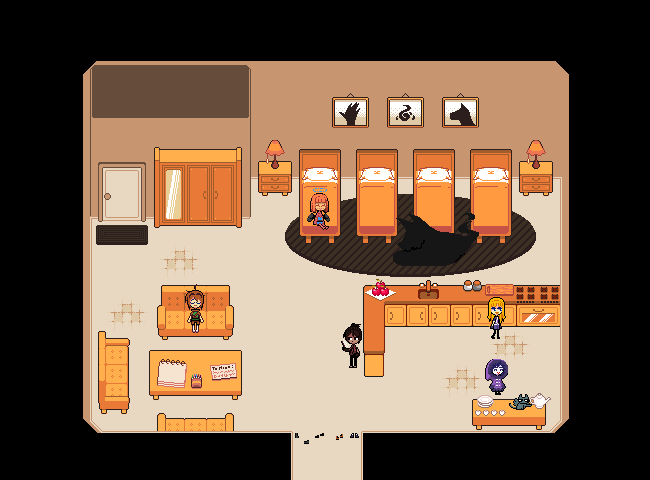 Without hesitation, your travel companions scatter to find their natural resting positions, each person busying themselves with what most interests them.

As for you, you're just gonna... sit down for a sec on the nearest spot.

Boy, what a long day this was.

Aria: Make a mental note to bake muffins for everyone the first chance you get. 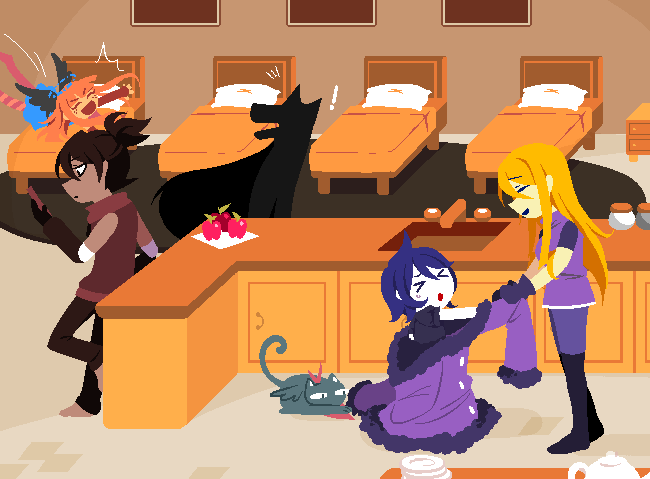 That's a good idea! Everybody must be in need of some energizing food.
And, since the only thing you gave Nino during your first meeting was muffins...

Perhaps doing this would help recover his memories somehow.

However, all baking activities will have to wait a little more for now!
There's something else you've got to figure out first.

Aria: Then, what exactly is your plan from here on out? 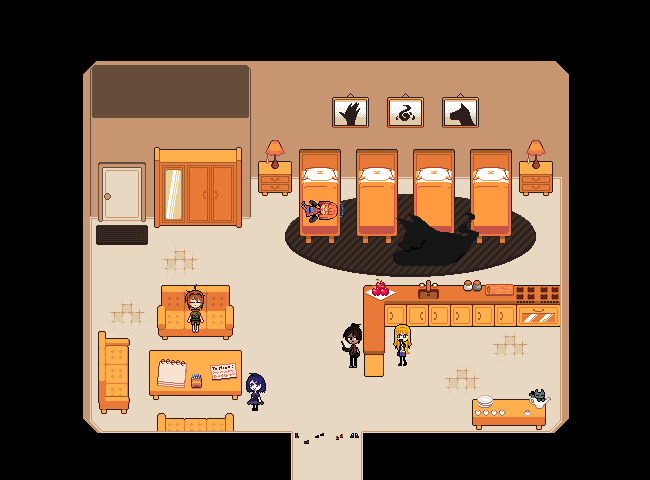 Ah, well, yes! Yes, that's what you wanted to figure out before muffin-time.
It's not like you know this world well enough to decide anything for sure, but...
You've had a clear plan crafted for you already.

The way things were, you'd have directly gone with Reed to wherever 'Headquarters' is, as he had planned. And of course, Five would've accompanied you too, but with the way things are...

Surely, a wrench has been squarely lodged into everyone's plans here.

For now, this chance to rest is also a chance to figure everything out again.

Reed: I apologize in advance, but can we get a Reed on your plan from here on out? 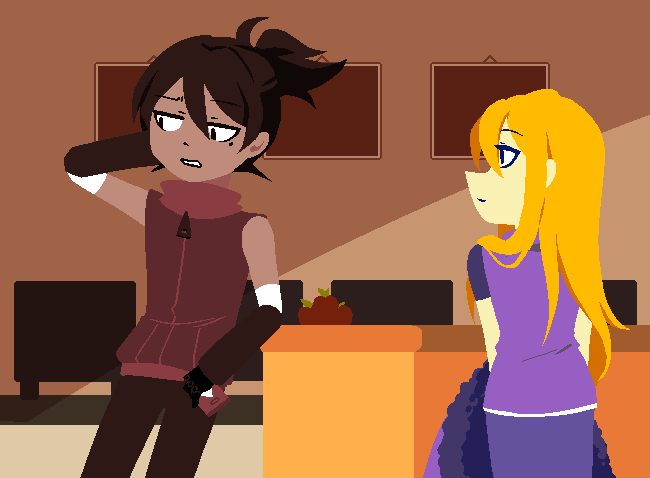 For once, Reed chooses to let the pun slip.
Just this once, though.

Since this is a rather important topic.

Nothing means more to you than being given this much help, though!
But you have a feeling that if you insist on giving him a kind response, he'd only complain more and more.

What a confusing person he is!

Maybe Reed's just allergic to your kind of personality. Hopefully, you're not too overbearing... though you truly don't enjoy being anything less than genuine.

Reed: Check in on your messages. You're sure a certain someone must be dying to get an update. 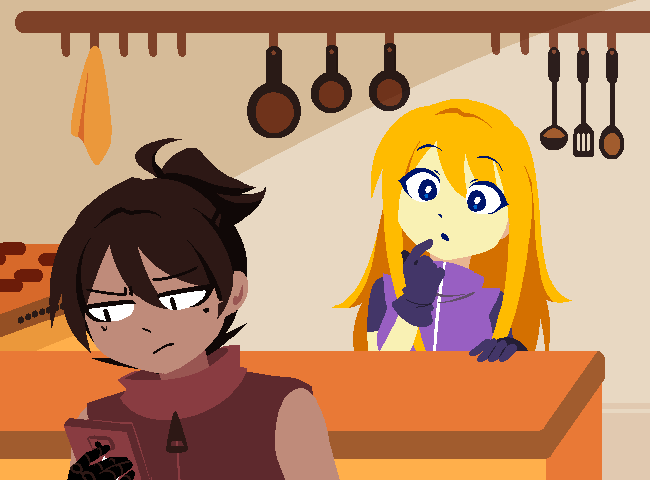 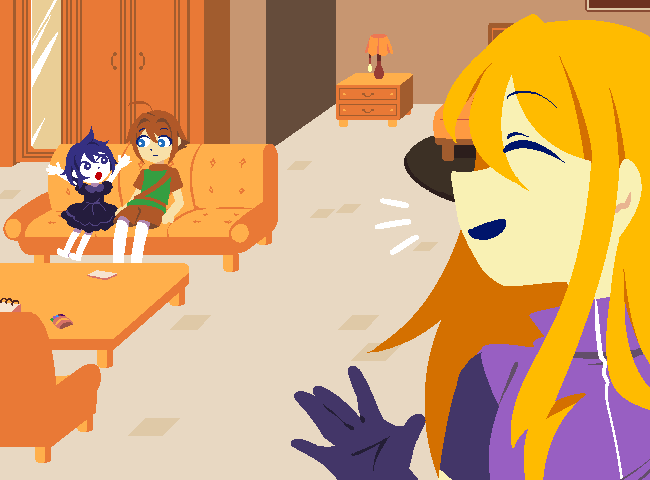 Oh, she was just with Nino!
Thank god, that's so nice WAIT NO.

You might want to tell Five the truth about Nino forgetting you two. She'll be heartbroken either way, but it'd be 10 times worse if Nino directly admitted to her he doesn't remember her. There won't be a good time, but now, at the very least, isn't the worst time. 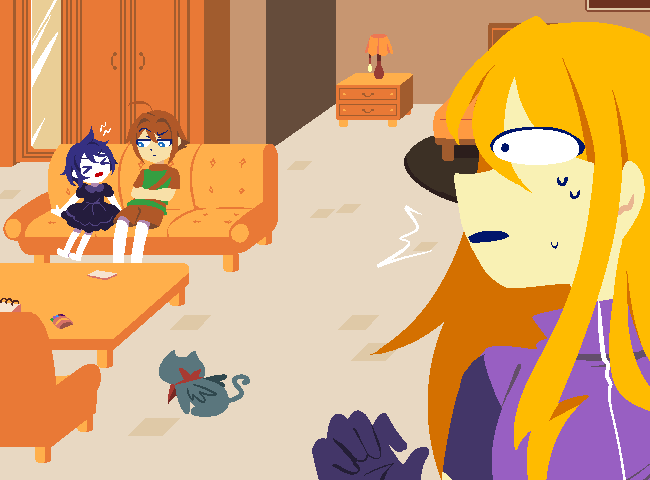 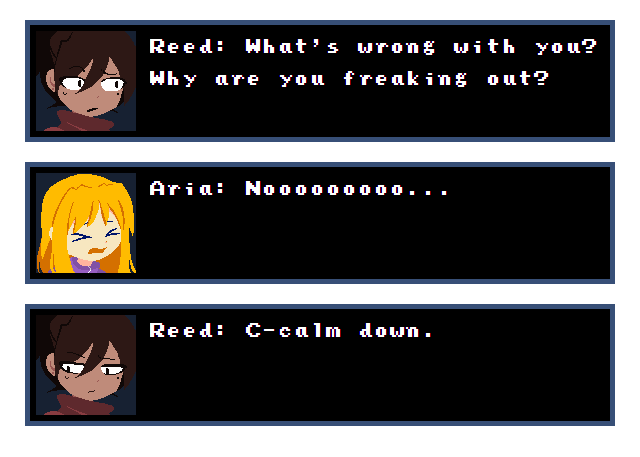 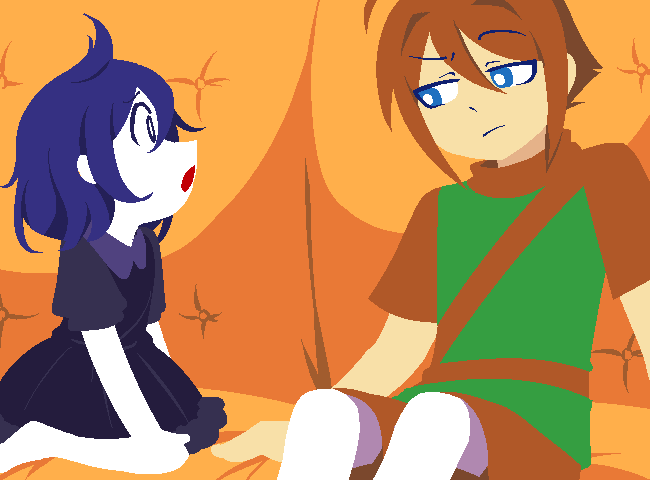 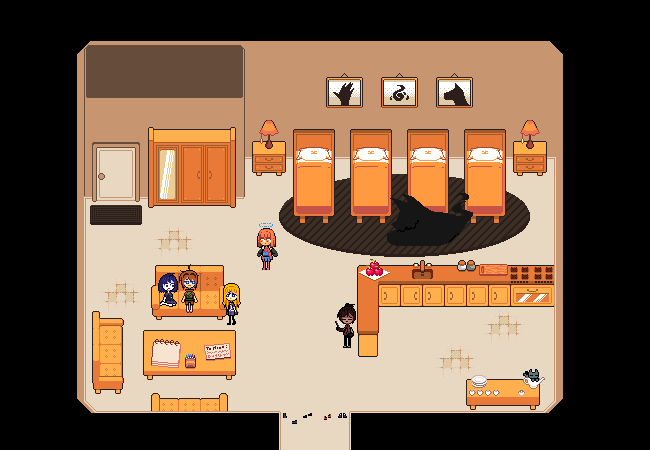 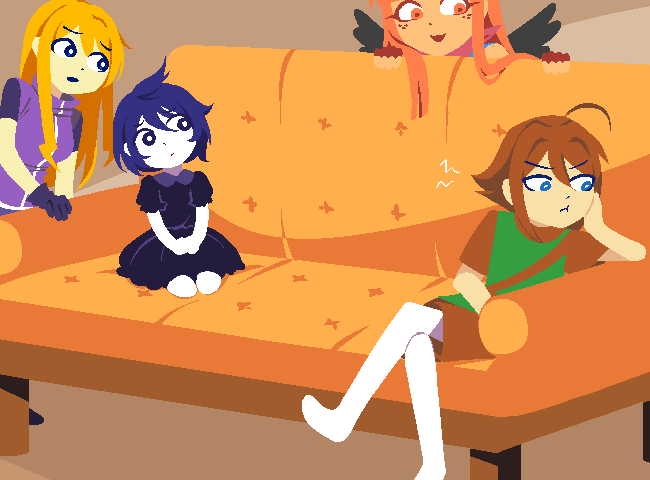 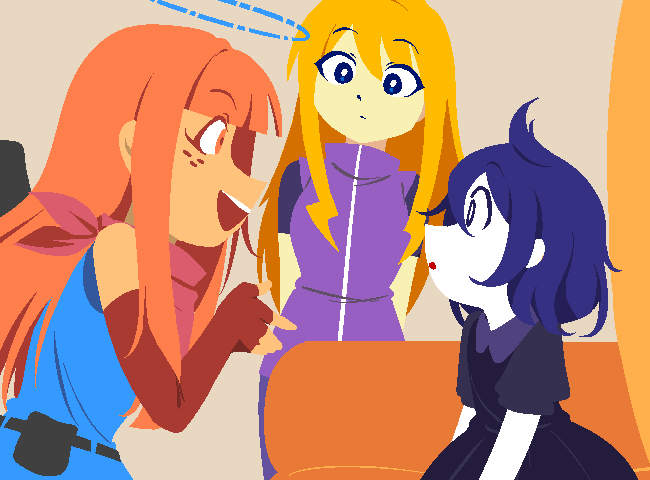 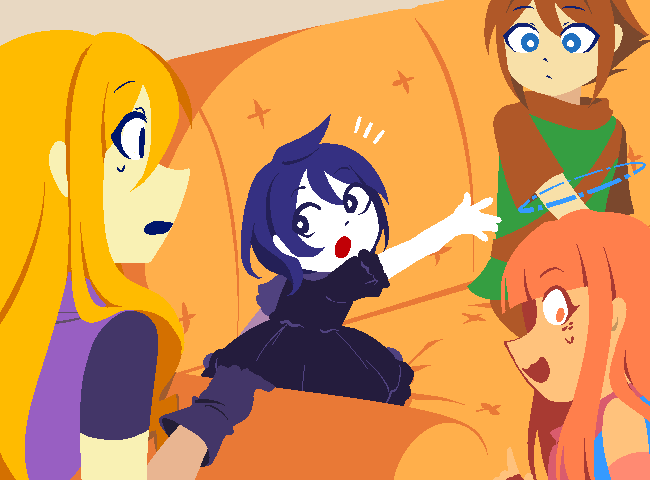 Five: Ask why Five being a monster is an issue.
Subscribe
Login
28 Comments
Oldest
Newest Most Voted
Inline Feedbacks
View all comments

Aria: No better time than to start explaining your abilities! Again, probably.

Reed: So, how's "Headquarters" over there?

No Five don't those aren't nontoxic

Aria: 1) Tell Five how proud you are of her for that surprisingly mature response, 2) make sure a "do not disturb" sign is on the door, and 3) dispel Five's disguise.

Mei: Have a minor freakout... ok, maybe minor isn't a good way to describe it. Major would be more fitting.

Five: Ask why Five being a monster is an issue in the first place.

Reed: You should probably think about stepping in.

Nino: Take verbal shots at Mei for her being a perceived dummy.

Reed: Okay, time to step in.

Nino: Not bad, not bad. So how and when did you figure it out?

Came up with a few more.

Five: Hey! Nino remembered something! Admittedly, it's one relatively minor detail about Five's identity, but it's gotta count for something!

Mei and Nino: The Celestial painting thing outside... did it... change, from the first time you saw it?

Boyfriend and Ludwig: Are you two getting along alright?

Reed: So, how's the convo with "headquarters"?

"Headquarters": Be annoying, as per usual.

Reed: Mediate. Calm things down if they get too heated. Handle the issues one at a time.

Everyone: Try to chill out.

Nino: Think about what you just said about Five. Did you remember she's a monster, or did you know beforehand? And no matter which, did you ever even realize you knew/remembered?

Nino and Mei: Regardless, how do you feel about this new development?

And just in case.

"Soul Room" well that's an ominous name for a hotel room isn't it? Also, is that what that flame symbol represents? The soul? Back in https://oceanfalls.net/p/1319 it's explained that the abilities come from the soul (Also, a detail I forgot is that according to Aria back then is that abilities come from a moment in someone's life where the person feels something strongly, which definitely could have ties to Nino most likely having been a child soldier at some point). I don't really have much of a conclusion or theory here. Just a bit of rambling (there's more but I couldn't fit it in one post).

I then started wondering what Nino's powers are. https://oceanfalls.net/p/1030 Back here it says Healing Hands (Oh hey one of the portraits in the Soul Room is of a hand), (what's the "???? 0 left" for one thing), but it seems like Nino uses """Healing Hands""" in {S} Shatter for a speed boost (Notably there seems to be something going on around the feet). Is Nino's actual power some form of boosting the body, like boosting the bodies ability to heal itself, or strengthening muscles in the legs for increased run speed? In which case, what scenario would bring about strong emotions that would cause an ability like that? I'd imagine being able to heal or strengthen people is something that could be felt rather strongly by someone in the middle of combat in a war.
Then again, who'd send some kid without abilities off to a warzone?

Probably someone who’d need everyone fighting for victory, especially if each and every individual on both sides has something which could turn the tides.

Now that I think about it if Nino can actually bolster people's physical capabilities, how would that work with Lune's ability "Mirror"? The narration refers to it as "mirroring" and as mentioned in this page by Aria https://oceanfalls.net/p/1319 "Because mirrors show reality" and I'm inclined to trust an illusionist's judgements on what's actually real. So are the "copies" as I'll call them always perfectly matching Lune? So if Lune was hurt, like sliced shoulders, burned legs, ect, would that be applied to all the copies, since the copies are the result of "mirroring" and "mirrors show reality"? But even then if Nino's actual power involves bolstering some aspect of someone's body, would that count as at the time apart of someone's "real self"? Or is it more like an external power and thus not counted? Like how Aria's illusions aren't apart of someone's "real self" but are more like a disguising aura?

As seen by Nino healing five, Nino’s ability are completely “real”, so if Lune is completely affected by anything through all bodies, then that’s what will happen. Unfortunately, we have no idea how Lune’s mirror works in tandem with other abilities, so there’s no nailing the specifics, but we do know that she’s affected by a weird cyst-growth thing on her arms likely related to her ability. If all bodies are affected by it, than maybe we could get a more concrete answer on how mirror works, but until then nothing. Even then, there’s no complete knowledge in how resonance works. Nino’s ability is likely healing, but even if it’s buffing, it’s still real due to being life type and not illusory type. https://oceanfalls.fandom.com/wiki/Healing_Hands
https://oceanfalls.fandom.com/wiki/Special_Ability

"cyst-growth" I didn't find any when looking at the panels in the intermission, can you send the page over?

(This next bit of the reply that whoever is currently reading is reading is not related to the above reply), while looking back at the intermissions I noticed that here: https://oceanfalls.net/p/7699 below "> Lune: What a chat." in the line "With words alone", "words" was green. So I right clicked and hit inspect when selecting "words", and apparently it's "words", why is Nino tied to words? I checked the DIPLOMACY back in https://oceanfalls.net/p/2748 and it's just "DIPLOMACY", so Nino for some reason in was tied to words, yet DIPLOMACY wasn't tied to Nino. But the context of where why and when "words" is being used must be important, since there are times in the webcomic where "words" isn't being tied to Nino. I have no idea what this means.

The method of applying the color is different, but the color's value itself is the same re: Nino text & Diplomacy text! What it means is to say that Diplomacy is the favorite option of charming people like Nino, taking Selene as an example in the intermission page.

The association of each combat option with a character wasn't clear that early on in the story, so the colors used have omitted character names on purpose. By now though, the associations have become more obvious, so whenever it's appropriate I do show that each of the three options for Combat, Diplomacy, and Stealth correspond most strongly with three major characters - Suvillan, Nino, and Ruit, in that order.

More like cracks actually but still, ask and you shall receive.

You're correct, that's the symbol for a soul.

Ludwig: Reminisce on the portrait of Ludwig capturing only a ghost of your goodness. Also shadily sneak and listen to the peoples.

I love your commands so much pun lord... thank you for this gift...

All part of the territory, the real gift is you and Oceanfalls™

Reed is having introvert problems

Mei: Discard older theories about Nino and make new ones. Maybe mention a few of the old ones to embarrass him.

Meimona: Nino somehow knew Five was a monster without being told... He remembered a thing!!!