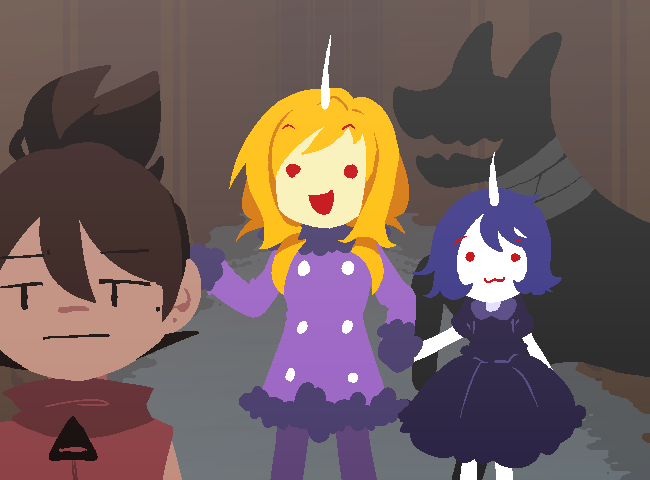 Aria: Names are Practical. If something happens on the journey, you will need to know each other's name for fast communication. 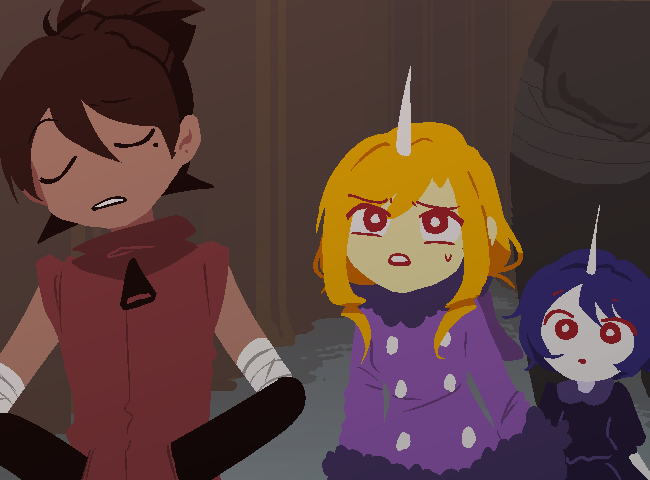 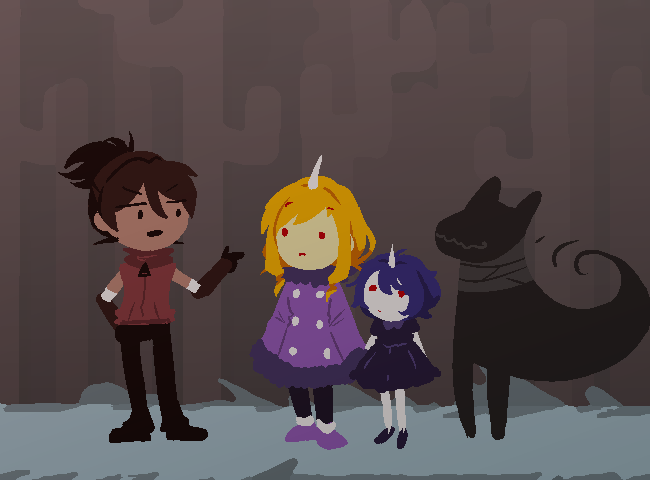 You've verbally defeated a foe with raw insults, the likes of which you've never dished out in your life before!! Which is... The exact opposite of what you were trying to do in the first place.

This is all kinds of AWKWARD now!
Like, even more than it already was... All because of you! Something tells you you're the only one here who feels that way about it, but still, you think you have to fix this. Let's move off of the wrong foot, and hopefully onto the not-wrong one. 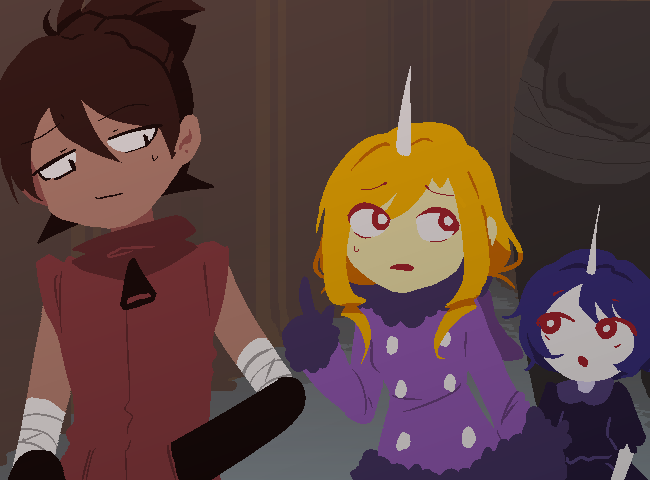 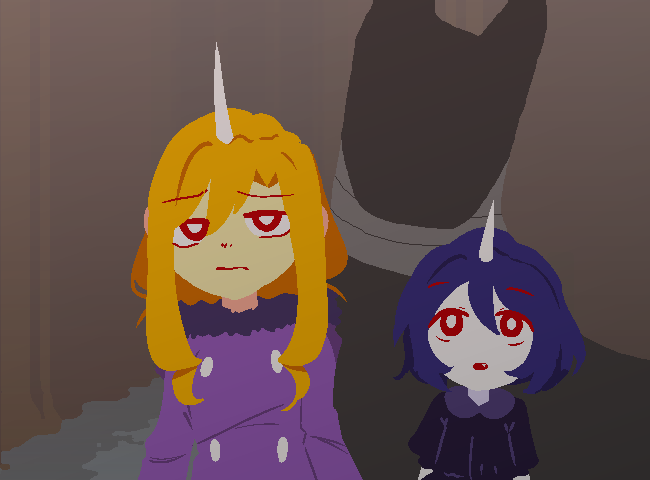 Boy, he's really adamant about not changing that image of a Rude Stranger here. Maybe it means that that's just what he's like.

It feels somehow wrong for you to leave things as awkward as they are, but it's not like you can do anything to change his attitude. In fact, whatever you do seems to just make things worse. It especially feels unpleasant when you fall on the verge of responding negatively to it, something you didn't know you'd be prone to until now.

Well, it's fine, probably. You will simply try not to be too "bothersome" from now on, or whatever. You'll be polite and quietly count the minutes until you're at your destination.

And then, you'll never have to see him again when all's said and done. 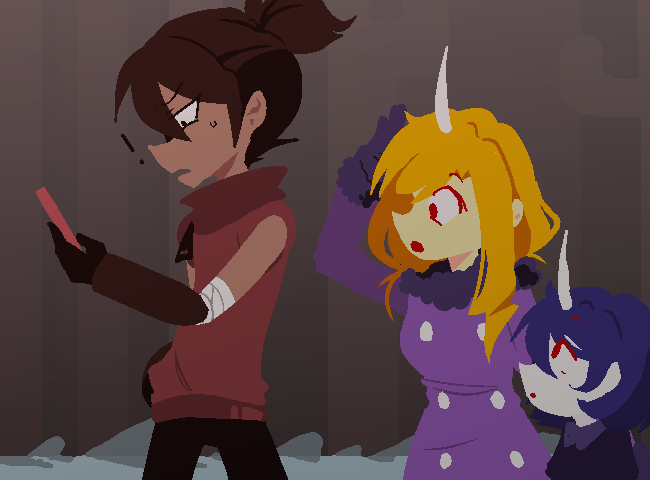 That being said... Until the time comes, and since there's no harm in it, you will maintain a nicer attitude towards the rudeness of the Rude boy.

Whose name you still don't know.

It will probably be a very long time until we learn his name.

Probably a very, very long time, before the name that begins with R is revealed.
Hours, days, maybe even weeks of... Hey! What's he doing there?

Why, you'd better take a look! 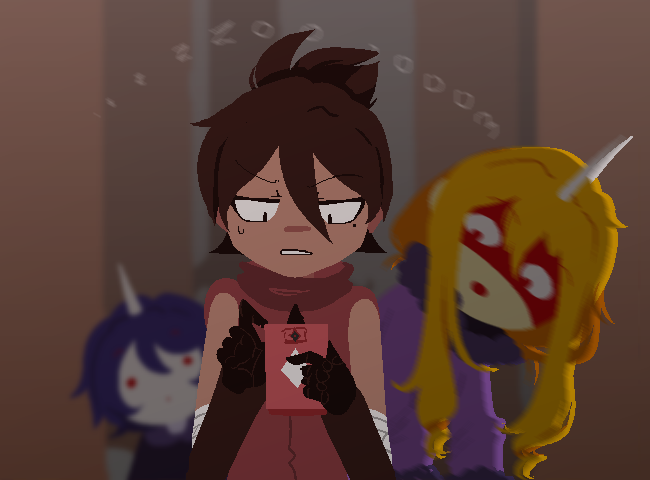 He's holding something, and weirdly enough, he's completely focused on it.
He's so focused that he's walking much slower, and he doesn't even seem to notice you. Huh, what could be so interesting here.

Your curiosity gets the best of you, and you sneakily take a peek. 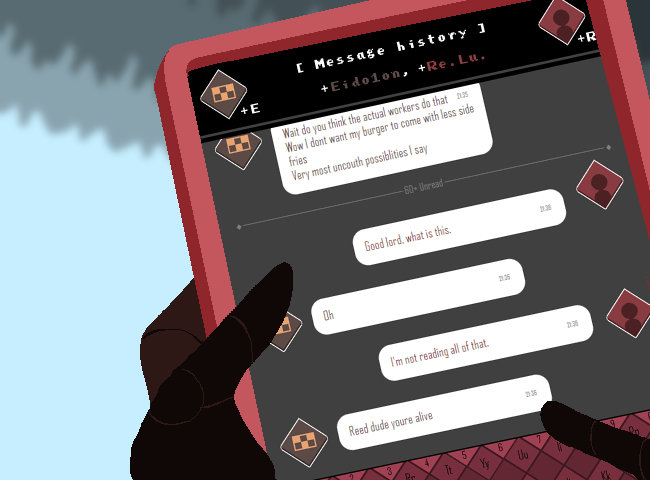 You see something absolutely puzzling.
What the heck is this. 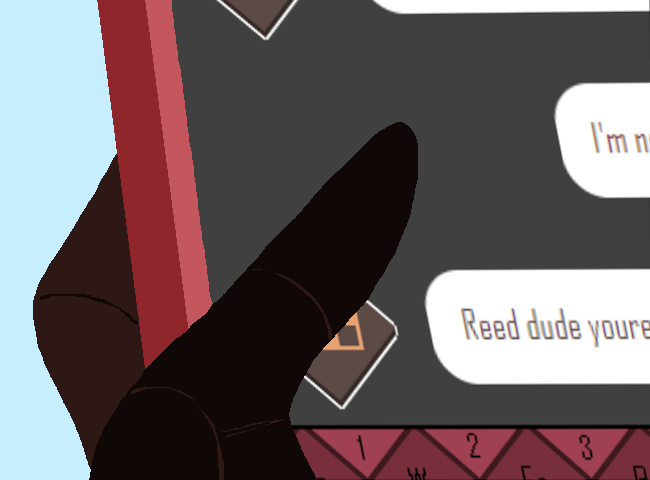 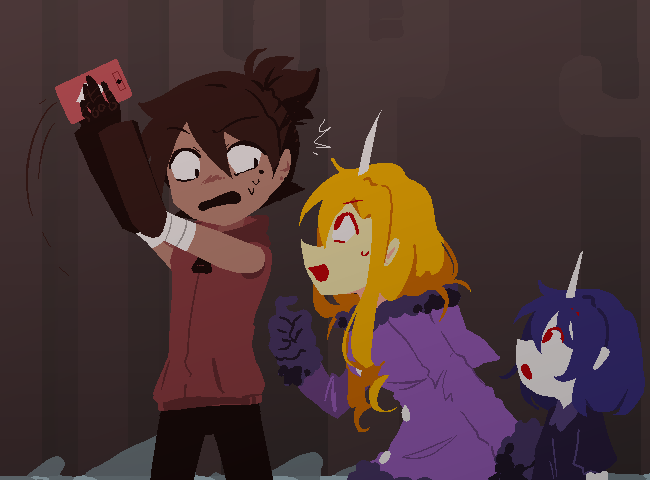 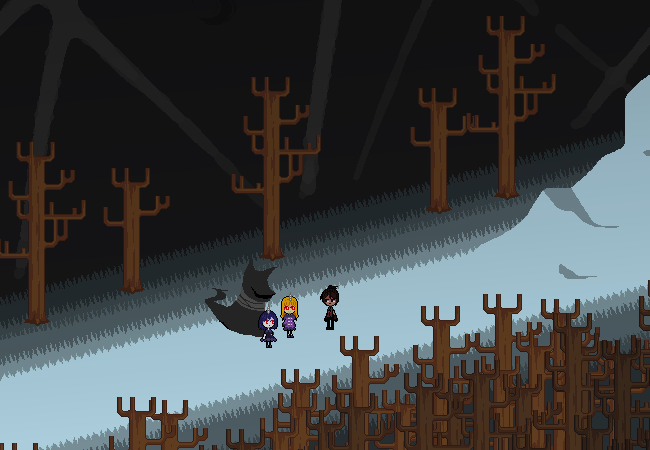 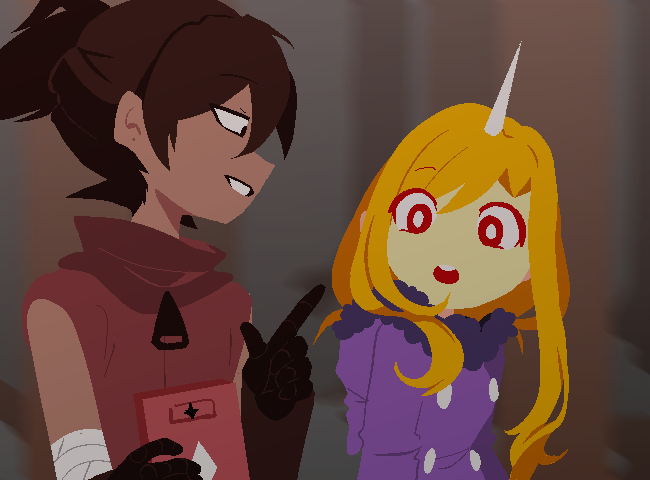 Reed: Respond to texts.
There is... Quite a lot to trudge through. As usual. 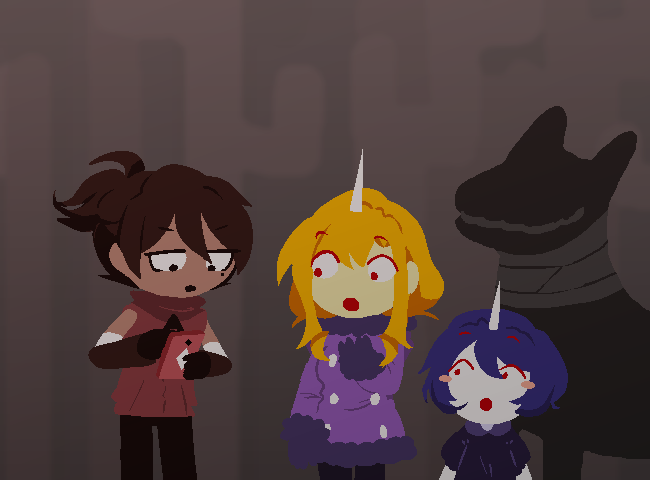 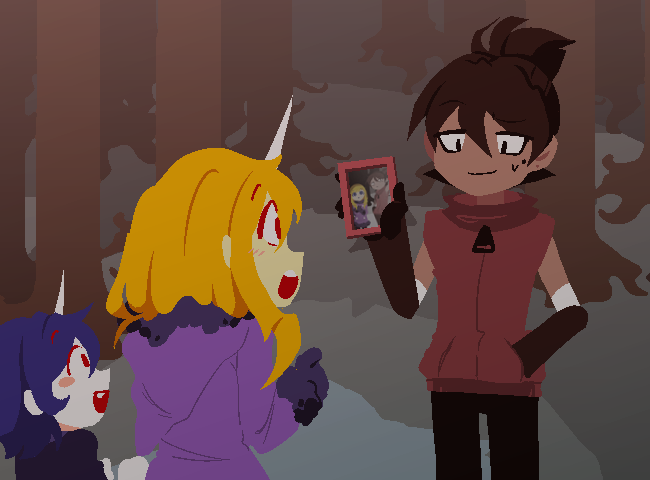 Reed tells you to look at his tiny phone as he holds it up, and suddenly, a light flashes from it very briefly.
And this continued for a bit until you took a picture of all three of them.

Er, all four of you. Sometimes you forget to count yourself, as one does.
You guess you now have two (2) useless pictures in your VERY REVOLUTIONARY no-wire-small-rectangle device now. 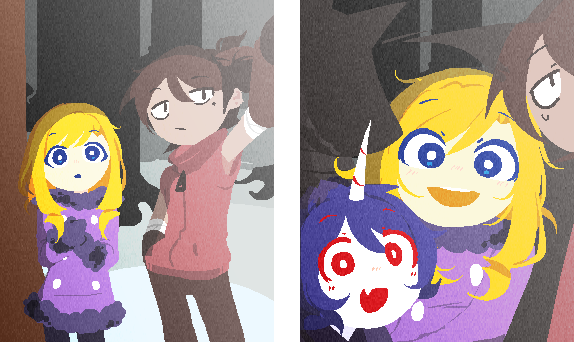 That is a better name for it than "mobile phone", really.

You note that the girl's disguise somehow didn't get caught in the photos, contrary to what you planned. You were hoping the picture could double as an explanation for her circumstances to... Uh, to headquarters.

You suppose this is due to some limitation of the ability itself.

Reed: Get back to +Eido1on

You're not sending the one with the monster kid and the dog though, since that'll be significantly harder to explain over text. They will just have to meet face to face later. 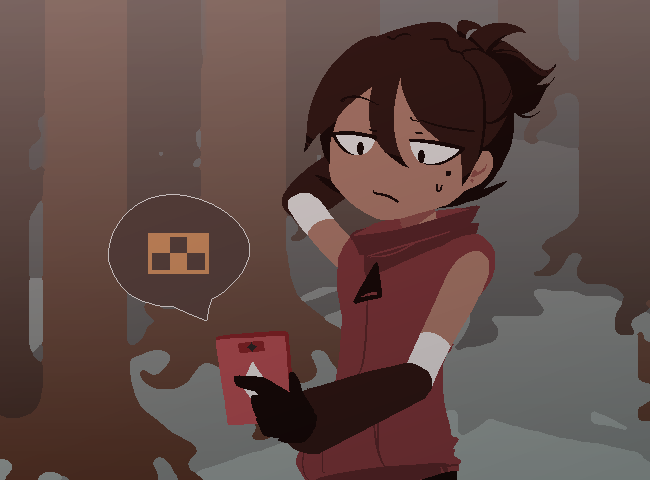 "Headquarters" is not handling the extended absence well as usual, but you make sure to reaffirm that you'll do your best to be done as soon as is humanly possible.

A swift escape is achieved.

You’ve got to keep your promise of returning soon, though.

Although, you do take a moment to look over the logs from the start 'till the end just once, for good measure. You ignore the nagging of Aria- you mean Blonde Girl while doing it for a little bit more. You'd better make sure everything's alright on the other end.

OK, that's enough of looking at and messing with your phone.

They're not typically things to be shared, you know. Lots of privacy that has to be kept safe in there. A monster kid, and a human-living-as-monster-girl could never understand your delicate human concepts of a personal phone's privacy. 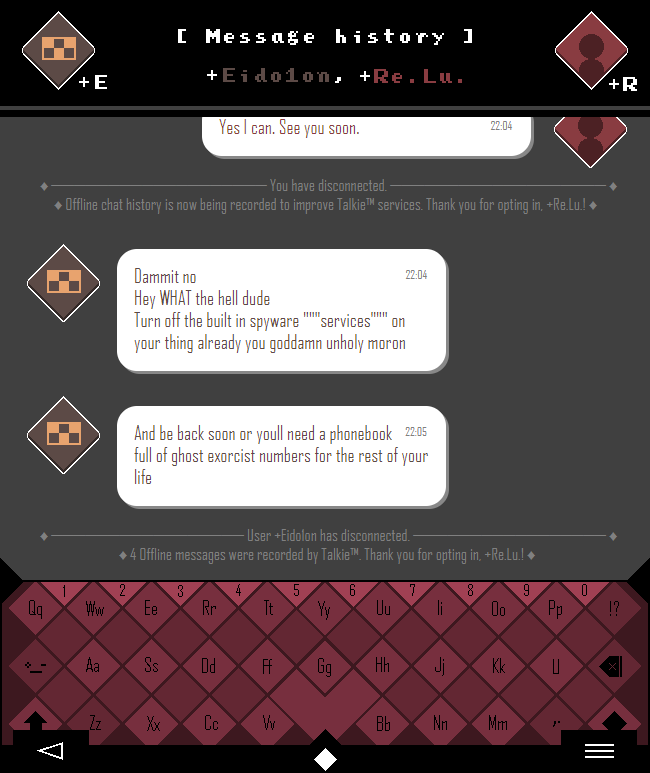 Unfortunately for you, the human market doesn’t really value the privacy of its product consumers either.

Anyway, now that your business is taken care of...

You forcibly get everyone (and yourself) to get moving and stop dawdling around. The respect-worthy "Headquarters" is "QUITE LITERALLY starving zero joke", after all.

Not to generalize, but gee...

Girls are so melodramatic sometimes!
But, you know... 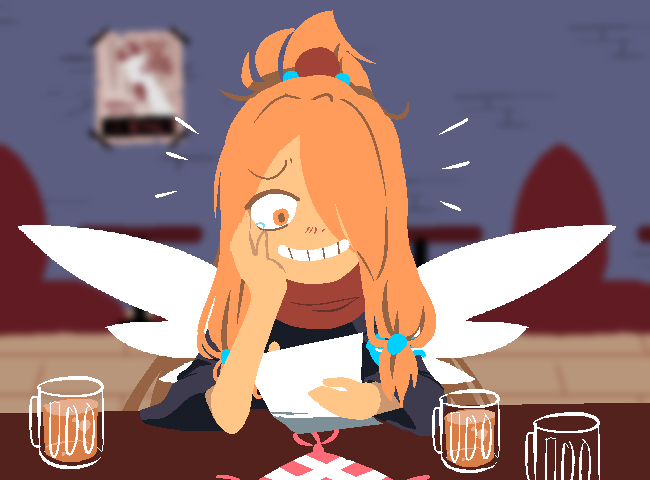 That's what also makes them so romantic sometimes!

Like, wow, who describes a person with sentences like "a treasure made to be cherished" other than them?

Why yes, these are the healthy thoughts of people who are as well acquainted with the brains of fair maidens as they are with the back of their hands, indeed.

This was a glorious update.

Nino and Kaji would get along - Nights warning us of the endtimes.

How does Reed think Aria talks too much when he knows people like Eido1on?

Either Aria was right about Reed being phone crazy, Reed excuses it because of texting(technically not talking) or knowing Eidolon is drinking or R excuses old and close friends.

Wait what is Kaji carrying a picture of Galactic Princess Selene? by the Queen's unholy visage!

I just realized we got confirmation that elidíon is a girl

MY FAVORITE PAGE SO FAR.

No problem at all! Thank you for the help, I've fixed it.