You suddenly realize how cold it is here, brr. Alright, guess the first thing on your to-do list now is to get something warmer! With high spirits, you decide it's time to START adventuring and--

Nino: What was that? 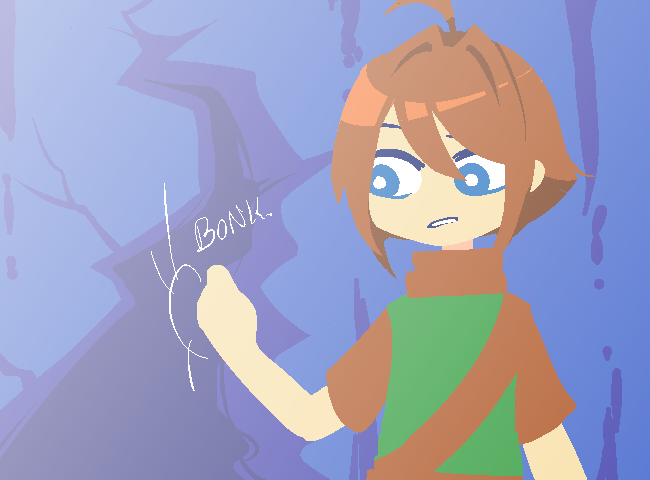 Something flashed behind you, that's what. You inspect the source.

The hole you came through got closed off, it seems, which is quite weird. This surface is stone-y and cold, but just a second ago you literally went through it! Well, you guess it wasn't exactly clear how you did that, what with all the light and such.

Trying to figure out how these inexplicable physics work just confuses you further and further.

Something suddenly rustles behind you. 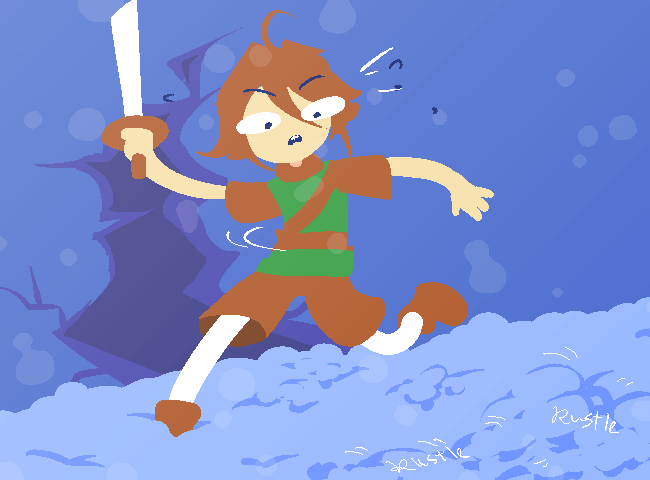 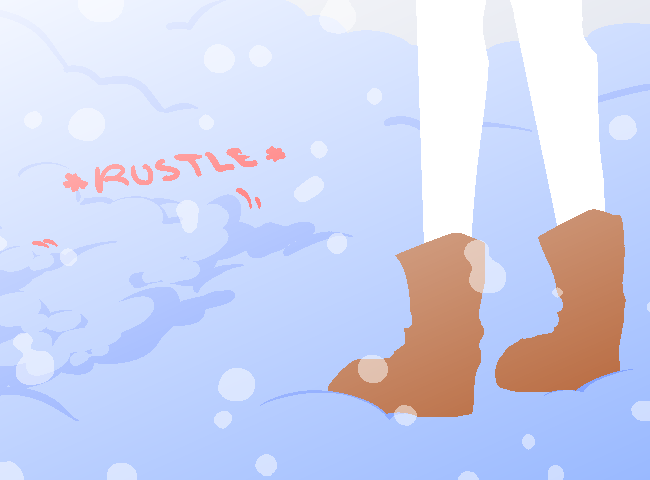 You hastily put your mind in attack mode and turn around to face the suspicious threat.

Nino: Look at the snow. 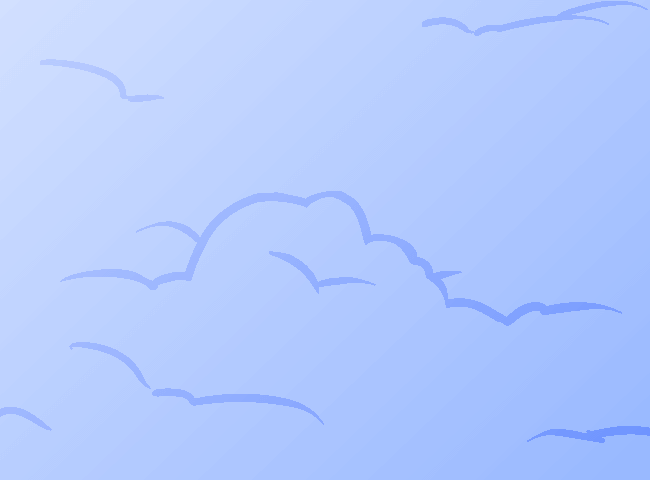 It's just a pile of snow. Completely harmless. 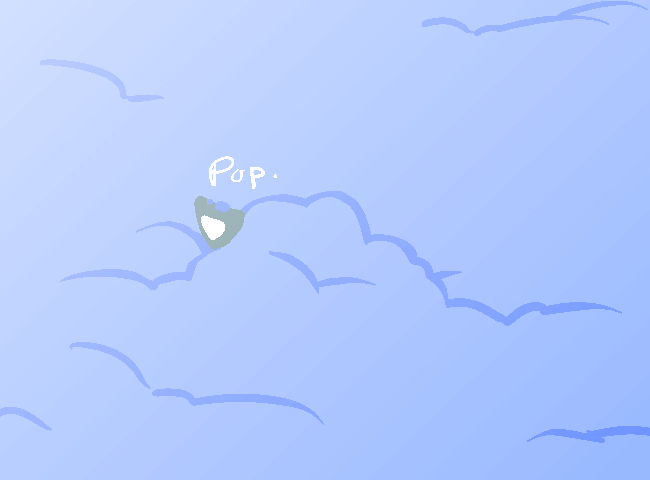 The pile of snow inexplicably grows an ear. 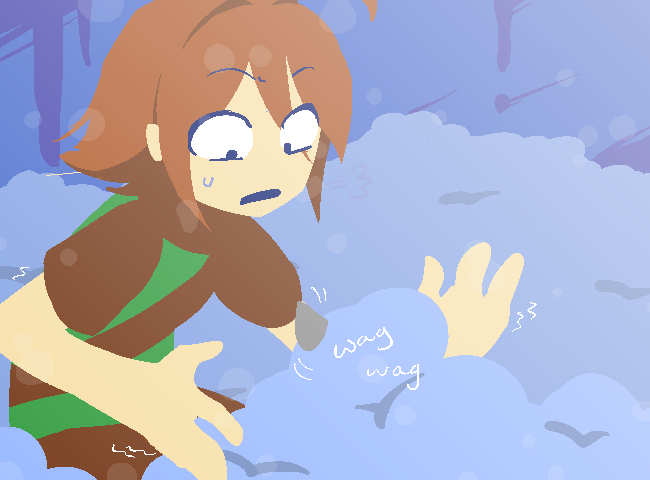 This is definitely not normal snow pile behavior, how perplexing.

Something rustles and wags inside the snow. 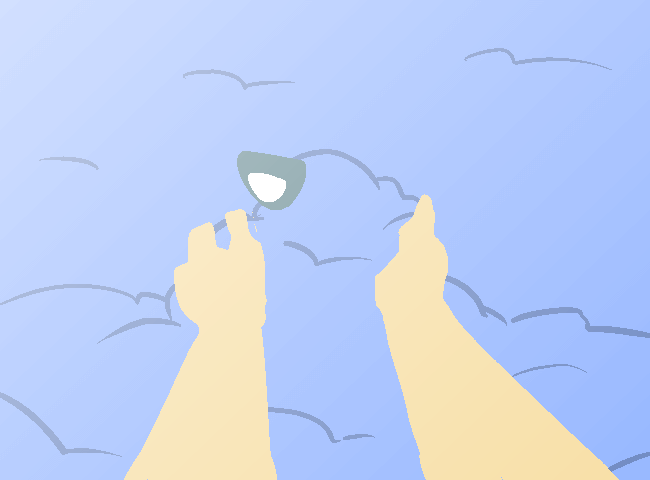 Slowly, you attempt to locate the suspicious source of rustling.
Your hands pick up something fluffy and soft. 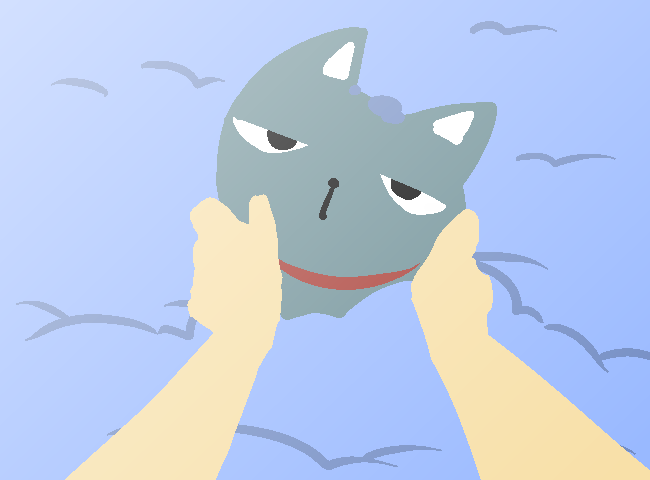 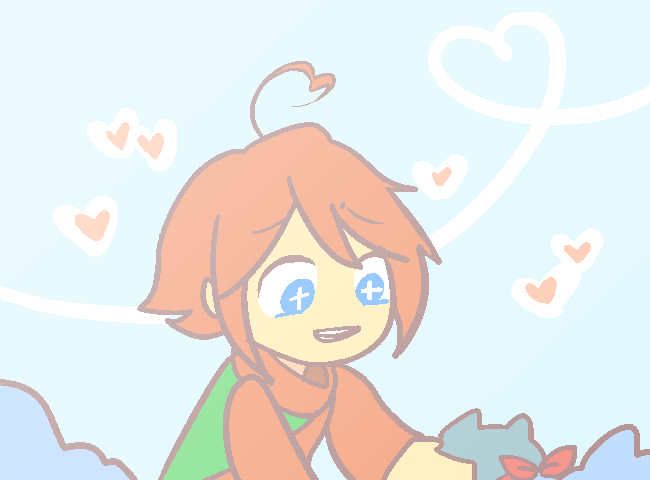 IT'S A CAT!!
A REAL CAT THAT ISN'T RUNNING AWAY FROM YOU!!

You have never met a cat that allowed you to even get close to it, much less to try touching it. And here's this fellow, you have your hands on him, and he just absolutely gives zero fucks. He's letting you HOLD him, even! 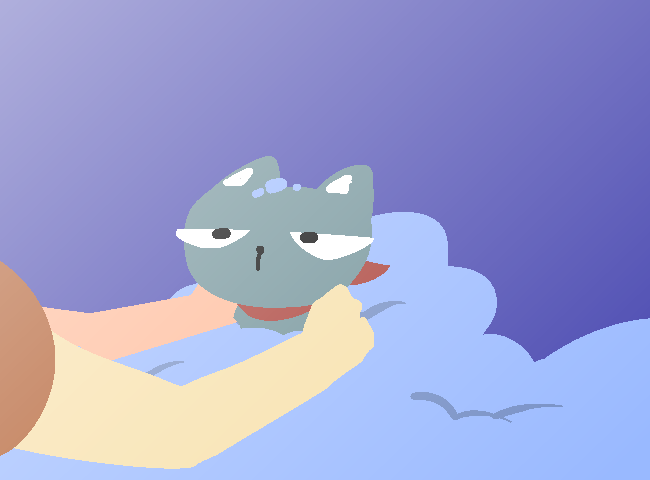 You are now cat.

Cat: Do some batshit insane shit. 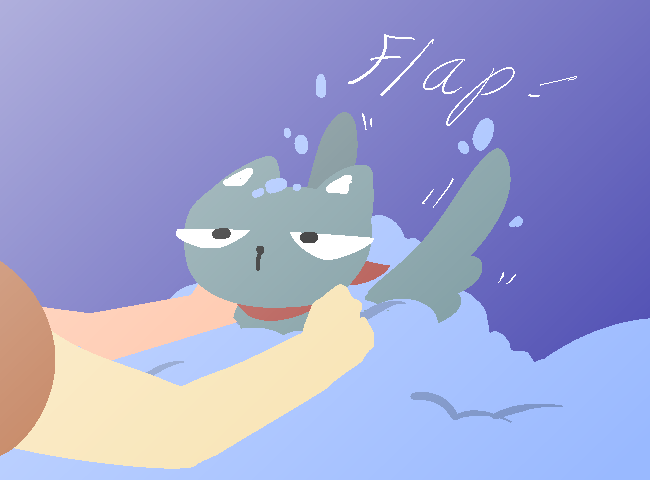 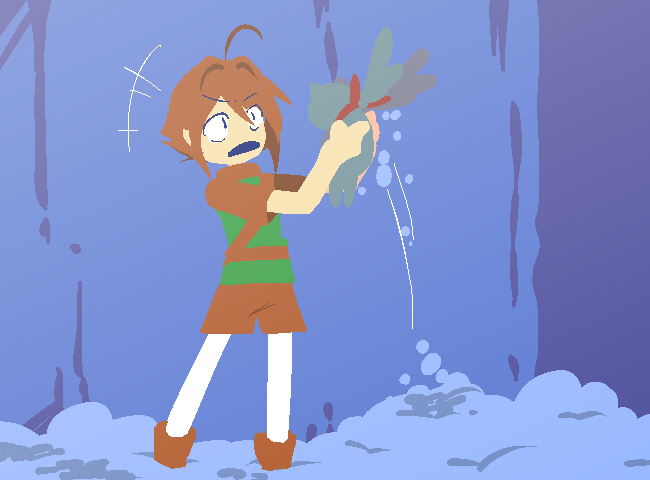 Holy shit, HOLY shit. It's THAT kind of cat!! 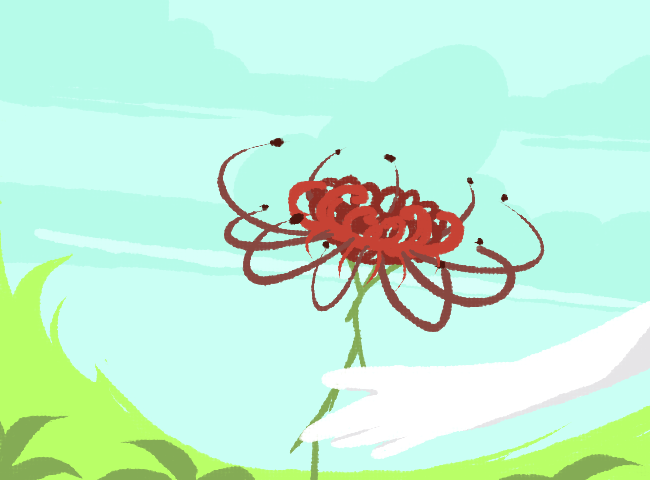 You pause for a moment, realizing how this command could be interpreted in a different smartass way. You could take it to mean that Nino could become Five, or that he could become five.

But, for the sake of everyone's sanity, you're not going with the "hilarious" option.

Instead, you are now Five.

Five: What is Five doing? 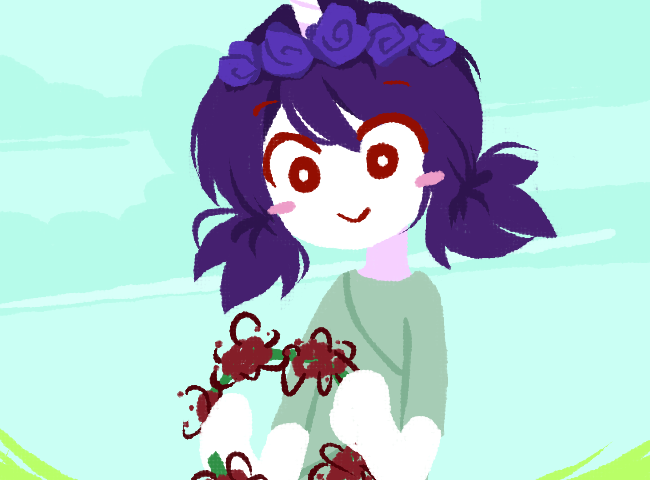 Five is making a flower crown! Five is using beautiful red flowers. These flowers have a name, however Five does not know it. But it's okay!! 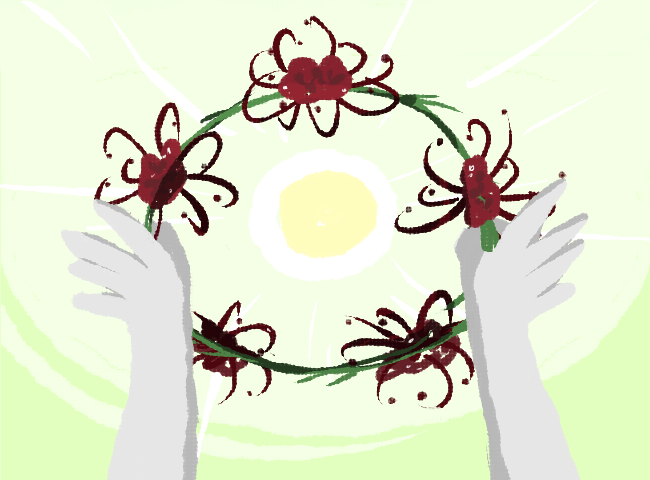 The work is all done.

Five holds the crown up like it's a trophy. Because it is a trophy!

Right now, this crown frames a beautiful sunrise. And later, it will frame the head of a person very important to Five. It's a trophy for that person!

Five is very pleased with her work.

But Five feels like Five has seen this before. Five knows what is happening here and what will happen next. Maybe Five is dreaming of the past.

It's a pleasant dream. 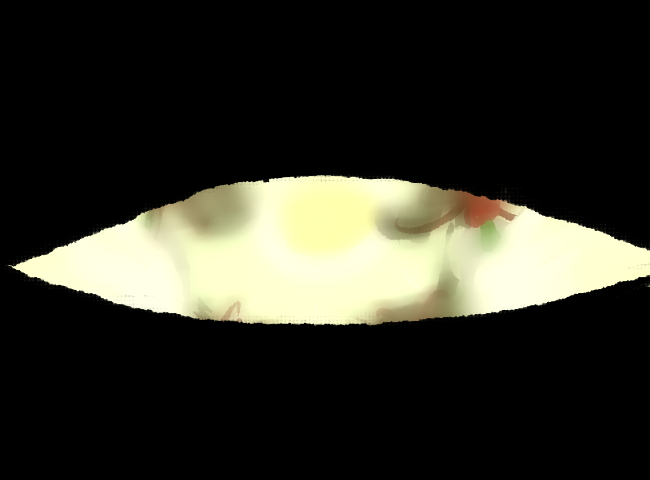 It looks like you have no business being Five anymore. 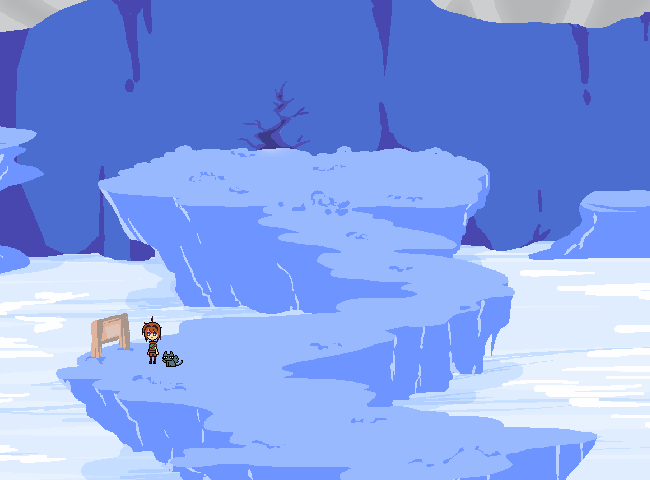 You and your new best friend saunter up to the sign.

It seems like a bulletin board of sorts, somewhere to show regulations and news, perhaps. How old fashioned! Whomever uses this must be so out of touch with the times. 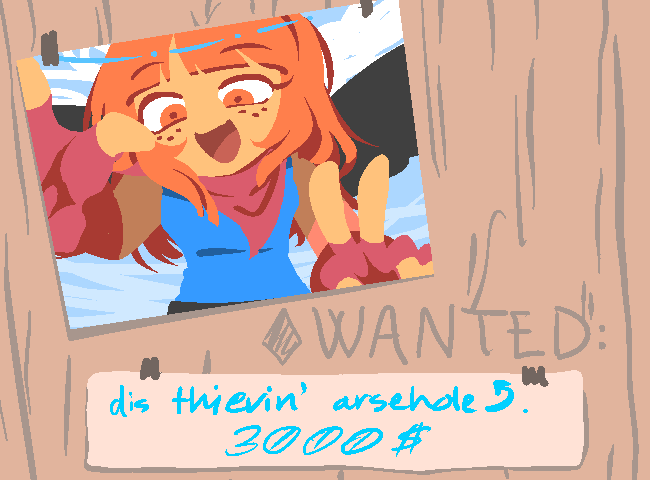 There are no particularly important articles on the board right now, besides one curious thing.

It's a poster of a wanted criminal, with a very weird description suffering from much lack of detail, and a very weird picture. Is that really the kind of face a criminal on the run should be making?? And jeez, winged thieves? That's quite the unusual kind of felon.

But despite all that, the winged thief has a whooping 3,000 coin reward on her. 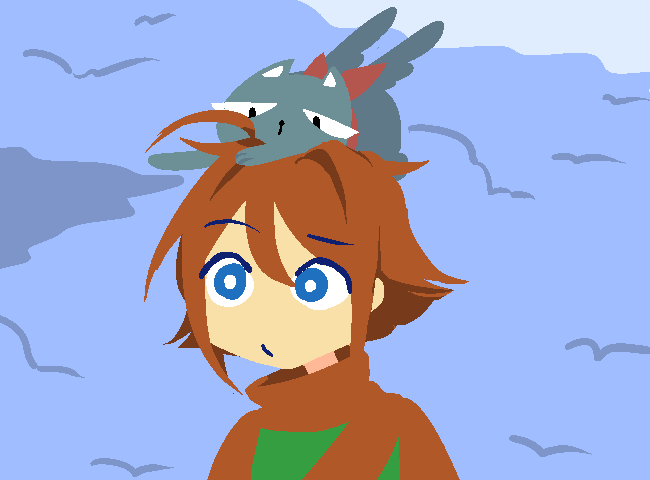 Oh well, you're no bounty hunter.

This holds as little concern for you as it does for your new cat friend. (<3)

Nino: Take a look around at your surroundings
Subscribe
Login
0 Comments
Inline Feedbacks
View all comments