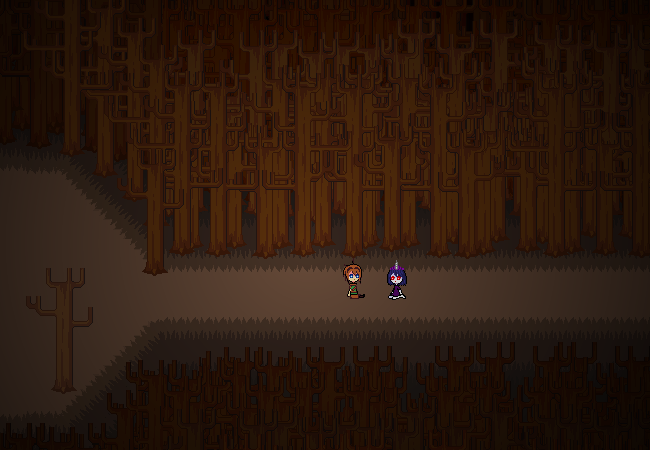 Nino: Ask her how she feels. 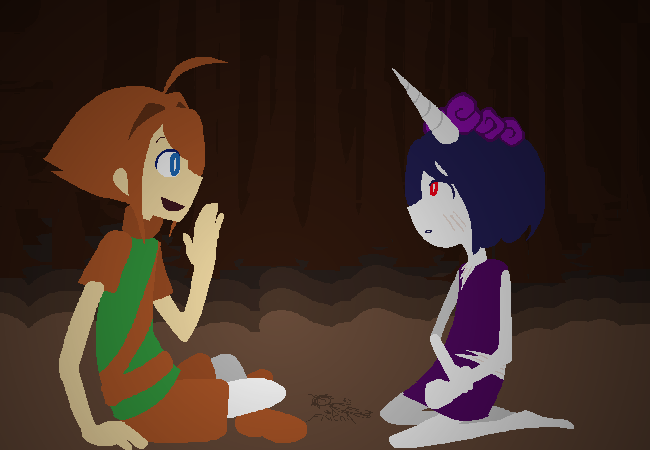 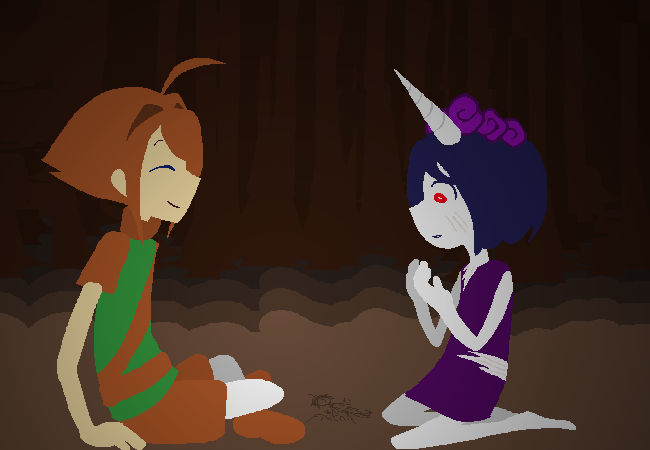 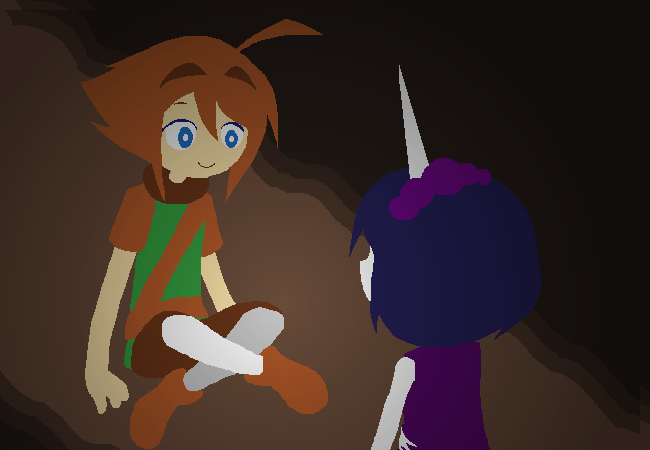 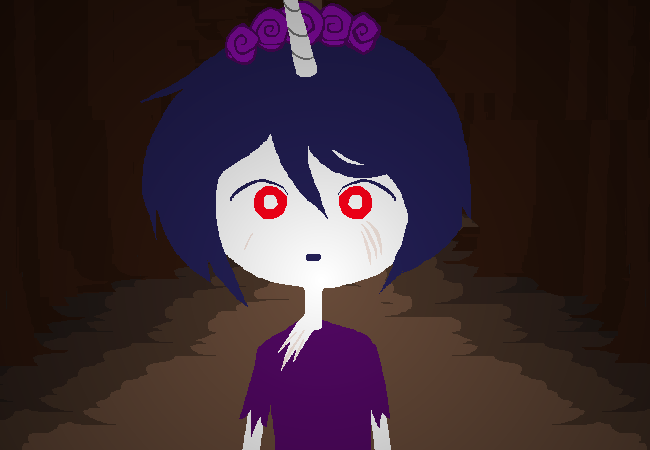 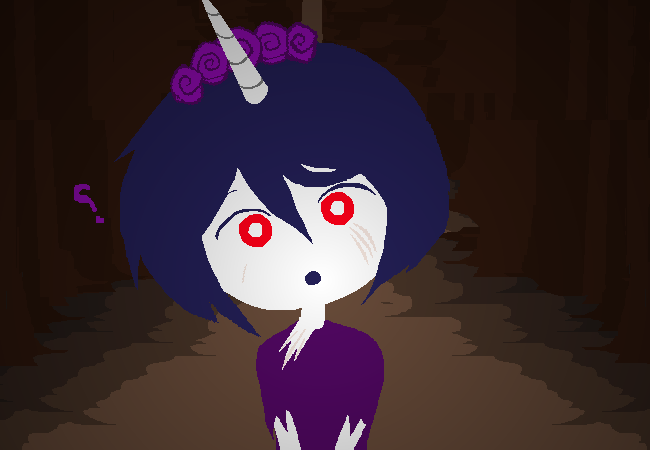 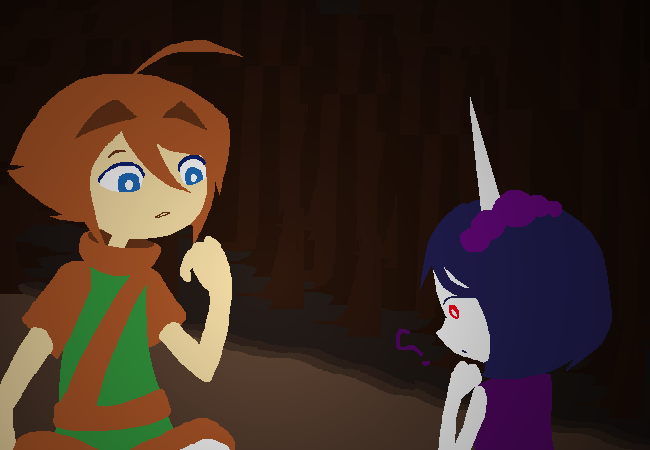 She's quite young, and appears to have trouble communicating her thoughts and understanding you.

She seems like she's faced a lot of hardships. Well, even if she might not fully understand, you will try your best to explain the concept.

Perhaps a drawing could help. 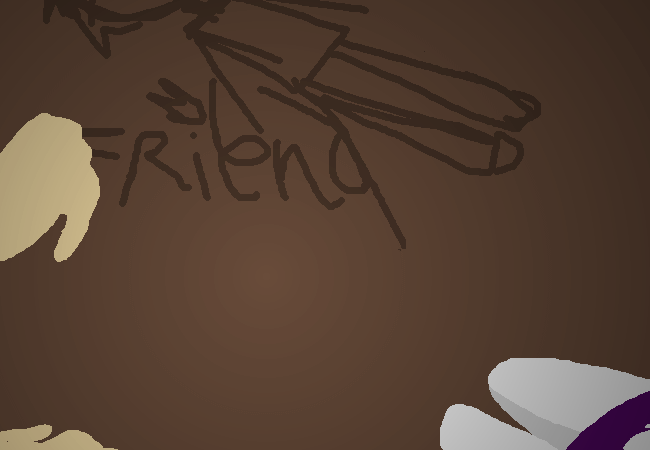 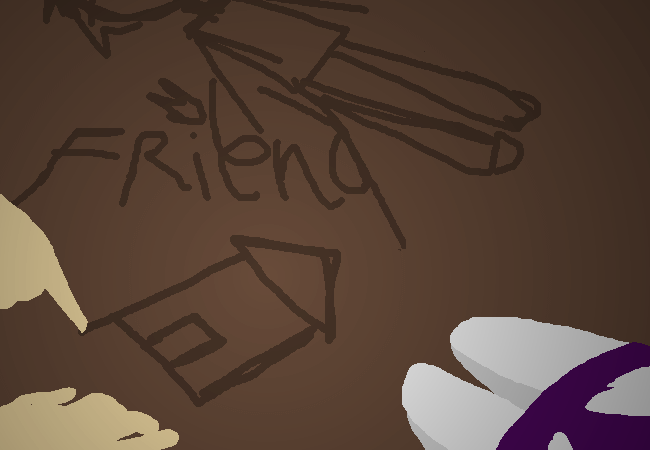 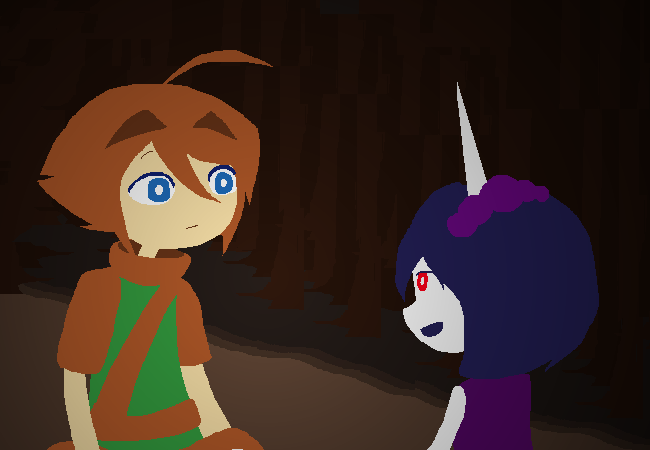 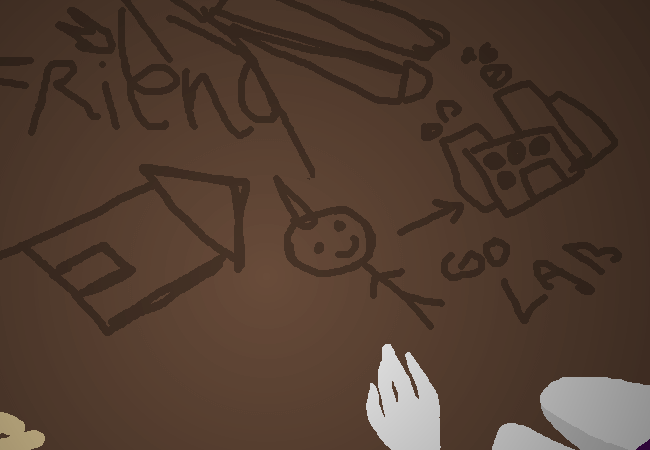 Five draws you a sketchy picture of... something? Someone?

Although it is very adorable, it just raises more and more questions.

On the bright side, though, she's slowly seeming more energetic and less scared than before. You hope she's warming up to you well. 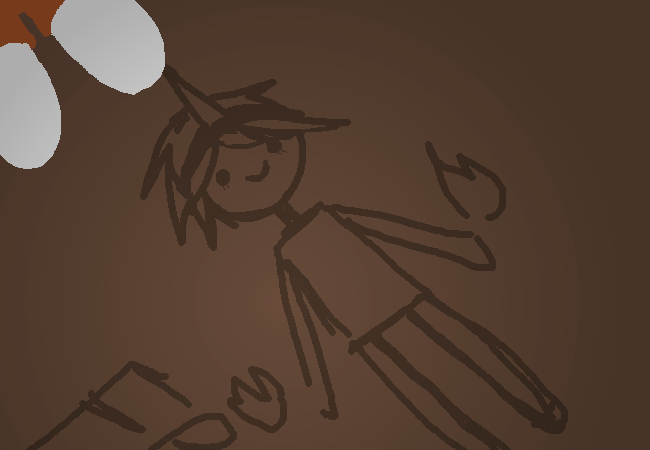 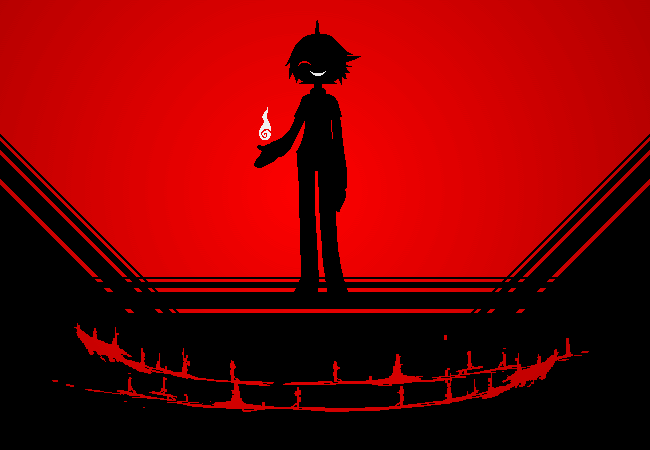 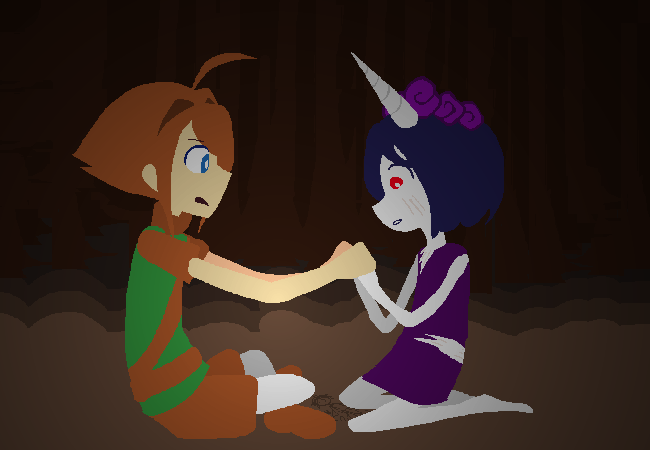 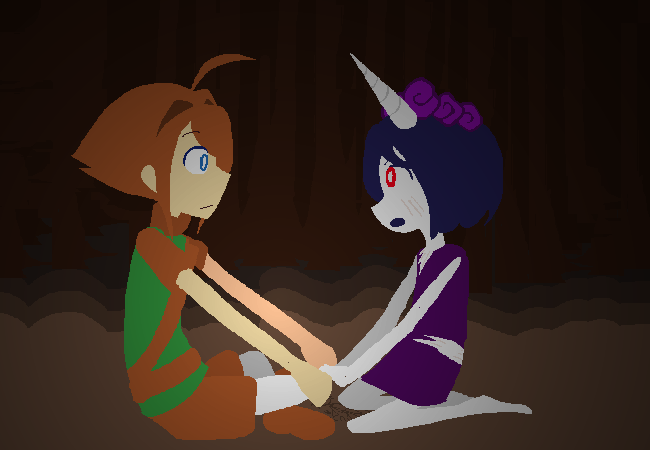 Nino: Five is no name. Brainstorm a new one for the young lady. 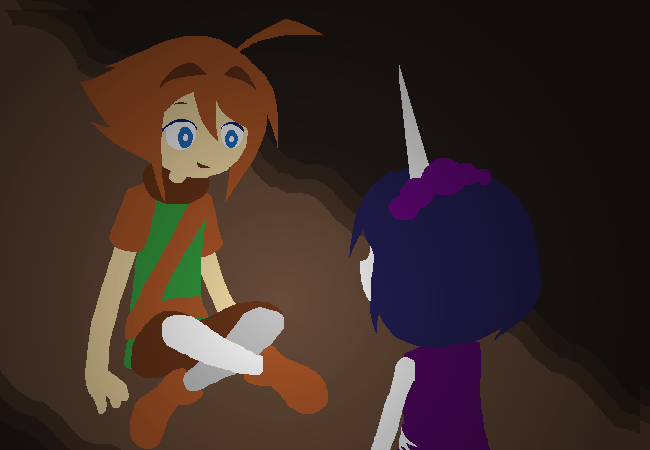 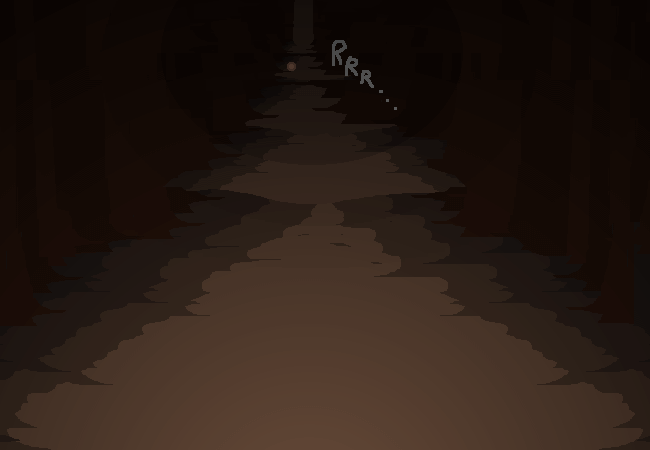 Your conversation is interrupted by sounds of rumbling coming deep from the forest. 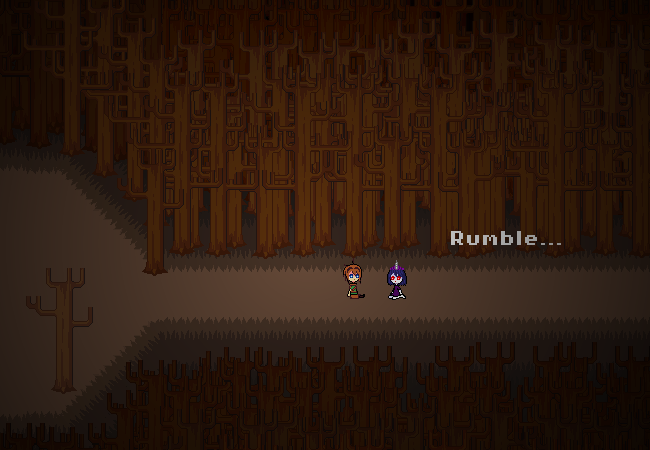 Both you and Five are in no condition for any encounters.

You yourself haven't eaten in a long time. You feel sleepy, and you're low on HEAL to boot. Five looks somewhat tired too. It's impressive how energetic she's starting to sound despite that, really.

You're going to have to exit the forest if you want to stay alive. 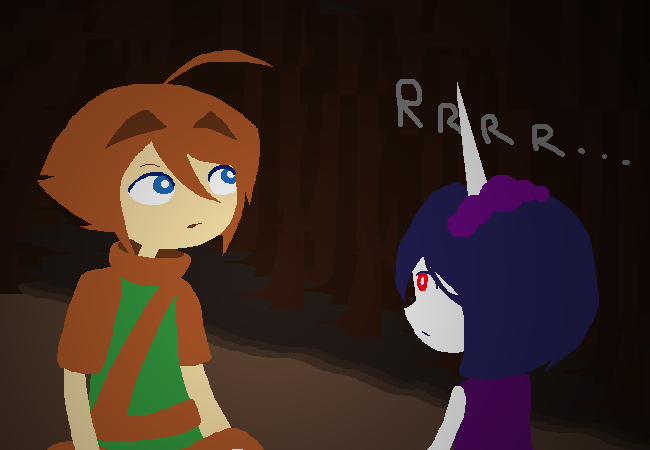 Nino: Well, nothing to do but continue onward.

Five will always follow behind you from now on.

You go through the only path forward, but you stop once you reach that strange light on the ground.

It appears to be a LANTERN, lit by a small firefly. It's providing the light in this area.

Nino: Inspect the LANTERN first, since it's just here in this spooky forest for no good reason.
Subscribe
Login
3 Comments
Oldest
Newest Most Voted
Inline Feedbacks
View all comments

tl;dr: Monster Girl is now feeling alive again, and is also named after the number five. Nino asks where her home is, but she doesn't know what a home is. After Nino explains, she says her home is a lab. She also explains her "friend" was a guard of the prince, and prince made him banish her to transform and be useful. Nino decides that's bull, and wants to be friends. Nino tries to give a better name to Five, but is interrupted by a far away rumbling before he can give it to her. Decides to move, and finds a lantern.