Kaji hands you a key to a room in the hotel.
He does so very readily.

Perhaps a bit too readily. Hm.

Nino: Ask Kaji about why he let you go despite what you and the other humans did.

Nino: Still, it's unlikely that he'd risk the townspeople's reactions for one small victory over long term gain... right? 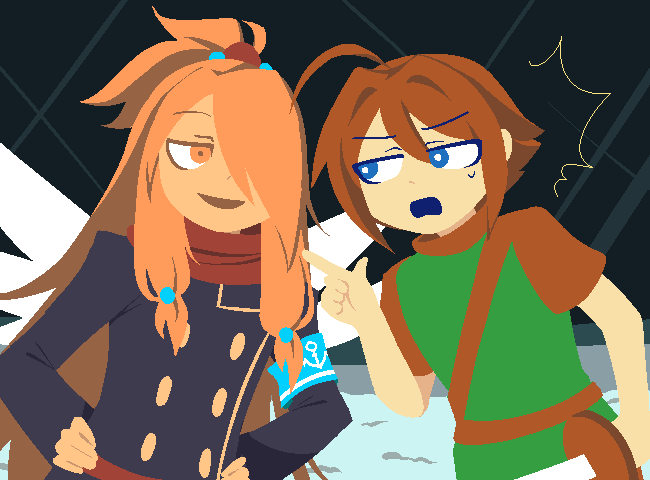 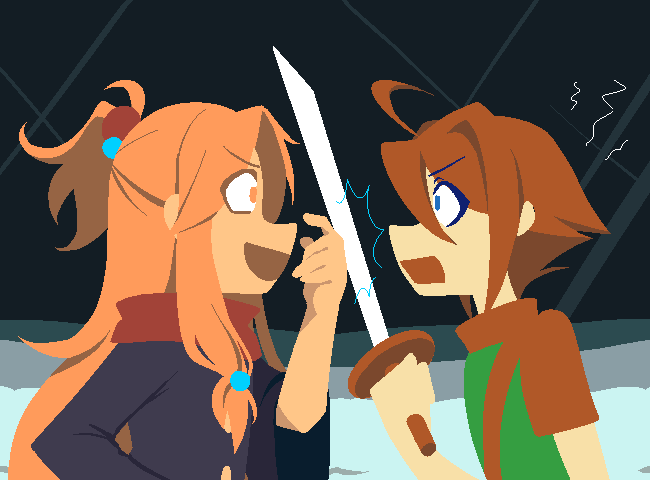 Nino: What if Kaji is just holding you here while he waits for royal soldiers to arrive? 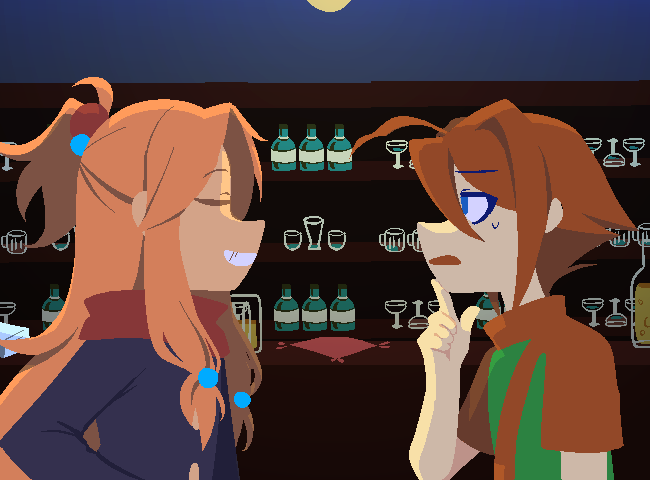 Nino: Apologize for what you did to him. 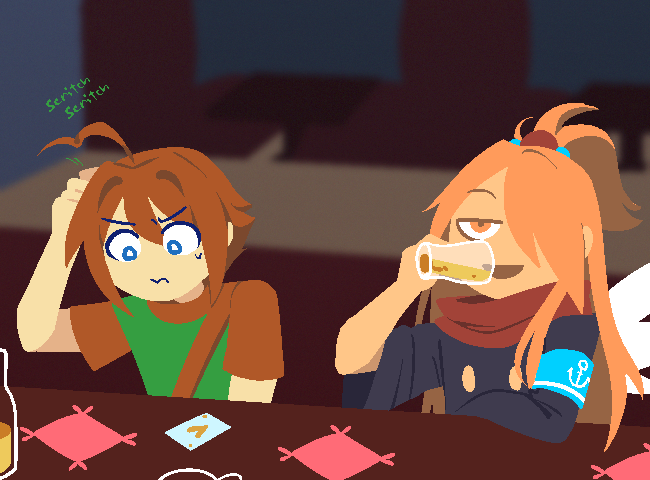 Ok sure you're just going to get absolutely destroyed and consume copious amounts of unidentified drinks like a cool fucking adult. Down the hatch it goes, best drink of your goddamn life. You start double-fisting drinks of all kinds, even. Delicious. A truly fitting brand new start for a little man to have on this little island.

Just kidding, no way in hell you'd do any of that, stupid!!!

This guy right next to you could be just biding his time until you let your guard down by doing something stupid like that!!

Also, you're not old enough to drink, not that you want to.
...So why did you even imagine it!? Stupid!!

Just to check, you ask Kaji how old he is, and he says he's about 29, and you say, holy shit grandpa what the fuck. His lack of reaction tells you that he didn't hear that last part. He also doesn't look that old at all. Goddamn winged and their eternal youthful appearance stretching over a 300-year long lifespan, or whatever.

Nino: Forget that. Instead, ask Kaji about his superiors. 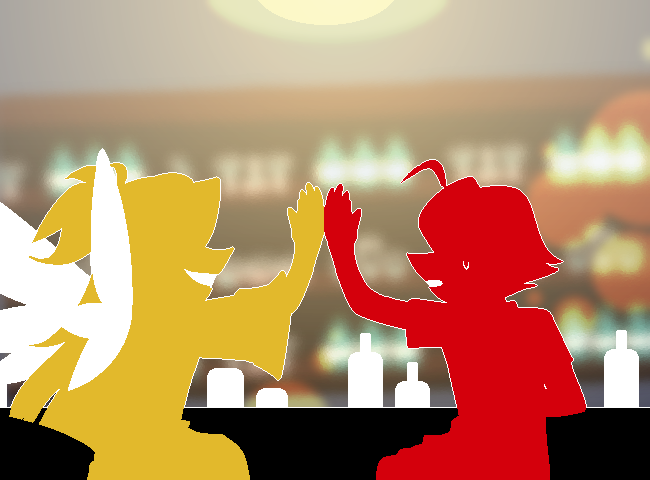 What are you now, his non-drinking drinking buddy? Jeez, talk about careless!
You're not going to leave a bro hangin' though, that'd be going too far.

Anyway. You are by no means a careless person, you think. You had your suspicions about walking into a trap, and yet... this guy does not feel like a threat at all if he's acting this way. You feel like there's no logic-ing his actions out.

When you got to the island, you kept a close eye on Kaji. He never took the chance to contact anyone to betray you somehow, and now, here he is, drinking and complaining to you about a bunch of crap in his daily life. This is beyond letting one's guard down, isn't he being kind of irresponsible, too? If that serious superior of his saw this display, you bet she'd be even more disappointed than he thinks.

In hindsight... his lax attitude may be why everything worked out the way it did.
After all, had he been more of a stickler for rules, then he'd never have been convinced to break a law in your favor.

Today, you learned that Kaji is the type of person who makes no sense to you.

Nino: Ask him what he meant about you looking like a noble. 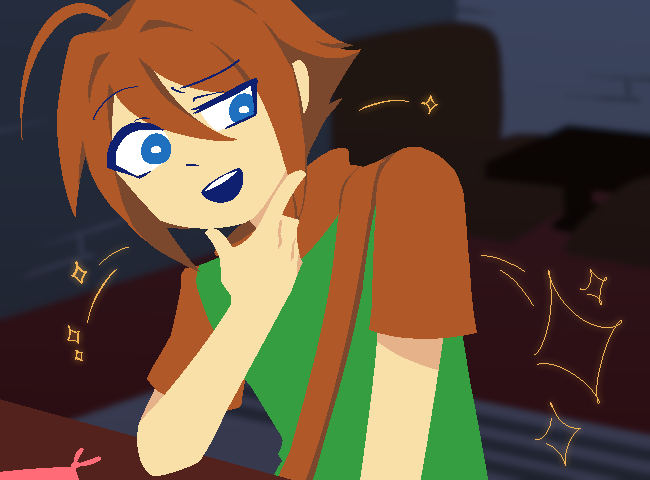 Nino: Give Kaji his stuff back. 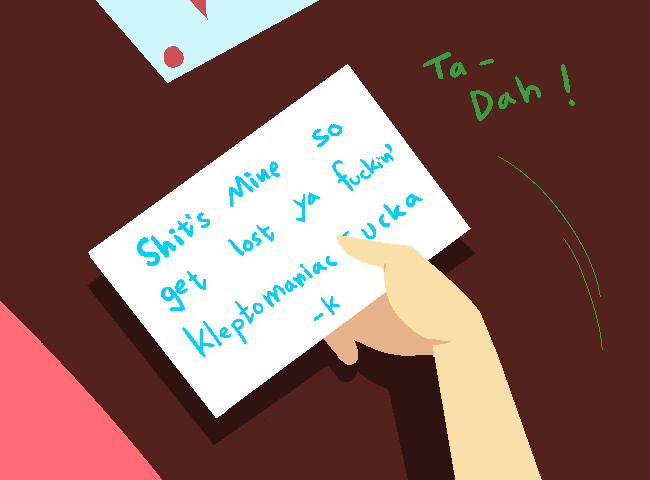 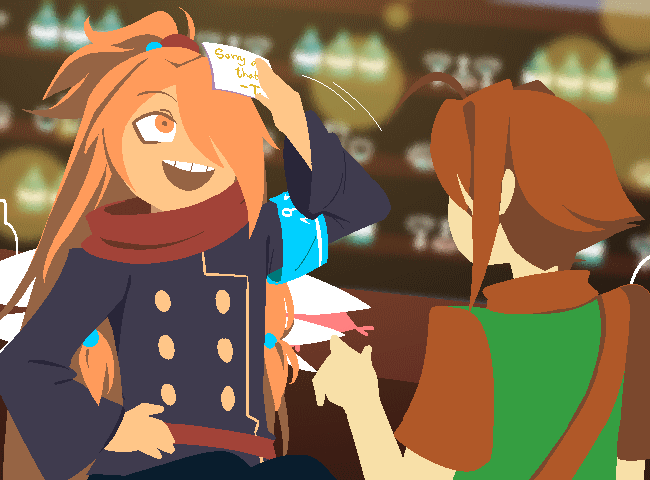 You suddenly feel that something here is off.
Huh... is it just your imagination?
Nino: Hesitantly inquire. Get the deets.
Subscribe
Login
5 Comments
Oldest
Newest Most Voted
Inline Feedbacks
View all comments

Nino: Hesitantly inquire. Get tha dirty deets on Kaji but also like position yourself close to the door because shit's gettin fucky

Nino: Listen, but if something goes too wrong, to the point that you will likely be physically harmed or detained in prison, you can likely get others on your side by acting very confused or shocked due to their opinion of Kaji likely not changing too rapidly, him being drunk, and you being perceived as a newcomer. You can also stab yourself with your sword and run, healing the harm caused later on, or just threaten with your sword and run. Only do it as a very last resort until one of those scenarios occur though. Until then, listen to him quietly, asking only a few questions if you need to, and perhaps let him keep the two-sided note if he truly wishes for it.

Kaji: Reminiscence those fond memories of the note

Nino: Realize how hot Kaji is and question your sexuality