He doesn't seem overwhelmed to you, but maybe you can fix that.

You're not that weak, and he's not that strong. You can take him on.
And even though most of your quote-unquote reinforcements' capabilities are unknown, they're bound to be useful in some way, and quantity's still a great advantage.

But before any of that, you have to say something very important.
It’s been nagging at you for a while now.

Kaji: It seems like everyone's ignoring you. Assert yourself!

Nino: Diplomacy. Point out that he's outnumbered if you all really have to fight. 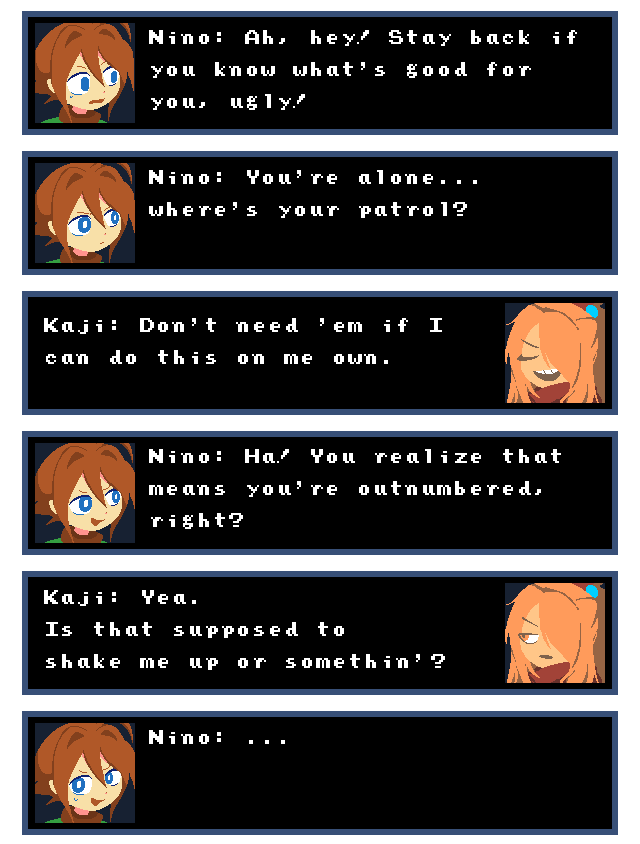 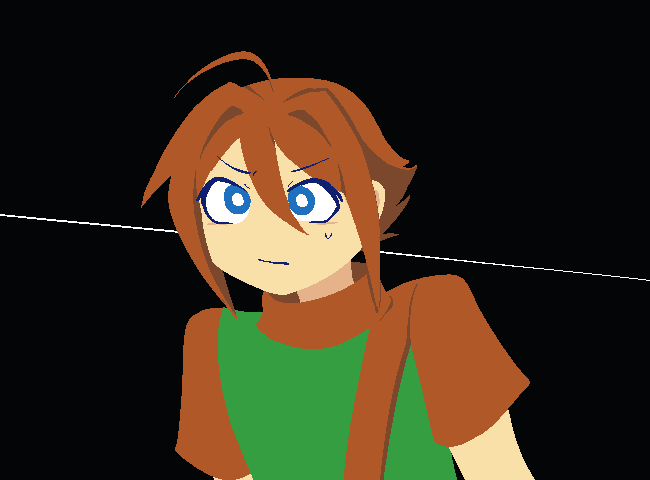 Dammit, how can he be so casual about this!

You expected a hissy fit, not this confidently nonchalant response.

Intimidation tactics seem futile here, but really, you're just buying a little bit of time until that kid gets to safety. 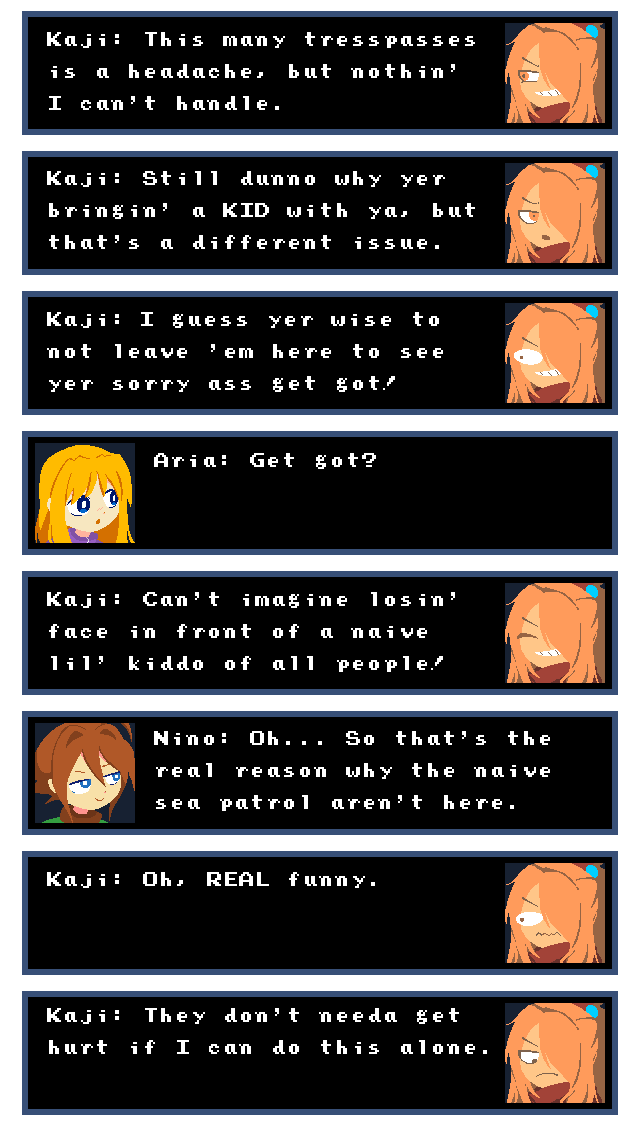 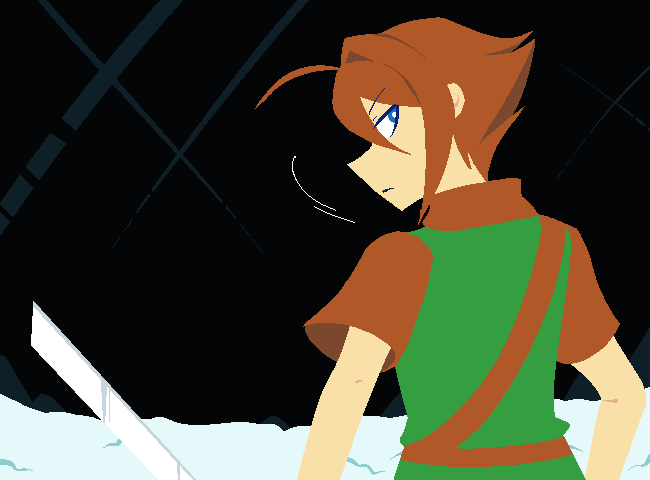 This is good enough, right? That kid is nowhere in sight.
That means you can finally start kicking his ass safely, this damn arrogant pirate.

Kaji might think he's doing the noble thing by avoiding damage to his subordinates, but he's just being stupid if he really thinks he can win this alone.

He's not as hostile as your previous opponent was, though.

Party: Do the teamwork! 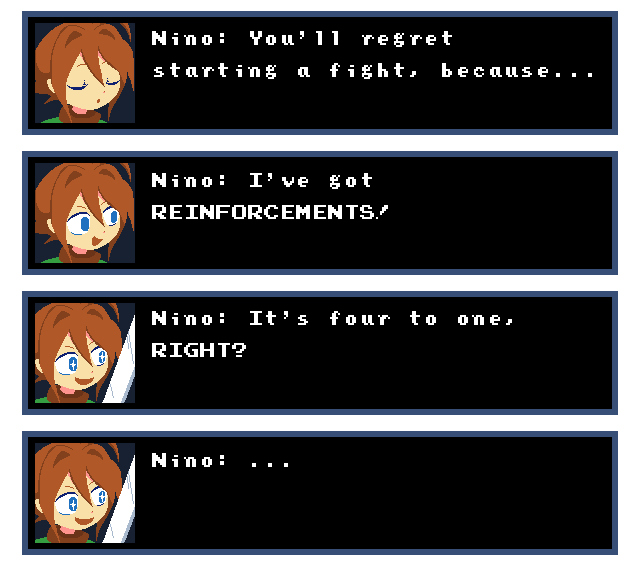 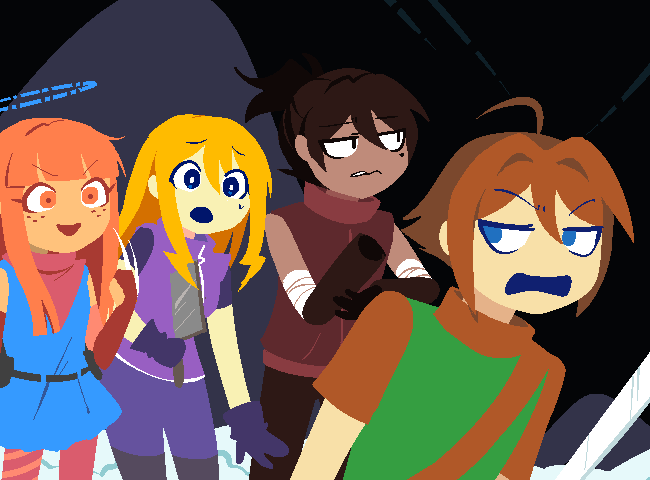 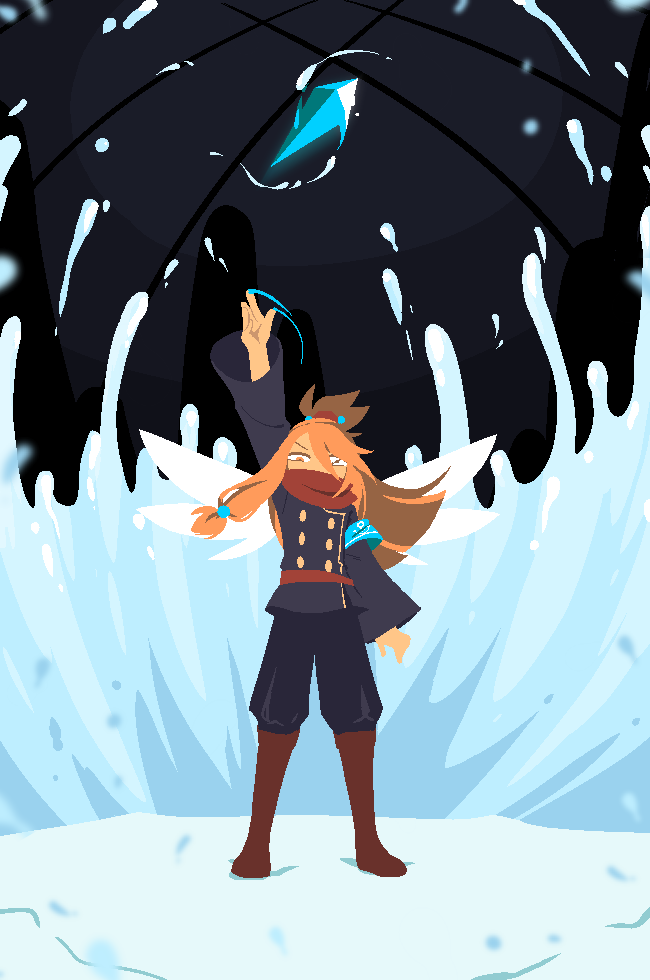 Next update will be the end of chapter 2. I know it's been a long long time, but it's wrapping up now!
The end of a chapter is a big update, so it will take a while to go up. In the meantime, there's a new addition to the website to help keep things somewhat fresh while work is being done on the next update: An art gallery!

Check it here for more info: https://oceanfalls.net/gallery (or via the sidebar link).
I'll update the gallery content from time to time, though it already has a ton of materials to kick it off, from old drawings to recent, and even some short comics. Hopefully it becomes something fun to browse every once a while! :]

After chapter 2 concludes there will be a short intermission (2), followed by the start of a new chapter (3). Thank you so much for reading thus far, I truly appreciate it.

Thanks for the awesome webcomic you gave us!

Take all the time you need!

Guest
Anon (this time from Brazil)
Reply to  nights

Glad you're still making this, love the artwork and the story is very cute! please keep going, I'm very excited for the updates!

Nino: No more running away like coward then. Finish it, he followed you too quickly over the sea. COMBAT - ATTACK - SWORD - SLICE - SLICE - SLICE - STAB let instinct take over and go for the chest, with a flurry of quick slices to stun him and a stab to incapacitate him. along with making note of and paying attention to that crystal later. Knock him off guard or kill him, whatever it takes to get him off your back.

No more stalling. The fight will start now!
Great update!

Mei: That crystal looks pretty important, maybe you should borrow it, it isn't like he's gonna use it for anything good anyways.

Nino: No matter how confident you are, fighting a hydromancer by an ocean probably isn't the best idea...Though it's not like you have many options to retreat to. Maybe up the mountain?

In other news, love the comic and the new gallery. Your art's always so pretty, and the worldbuilding's really engaging.

Sea when its time: Oceanfall

Okay. I just got finished updating ThiefNet. Now Sly finally has the ability to use smoke bombs! B}