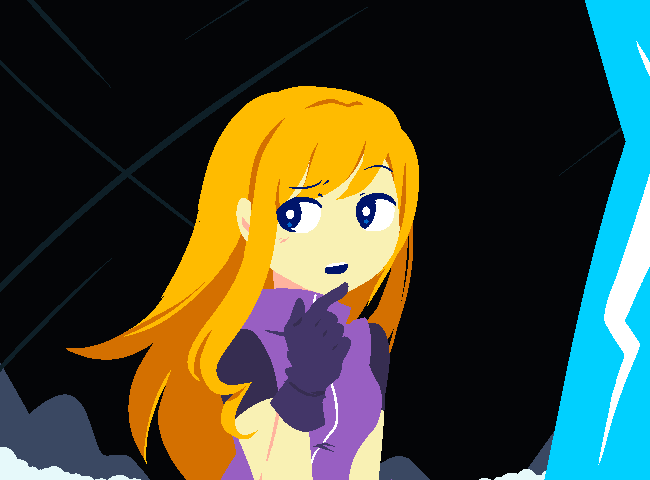 Mei: Don't let anything show on your face. 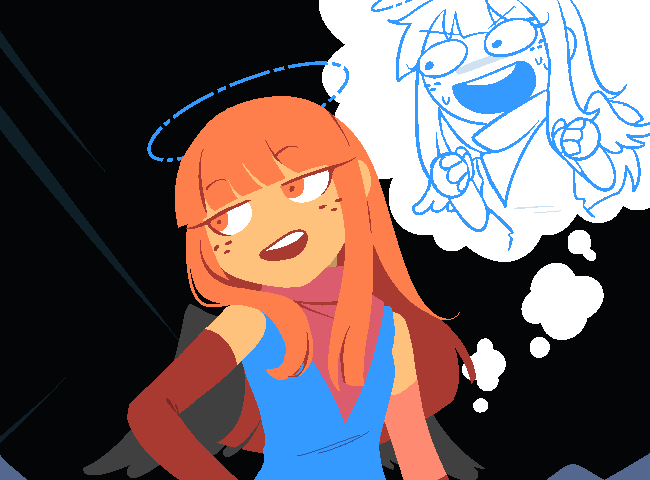 If you REALLY think about it, nothing you say is a lie if you succeed, so like...
You're still a pure angel, retroactively free of sin, as good as a newborn. 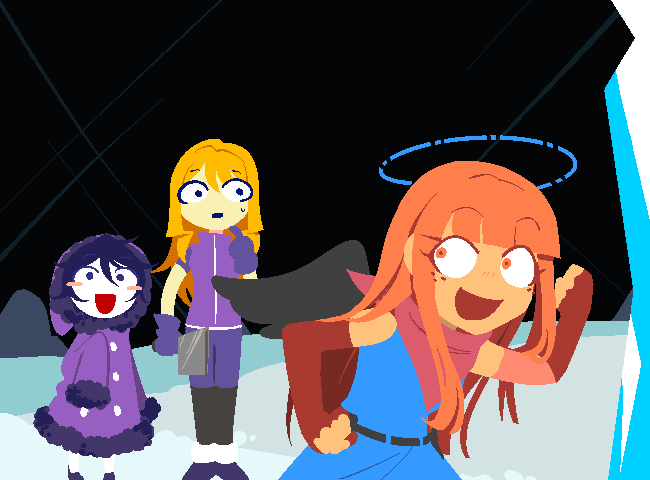 THAT'S RIGHT, NICE TO MEET YOU, MISS ARIA, BUT YOU GOTTA MOVE FAST SO THAT THERE'S NO ROOM FOR ANYONE TO BACK OUT NOW.
Kaji: That's enough of this tomfoolery. 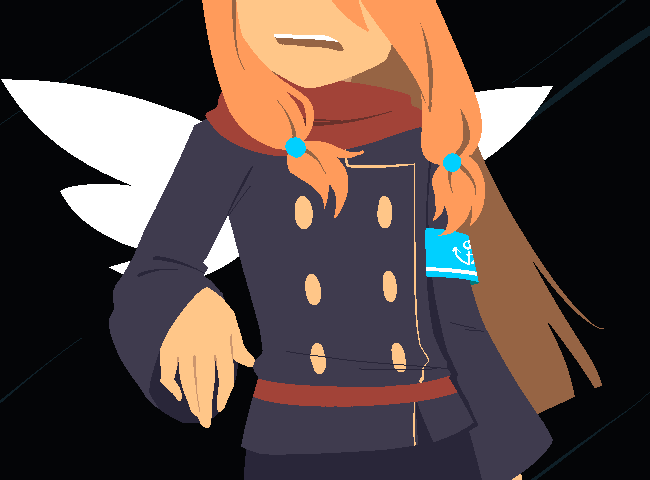 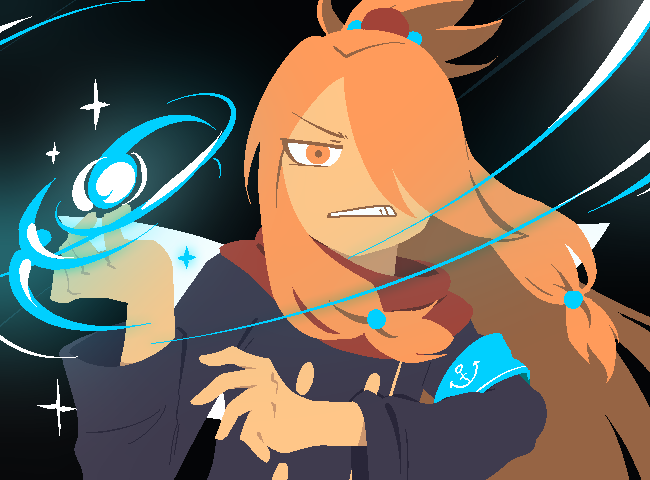 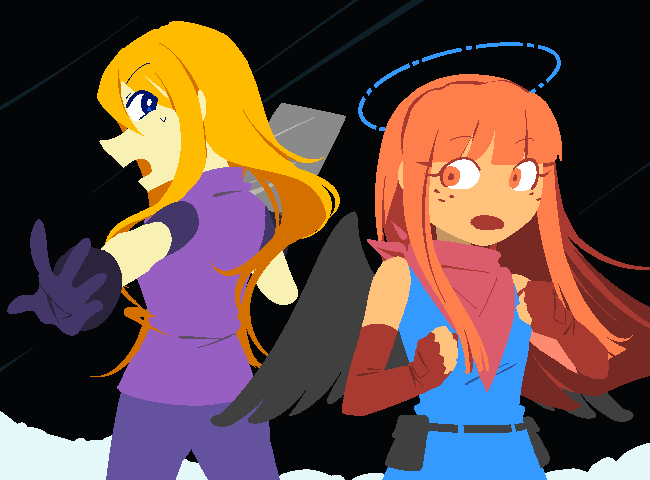 The stage has been set, and all bets are off. 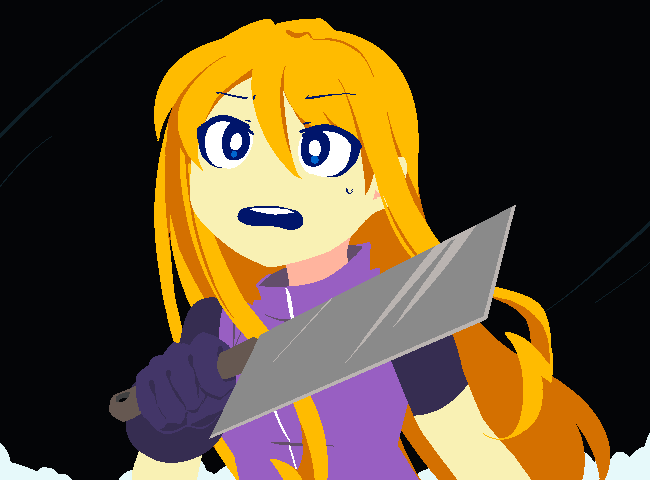 You trust Aria well enough to watch your back.
Hopefully, she also trusts you enough to let this work out. 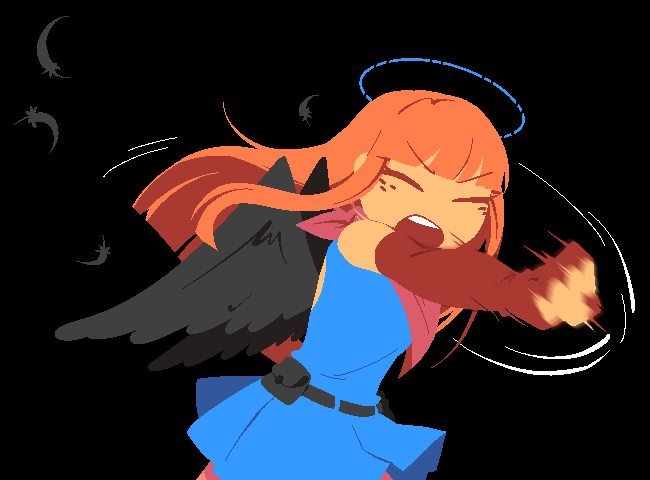 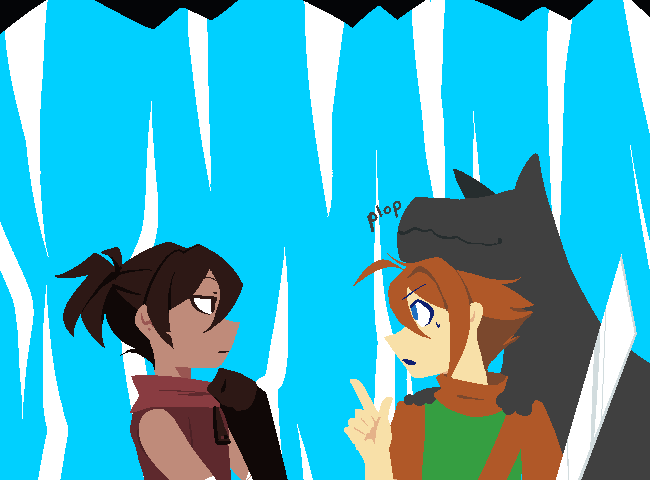 YOU DON'T WANT TO END UP WITH BLOODY KNUCKLES, PLEASE! 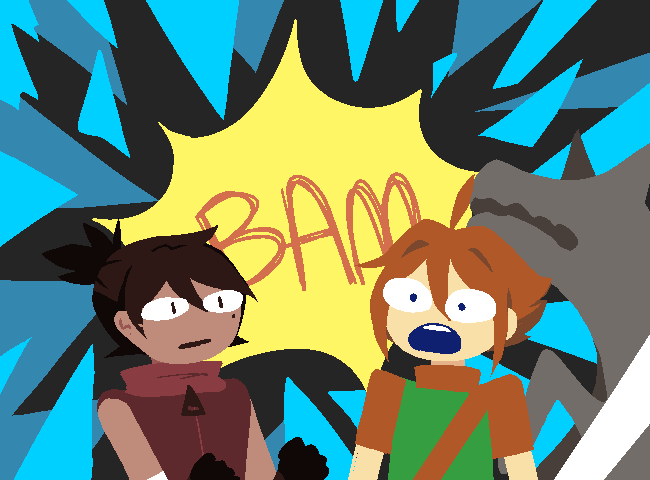 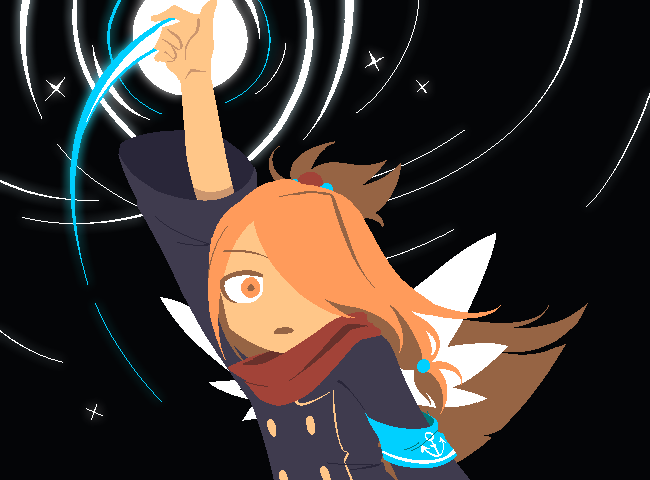 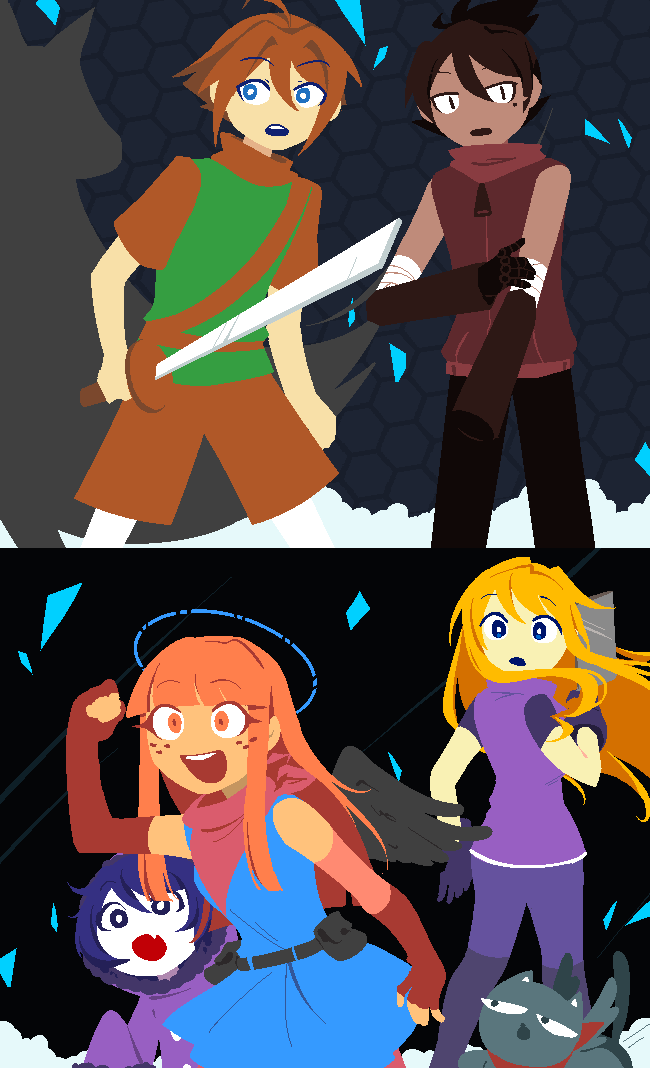 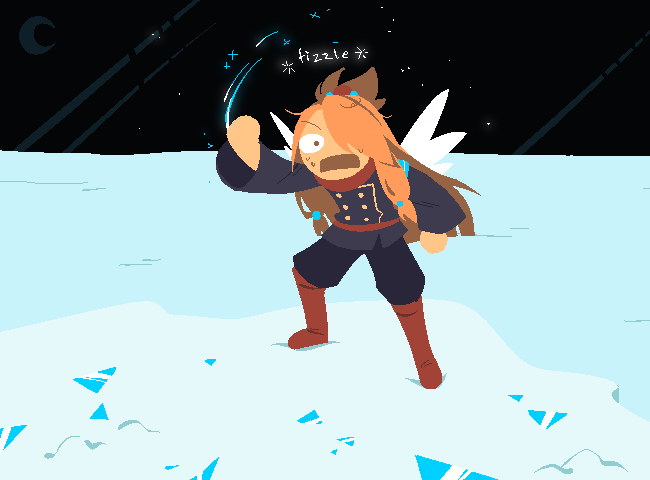 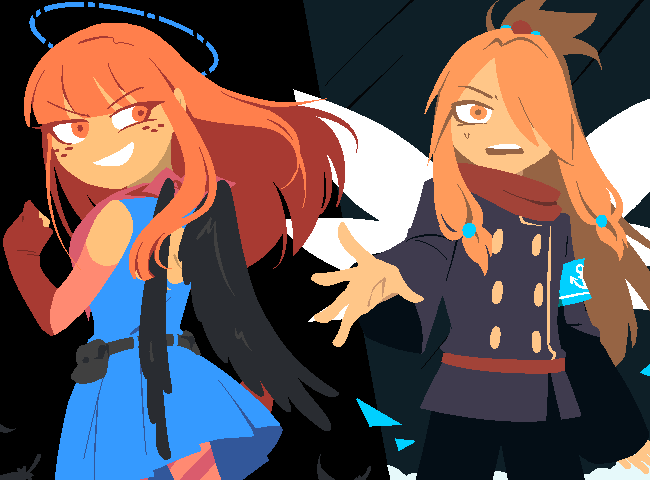 See that? In your face, Kaji!

Oh, what a great expression that is. You'd recognize that look anywhere.
It's the face of someone who'd just realized that no matter what gift they were born with, it's bound to be nothing compared to what others have worked for.

It's a lovely look to see on anyone who takes their unearned powers for granted.

You don't know how Kaji's able to use an ability without a halo, but that bitter confusion certainly confirms it's not at all a result of hard work.

The crow, an omen of misfortune, is an undesired constellation for the winged.
But look now, how you've turned it to be your very own labor of favorable luck. Any high and mighty winged would've sneered at you simply for being a child of Corvus, yet, one look at this and they'd fight each other to have you as an underling.

Mei: Okay, okay, dial back on the overconfidence a little. 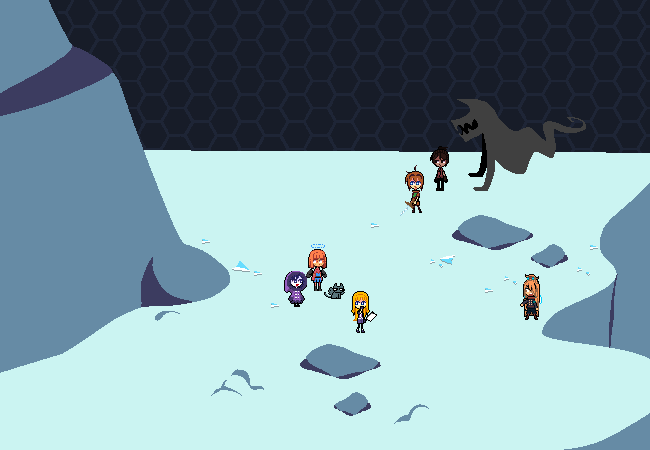 Ehh, uhh.
Well, sure, what you did may just be a minor stunt, for the most part.

But at least it was enough that Kaji stopped whatever he was trying to do! That saved Aria and her pale little friend some trouble, right?

And, of course there are still countless more impressive winged out there with fortunate powers from birth that'd make you look like a joke, but- 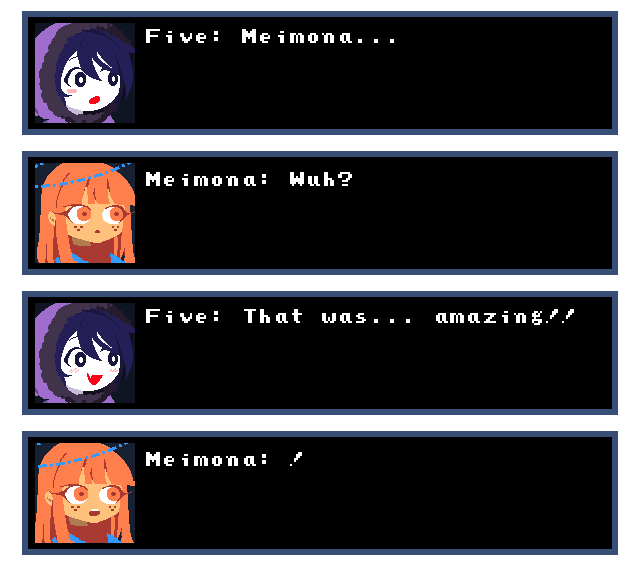 But... it's still something, right?
You can be a little proud if it made the kid THIS happy, right!? 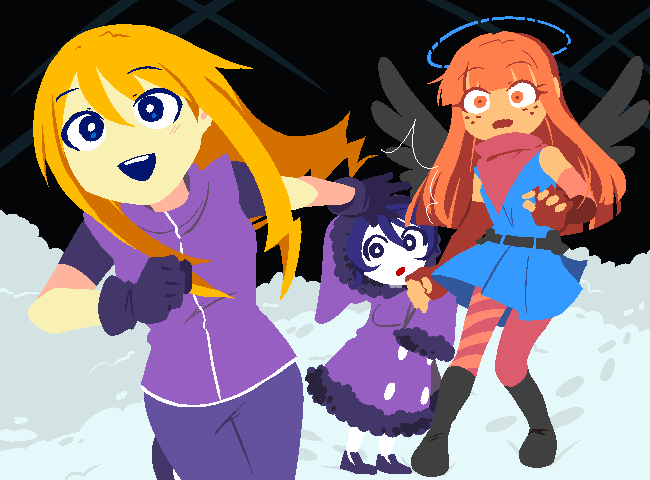 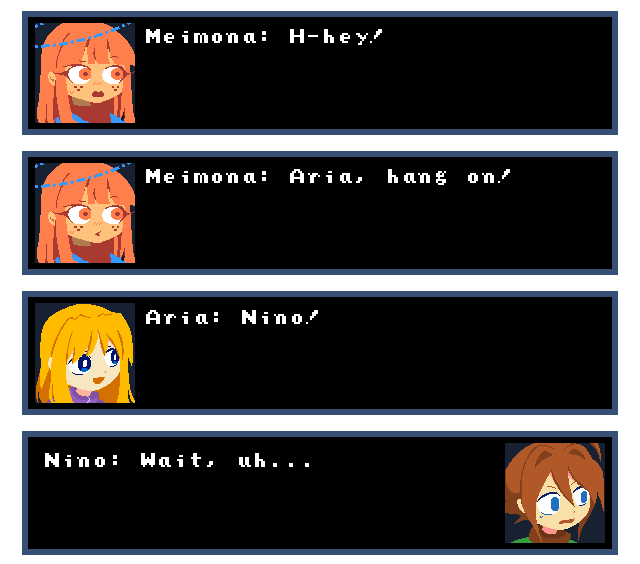 Aria: Jeez, slow down a little and realize the position you're in. 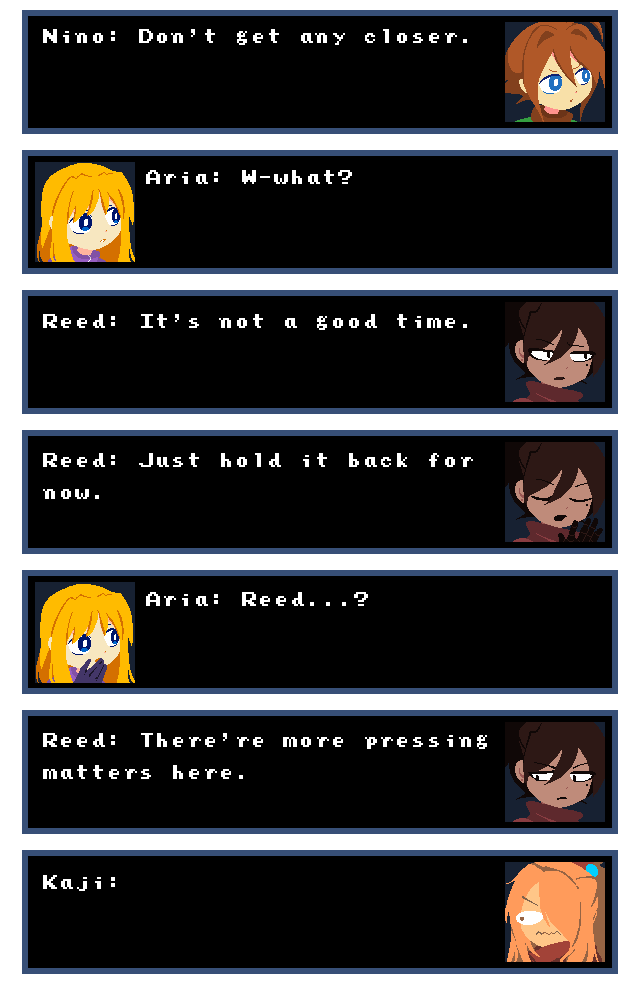 Nino: Do you know Reed from your past? 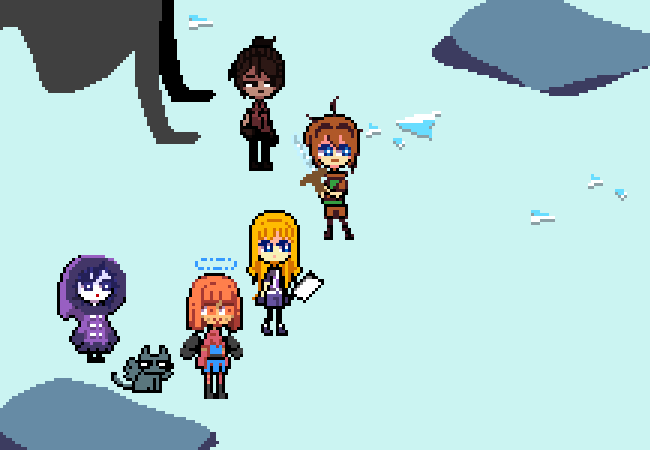 No... Well, it's not like you'd remember if so. However, he didn't know you, so you've obviously never met before.

Still, he had a lot of useful information to exchange. Not only that, but you convinced him to help you out! And just as he predicted during your conversation, his blonde friend(?) seems to be on board, although not in a way you understand yet. It looks like Mei would vouch for this girl if you asked, so she'll probably be a good ally regardless.

Reed also took the time to convince you that, in fact, this girl whose name is Aria does not want to kill you, nor is she even capable of killing in the first place.

You said you'd believe it once you've seen it, and he called you a strikingly colorful insult for not just blindly listening to him. The sheer gall of this dude. You didn't really protest though, since Reed dubbing you some manner of a massive idiot was like white noise at that point.

He pressured you to promise that you wouldn't get "needlessly" freaked out by Aria again. But no matter what, talking to someone who acts like they know you even though you've never met before is bound to be freaky! So, the easiest way to hold that promise is to just not talk to her for now.

Although neither of you know what she wants, you both agreed that it'll have to wait.

Well then, it was surely a very informative(!) and hilarious(?) exchange the two of you had, which we'll never get to read any lines of, other than a mere concise summary of your personal conclusion. And thusly, to present that humble conclusion:

You have all the help you'll need right here.

As long as you can effectively deal with each one's colorful personality, that is. 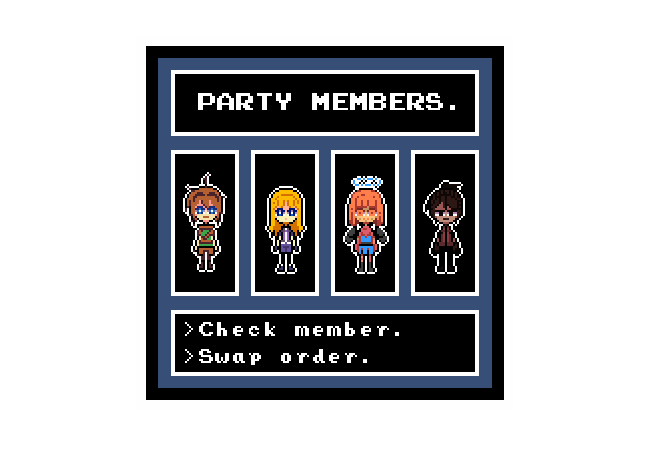 It is just as you suspected.
At last, every slot has been filled.

Somehow, the order feels a little wrong, but you're not sure why...

Anyway, talking with Reed helped clarify more than a few necessary details about your new party members! You don't know everything about everyone yet, but you feel like you have a good idea of your party's capabilities for the time being.

Nino: Time to see all that juicy statistical info, then. 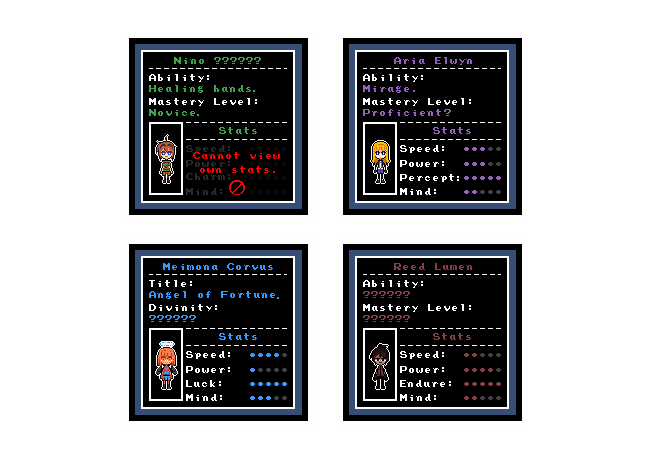 Even though it's hard to quantify where you stand compared to everyone else, it's probably all good as long as you can get them to work together. Yeah, you're dead set on wrangling each and every one of them to cooperate here.

You're all in this together, after all.

Although Reed told you a lot about his ally, he opted to keep some of his own secrets. You don't know anything about his ability, only that he's plenty capable and experienced in combat. Well, that's all that matters right now, you suppose.

And... about your opponent, Kaji.

Kaji is not an idiot.

...Okay well, that is to say, he's not as much of an idiot as you thought.
And more importantly, he's not looking as weak as Mei made him out to be, either.

Kaji reacted quick, and had the foresight to intentionally split up the people working together as soon as there was a chance for it. That was a smart way to throw you off, but thankfully, Mei was able to make things work out on her side just as you did. Must've been through her luck shenanigans again!

Now, you may have foiled Kaji's makeshift plan, and he may be vastly outnumbered, but still. You're not going to take him lightly.

Ludwig: WHERE ARE YOU FIND FRIEND FAST 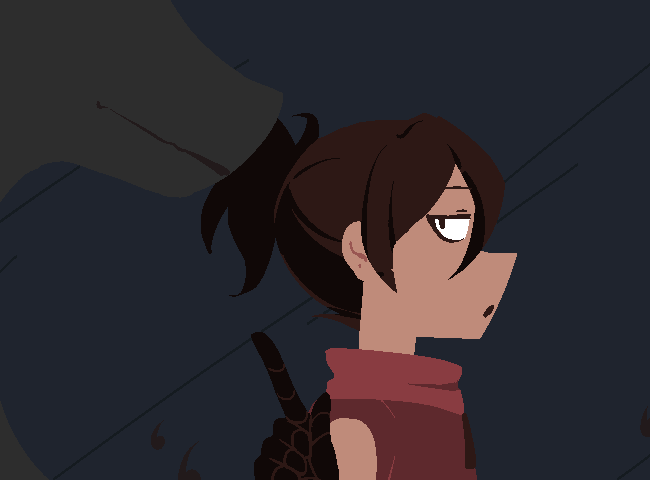 That's dog speak for hey, you're right here.
Just in case you were wondering what that means.

The human in ruby-red beckons you and whispers a request.
He commands you in a manner much like master's. He's observed her habits well, indeed.

He wants you to do just as you've been doing before. 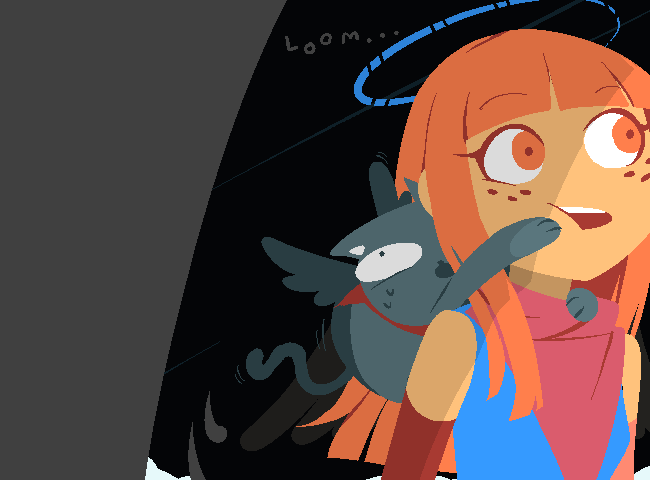 That's cat speak for WOW, there's a terrifying nightmarish beast towering over you.
Just in case you were wondering what that means.

The ingenuous little lass had better protect your precious life at all costs. Well, she probably will if it comes down to it... not that you're clinging to her because you're scared or something!

Meow... And why is it taking her so long to react to this stealthy beast? Must you always be there purring and hissing to alert her to such creeping dangers?

Why, this owner of yours would be utterly hopeless without your furry presence.

Ludwig: Be a good boy. 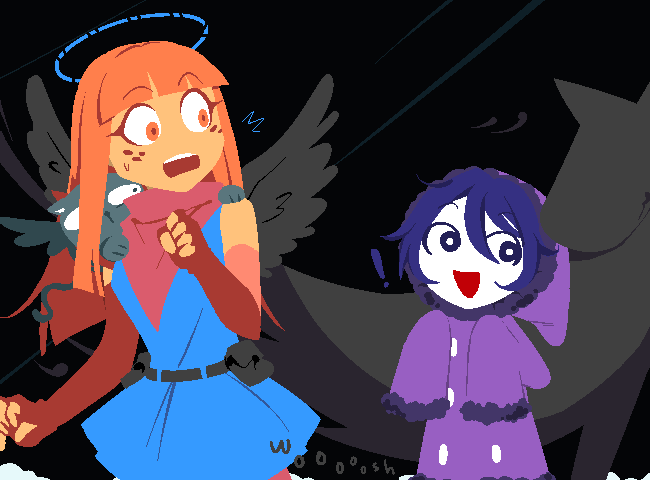 Aria: You forgot to disguise Ludwig! 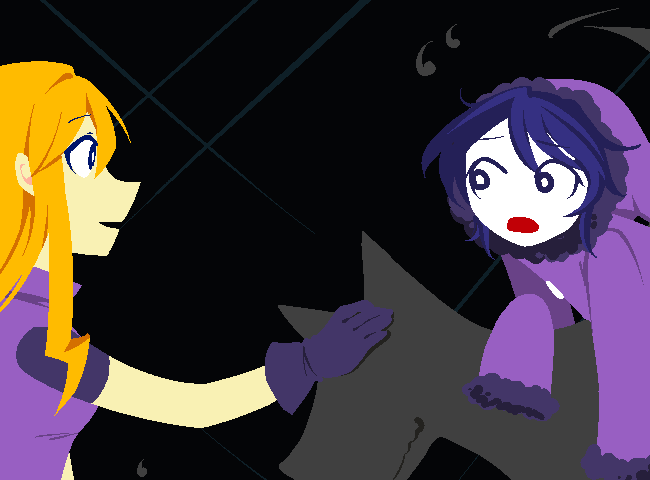 ...is what you'd say, if it were even possible to disguise Ludwig in a nice manner.

He's only half-corporeal! There's not much to work with here, and anybody would be terrified to see just the half body of a regular dog walking around. Gosh, seeing his actual ghost doggy form is less terrifying than that, for sure.

Your companion trusts Reed a lot to heed his command.

Or maybe, he just knows that Reed's request is the same thing you'd ask of him.

Last time you told her it would be fine just like this, but...
It's hard to keep promises by yourself, but this one won't be broken again, surely...

Aria: You need to be reassuring enough for this. 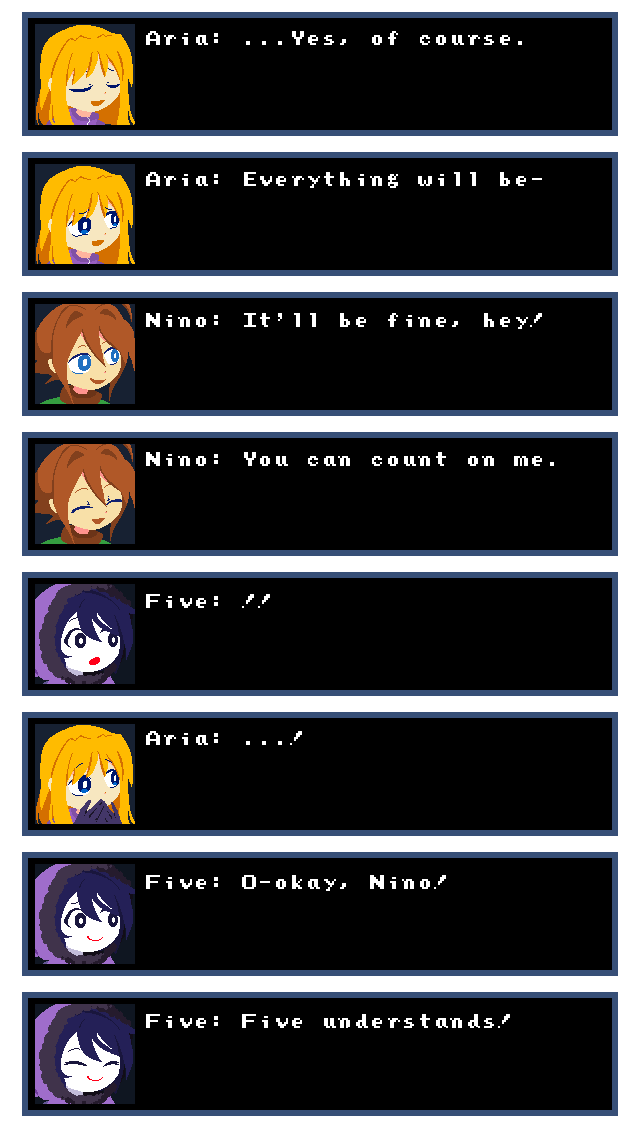 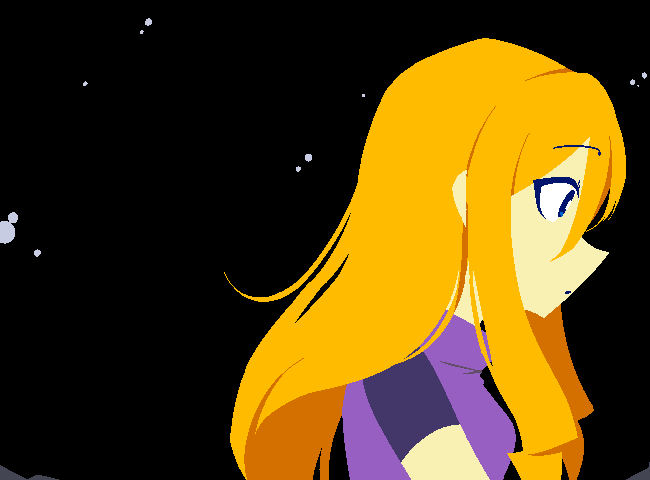 Somehow, his promises are far easier to trust compared to yours.
From someone like that, a few words is all it takes.

For a moment, you wonder if it's okay to feel like you're not alone anymore, or would that just lead towards an inevitable sense of betrayal.

Don’t worry I’ve actually played a game of SWN for the last 6 years until we got our entire party together.

>Kaji: It seems like everyone's ignoring you. Assert yourself!

Five: Listen to Nino, he didn't leave you. Ludwig/Boyfriend: Guard the kid. Reed: COMBAT - ATTACK - Rush this guy and keep him on the defensive, don't give him a break. Mei: COMBAT - DEFEND - Distract Kaji with your speed and keep him on his toes as a distraction, with your luck you can dodge or counter his ice shards, and break his walls. Your work won't go to waste. Aria: No time to reflect now, COMBAT - DEFEND - Guard everyone, and watch for other threats against your friends. Nino: COMBAT - ATTACK - Try checking Kaji's stats… Read more »

I wonder if Nino will ever recover from his new amnesia... he, Five and Aria went through a lot together :'> Poor Aria...

Party: Do the teamwork!
Nino: Front and Center, you're the main fighter, so get some good hits in
Mei: Be the dashing rogue, dance around Kaji and make quick strikes whenever you can. Make sure you use some cool one-liners to both distract and be badass.
Reed: The others seem mildly competent, stat in the back, firing shots with your gun-arm thingy whenever possible.
Aria: Be observant, stand behind Nino and watch for attacks and weaknesses, rush in to fend off attacks and capitalize on those weaknesses.
Kaji: Be overwhelmed.

Happy 5 year anniversary! It's crazy that it's been this long. I can't wait to see where we're at in another 5 years!

You don't have take this post into consideration, Nights. I want to take a couple pages off from requests and just be surprised by what comes up.

I wonder when Nino will have his next seizure, possibly from being familiar with Aria and Five.

Edit: by the by I love the story so far.

Nino: Diplomacy: Ask Kaji why he's attacking people, including a kid, instead of trying to detain them, and if you all really have to fight. If that doesn't work point out that he's outnumbered.

Aria: You shouldn't worry, Nino somehow managed to come back from dealing with a monster royal guard, he won't be singing his swan song anytime soon. Besides, Five and Ludwig are relying on you!