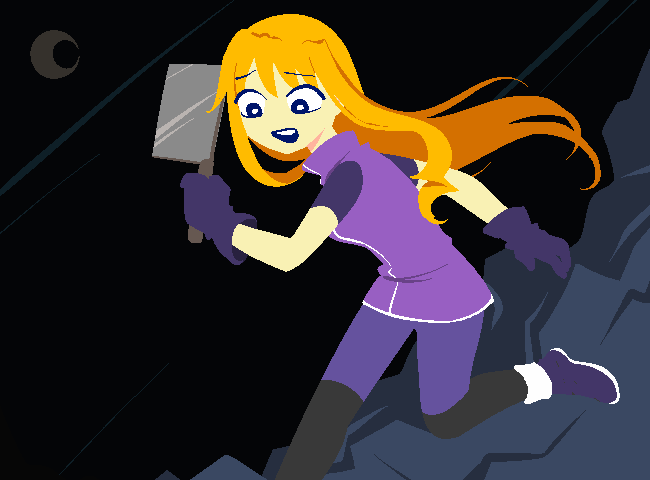 He's right there, that's DEFINITELY him! And some other people too, but you don't even begin to notice anything about them or the situation other than NINO. HE'S ALIVE, OH GOSH. YOU DON'T KNOW HOW, BUT NONTHELESS, YOU RESTATE:

THIS IS JUST THE BEST THING EVER! 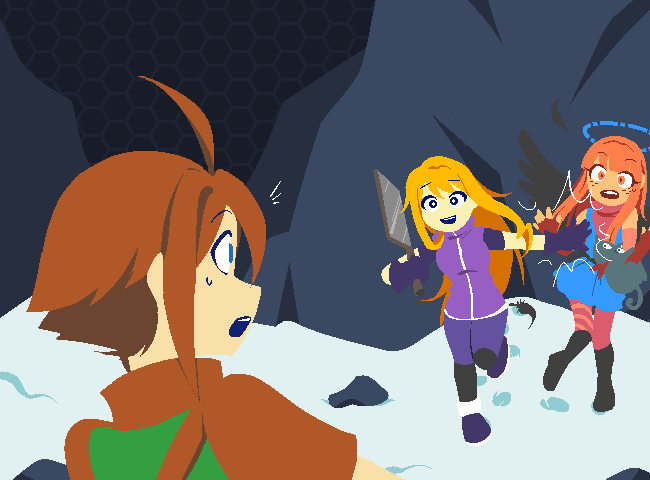 THERE IS NO POSSIBLILITY OF SLOWING DOWN NOW.
EVERYTHING here needs to politely get out of your way. 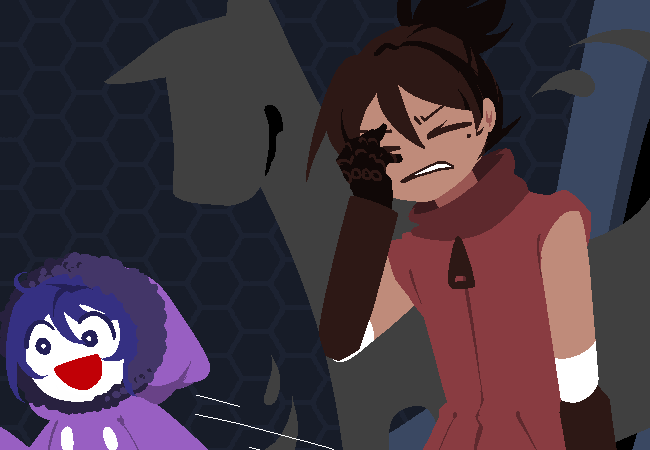 This is just the worst thing ever.

Just why did she run off like that. It's like she couldn't even hear you telling her "we should turn back immediately" as soon as you laid your eyes on this scene.
You expected nobody to be here.

But it's too late now.

You have a feeling this is going to be the biggest mess you'll ever encounter. 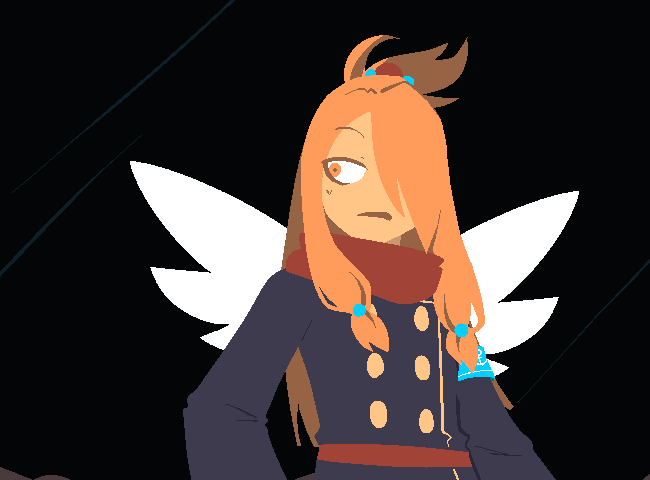 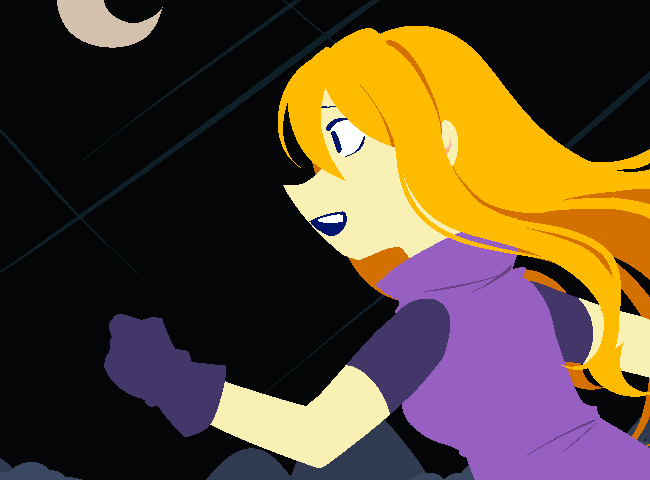 Kaji: This could be a problem. 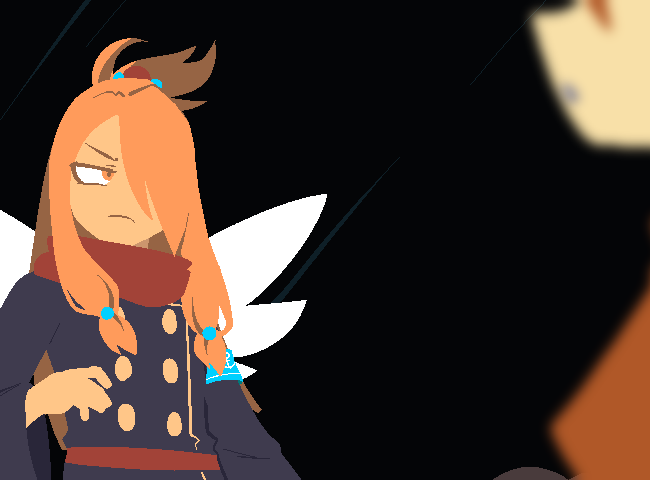 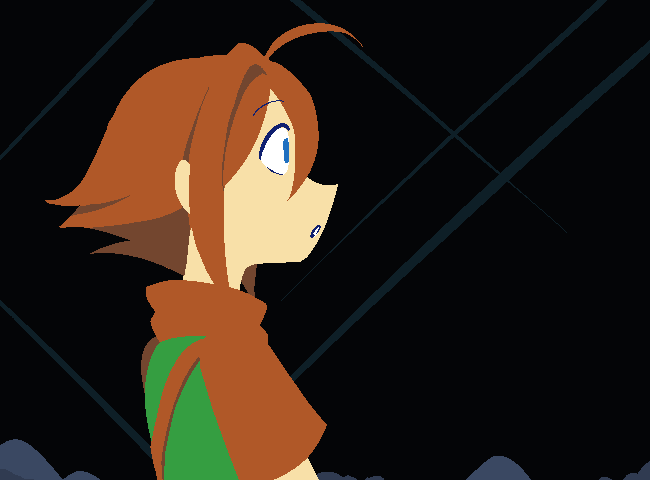 You'd ask why she knows your name, but what's more important is why she's yelling it while waving a HATCHET around.

Nino: Stay on guard! Kaji and his crew are still behind you. 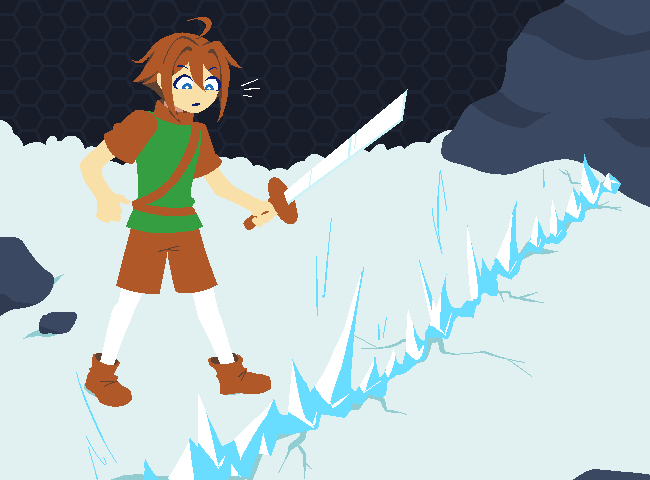 That's another thing to think about, but this girl is running so fast towards you that you can't even process- 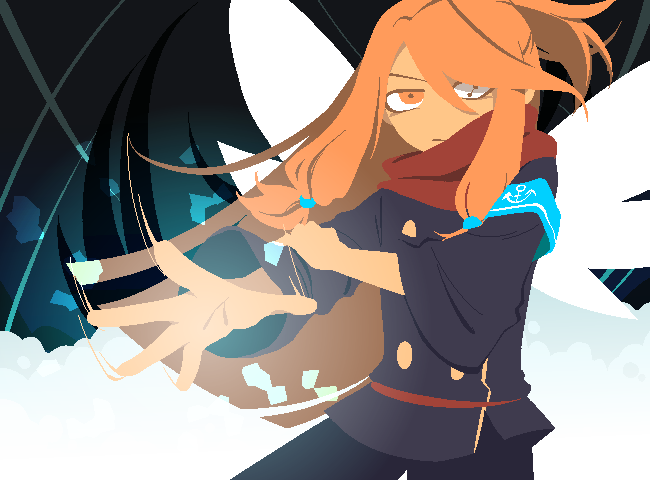 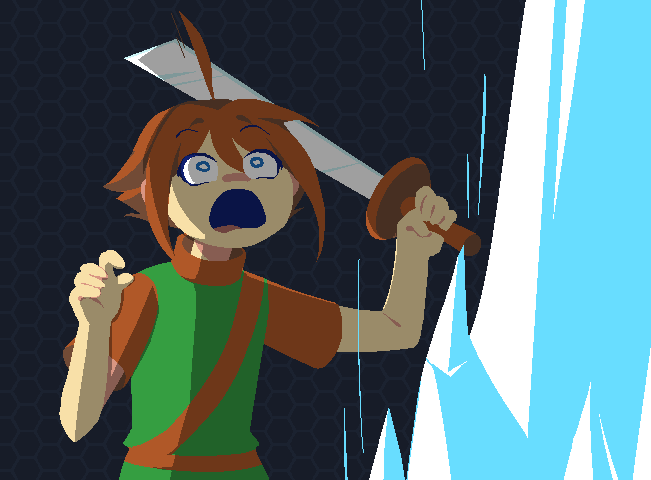 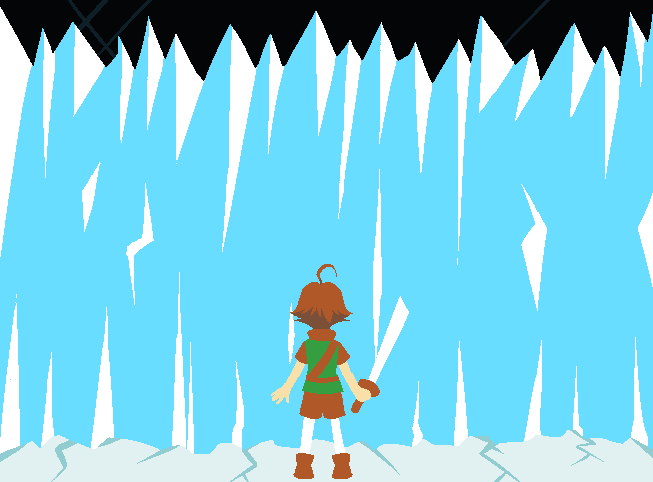 In the blink of an eye, something happened.
Where did this come from? And, oh jeez, if you were standing one step further, then would this... ice-y wall of icicles have impaled you? Yikes!

You hear a very loud thud mere moments after your shock subsides. 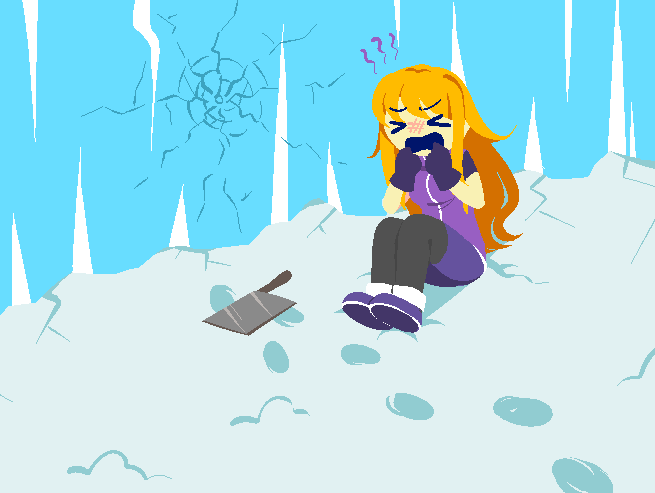 Sounds like someone took an ice wall to the face. 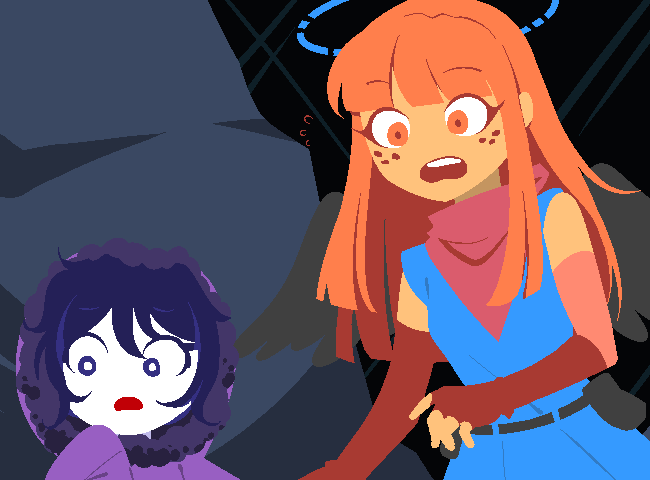 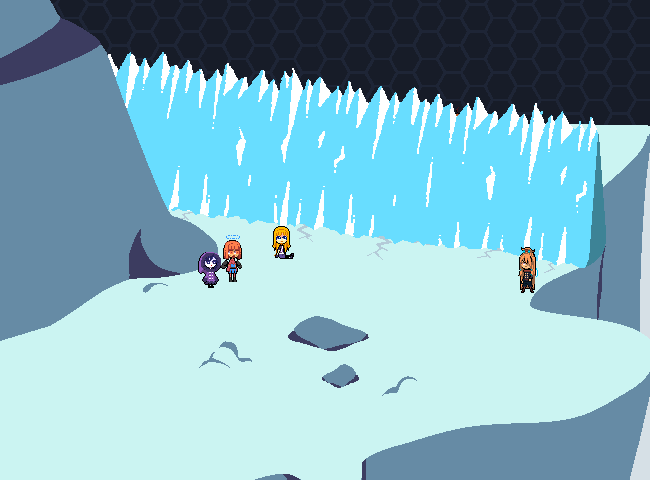 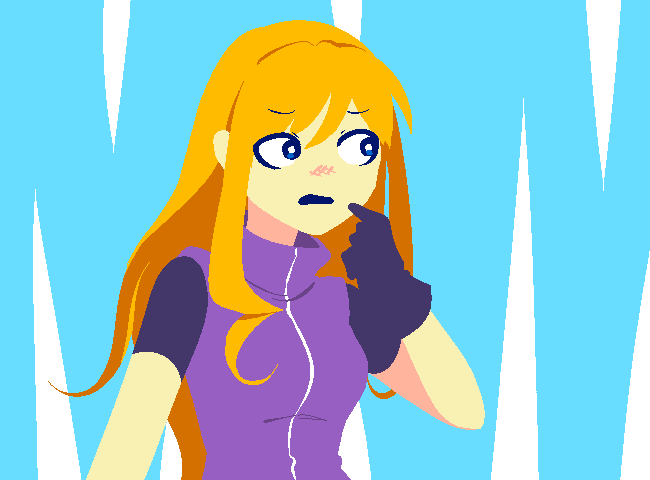 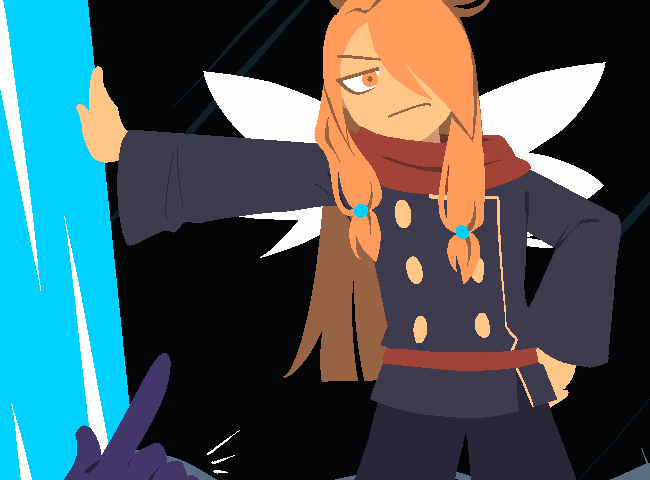 Aria: ...But you're not going to lose him again. 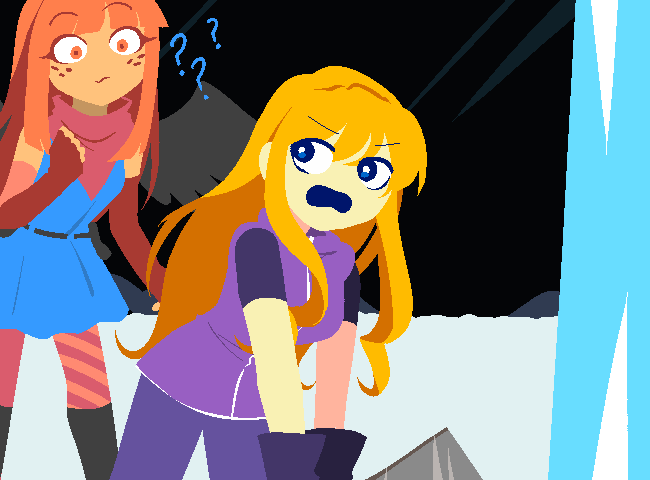 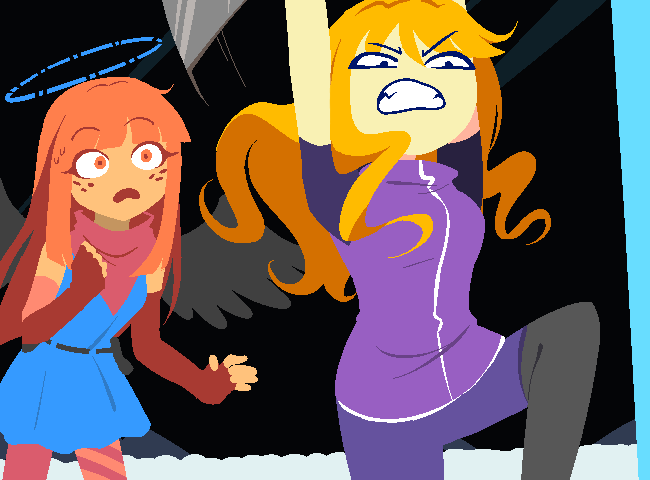 You are so confused and afraid right now.

Why does a random girl want to murder you with a hatchet.

She also KIND-OF looks like galactic princess Selene if you squint a little, which may PERHAPS make the prospect a little more appealing rather than completely HORRIFYING, if you weren't in sane mind. Fortunately, you definitely are, so this is alerting every single flight instinct in your body.

Yes, it's like you were born just to run as far away as possible from this girl.

Nino: And just where did she come from? 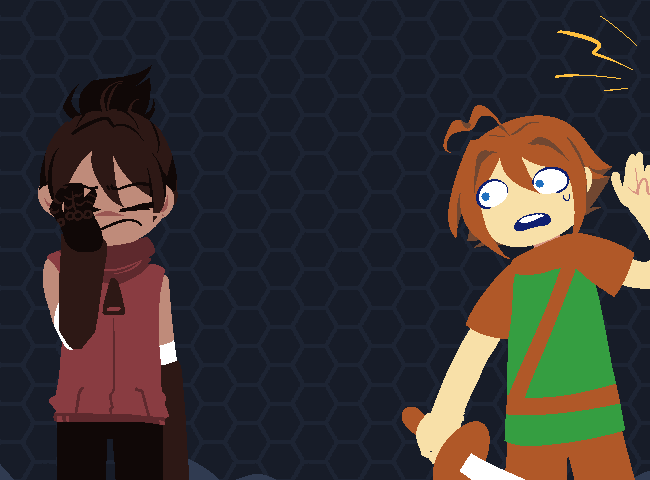 Yeah, she, and whomever THAT is.
This guy just walked down the mountain and now he's just standing there.
He does not look happy to be here in the slightest.

Does he want to murder you out of anger too.

Nino: Apologize and ask what is happening between this man and his family and if they want to murder you.

Nino: Can't run, Mei would kill you if you did.

Kaji: OK MAYBE YOU WERE A BIT IMPOLITE EXPLAIN THE UNLAWFUL CIRCUMSTANCES THESE CRIMINALS ARE IN AND HOPE YOU DON'T DIE

So... I'm now worrying that Nino might have been sacrificed before. Since it seems that he looses his memory when he died and comes back.

Or at least, the ritual was specifically designed because of him.

Maybe, blood loss is one of the things that the Aria explained could disrupt the ritual and it was about abilities which could save people from certain death, but thats crazy, its not like in the cave of illusions we saw many instances of dead Ninos considering illusions are based upon memory right? (Also, I just realized that they had to go to an execution chamber along with the other parts of the ritual, seriously, how desperate are these monsters?) Of course it could just be cruelty or precaution and Nino just has a very good ability which he is very ungrateful for.

Maybe the red text from his flashback is someone else, and their ability is reviving him. The ritual is designed so that the victim's ability can't save them, but seems a bit more iffy on outside sources.

Maybe, But its more likely that its a past Nino, considering how its obsessed with him not remembering, but then we wouldn't have cape Nino, but you do have a point, unless that winged was simply equaling the monsters and humans and Nino just happened to be the one that would make monsters greater numbers than humans, its unlikely that he could have lived naturally, but that winged may have also given him new life in the first place. Die again and again could be referring to him to, or again, his ability, because abilities are made by important thoughts, and Nino's thoughts at that moment were, I don't want to die, and I don't want my friends to die, for all we know, his final healing hands move is likely a revive spell, considering its 6 letters, the only letters of 6 relating to healing are remedy which he already has, revive, or savior.

post script, it isn't curing because he already had cure, and there is also Iatric, so thats 3 possibilities, 2 of them possibly being revival spells.

Five: Be the level headed adult and calmly explain the situation to these two angels.

Aria: You forgot to disguise Ludwig, Reed may be a brute, but he has a point, you need better stealth capabilities.

Ludwig: WHERE ARE YOU FIND FRIEND FAST

Reed: get a Reed on this guys stats.