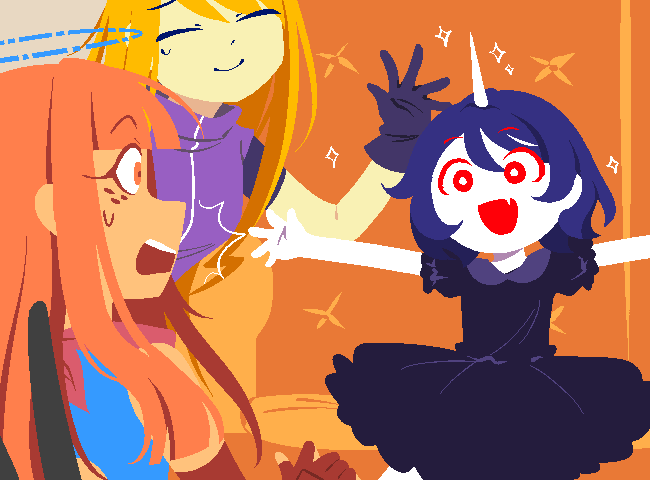 Nino: Not bad, not bad. So how and when did you figure it out?

Five: Hey! Nino remembered something! Admittedly, it's one relatively minor detail about Five's identity, but it's gotta count for something! 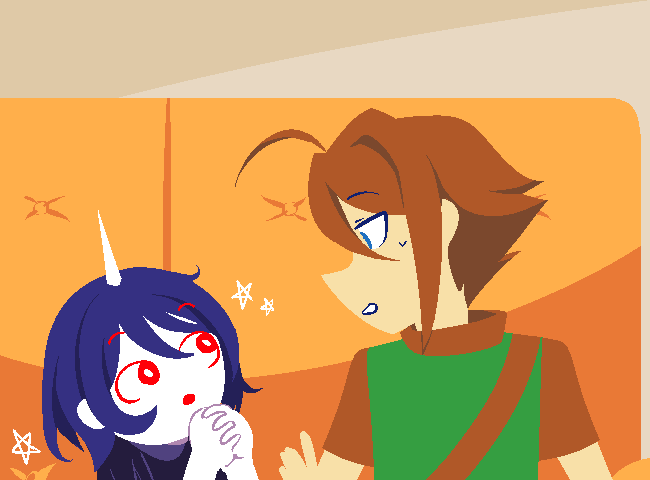 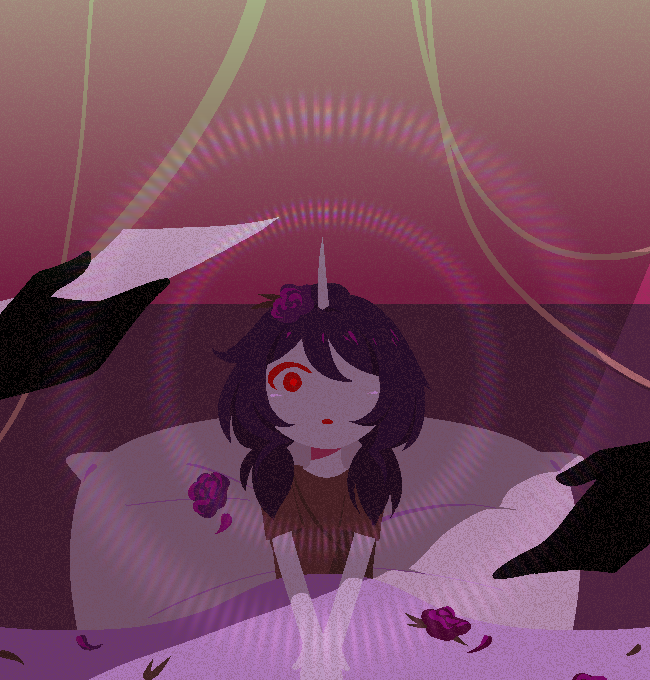 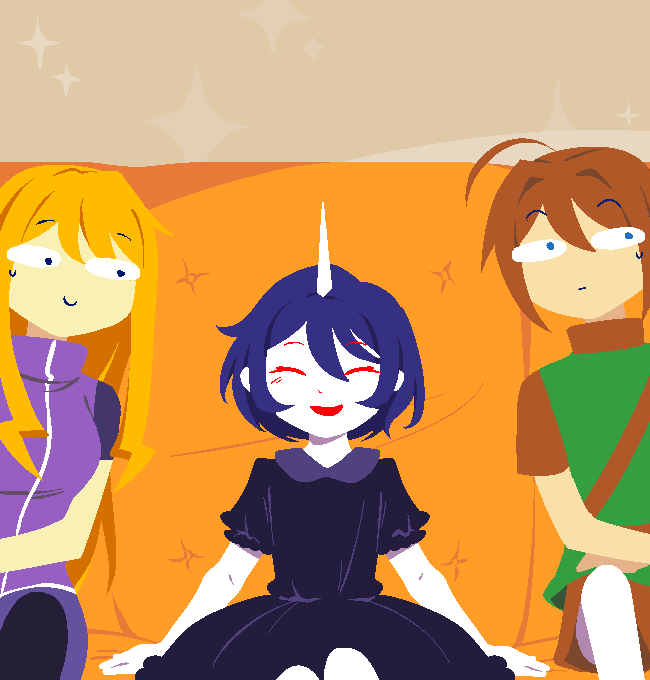 Well, this kid is very enthusiastic and all, but...
None of this really rings a bell.

Still, it sounds like this poor kid has suffered a lot.
Although you all want to know more, you're not too keen on making her recall painful times. There should be some better approach to getting information here...

Ludwig: Reminisce on the portrait of Ludwig capturing only a ghost of your goodness.

Ah yes. That there is a painting depicting Ludwig's kind.

However, that is not you in the painting.

If you must know how you can tell that this is not a painting of yourself, it is because the depiction is lacking. Indeed, it is no match for your ghastly yet dignified self, and your distinguished, wonderous gait, is not at all pictured.

Thus, this is merely just another one of your kind. A generic, nameless wolfhound.

Bah. You are not fond of this fellow. He is a shameful one.
You do not associate with your kind anymore, for they bring nothing but shame.

Like every wolfhound, you are quite loyal to your master. But unlike the rest, you do not attack anyone unprovoked.

Long ago, on a fiery battlefield, you witnessed how your kind terrorize helpless humans, all because of their masters' orders. And so, you deserted that field alone, despite all the scorn from your kin.

Ludwig: After all, the only master you'll accept is a fair one. 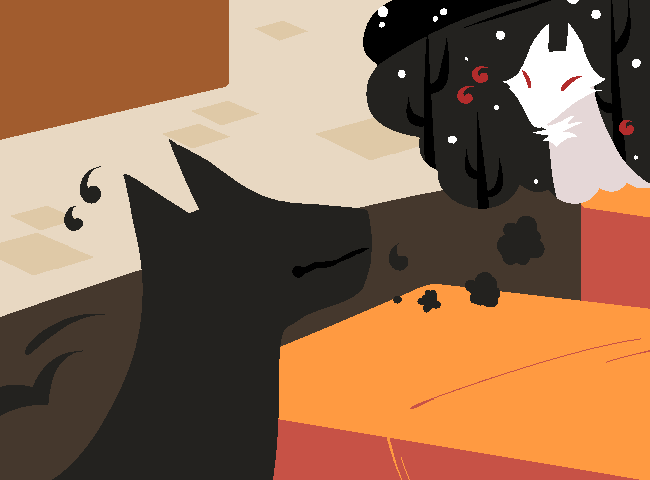 This portrait depicts only one shape of your kind, however.

Ludwig's kind come in many sizes and shapes, but only in two colors:

Having tried the cold weather here... it is unpleasant.
You find rimehounds even more difficult to understand after this experience.

Also, white is frankly such a dull color, you daresay.
It is nowhere as intimidating as your beautiful vantablack shadowy self, indeed.

Ludwig: Also shadily sneak and listen to the peoples. 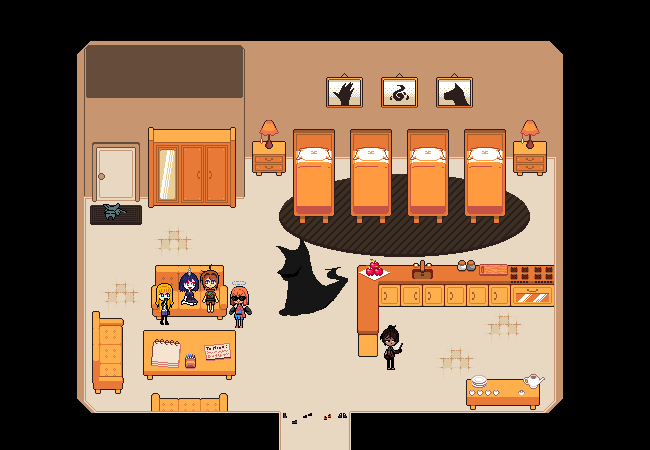 There are many a peoples here to listen to, friend.

But you see, master has taught you that loneliness is most unpleasant. Therefore, you will keep the lone one's company for the time being.

Master will surely be proud.
She has grown fond of this one, after all.

Reed: So, how's "Headquarters" over there? 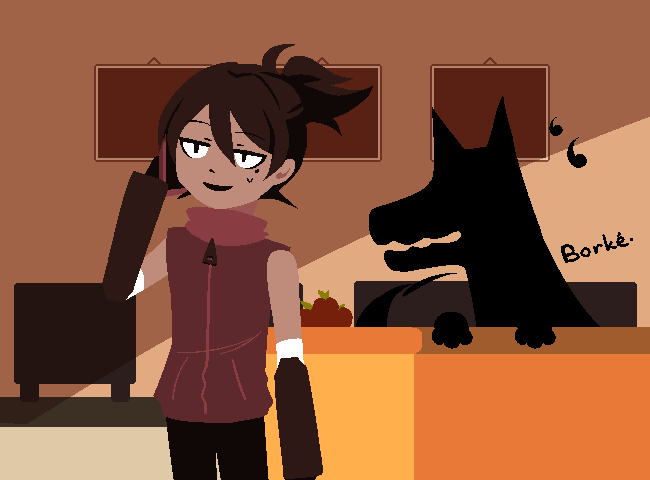 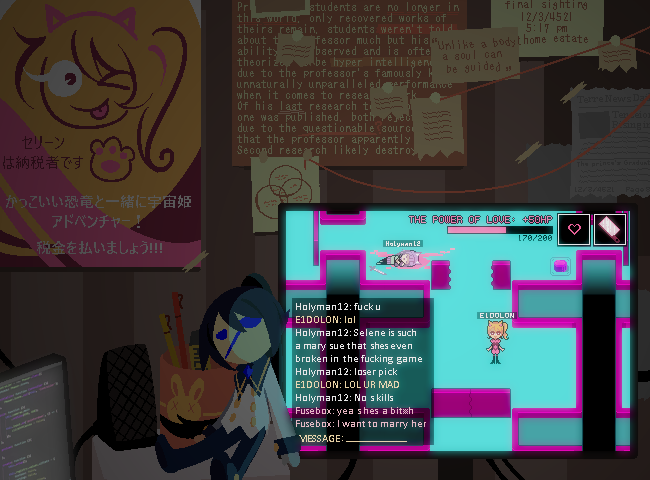 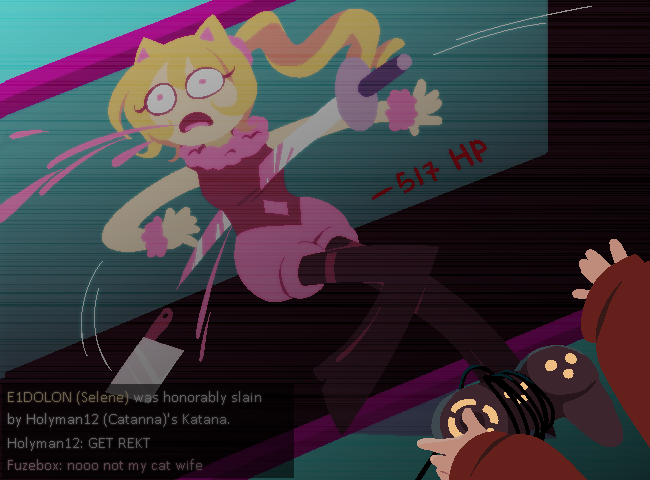 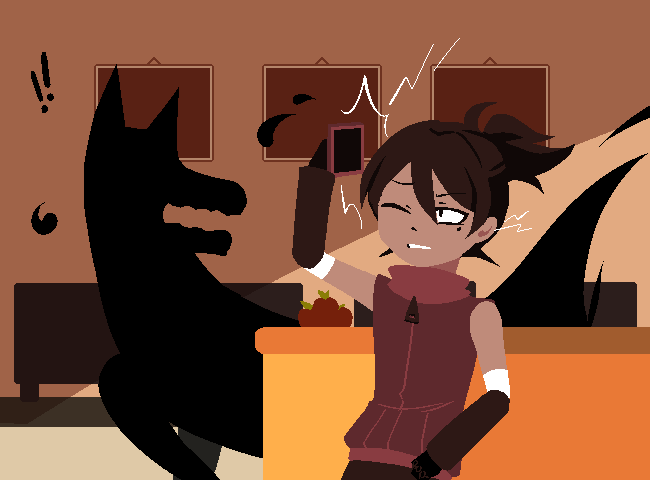 A piercing scream, so high-pitched it rings in your ears, even though it's coming off of speakers... and even though you really braced yourself for this kind of reaction.

God, the neighbors will complain again, won't they.

You're not upset at her, though. In fact, you feel kind of guilty here.
You're truly not upset with her, but this is all just a bit... worrisome.

She's the last person who can be left alone for this long.

You should've known better, and not have let it come down to this. This situation, in your book, is a colossal screw up.

Staying by the side of family should've been the priority, no matter what. 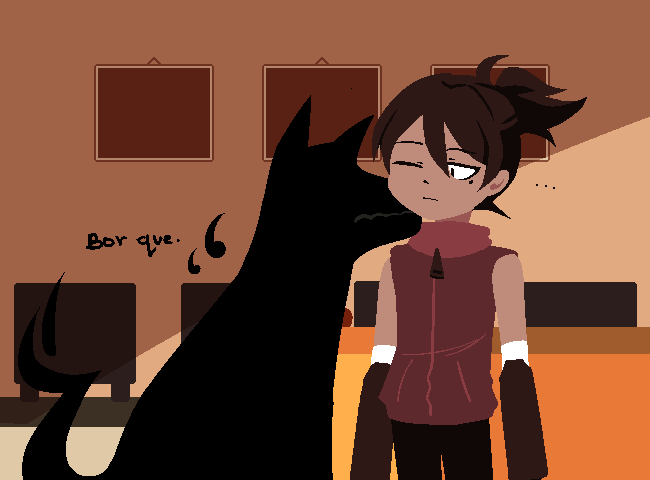 Regardless, you tried your best to calmly explain why you'll be gone for nearly two days in the face of her ongoing verbal tantrum.
And she begrudgingly accepted it, but under one condition.

Word for word, "buy me something good", she demanded.

Well, at least the spooky big dog is giving you a comforting nuzzle in these trying times. As if to say, it's not your fault.

It's not helping much, but it's better than nothing. 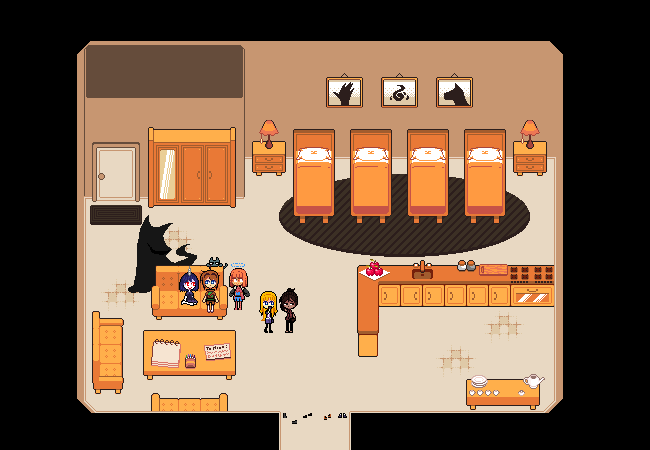 Oh, of course, there's no way Reed would make you such an offer without reason.

Still, you continue to wonder what sort of powerful person could push him to this extent. Your curiosity is overflowing, but also... your happiness!

You'll maybe finally get to own something from HUMANS, after all!

If there was a counter for Aria's happiness, it would be in the negatives - is how a certain wise yet immature person would've described it. 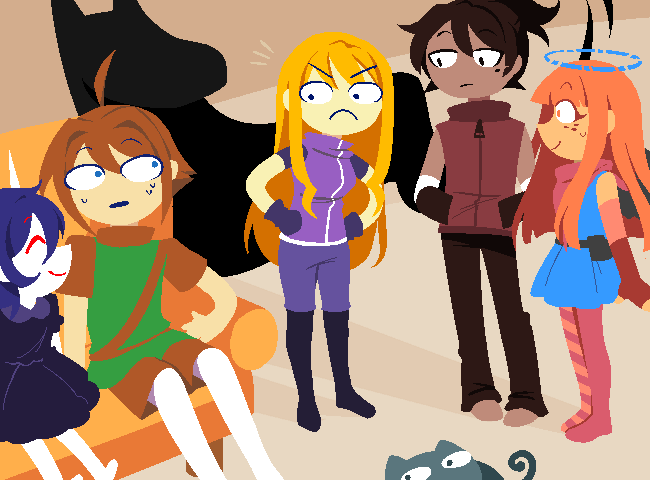 As you're about to point out how clearly illogical this child's request, is with respect to every fact that has been established up to this very moment, you suddenly feel a chilling presence, one burning with the might of a thousand suns.

Clearly, you've nearly broken the last straw for that furious, overprotective lioness behind you. You are but mere prey, and she must feed her young. You'd better carefully word your answer, or hell will be unleashed upon ye.

Also, because Five is really way too nice to you, and you don't want to make her sad by being too blunt again. Yeah.

so the team is literally an edgy teen boy bossed around by his NEET sister, who both happen to be kids of a deranged scientist, a girl who dresses like a cosplayer because she resorted to thievery and called her cat her boyfriend to not worry her mother, an archangel, after she left home a bit too early, an orphan young woman who’s the clingy and awkward daughter of a seer in a land that doesn’t accept her due to a past war, and pretended that she was one of them due to said seer living there, and adopted a poetic prose-speaking dog for companionship, and an 18-year old amnesiac who can’t remember his identity or past life(s), but can still remember things important to his identity as a weeb and other forms of pop-culture, and also adopted a kid from said clingy-awkward girl’s homeland by saving the kid’s life.

Now that I read this, I realize just how good you are at making such unique characters. Every single one is identifiable based on appearance alone, and all have unique personalities to boot. You're amazing at character creation

I’ve just realized that the amnesiac weeb not only speaks, but thinks dramatically too.

Nino: Let her be hopeful, but still be realistic. Say you'll help her to the best of your ability, but you can only so that if you know where, and probably who, you're meant to go and find. Ask Five about her "home".

Five: Talk about Five's old home and friends in the lab. Does Five remember anything about where it is? Perhaps a drawing would help.

Reed: Since you're the only human with any real knowledge of the human world, does any of that ring a bell?

Everyone: Try to relax.

Meimona: Do you wanna go with those two? It could be entertaining.

Five: Start drawing with the crayons and invite Nino to join Five. Nino and Five drew in the monster world, so it could help Nino remember Five. Recreate Nino's bad drawings to help him.

Nino: Try to not be awkward with the little lady. Fail to do that.

Five: Maybe try drawing the fun swing set, or the flowers Nino gave you and ate?

Ludwig: Sneak around like a ghost boy, and phantom the strange small creature.
Boyfriend: Don’t be catty, say what you think of your name, and interact with the new people.

As someone whose acted like "Oh yeah I definitely want to be friends with you!" just because the other person clearly wants to be friends but I don't want to hurt their feelings (little young Taki not realizing that whenever the other person figures out the truth it'll probably hurt them more [with an increased amount depending on how long it takes]) like 2-3 times when I was rather young, just know fictional character who can't read this that I stand by your blunt honesty.
Obviously the situations different but still.

The panel with "E1dolon: GAME ON" has notes on a researcher with "unnatural unparalleled performance when it comes to resea" (probably research), who based on the fact that apparently two publications were rejected, one which had a "questionable source" might be referring to the same researcher talked about in a book in the library in Icicle Bay Getaway, which means that researcher might have some plot significance. I was about to go looking for the page where Aria gets (what I think) is a butcher's knife, since I was wondering about the significance since it seems it was confirmed Selene used a butcher's knife. Then I found this page https://oceanfalls.net/p/1397 where it was already confirmed, and I probably just forgot or didn't notice. I have to wonder if Reed or Eidolon has some tie (I doubt it), whether metaphorical/thematic, or in some other way.
(Ran out of characters again)

Back to the panel, the "final sighting" is very ominous, is it related to the researcher (I forgot if the book in the library back at? It has the exact same date as the "Terre news daily"
Also, the "Unlike the body, the soul can be guided" using anything related to "guide" feels significant since part of Kaji's whole shtick was "guide", and winged purposes almost seem to be tied to concepts or perhaps in the case of guide https://oceanfalls.net/p/9152 seems to be tied to fate itself in some way.
Once again back to the panel, what is being compared in the Ven Diagram? It doesn't seem to to be tied via red string to anything with readable text. The only thing on the notes that seems to compare something is the soul and the body, but that Ven diagram is comparing 3 things. So even then there's still something unknown being compared.
What does the text on the Selene poster say in English, and what does the code in the bottom left corner do?

The code is likely fictional, but likely influences some of the technology in Oceanfalls and is likely experimental, due to the unstable nature of code having Reed’s sister need to use it carefully. It’s probably for his arm due to the OKS in the text, with nothing confirmed. The text roughly translates to “Selene is a taxpayer, Cool dinosaur and Space Princess Adventure: Let’s pay taxes!” Finally adding some moral ambiguity to the human side in Oceanfalls. Also, the one string likely means that the Venn Diagram was newly formed or is a distant part of the theories featured on the board. Mind, Body and Soul are a common trio in phrases, and could be the parts of the diagram, though there are no confirmations.

Also sorry for this being late, there is also the concept of logos, pathos, and ethos.

Now that the new update is up, I'm coming back to this comment to say: WOW!!!!! You mentioning the trio of Mind/Body/Soul just from a nondescript Venn Diagram is awesome.

Taki reminded me of it by mentioning "Unlike the body, the soul can be guided“.