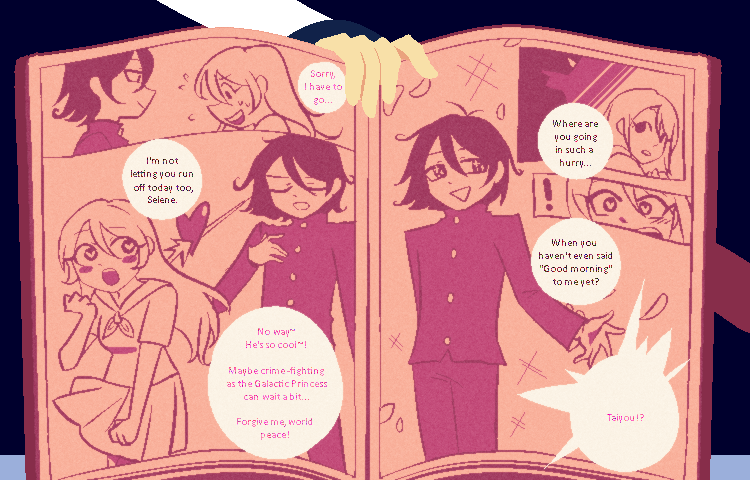 It is stupefying how expected this outcome was.

Lune: Attempt to tear your eyes away from this gaudy page. 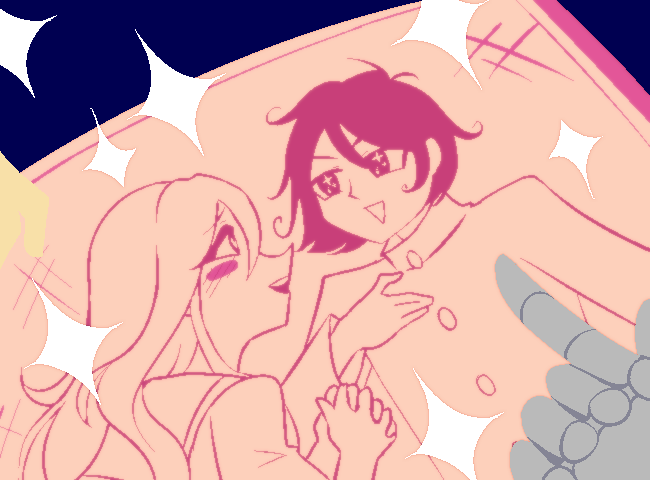 You're trying, you're trying so hard...
...But his highness sure is making this difficult!
It's so unbelievably garish that you can't even look away! 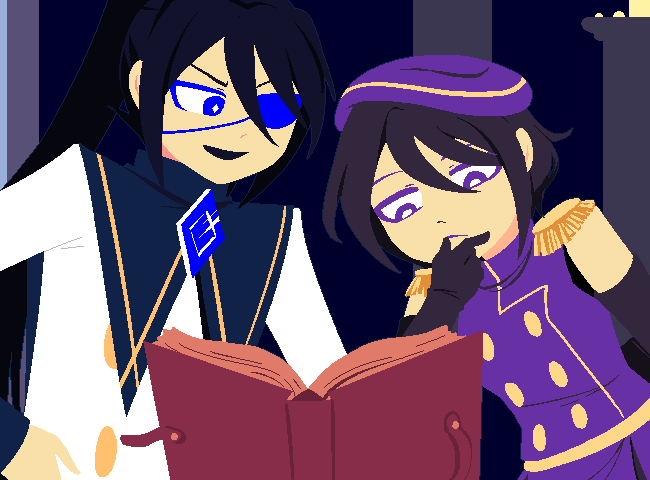 Oh, dear, that's always what this boils down to.
Yet again, the prince is trying to live up to some odd expectations.

His highness is most anxious regarding how the public sees him, after all.
Sure enough, this sort of silly situation stemming from his worries has become normal to witness in private. As amusing as it can be, it is also quite worrisome.

Well... it's not like there isn't any truth to his concerns here. 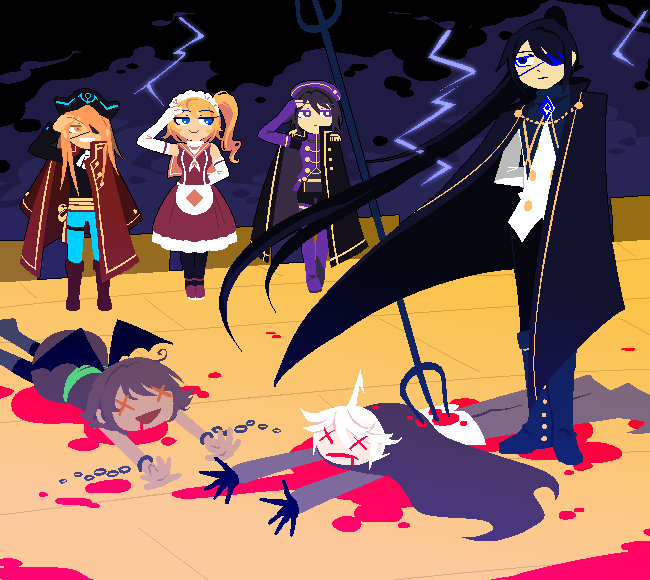 The public image of his highness is, in two words:

A strict figure that everyone fears, harsh yet noble, they say that he is a prince befitting of inheriting the human world. He is a successor just as ruthless as his predecessor, such behavior is weaved into his blood. Every monster surely shudders at the mention of his name, while humans cheer for his continued service to mankind.

Lawbreakers and misbehaving servants alike are said to grovel before his throne for forgiveness, at every minute of every hour.

Lune: Compare and contrast with... reality.

Indeed, what a fascinating and powerful personality that is.

Yet, his highness is as far as can be from whoever that imaginary person is.
Truthfully, you feel that he has never treated you the way a servant should be treated, to a rather concerning degree at times.

You'd never mind an order of his, but he only issues requests to you.

It's not that the basic facts involved here are inaccurate. The "problem", as you believe it to be, is that they've been exaggerated to an impressively extreme degree.

That was all done deliberately so, thanks to a certain royal advisor. 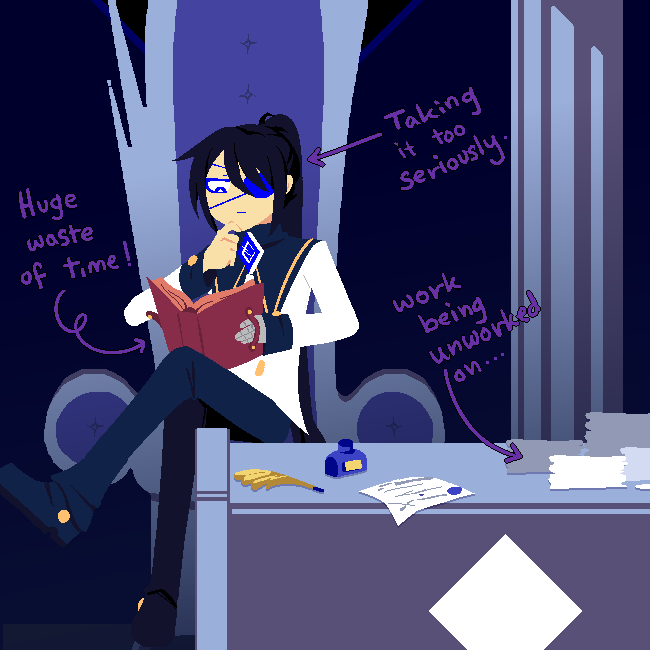 This prince, the allegedly strict and punishing figure, oversleeps often.
He reads this thing called "manga", rather than high-class literature. He has a sweet tooth fit for a toddler's, and never the appetite for the exquisite food of royals. He hates ordering his servants around for anything.

Sometimes, he requests that you order them in his stead.

Regardless, years ago, as a new ruler replacing the public's beloved late princess, the prince saw it crucial to reassure her people that they would be in safe hands.

Shortly after he inherited the throne, Selene was appointed as a royal advisor to maintain nearly every public appearance of his. As a genius on gaining any crowd's approval, Selene easily masterminded his highness' 100%-approved public image.

Rumors quickly rose regarding the prince's idealized characteristics, and the public took care of exaggerating countless claims of his capabilities and accomplishments all on their own - no doubt playing directly into the royal advisor's plans.

Nowadays, wild rumors about the prince are accepted as fact by the average citizen.

Lune: For instance... One will often hear such whispers among crowds at royal events.

"I heard that the prince wiped out an
entire regiment of monsters by himself".

"Our prince could've killed their prince,
if not for his dirty underhanded tactics".

"The only living human who rivals the
legendary Lady Oshen is our prince".

Such wild claims, they are.
This glorification of bloodshed in war is almost offensive.

Plus, you know best that comparing anyone to Lady Oshen of all people is a ginormous expectation to place on their shoulders.

You'd gladly attest to the degrees of truthfulness and falseness in every part in these rumors if you could, but you're not the royal advisor here for a reason.

For this exaggeration is a positive and intended outcome according to Selene.

Regardless, his highness has been doing his best to live up to the public's idea of a dependable ruler's personality, in his own way. Which is currently supposed to be accomplished by becoming a cool person...!

What does that entail, you ask? To nobody's surprise, it happens to be something that involves Selene yet again. This time through her... comic-book literature.
Sometimes, the act is amusing to watch, so you let it slide, and even humor it a bit.

Unless it's interfering with work, that is.

[I] Lune: Be honest... but not too blunt.
Subscribe
Login
7 Comments
Oldest
Newest Most Voted
Inline Feedbacks
View all comments

"Forgive me, world peace!" Is just a fantastically cheesy line.

Fantastically cheesy is the BRAND of Selene... I can't believe she's secretly the star of this intermission u_u

>Lune: School this fool on the REAL nature of coolness.

Guess it's a good thing I decided to check out this comic right after the five month gap, as opposed to right before it.

Welcome on board. 🙏
I believe right now is the best time to catch up or start reading too, since I've just gotten out of long hiatuses and into this fun-but-time-consuming weekly update schedule business.
Hope the comic makes (made?) for an enjoyable reed to you!

I really didn't expect The newly enthroned prince of humankind to be a teenager on a c00l d00d phase... but maybe I should've seen this coming from a newly enthroned (teenage?)prince. As always, thank you so much for your work. Issa delight to read