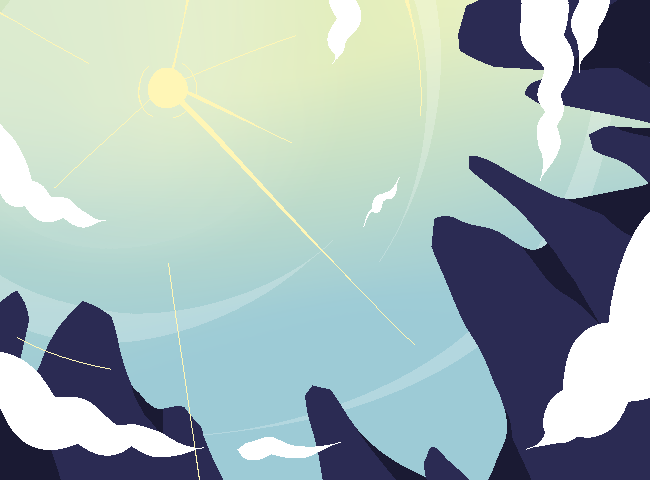 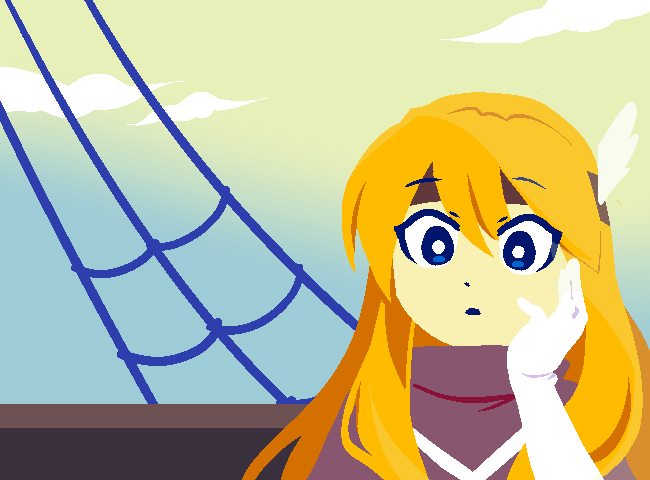 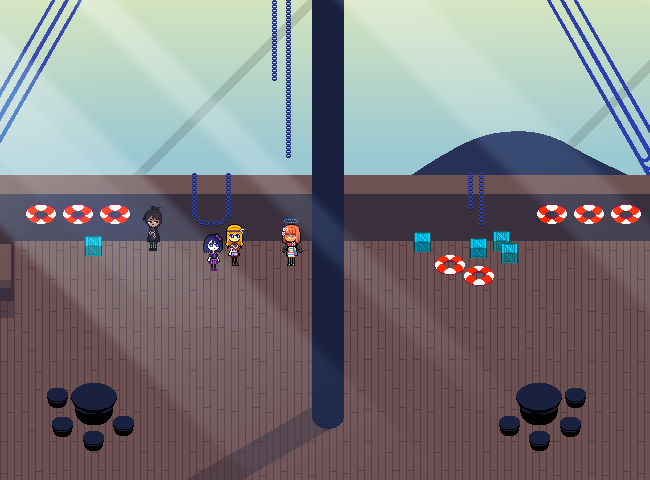 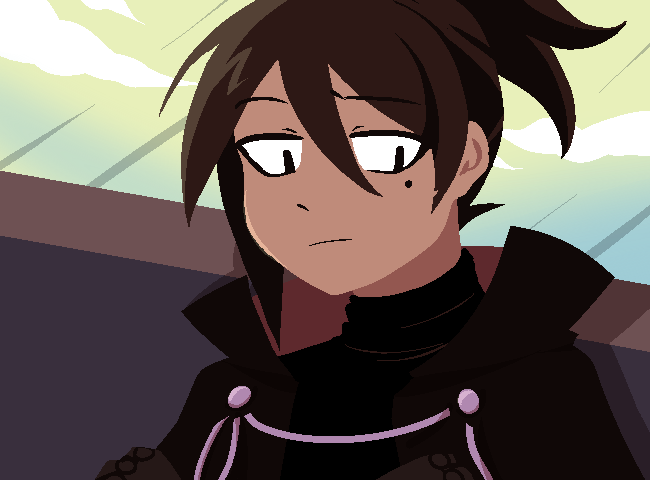 Reed: Message your si- er!- headquarters about coming back sooner than expected. 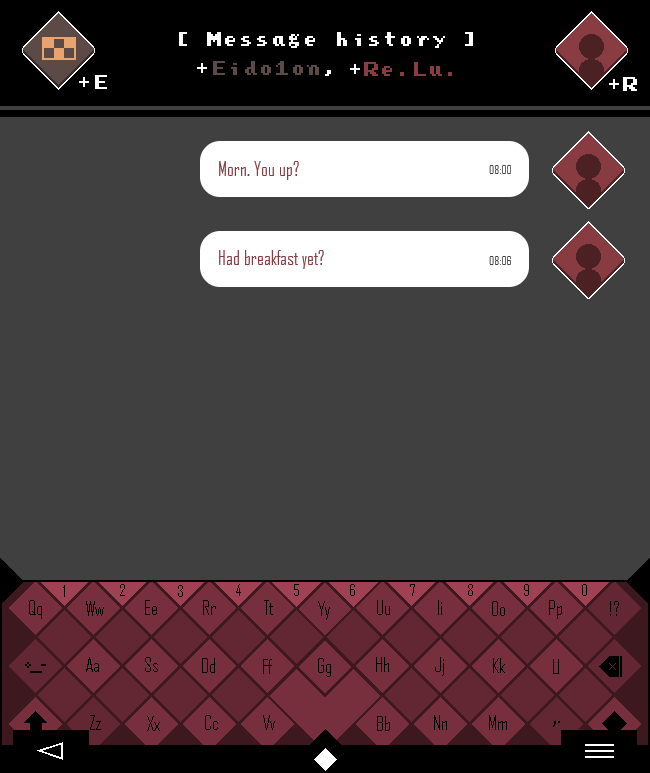 You figure there'll be no better time than now for a status update, but your messages receive no response. Headquarters is offline.

A rare sight. Otherwise, she'd give an immediate reply...

Followed by twenty more rapid replies in her signature Eidolon-style. 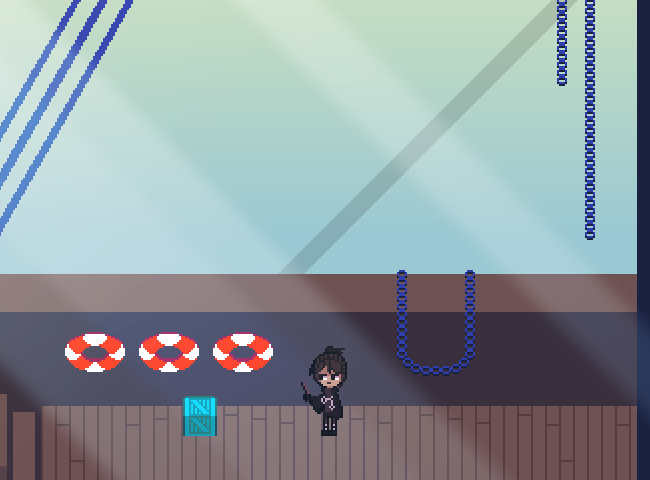 Well, it's no wonder she'd be offline.

It is pretty early in the morning right now, and you'd bet your bottom buck she stayed up late playing her videogames. After all, you weren't around to enforce a proper bedtime! At this rate, your arrival will probably be a surprise.

Hopefully, you can introduce her to this ragtag team without issue...

That can wait, though.

You'll deal with it when the time comes. For now, what's more important is to make sure that everyone can reach the destination safe and sound. 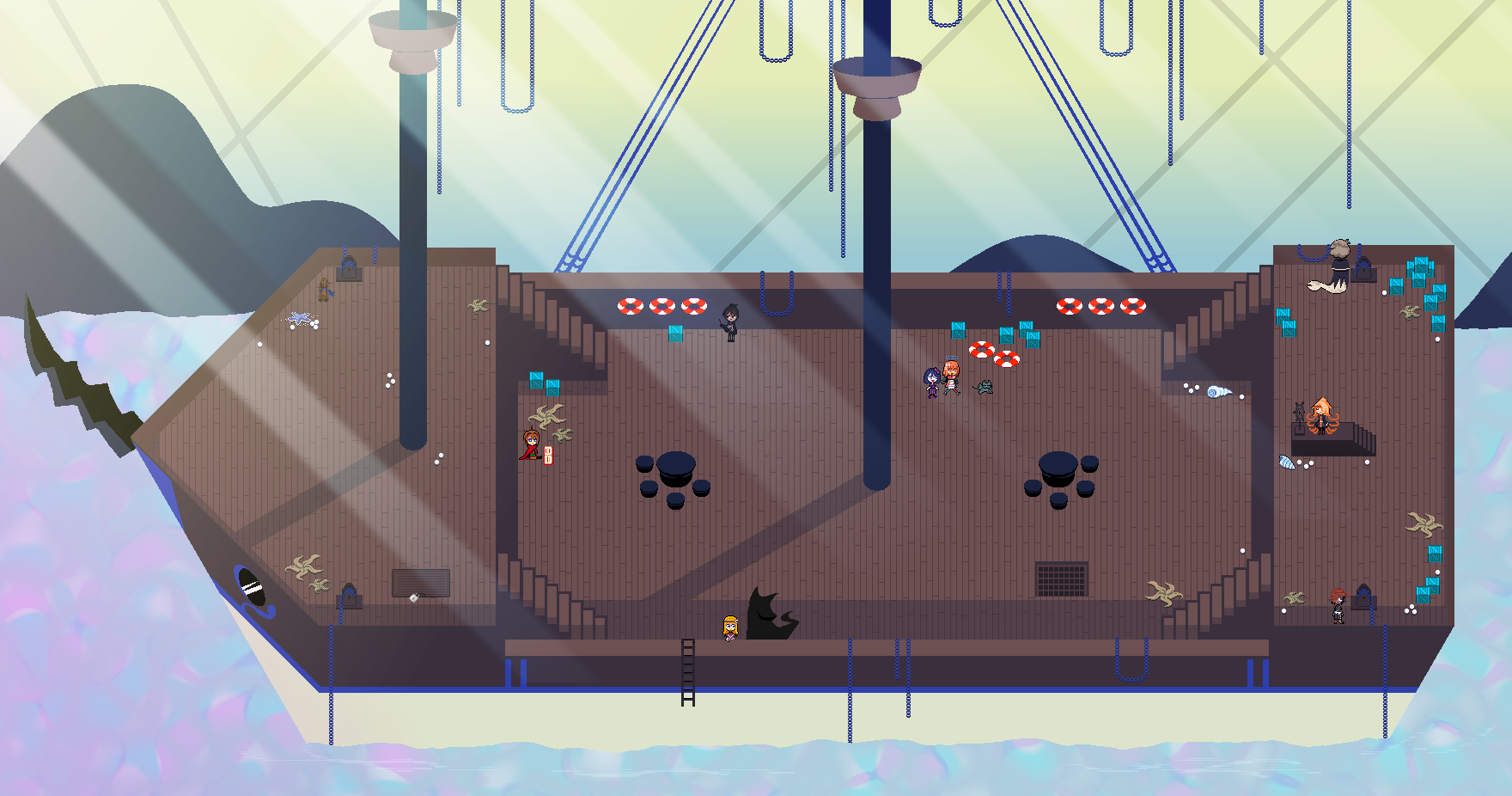 Looks like everyone else has already scattered about the ship, each person finding something to pass their time with.

Honestly, nothing here has caught your interest. It's the same ship you've been on before, the same people you've spent time with, and the same sights you've seen before. Nothing new whatsoever. What a massive, massive bore.

Nino: Take a peek in the Book of Wonders. It could come in handy. 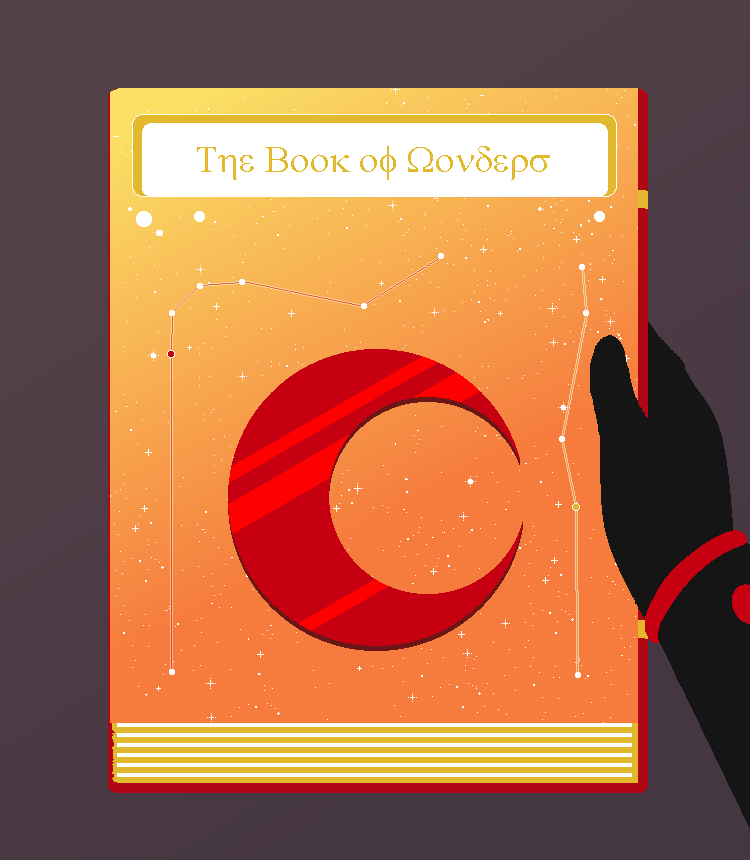 Let's see what this special thing's deal is.

First off, you check the front of the book. It is rife with the imagery of stars - some forming two distinct constellations in particular - surrounding a red crescent.

You don't really recognize what the constellations are, though...

Nino: Turn the Book of Wonders over. 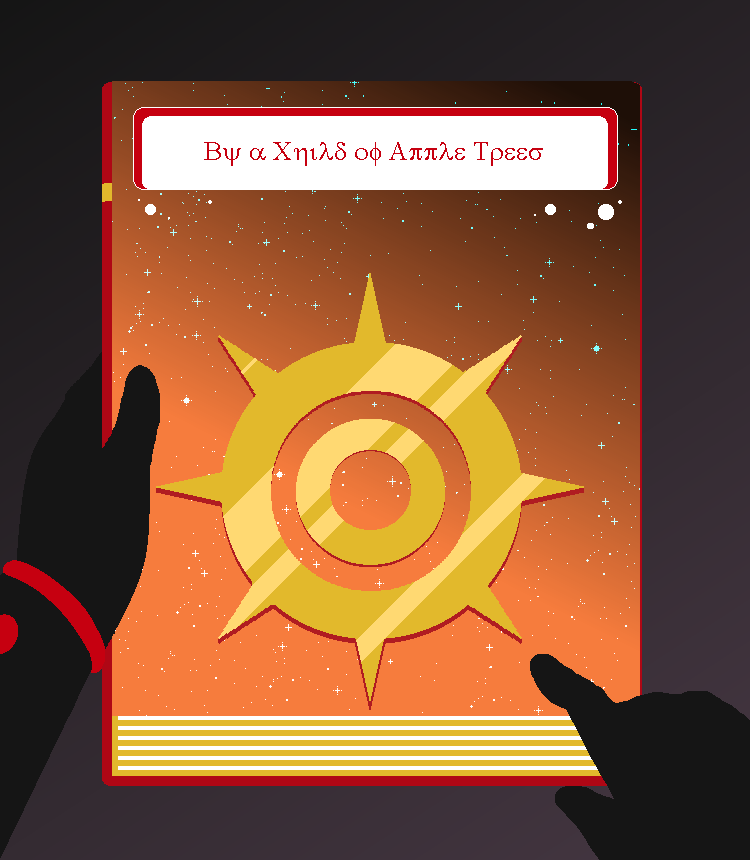 The theme of astronomical objects continues.

Namely, what seems like a large golden sun is presented front and center, with a backdrop of little stars strewn about in no recognizable pattern.

It looks like everything bound within these covers is attributed to a single author, both text and visual flourishes. It was all written and constructed by hand! It is crafted from rich materials and is remarkably well-preserved, to boot.

Everything about this book seems to say that it really is one-of-a-kind.

Picking it was definitely the right move.

Aria: Maybe check in on Nino? 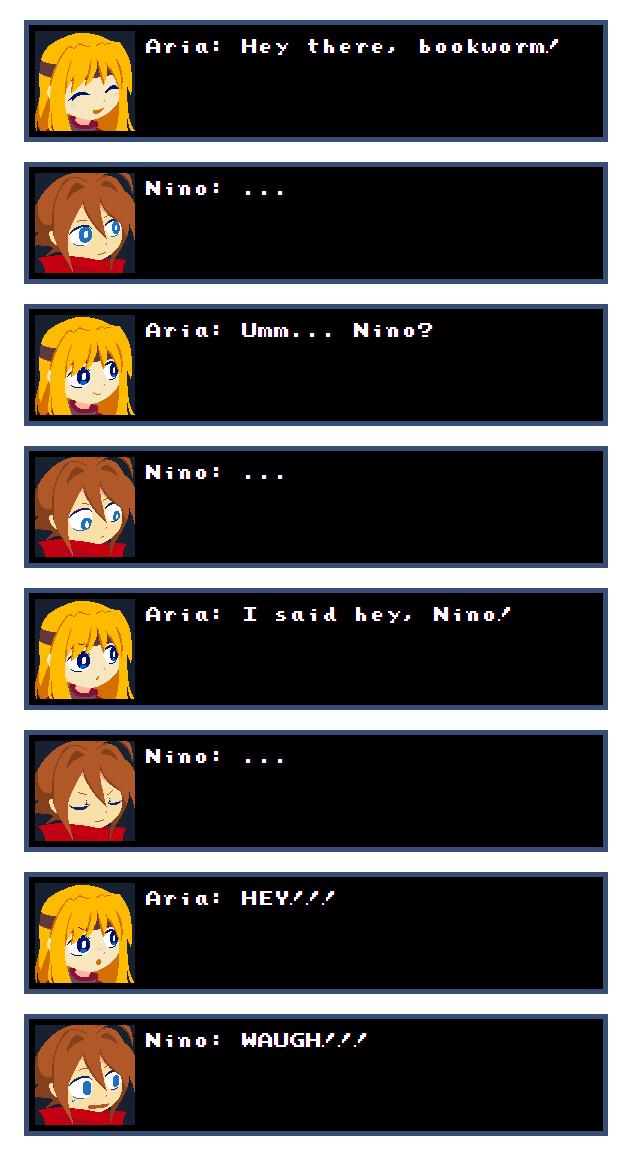 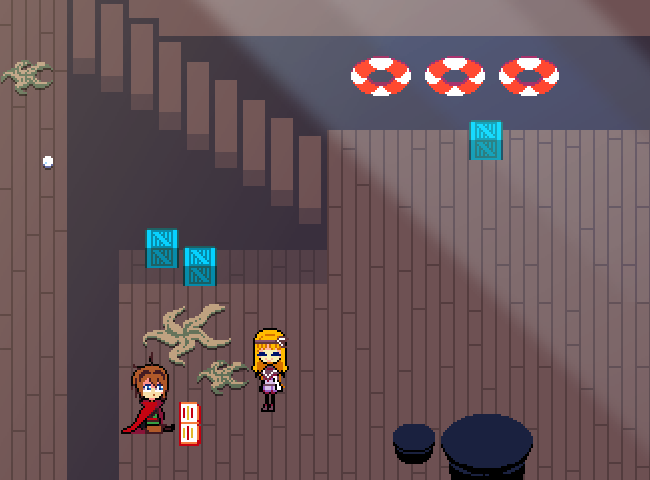 If someone asked what you thought of Aria yesterday, you'd probably say she's very predictable. But ever since your talk in the hotel, you realize that she's kind of...

After all, why would she give you a modicum of kindness at this point? 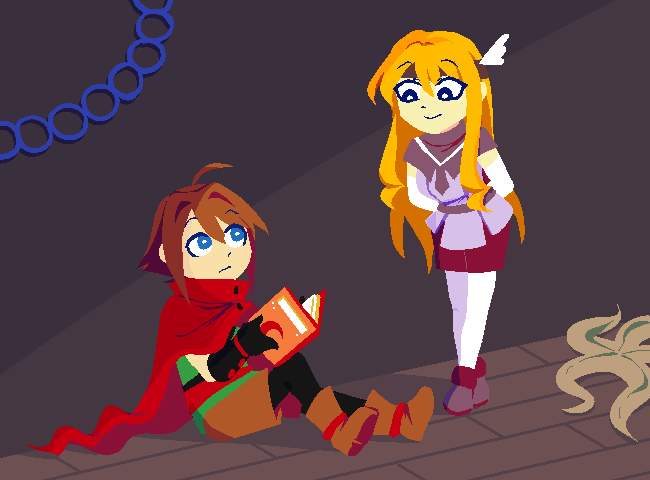 If she chose to keep her distance after that talk, that would've been understandable. Yet, she approaches you and initiates friendly conversation...

For seemingly no gain at all!

Is she planning something? But that seems unlikely, so if not, then... is it just that you have held the wrong expectations in regards to her actions?

Man. What a headache.
Why does everything have to be a mindgame to you?

Maybe she just wants to read an interesting book, which just so happens to be in your possession right now. Nothing more, nothing less, and that's why you'll treat it with as little exaggeration as you've ought to.

Nino and Aria: Read together. 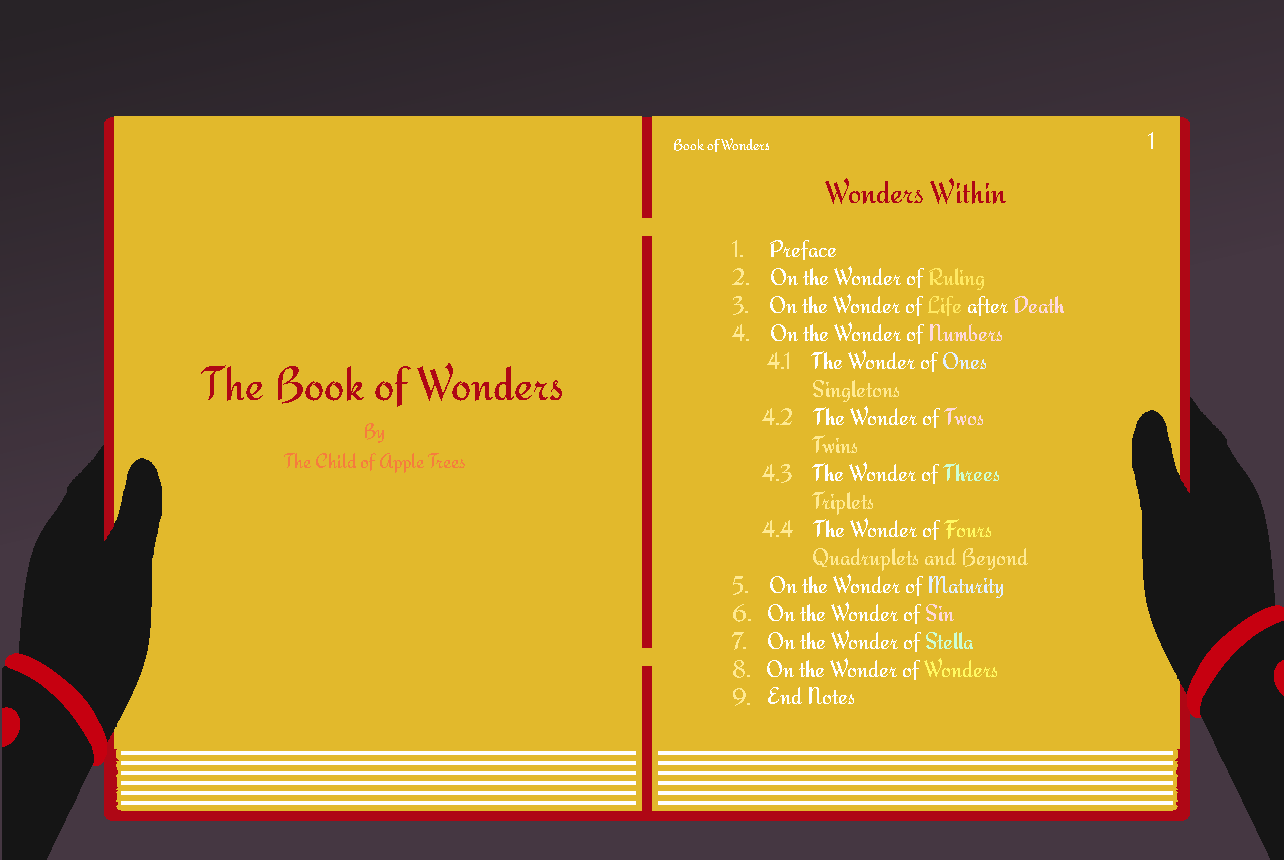 Nino: Check the preface with Aria. 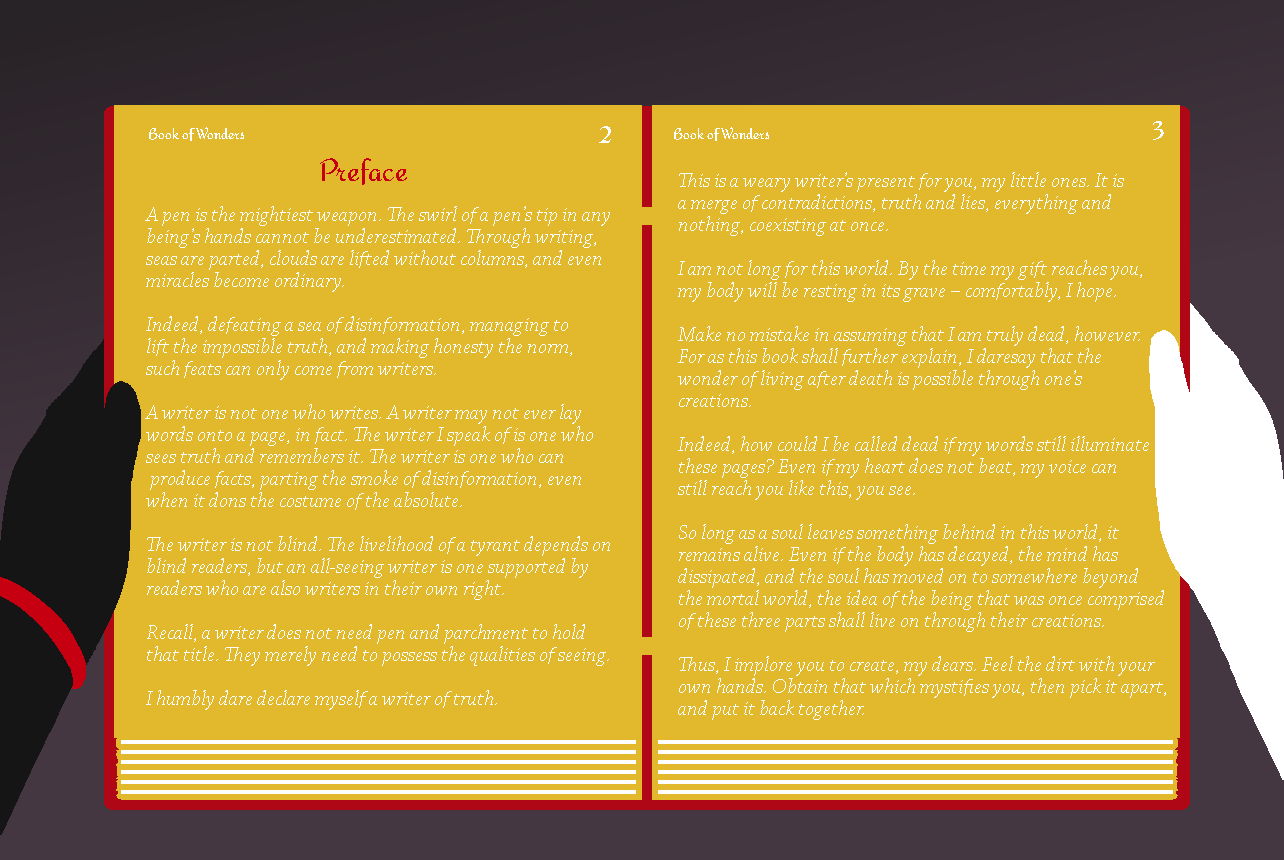 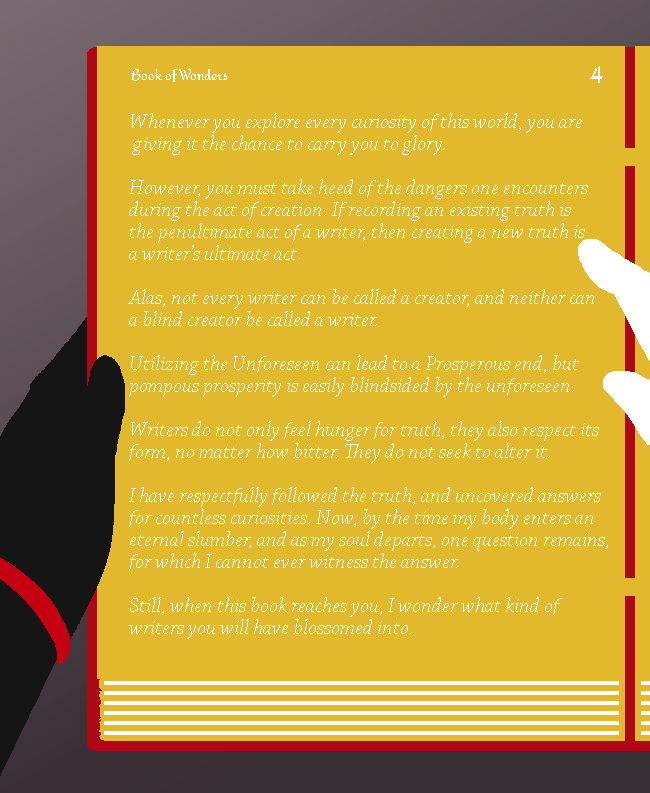 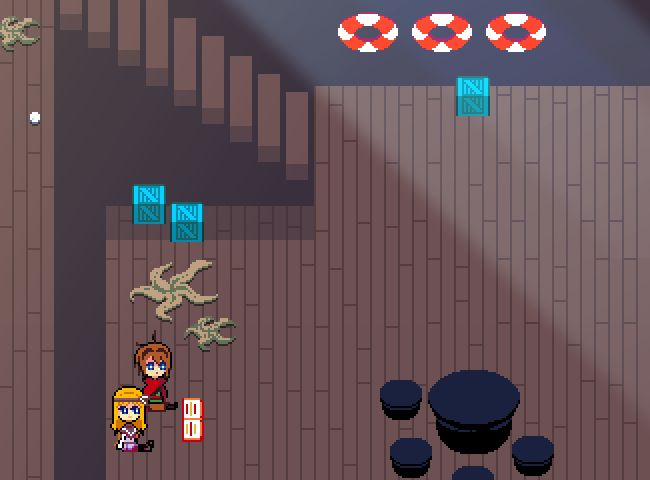 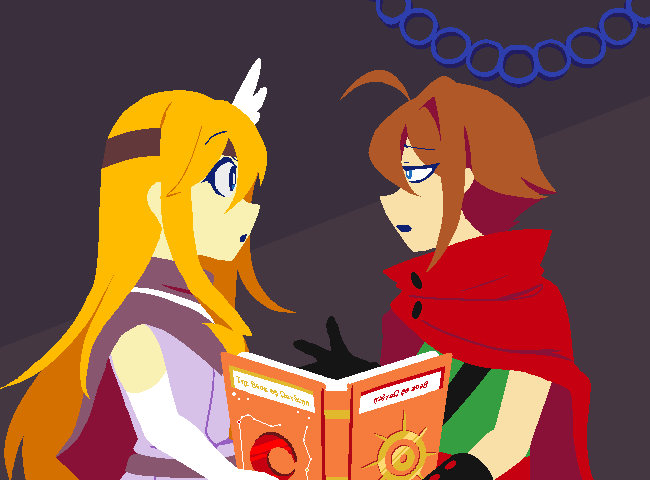 i wrote a book for reading inside of a readable comic

so you can read your book while you read your comic

I love reading about readers reading a writer's writings about writing.

But seriously I like the preface a lot. It's both mysterious and inspiring.

Can I say I'm a big fan of this book's author too? I don't know how highly dangerous the levels of things within things we'd approach if I make that statement...

Yo dawg, I herd U like reading, so I wrote a book for reading inside of a readable comic
so you can read your book while you read your comic

My friends, I am to inform you there is another Easter Egg on the bottom of the page.

When the time comes to read a comic within a book being read in the comic, will you read it too?

absolutely, although wouldn't it be awesome to read a book in that comic within a book being read in the comic?

Nino: Agree, but remember, you must not vandalize the book.

Mei: Bring Five and check out what those two NERDS are lookin' at. Maybe crack a friendly joke at their expense.

Reed: Has "headquarters" responded yet? If not, then surely there's something else to do. Or just enjoy the sea breeze.

Nino: Ask if you could borrow some extra paper. You do have writing utensils, but still need something to write on for a "journal" for yourself.

Text on other side of book translates to “By a Child of Apple Trees”.

On the right is Sceptrum!

Ah, thank you for the clarification.

If the rest of the book is this abstract, figuring out who the author is is probably going to be necessary to get any meaning out of it.

A diamond can be a rectangle and a rectangle can be a diamond, but neither have to be the other.
There, fixed your simile, Nino.

Guest
7arty
Reply to  The One Guy

I think I can do you one better:
Going by Aria's comment that squares are diamonds (and vice-versa) then we've got this:

Only issue with this analogy is squares/diamonds are a fairly unique, rigid and special case, and I've no idea if this matches the Writer/Creator overlap or if it is more flexible in variety and form.

(...also, wait, is "rhombuses" the correct plural for rhombus?)

Guest
The One Guy
Reply to  7arty

I don't understand what you're trying to say.

In your statement, I don't even know what point what you're trying to make; if writers are squares and creators are diamonds, then what do rectangles and rhombuses represent? Also, If I'm correct in saying squares represent writers and diamonds represent creators, then you're making the same mistake Nino did, implying that all writers are creators when the intent was not to. Also notable, if not as relevant, is that, in the context of geometrical shapes diamonds and rhombuses are the same thing.

Guest
7arty
Reply to  The One Guy

No no, the analogy I was aiming for had writers as rectangles and creators as rhombuses, where squares and diamonds would be the special case where writers and creators do overlap (since the way I understood geometry, rectangles = all angles 90°, rhombus = all sides same length, and diamonds = a square rotated 45°).

Guest
The One Guy
Reply to  7arty

Ah, so we were just talking over each other due to using different definitions of diamond. That said, look it up, in geometry, diamond is just another name for rhombus, and rotating a square doesn't change what it's called.

nights i love your webcomic i'm sorry for being unfunny

"Rhombuses" and "Rhombi" are indeed the correct plural form of arombus

Nino: Be careful to not fall into the trap of overthinking and find meaning where there is none and vice versa.

Nino/Aria: Read what you can and note it for later.

Mei: Play with Five and coast on your luck.

Reed: Note the potential of what you should do and get a read on how Nino seems to be different from yesterday.

Woah, cool! Please share it with us! I love to see fanart.

should i send it in the comments or upload it to the fanart site?

Good fanart, especially liked the detail on the coat/hair.

Just wait, turns out Nino got a children's book for his troubles.