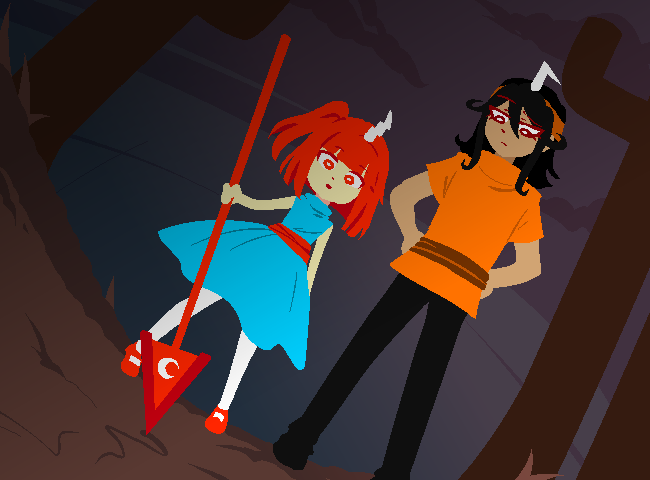 Kotori's idea is to stand guard in two key locations.
Here in Red Tulip, and back in your village, Buried Oasis.

She cutely draws a diagram to illustrate for you, using one of her countless spears. Not that you really needed one, as knowledgeable as you are of your world's terrain, but you let her continue because it's cute. Anyway.

Somehow, she believes these to be the two most likely spots for an assassin to infiltrate through, but when you ask her why, she offers no reasoning behind it.

Yet, the more you think about these locations, the more reasons you find for them to be a good choice, based on your own knowledge.

Kotori & Solis: Make & discuss how to execute the one plan you can have. 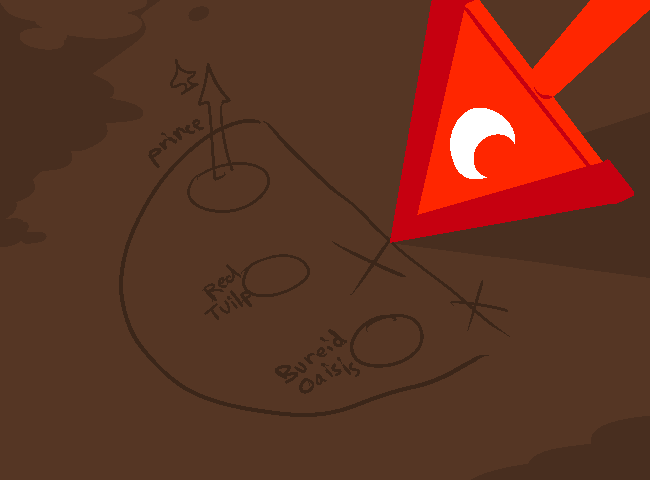 Red Tulip Town lies in a forested region named Akkarmara.
This is the area with the least population in your world, due to the illusory nature of Akkarmaran forests. Besides a few small settlements, Akkarmara seldom sees activity.

Well, does the lack of supervision not make it the perfect hiding place?

Buried Oasis lies in a vast desert named Niyran.
It's large area that houses significant historical sites, and it lies the furthest from the Royal Marshes. Although it is far from the direct oversight of the prince's forces, it does have its own guards in place, and is not unwatched by any means.

However, Niyran holds numerous secret underground passageways and tunnels to be used for fast travel. These lead all the way to various key locations within your world, even directly to the settlements by the Prince's tower in the marshes.

Why, does that not make it the perfect hub to stealthily traverse this world, perhaps even towards the target of this assassin?

Indeed, these are the most strategic locations for your foe.

And yet again, this kind of knowledge isn't exactly commonplace. Not even Kotori, a fellow monster, could give you these facts. Not only is the method for accessing Niyran's tunnels a secret, but their mere existence is a well-guarded secret.

Solis: How does she even know... or feel any of this? 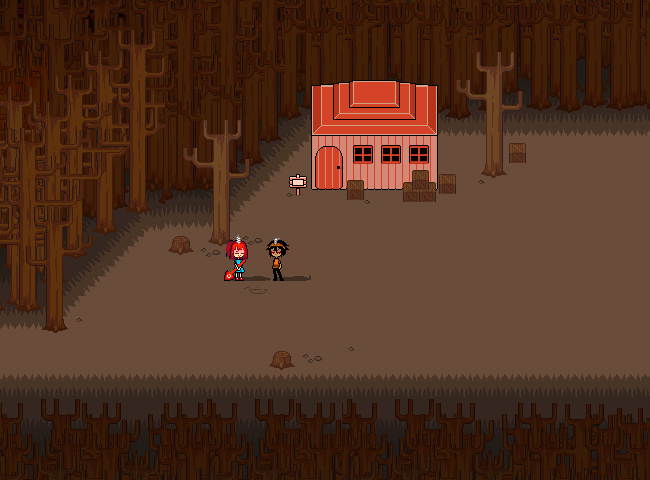 Ah, jeez... you wish she wouldn't say that so bluntly.

It's looking like you won't get a concrete answer about this hunch here, but continuing to question it will likely only bother her more.

You have a feeling she's keeping a lot from you. Perhaps once the celebrations pass safely, she'd be more keen to share. But right now, further probing seems meaningless, and you don't exactly want to force things out of her... in the first place, it took a lot to make her comfortable enough to cooperate this much.

Right, to Kotori, addressing the contents of this hunch must be a more pressing matter than trying to pin down where exactly it had come from.

Naturally, since she currently believes that the most precious life in this world is at stake under a very short time limit, she's considering discussing any other matters to be a waste of time.

A human assassin, huh. That does ring a bell.

Solis: Theorize the source of the killer. 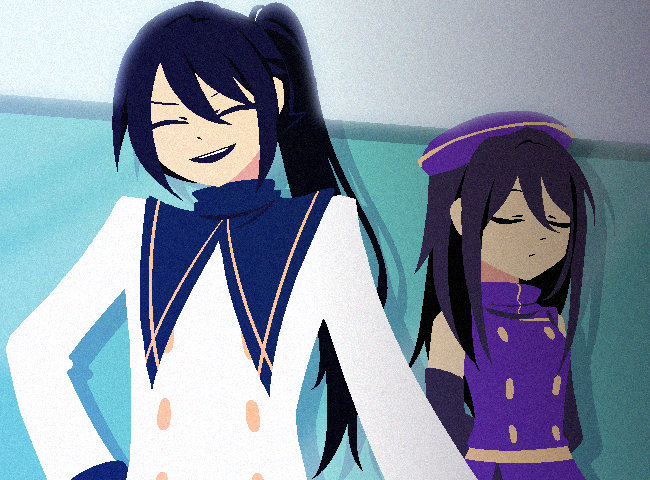 ...But there's no way the person you're thinking of could be involved.

Lune Umbra, the commander of humankind's army, and a former Umbran assassin.
Who, prior to becoming a guard, had once tried to take the life of the very prince she currently serves.

She may have been raised as an assassin in her youth, but she's become nothing more than a highly-favored guard by the prince. Indeed, knowing how dearly Prince Ruit regards Lune, her involvement is pretty unlikely.

In your time spent at the human world, rarely did you ever see them apart.
For he clings onto her like ivy, and she follows his strides as closely as his shadow, or perhaps even closer.

Never in a hundred years would he wager her life in such a risky manner. 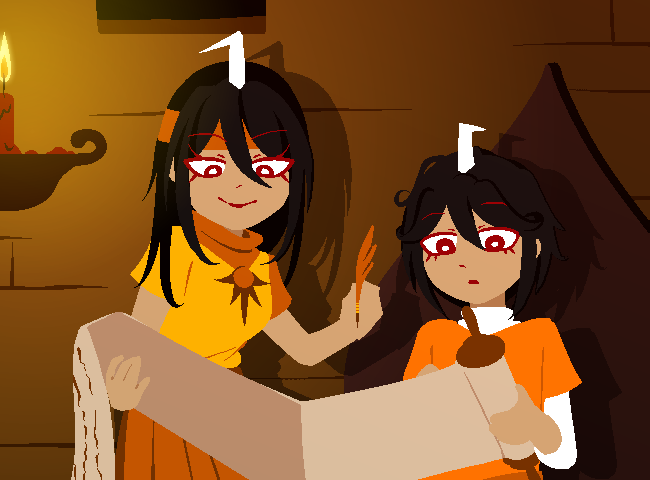 In the first place, Prince Ruit and his army completely lack the critical information required to plan something like this.

Picking the suggested locations requires a host of knowledge about the terrain and structure of your world, knowledge that even monsters lack. Especially regarding Niyran's passageways, which are reserved only for their Regional Lord - and you, as the next in line for the position.

It's illogical that a human could be aware of any of this.

That's why, you can't bring yourself to fully believe this assassin story... but you've chosen to believe Kotori. So in spite of its unlikeliness, you must show your choice by actions, or you might ruin your one chance to fully mend this friendship.

And, if you happen to actually accomplish something here...

Then isn't it your chance to recover that valuable princely trust, as well? 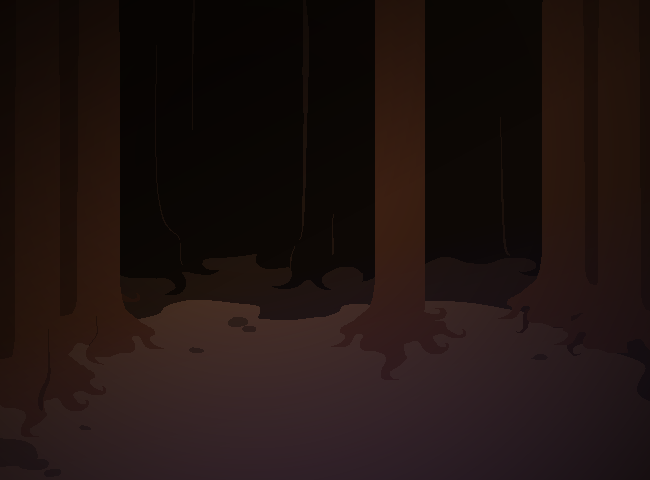 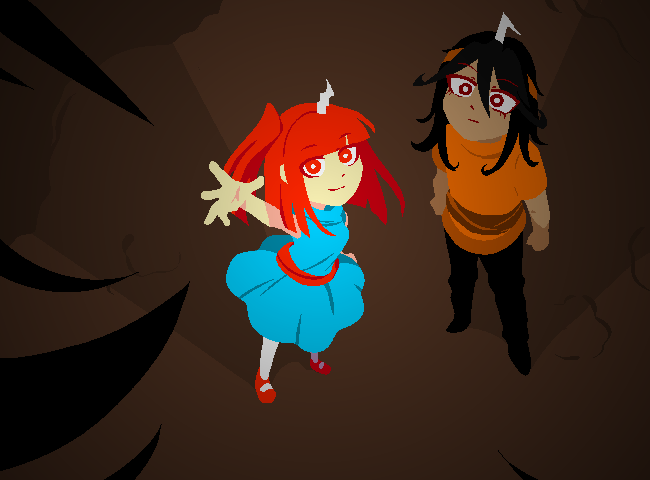 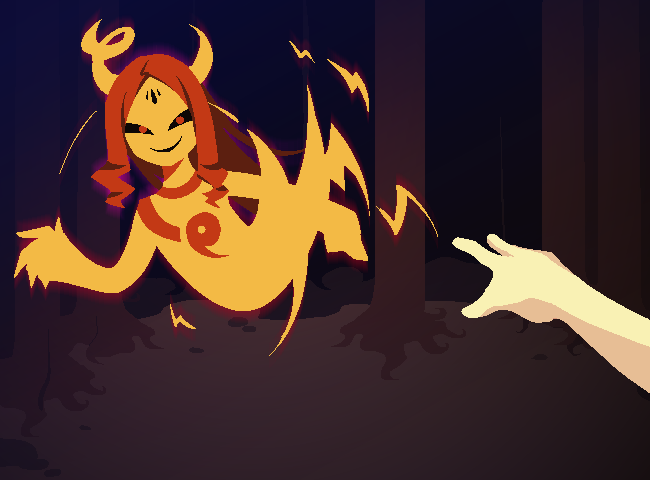 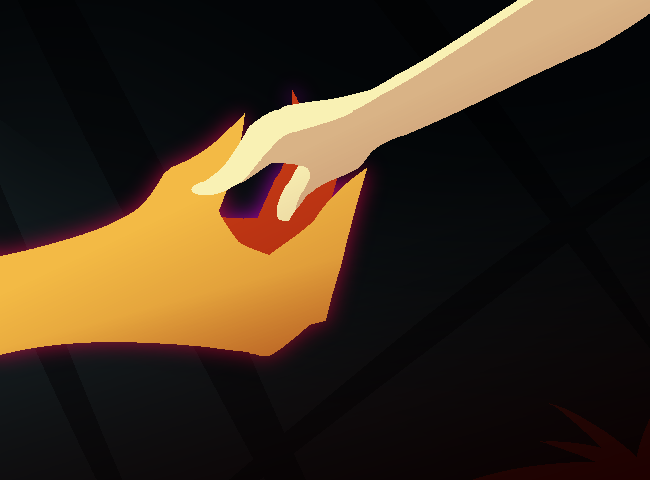 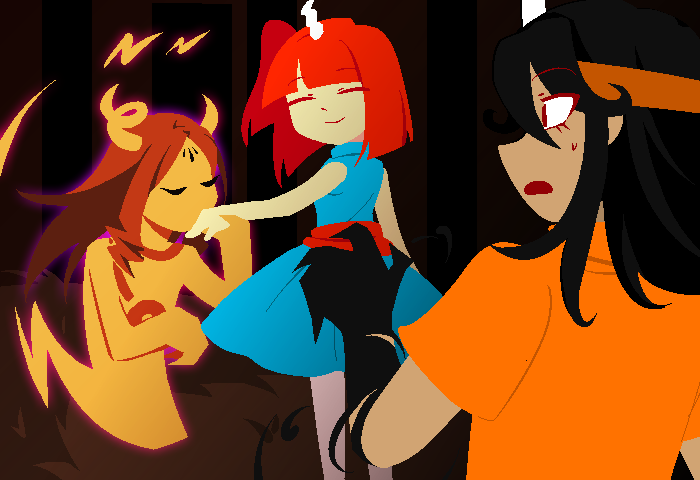 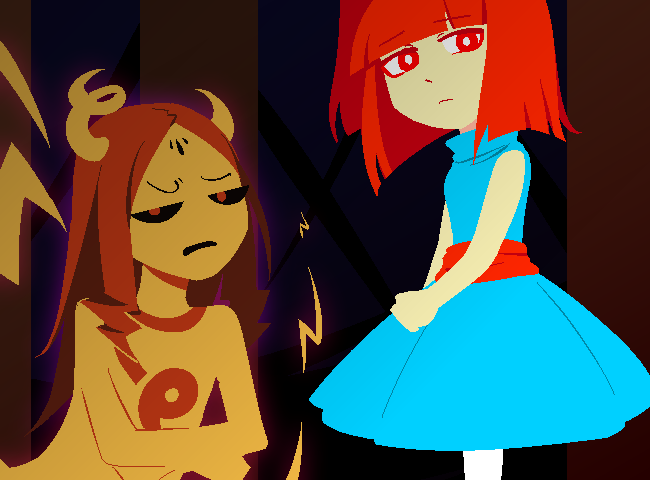 Oh. Fuck. Whoops.
You weren't supposed to ever mention that so casually.
Crap!

Solis: You fool. You absolute dumbass. 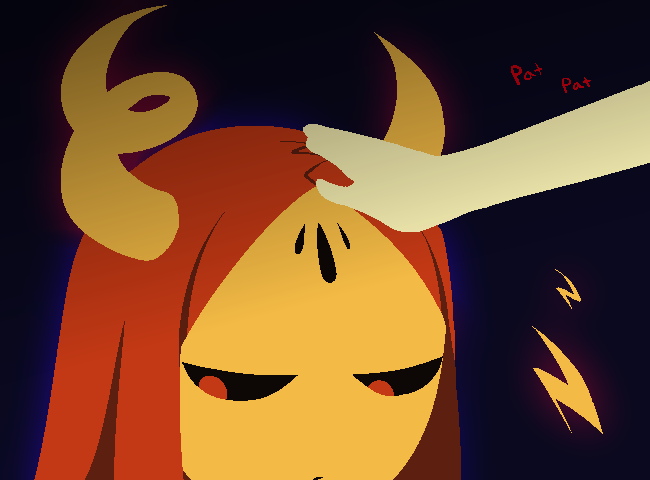 Words fail to express just how strange what you're witnessing is.

You never knew that Kotori was this much of, uh, a pacifist, if that's the correct word here. Still, it really looks like this spirit is on her side, even seemingly shunning you for questioning Kotori about its loyalty.

It's not like forming some kind of peace with spirits had never been under consideration before, but it was simply ruled out as too dangerous to try, a waste of time and effort, and frankly... even if it succeeded, it'd have been far less beneficial than utilizing their fury in war against humans.

Regardless of how cruel it seems, your words have no sway on that decision. 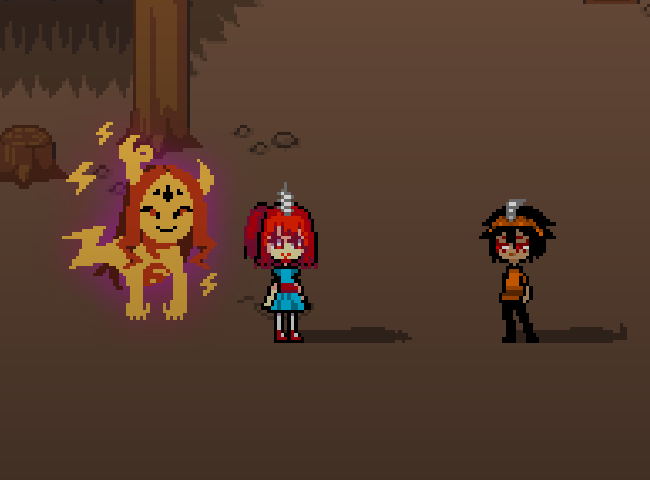 Solis: Maybe she's not as incapable as you thought. 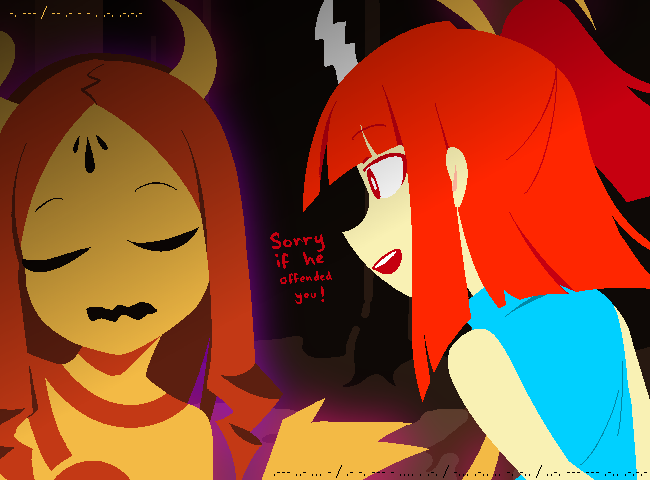 Well, as long as she remains in safe hands, right...?

Albeit they may be ghostly, illusory, spooky hand, one thing's for sure... if the spirits made for powerful weapons against humans in war, then they can make for powerful protectors against them, as well.

Looking at Kotori, something echoes in your mind.
It's the words of a dear former friend.

"You must keep her safe." 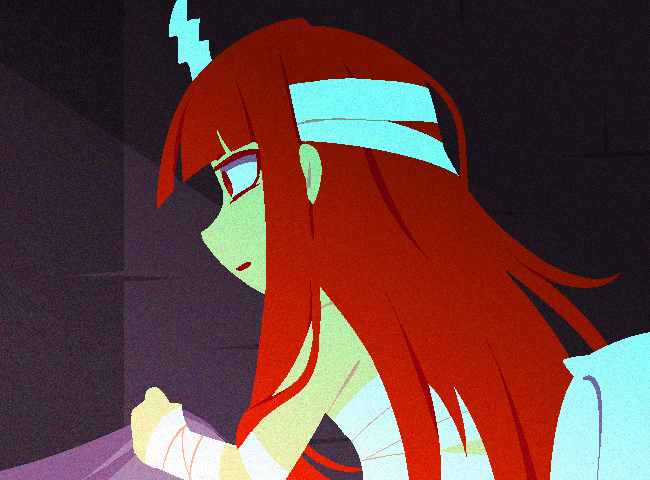 That was the prince's command to you, on the day you first met Kotori.

In an area nowadays known as the Royal Marshes, Prince Suvillan IV had just assumed his new position, and declared his status to the survivors of the war.

In the name of furthering his power, the former monster prince had initiated a direct attack on humankind's former princess. His people were all but expandable corpses, used for nothing more than bringing him closer to his desired victory.

It was a bloodbath, through and through.

But when the new prince faced the crowd, he called you all his power. You weren't nameless soldiers, tools of conquest, but a part of his world, and a part of himself.

"If I am to embody this world, then you all are the blood that flows in my veins."

Prince Suvillan's first order was to address the drastic loss of lives, by caring for those whose lives could still be salvaged. So you sprung to action, rushing to help take care of wounded survivors, just as his highness wishes.

Among them was this one feeble monster girl.

It was the first dawn after war.
Subscribe
Login
9 Comments
Oldest
Newest Most Voted
Inline Feedbacks
View all comments

The woman teaching Solis about Niyran and lordly-duties here is the current Regional Lord of Niyran, and his oldest aunt, Phoebe Ardor.

She's one of the people currently at the celebrations, seen in a previous panel featuring Suvillan, Corona, and the rest of the regional lords.

Solis> If a human could try to take the life of the human prince, perhaps a monster might be behind a plot to kill Suvillan?

That would actually be a really good twist since this whole time its been hyped up as Lune.

Wow... the call is coming from inside the house

Solis: Recall your work in the medical ward, along with how you met Kotori.

Solis: What a pitiful state she was in.

Past Solis: Calm the redhead down. If she strains herself, she could reopen her wounds.

Past Kotori: Realize you aren't where you were when you went unconscious. What do you last remember?

Past Solis: Explain the situation while trying to ignore the fact this girl is actually pretty cute (ignoring the major wounds of course).

Solis: But she didn't just leave your life now, did she? It's never that simple.

Solis: Kind of ironic actually (is that the right word?). You thought she didn't need your help anymore, but in truth, she needs it now more than ever.

spirit: prank solis, maybe turn invisible and give him a wedgie. you know for insulting you. this way youll be even.

Solis: Calm her down, make sure she isn't seeing any red.

it seems to me alone that the killer of the prince of monsters will be Nino. 🤔🤔