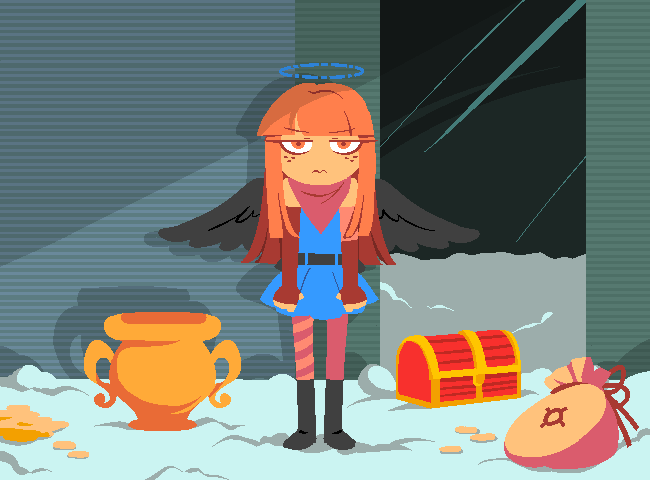 Kaji: Tell Mei of the fine she'll have to pay for all that stolen property. 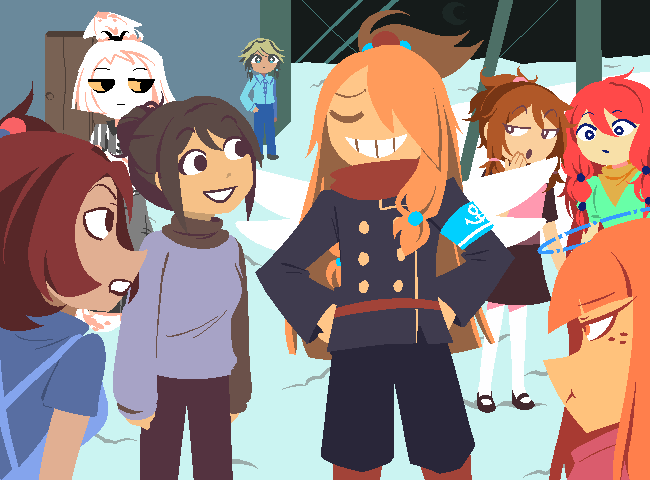 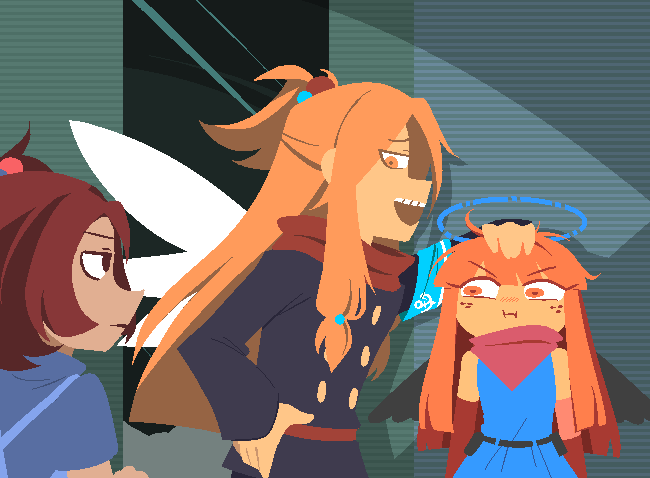 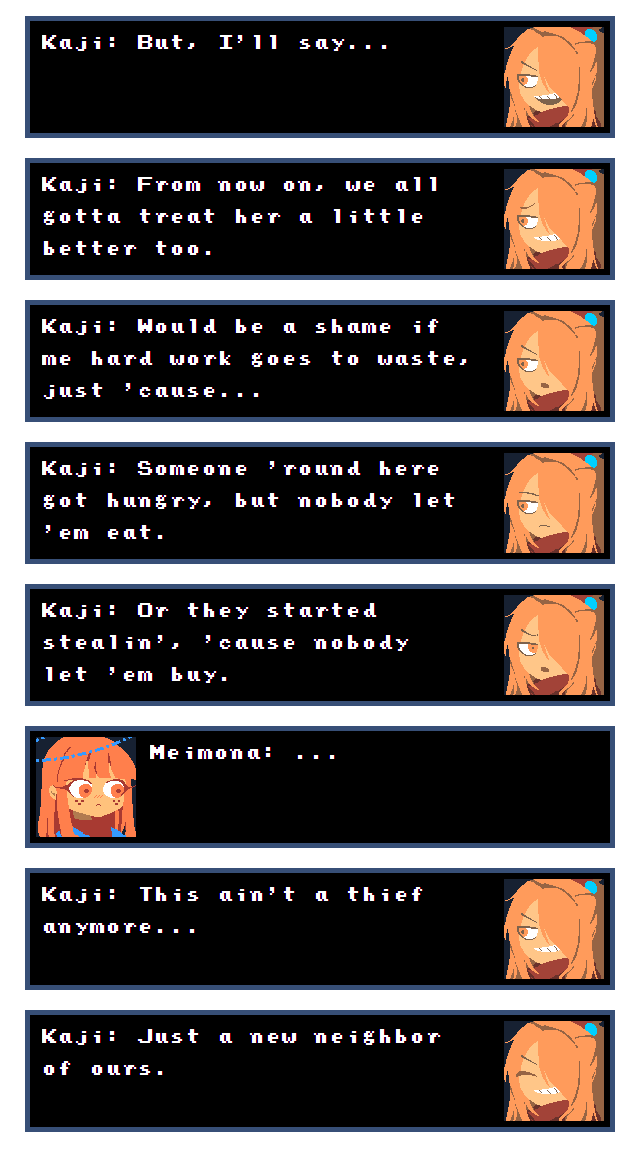 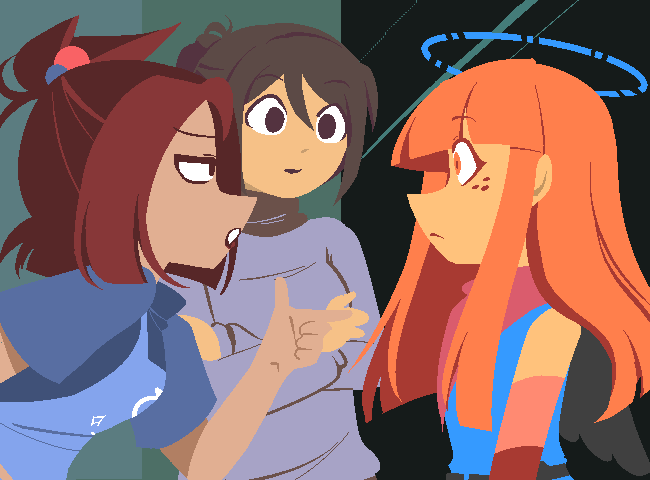 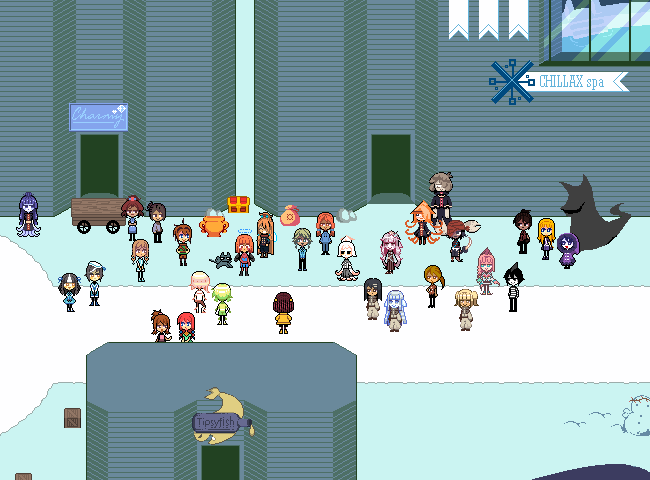 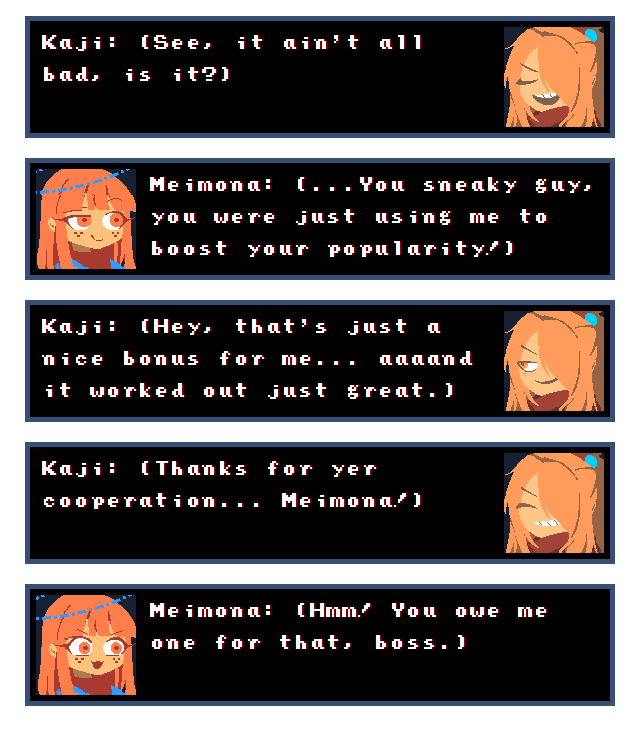 So that's how it is now.

Everyone is saying that the captain is being way too nice to a thief, but that seems to only improve his reputation further. He knew exactly what he was doing here!

Under the pretense of "reflecting on wrongdoings" and "paying back"... Mei has received a new job with the sea patrol, and a home in Icicle Bay. 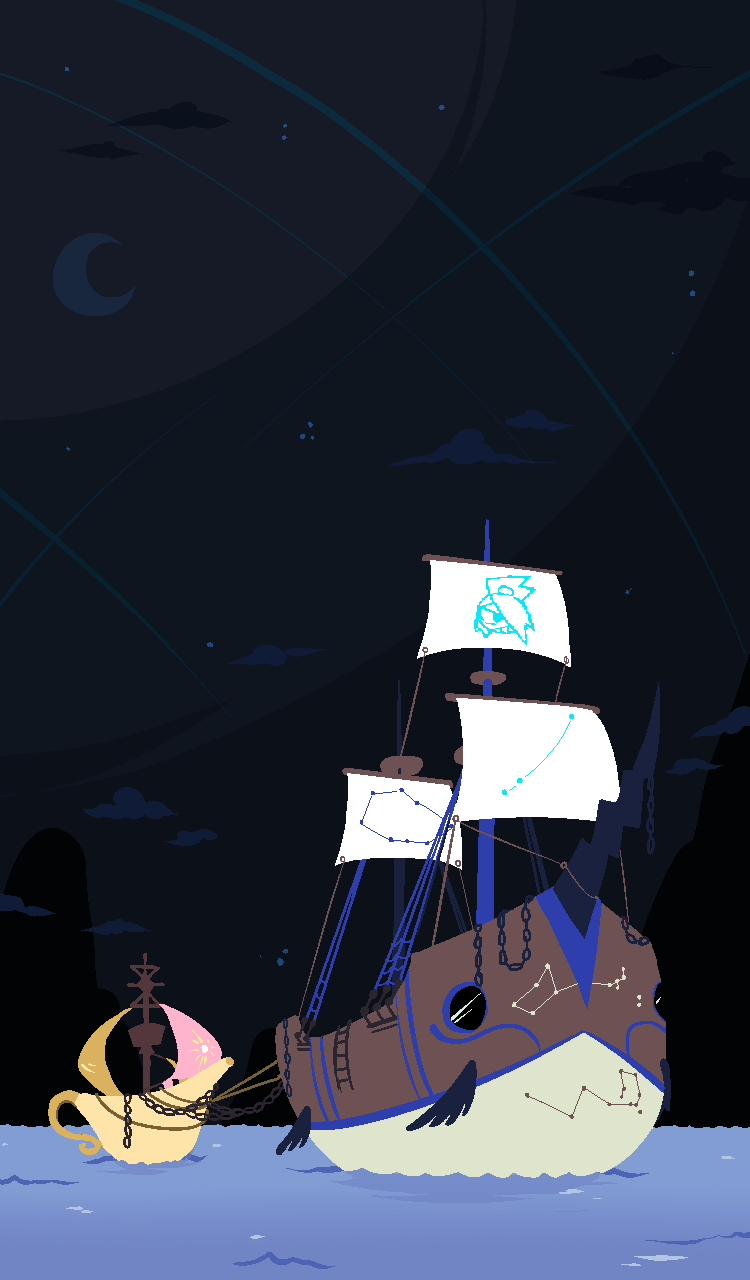 Before Kaji agreed to sail you all here, the two of them struck this deal.
It allowed you all to receive "full pardon", so to speak. 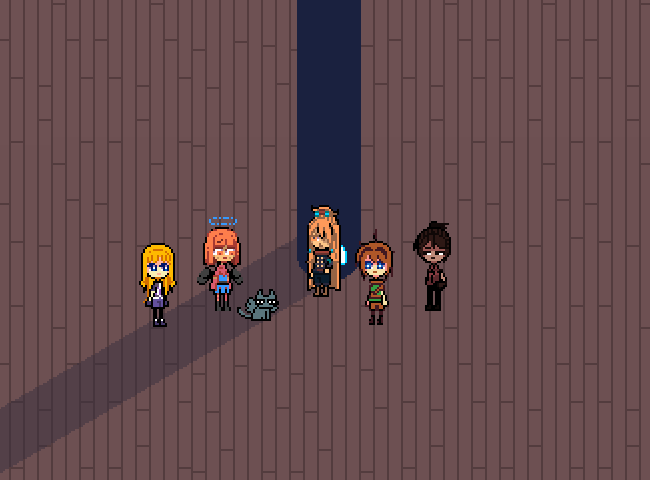 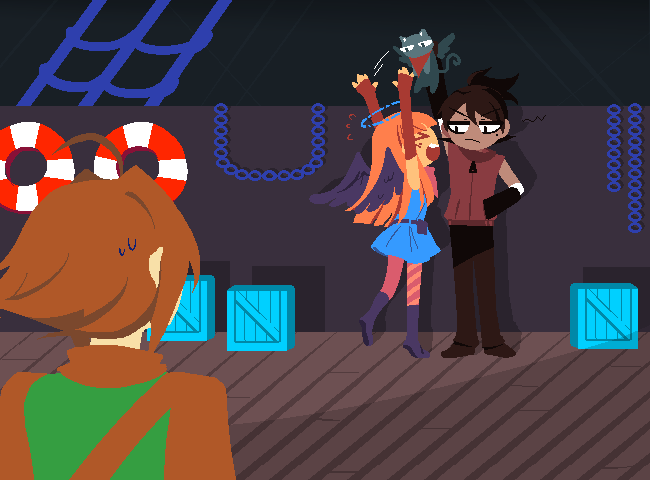 Mei and Boyfriend: Recall your first few days in the world of humans. 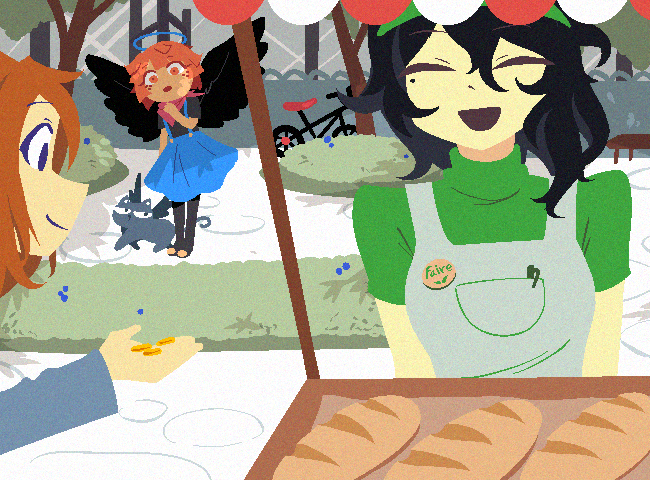 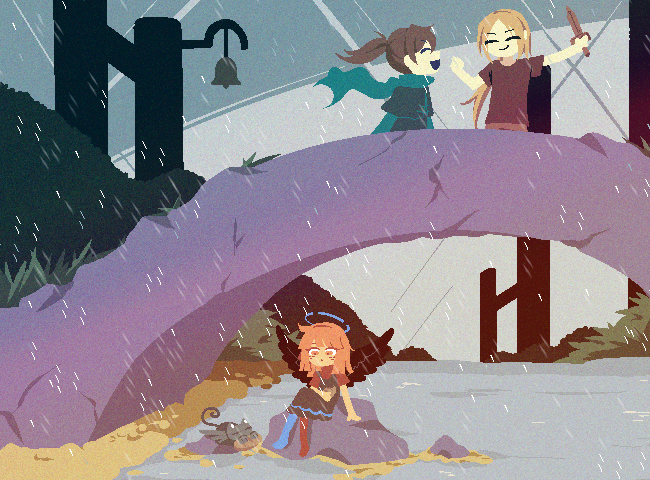 Mei: Consider the prospects of an honest job. Stability, comfort, no more running, no more living on the edge.

You, Aria, and Reed, simply observed as the two winged conversed.
Somehow, it just didn't feel right for humans to jump in.

But just like that, you were all graciously let off the hook.

People who stand out, who feel like outcasts...
It seems that they have to band together in the world of humans, lest they be shunned by the majority. That's what the sea patrol accomplished, didn't they? Seafolk and other "odd" beings now stand on equal ground with humans, even becoming known as the very protectors of their shared community.

It's funny, the ones Mei ran away from may turn out to be her best bet for survival! 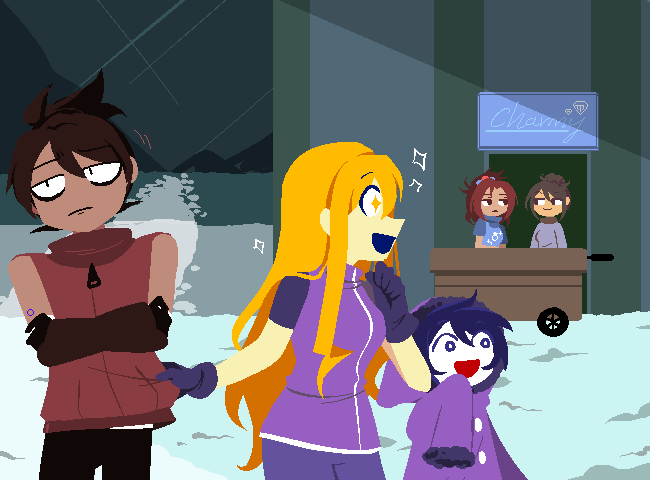 Aria: Talk to other human beings! 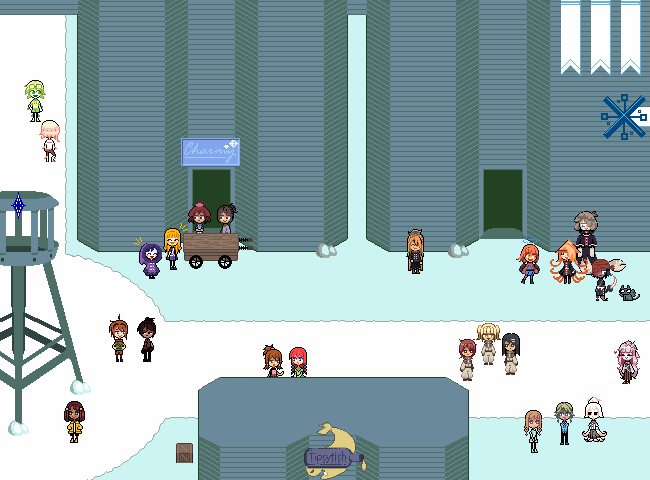 When Kaji brought you all here, he was unexpectedly nicer than expected.

Or perhaps, you should say that he was generous.

His words were definitely not nice, they were full of swears in fact. But, he generously said that he'd arrange for you a place to stay at for the rest of the night! A very generous deal, since it's terribly late right now, and you won't be able to leave the island for a good while.

Now then, there should be a temporary room under your name in the penguins' inn.

You suppose that offer extends to whoever you choose to bring along, as well... and it seems like Reed has already counted himself into it, for one. Well, you don't mind any or all of them coming in, actually.

They're all probably as desperate as you are to get some hard-earned rest, after all.

This is also your chance to talk to Kaji, or ask him about anything you have on your mind, as well. You'd better make the best of this peaceful outcome!

Nino: Say to best boy that he is amazing and deserves love for what he did for the sea people and your friend Mei of course!

Everyone but mostly Nino: Make unknowing references about Mei’s luck but Nino be knowing.

Nino: Begin to have your suspicions.
How come it was all that easy? I mean, you all practically walked away scot-free for an offense that Kaji was wanting to throw a whole wave at you for. Now she's paying for a room at an inn for you guys? Isn't the easiest way to hold someone prisoner to not know they're a prisoner? If you believe they're a friend you'll stick around rather than try to escape. What if Kaji is just holding you at icicle bay while she waits for royal soldiers to arrive and arrest all of you?
Nino: Inform the most sensible member of your new party of your suspicions.
Reed: Contact family.
Aria: Be suspiciously human like you never could before.

Nino: Ask Kaji about why he let you go despite what you and the other humans did. Ask how did these people change their minds so easily about both him and Mei. Tell Kaji you’re sorry for what you did. Ask him what he meant about you looking like a noble, because in your eyes you just seemed normal, and in that question, make a joke about what do you look like, and then ask seriously what do you think I am so as not to tip him off to your amnesia. Ask Kaji why he was reckless with Aria and that girl, and his opinion on all of your companions. Ask Kaji the requirements for leaning the one handed eagle style or to be a soldier, and ask him to inspect your sword. Ask him if there’s any way to repay him and consider asking it so you can get money, as you too need funding. Tell him that you didn’t want to go to jail because you thought you were gonna die, and then brush it off by saying you panicked. Ask Kaji about his superiors. Show him the two-sided note. Ask him about parties and stats.

Someone who remembers the note! Hooray!

This might be the most surprising way things could've gone, to me. I had figured the party being on the lam was gonna be the thing driving the plot for the foreseeable future. If they actually are out of the woods here, it'll be interesting to see them have a chance to relax a bit.

Though, I am a bit surprised Kaji was willing to let everything go that easily. He seemed like the type to hold a grudge, and even if he wasn't that's still a lot of bad blood to be able to forgive. Maybe this is a trick? Or maybe I'm just looking a gift horse in the mouth.

I actually didn't expect this outcome to be that surprising, but I'm seeing here that this is a common sentiment! I guess I'm gradually learning how being in the writing seat causes unexpected oversights sometimes.

However, I do want to say that Kaji's personal reasons for his decision get to be better expanded upon in the next update, largely thanks to the commands submitted in the comments so far. So for now and until then, feel free to draw your own conclusions on our pirate boy here!

Personally the sticking up for the ocean-people part was good foreshadowing, though maybe more mentions of the tension between the humans and the sea-people would have helped in that regard.

Nino: Recall the librarian mentioned Kaji might know about memory-recovering methods.
Nino: Ask Kaji about it.
Kaji: Be AMAZED at how the FAME of your REVOLUTIONARY memory-recovery techniques has spread far and wide.
Kaji: Illustrate this pleb.
Nino & Kaji: Get wasted.