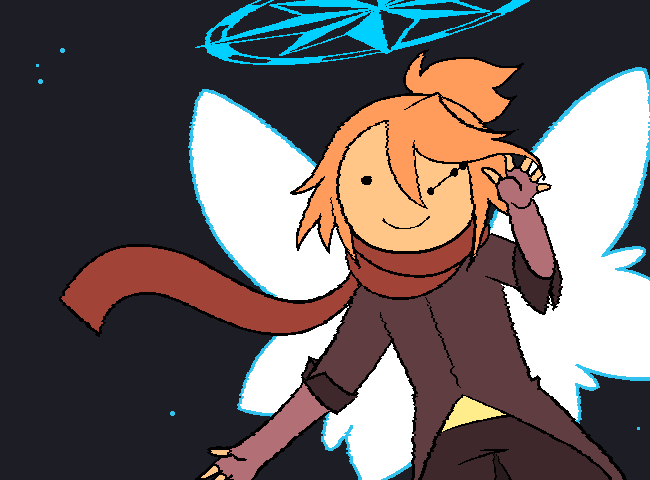 A young man, born with the gift of guidance.
He speaks gently to the personification of destiny.
I have four eyes to be a guide.
I am a vessel for you to command.
I will guide you to whatever you desire.
So come on, there is a lot to learn today. 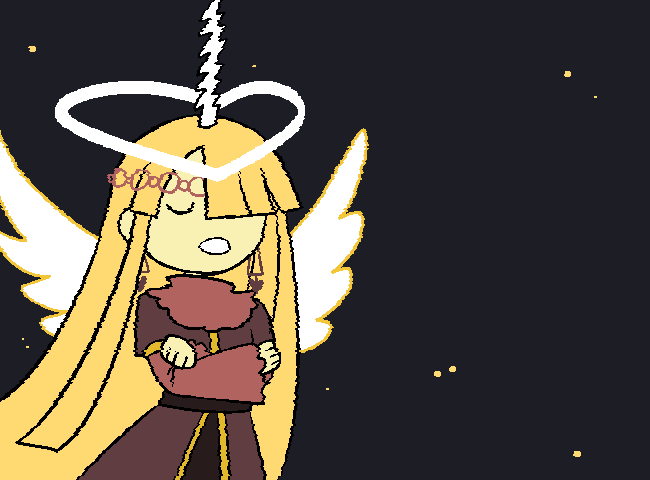 However, the immature lady rejects boundless knowledge and eternal enlightenment.
That is not what I desire.
I want to play in the fields.
I want to watch the fascinating little humans and monsters.
I want to catch a firefly in a bottle. 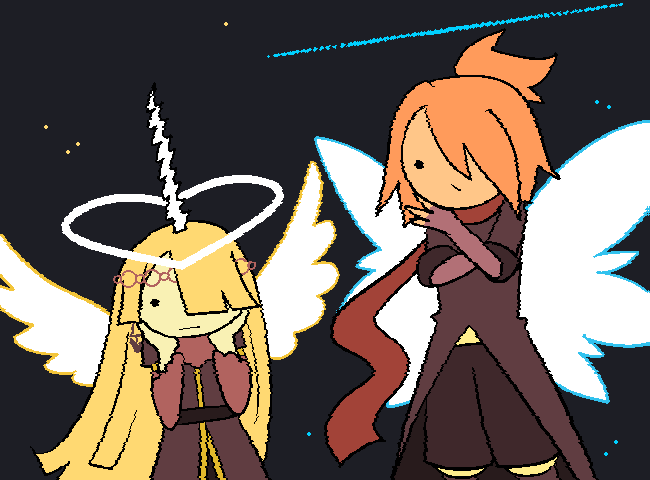 But work is important too.
I know that!
I must not let everyone down.
I must learn to be a queen and unite my people.
I must gain power.
But I do not want to do any of it right now.
It is too boring to think about!
You are a strange girl.
Perhaps disliking responsibility is normal at this age?
So then, it makes me normal!
You are the strange one, Kaji.
We are but a year apart! You as well should not be so fond of responsibility.
Play with me for today. Work can wait.
I want to show you the humans and monsters!
They are much more interesting than winged and celestials.
They lack wings, they lack divinity...
Are you certain they can be that interesting?
Yes! I would not tell lies to you, Kaji!
Besides, don't you want to see where the knitted gift you wear came from?
I suppose I am a little curious... 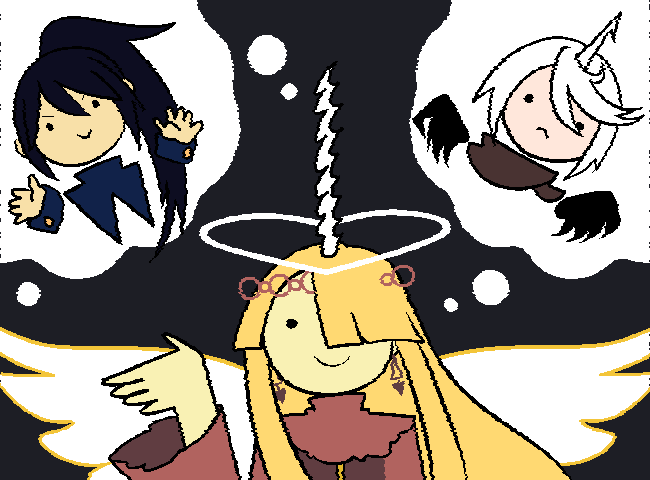 The lady, ever so inquisitive, went on to learn much about the beings that inhabit lower domains. She slowly taught the young man more and more about humans and monsters. Fascinating beings, they are. She even brought souvenirs from those domains to the moon, an action most perplexing to her loyal retainers.

And the young man wondered, perhaps it is the limitations of monsters and humans that interest the lady. After all, she bats no eye to the potential found in her existence as a limitless being.

Humans are curious, but they seek knowledge only to help their loved ones.
Monsters are tough, but they use their claws only to protect their dear home.
As the lady spoke so favorably of the two, she compared herself to a curious human, and the young man to a protective monster. Hoping that, perhaps, he could come to agree that they are not so different from each other.

Instead, the young man realized the lady disliked her duties as a monarch only when it was something concerned with her wellbeing, and hers alone.

Her heart had love for others, but none for herself. 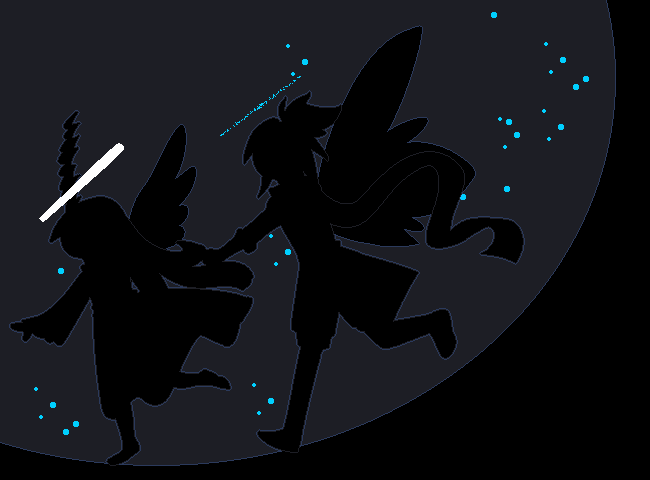 And just like that, the young man decided.
Perhaps directly learning about one's people shall be an acceptable lesson for a future queen from now on, too.
So come on, let's go!
I'll show them to you today!
Sure, sure.
Just hold on carefully, so that you will not be lost.
She stumbled on her feet in a hurry, seeking the beauty found in fleeting lives.
Yet, she did not fall, for the young man supported her all the way through. He believed he'd supported the lady simply because he was born to do so, but he did not realize that a part of his actions was motivated by a bittersweet sympathy.

Sympathy for this lady, who is the opposite of an ideal monarch.

Indeed, who would dare pity the lord of worlds, the ruler of rulers? The thought had never crossed his mind, because he was adamant on not forgetting where he stands.

Or so he thought.

Kaji: What are you dreaming of? 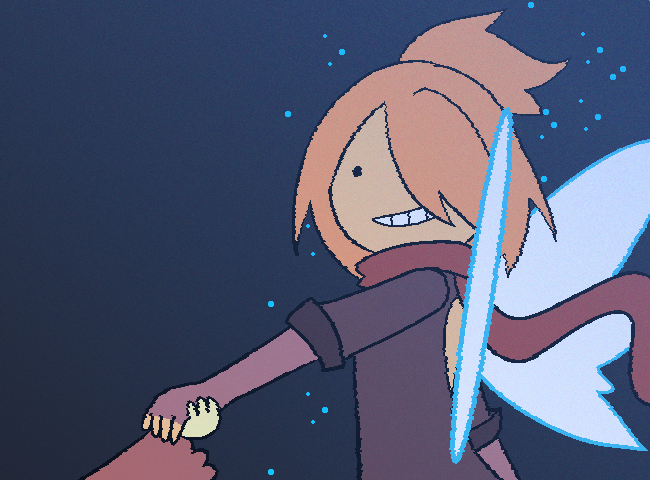 Dream? What dream?
You're here with the queen!

But what's with this annoying noise around you, anyways? It's supposed to be just the two of you here! It's like someone, or someones, have been bickering nonstop nearby.

You're gonna go find out who dares to bother you like this, and SHUT them up. 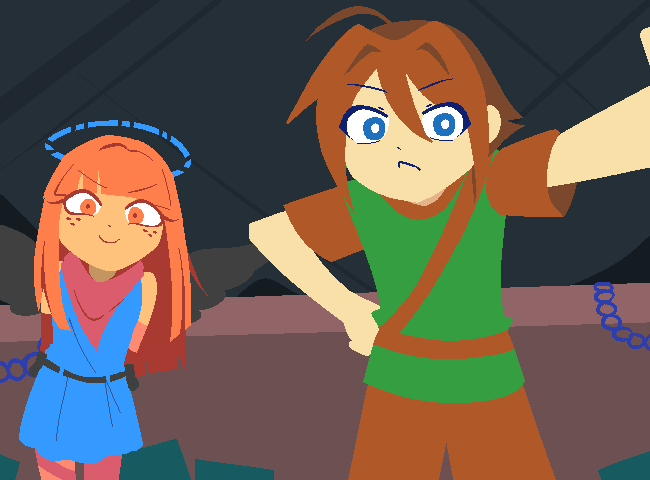 Hey, look, a human.
Why does he look so familiar?
Wait, where... are you? This isn't home.

And why can't you move? 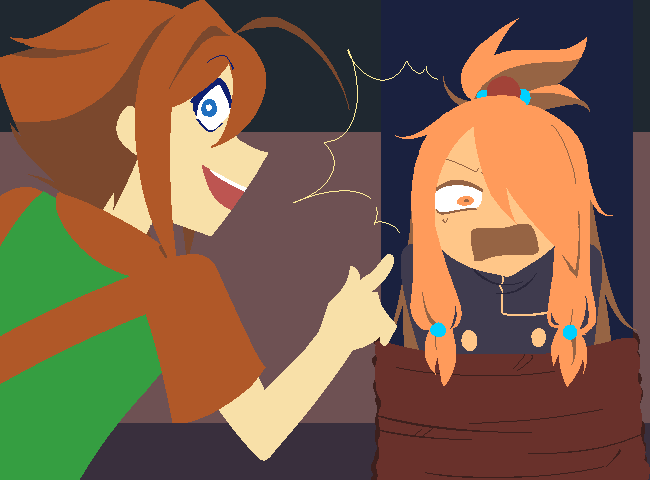 Oh, god. That's right.
It's all coming back now.
Everything. All of it. Painfully so.

A bunch of kids beat you up in a fight that probably would be fun to watch if set to some cool background music, and now... they think you've become their prisoner, don't they? The smug expressions tell it all. Why, this is all so backwards!

What kind of cop goes to his own jail, held by his own ropes!?
No way in hell that's gonna be you.

Nino: Don't get bullheaded, shouldn’t you be a bit more cautious? 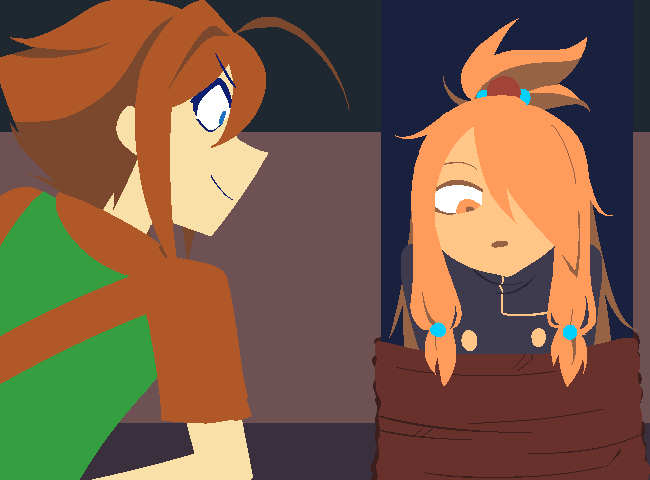 You ARE being cautious, aren't you?

You've already confirmed that this ship is totally empty - indeed, not a soul here besides the captain himself, who was successfully beaten by YOU earlier. That's the first thing you've checked for!

And just look at how pathetically helpless he is in this state! There's nothing to be worrying about when you've got him surrounded.
You'd say you're as cautious as is appropriate in this situation.

It's going to be so easy getting your way here. 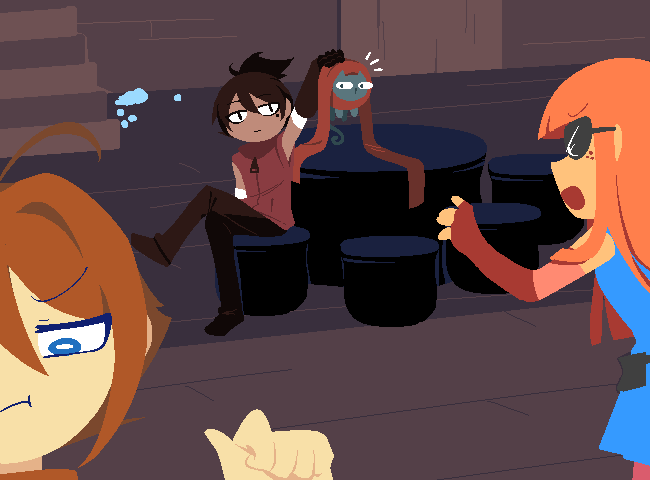 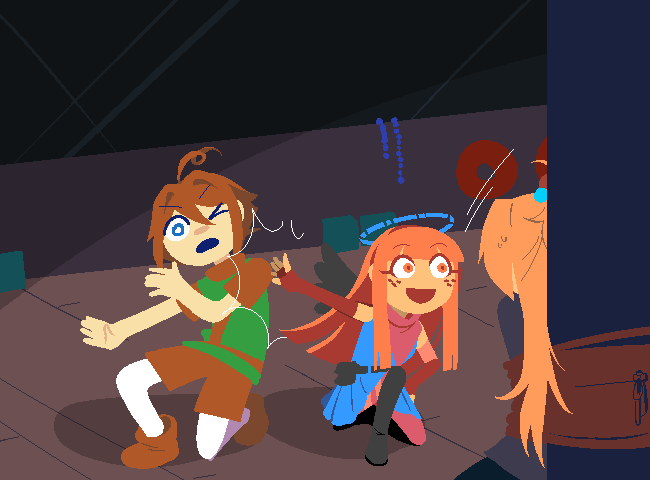 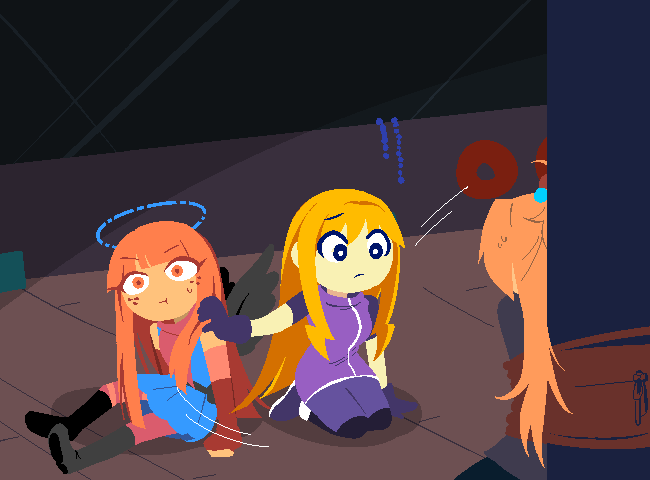 Meimona: What a dumb plan!

Constructing words heartfelt enough to tide Kaji over is not something you're capable of. However, Aria is, even though she's not doing it on purpose. Just by speaking her honest thoughts from what she's lived, she's said things that would surely resonate with an outcast like this guy.

You're forced to admit it, she may be the perfect person for this kind of negotiation, after all. And yes, none of what she says resonates with you at all!

So fine, whatever, you can sit it out, and you will do just that... As long as you still have your uses, even if you can't handle this specific problem. Right. 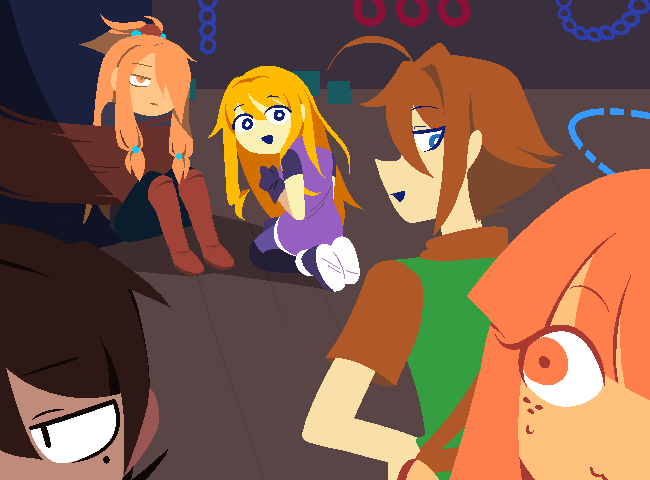 Kaji: These kids have looked down on you long enough. 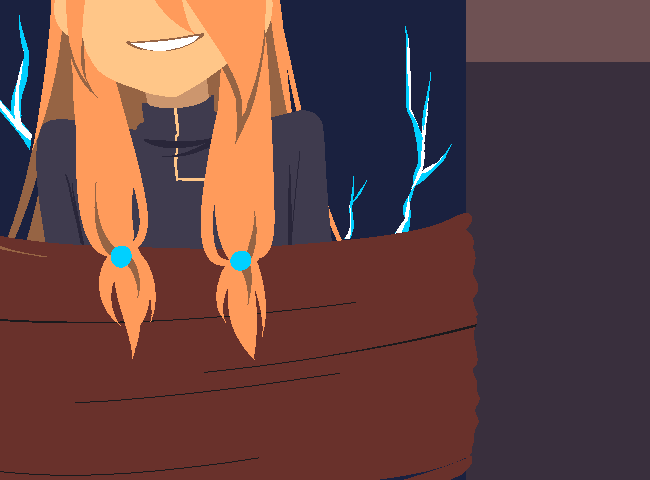 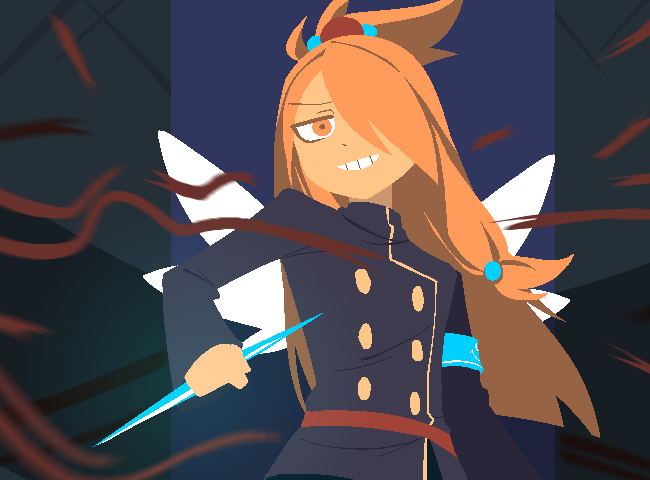 Ah, what the hell! That surprised you!
You were so sure that he wouldn't dare try anything, but-

Nino: But you still have the upper hand...? 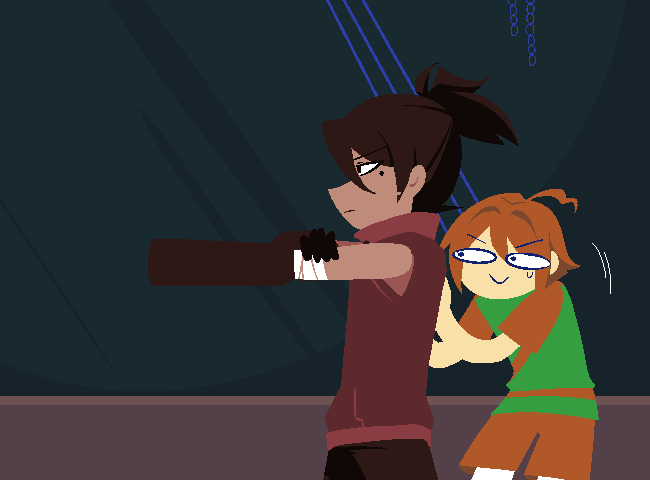 Yes! Ha, would you look at that!! No need to panic at all!!!
You quietly appreciate the fact that someone this battle-ready is on your side.

Bet Kaji really wishes he had brought his patrol along now! 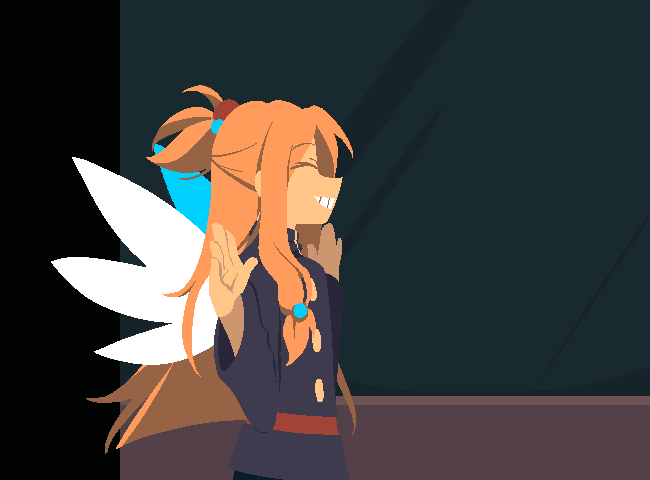 How can he still be acting this confident?
He should be intimidated! Silent! Shivering in fear from your might!

Yet, it's as if he's the one sparing your lives. 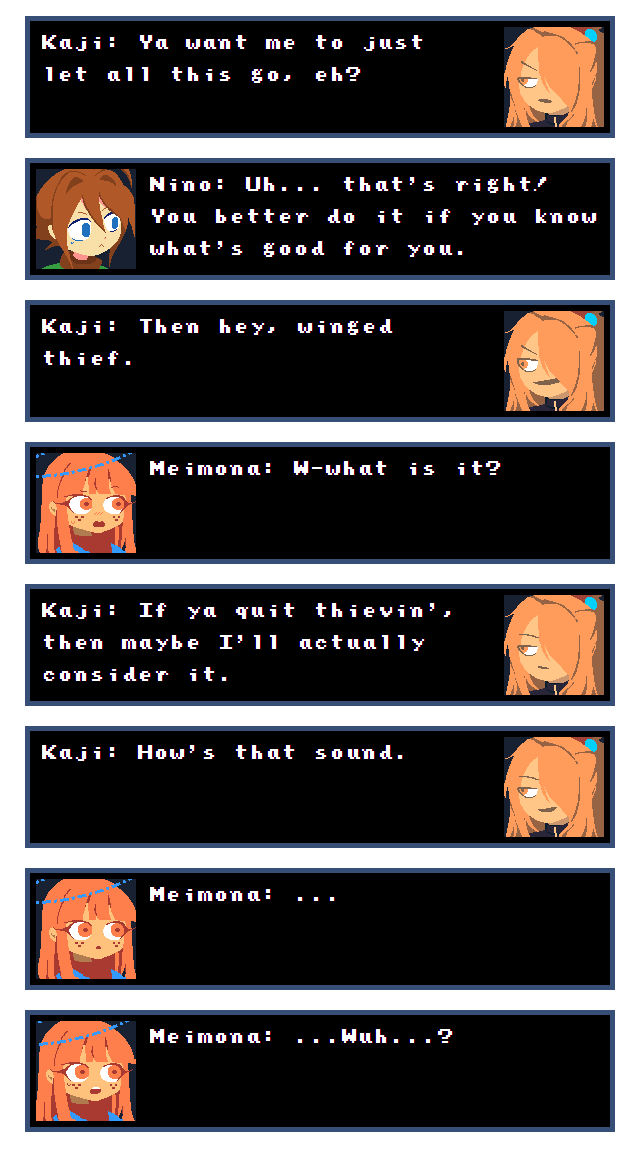 Meimona: Consider returning what you "borrowed" and hear Kaji out, after all, Nino and the others seem trustworthy, especially Aria, and she has a stealth ability, allowing you new avenues, plus, the more people believing in your luck, the better you are! Though maybe you should wait until after you're done with Kaji for that.

Mei: Consider the prospects of an honest job. Stability, comfort, no more running, no more living on the edge, just a nice home in the suburbs.
Nino: Suggest adventuring as a profession.
Reed: Use your connections to expedite your escape.
Ludwig: Jumpscare Kaji
Kaji: Tell Mei of the fine she'll have to pay for all that stolen property.

Mei: ask Kaji to elaborate. Surely, you can just go be a thief elsewhere.