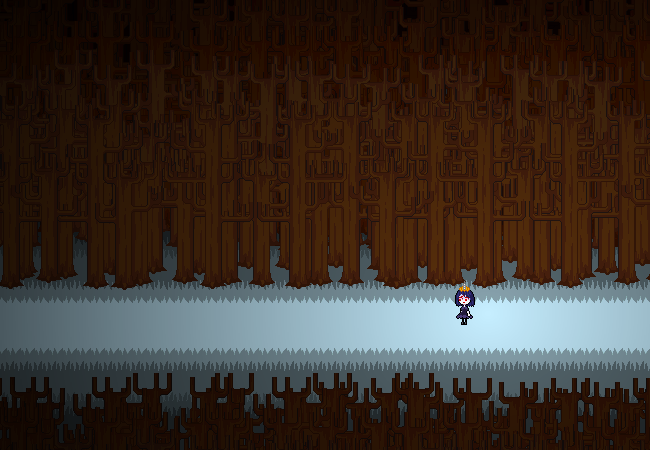 Five finds it hard to avoid doing something so simply.

Nothing is behind Five, not even Ludwig. Where could Ludwig have gone?
Why did Ludwig leave Five? Why does everyone leave Five?

Five... Thinks that Five knows why. 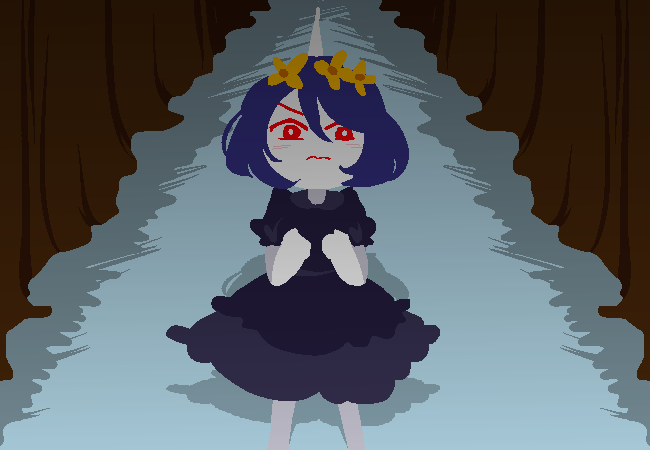 It must be because Five is weak.

Five sits and waits for friends, always. Five never does anything herself. Friends always have to defend Five, makes Five feel like... Big weight. Big responsibility.

Five doesn't like that! Five can take care of Five's own responsibility. Five will find friends on Five's own! 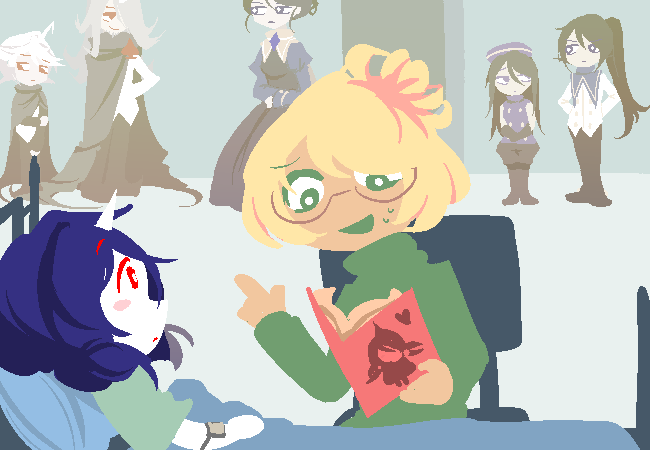 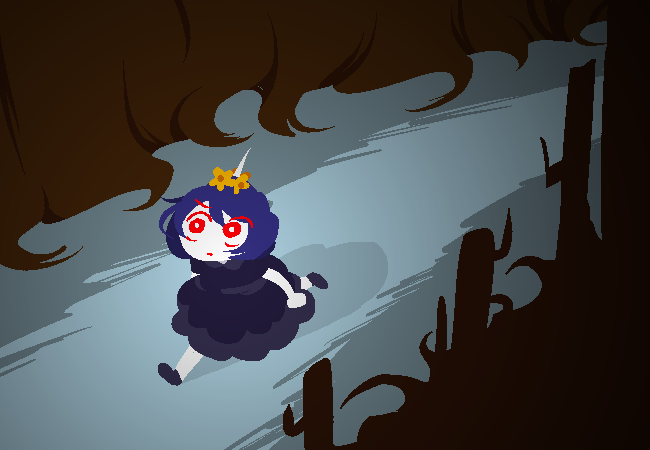 The forest reminds Five of a very old memory, from the very early days in Five's new home. Days when a strange prince would come by, days that held rare moments where the beautiful princess would lose her composure and manners, all because of that prince.

The strange prince only smiled when the princess was frowning. They did not like each other, and everyone could tell. Their respective heirs seemed uninterested in their lengthy squabbles, constantly wondering aloud when they can go back home. While the princess' heir was simply bored, the other heir always held an air of timidness around him. It told Five that he was never here by choice. It reminded Five of a very isolated begonia flower.

Although the two sides always argued, they would still work together.

Sis would read Five stories and play with Five, hoping to distract Five from the passive-aggressive royal chatter that always filled the background then. That time, Sis was reading Five a cautionary tale about a monster girl named little red riding hood.

Mother, what big claws you have got! - Said little red.
All the better to tear your soul up with! - Sneered the spirit.
And so on went Sis' tale. It detailed many taboo acts and locations, like how one shouldn't wander alone in forests, and how one shouldn't trust ghastly beings. Little kids should remain wary and listen to their guardians, lest they be tricked into losing their soul like little red was - And the tale finished with that lesson.

Ghastly beings aren't so bad, Five knows that now! Ludwig, the ghost dog, is a VERY good boy. Little red in the story must have been a bad child, unlike Five. Bad things happen to bad children, but Five is a very well-mannered child! When Five gets home, Five will introduce Sis to Ludwig. Everyone must know that ghosts aren't all so bad!

Five: Check for traces. Something in the snow or any clue left around as to where Ludwig might be. 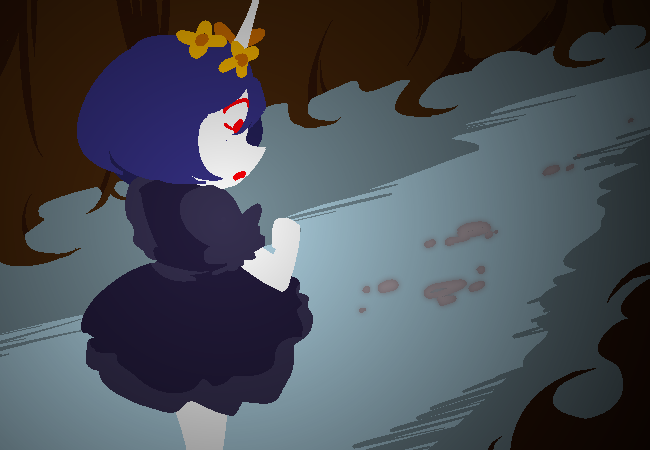 Five notices drops of ghastly blood on the ground. This must surely belong to Ludwig! Five remembers that Ludwig was injured running away from the mean spirit earlier, that's why he's bleeding.

Five needs to find Ludwig and stop his blood. 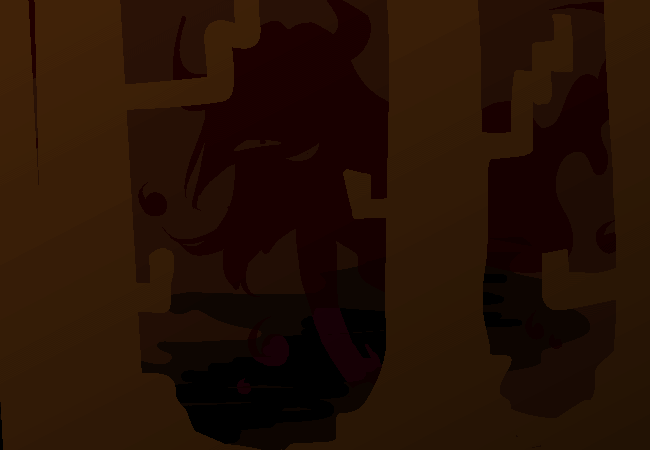 A grim presence counts the distance. 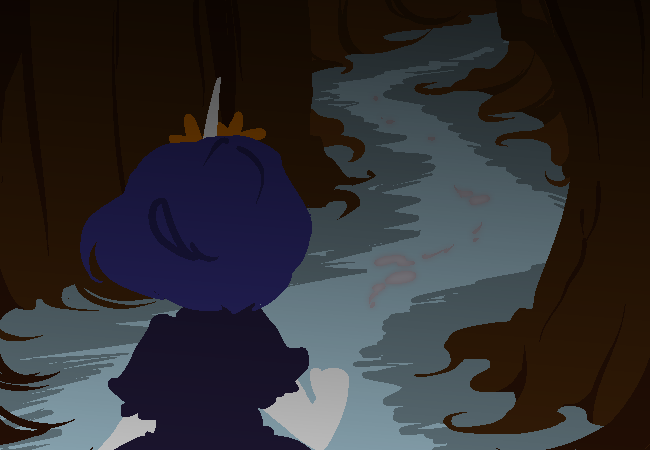 The child is now running.

Solis: Set something on fire already. We've been waiting. 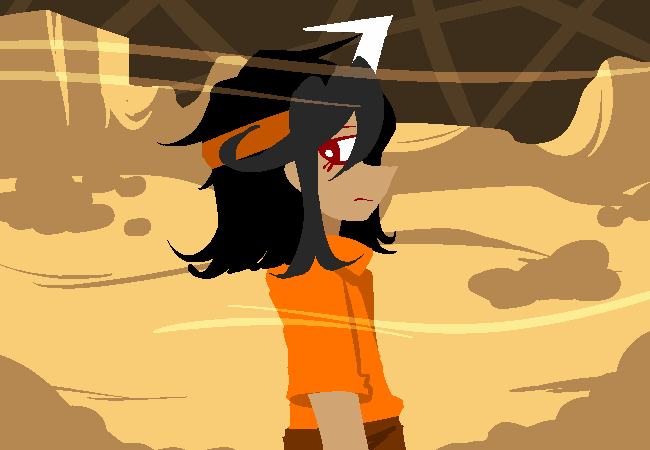 There's no reason to do that. As fun as randomly setting things on fire might sound to others, you'd much rather conserve your energy for real emergencies. Nobody should use their ability just for fun.

Anyway, you're finally done with business in Red Tulip and his highness' court, so you're heading home. Before you left, Corona asked- no, practically begged- for you, her, and Kotori to hang out again, which is a Very ridiculous request. Very with a capital-V, that's how ridiculous it is. Things just aren't the same.

You kind of wish they were, though. 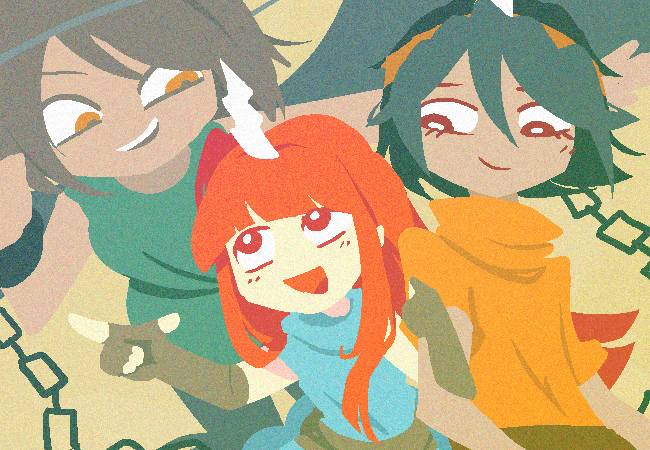 Back then, Kotori used to smile more - and so did you.

A sudden war had happened, and you were very suddenly thrust into the role of an obedient servant. No ties to humans, eternal loyalty to the throne - you abruptly got separated from all your friends in the human world. Then, you found Kotori.

Befriending her and Corona helped you recover from losing your previous friends. It felt like it was just you three in the whole world, working together, laughing together, doing everything together. The three closest servants to his highness - and the three closest friends in the monster world. As a naive teenager, you thought it'd last forever.

But change comes like a swaying row of dominoes. First, Kotori broke up with you, and that tilted the first piece down. Hey, it was fine, you thought! You're enough of an adult, you could handle that much. As long as all three of you remained friends, that is. But that didn't happen.

One day, Kotori, the model of philomathy itself in your mind, lost all the curiosity her eyes had held. Suddenly she looked like she knew all that there was to know, and more. When she before would ask you to teach her various things about the world, now it seemed like she knew more than you could possibly offer. Anything she was involved in, she treated as a waste of time. Plenty of classic sorry-I-can't-come-today excuses were thrown towards you and Corona in response to any invitation for a fun pastime.

You and Corona didn't get along by yourselves. Corona went on to be more closely involved with his highness, and you found nothing to focus on besides taxing, but well-paying jobs, and a quaint life in your humble home. You had to move on, just as Kotori did. And so you did.

Corona has to understand that that's why you said no. 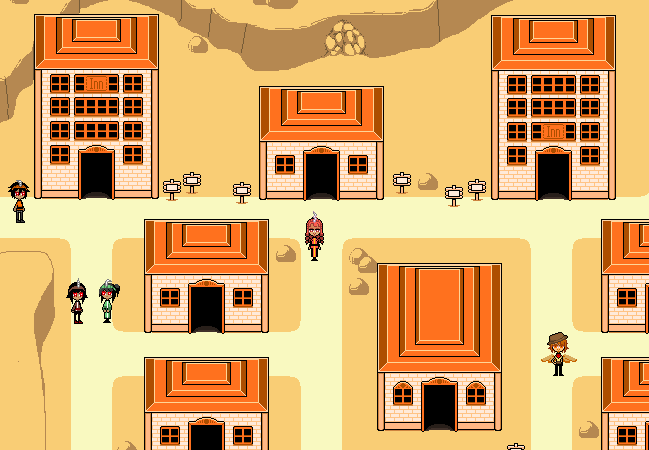 You snap yourself out of your thoughts. No use thinking of the past now, it's just frustrating to realize an end of a friendship is inevitable. Gotta save your energy, don't think about it.

As you enter your hometown and uncoincidentally assigned area, you notice a familiar face. 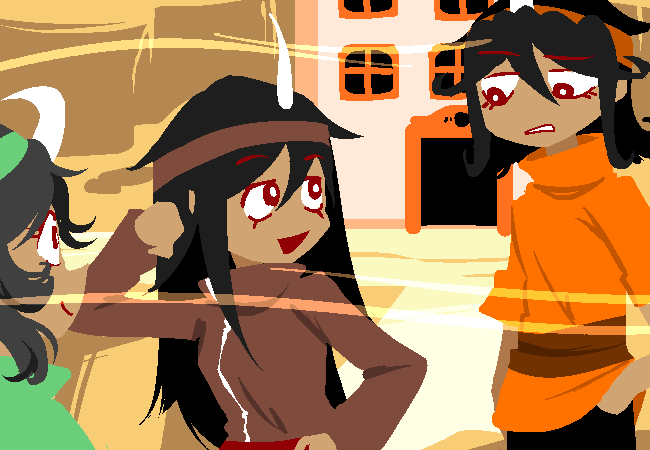 Hey, stud, you come by often? The girl says and giggles like a dumb teenager, because that's what she is. You ignore that remark and you ask her, what are you doing here?

She says WOW old man, you're not my dad! It's not your business that I'm skipping my classes. She and her friend giggle in unison. You say, I didn't even know about that and I don't care. Then you say, I thought you had business in Red Tulip?

She looks at you like you're one of the world's five wonders.

What, you say flatly.

You say, seriously, what is it?

We have never left the town today, she says.

To which you respond, WHAT THE FUCK.

Kaji: Question why it is that people would think so poorly of you. Surely they are simply mistaken in their views? 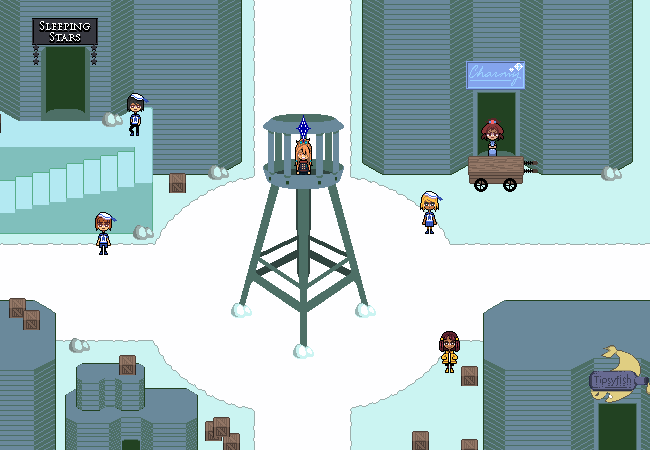 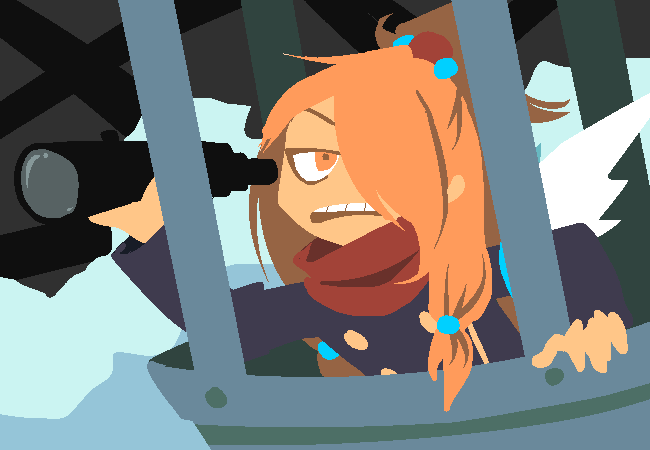 DUH, they are mistaken!

It's all because you're undivine. You see, the winged are born with a halo, and it provides them with an aura of divinity or some- some bullshit. You don't even know or care. It's stupid.

You fell and lost your halo, that was the moment you arrived here. And just because you're a halo-less winged, that's a free pass to call you worthless for these people. Humans are so concerned with others' looks alone, it disgusts you.

But like, you don't care. You're fine, even if you're no REAL winged.

Kaji: Be the thief. 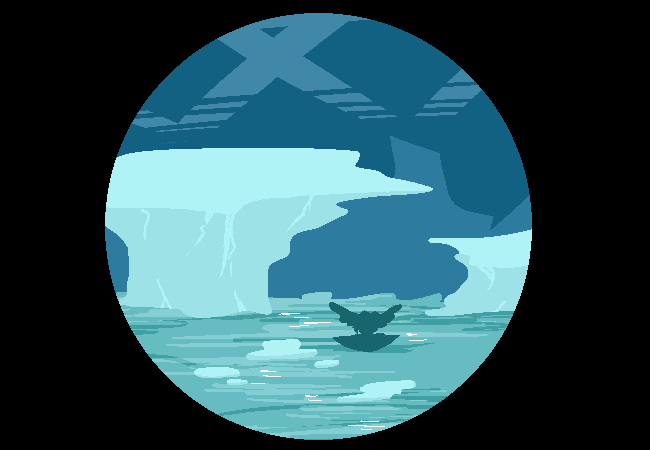 You can't be the thief because you're trying to find her!

You check with your monoscope for any UFOs - Unwelcome Flying Objects.

There's something there.
In the distance, a foggy figure on a boat. With... Foggy wings. 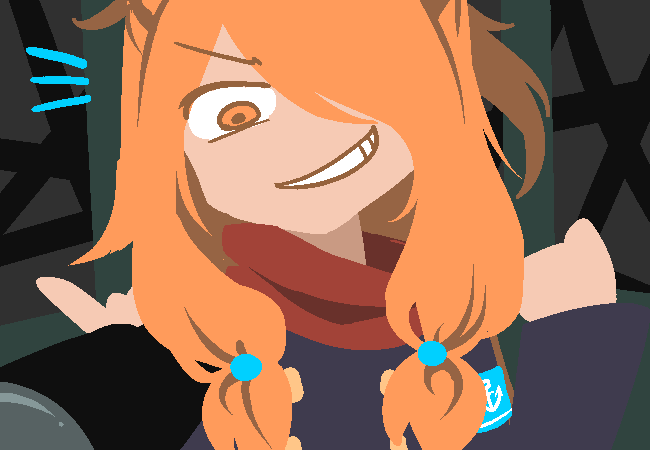 That must be the lousy thief. How dare they set foot- erm, set boat, on your sea!!!! You're going to get your ship ready and catch them in the act!

In your excitement, you spare no moment to wonder any further on just why the winged thief would be sailing the seas rather than flying.

The answer is, of course, is that it's no winged.

Nino: Was the human world always this watery? 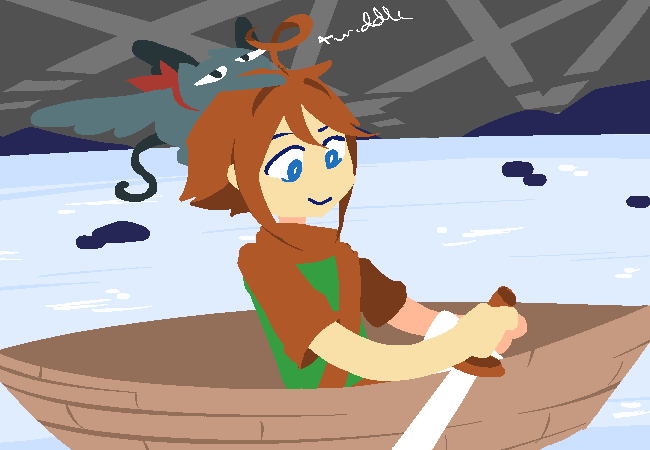 You think so, kind of.

We've been all over your memory issues, so that's not a very trustworthy statement. Although, you feel like you remember more gardens and vegetation than water - but yet again, probably an untrustworthy memory.

But it's alright, you're getting closer to the island! Talking to residents should be helpful. Maybe there's a cure for your kind of amnesia there, too.

Nino: Look at the note in your inventory 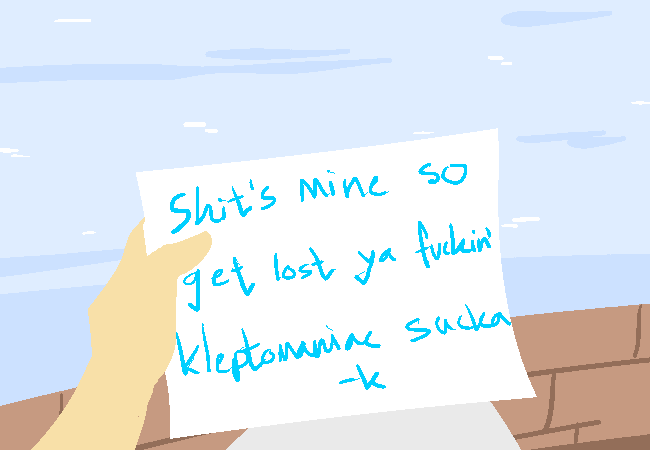 Earlier, you wondered if your inventory could have anything helpful for memories, and it only had your weapon and ability, plus this very stupid note.

Shit's mine so get lost ya kleptomaniac sucka
-K 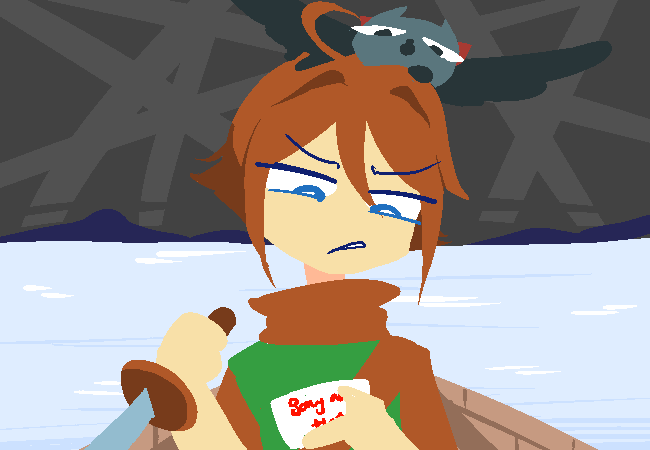 You don't know why you have this, but just looking at it makes you really upset. You wonder for a bit if it's really intended for you, but then again it was in your inventory. The only thing more perplexing than the source of this note, is what it says on the back.

Sorry about that.
-T

Bah! As if an apology like that is enough! Plus, the differences in tone and handwriting makes you think this must be another person's writing. As if apologizing in someone else's place is ever a good thing! These people have no manners.

Cat meows, and you take that as agreement.

Kaji: Fly down and defeat the thief once and for all!
Subscribe
Login
1 Comment
Oldest
Newest Most Voted
Inline Feedbacks
View all comments

suvvilan is in the background. He may be like Nino but wants revenge on the humans for his parents dying.