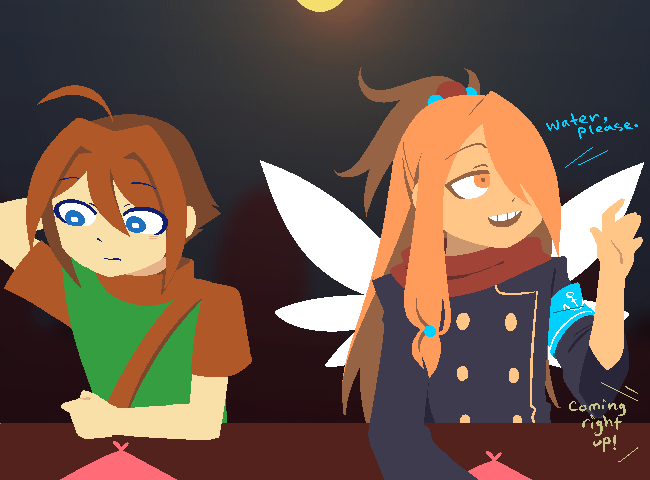 You feel like a child who just got counselled by a careful adult.
But despite the topic's weight, Kaji maintained a sincere smile throughout it.

It seems like he still somehow exemplifies that "guidance" thing whenever he takes matters more seriously, even though he said he's lost everything from his past...

It's funny, a tale that extends from the moon to the earth makes you feel rather insignificant, but not alienated nor patronized. The winged are mighty compared to humans, but even someone like Kaji is susceptible to the same struggles as you.

Nino: Now help a new friend by telling him who he helped. 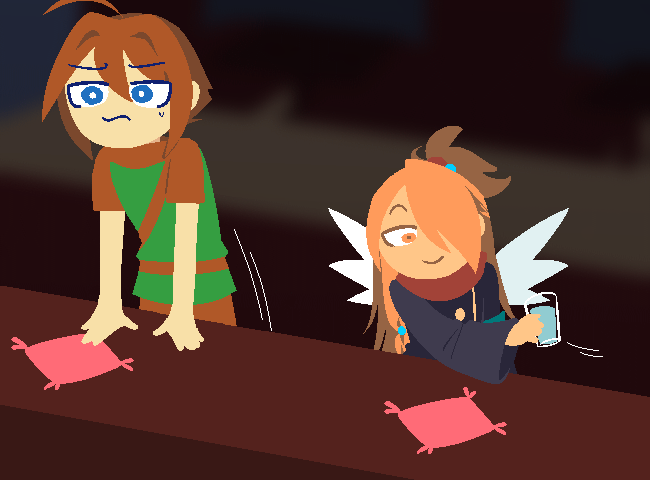 You couldn't really find a proper response to Kaji's advice in the end.

Instead, you opt to thank him plenty, and wish him well. Though he refrains from expressing it outright, Kaji seems incredibly pleased to know he was of help to you.

You excuse yourself, choosing to check that hotel room after all.
You'll just confirm for yourself if it's trapped, or something, or...

Agh! It's tiring to be this careful of someone who is blatantly not trying to be a threat at all! Is that what your "core" is like, so very stubbornly suspicious?

Though you'll still keep your wits about you to a reasonable degree, you're not inclined to think badly of Kaji right now.

This is the first person who didn't make you feel bad about your amnesia. 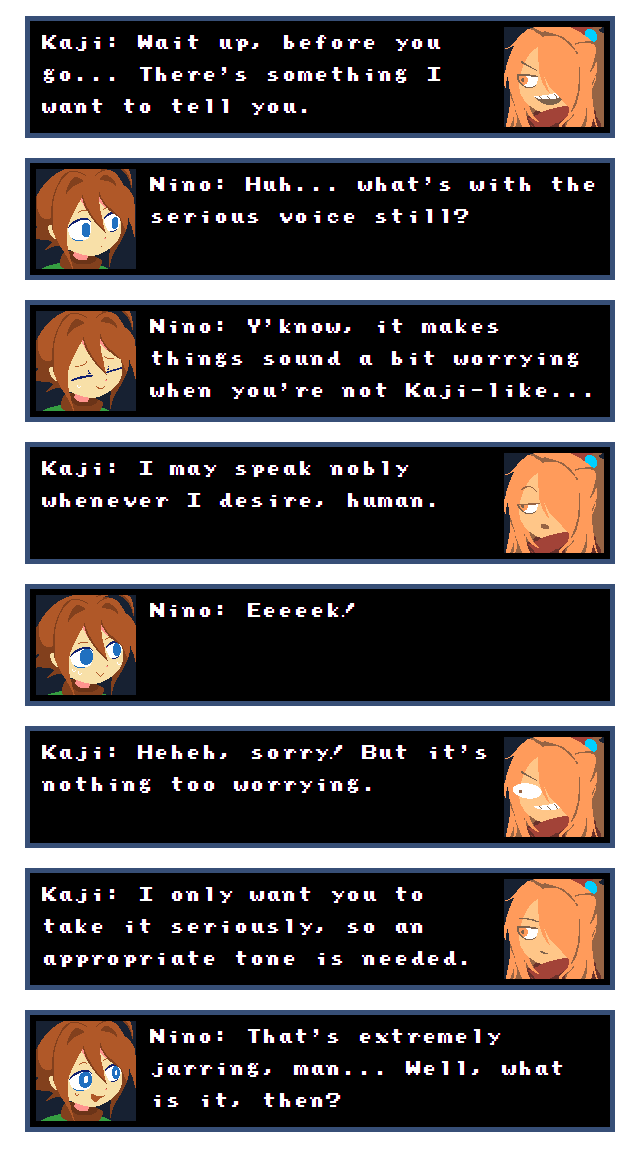 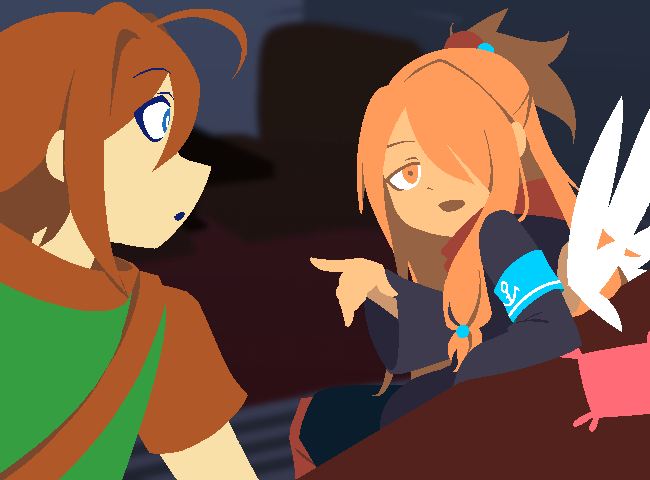 Nino: Ask Kaji to elaborate. Why in the world would a helpful winged be considered dangerous? 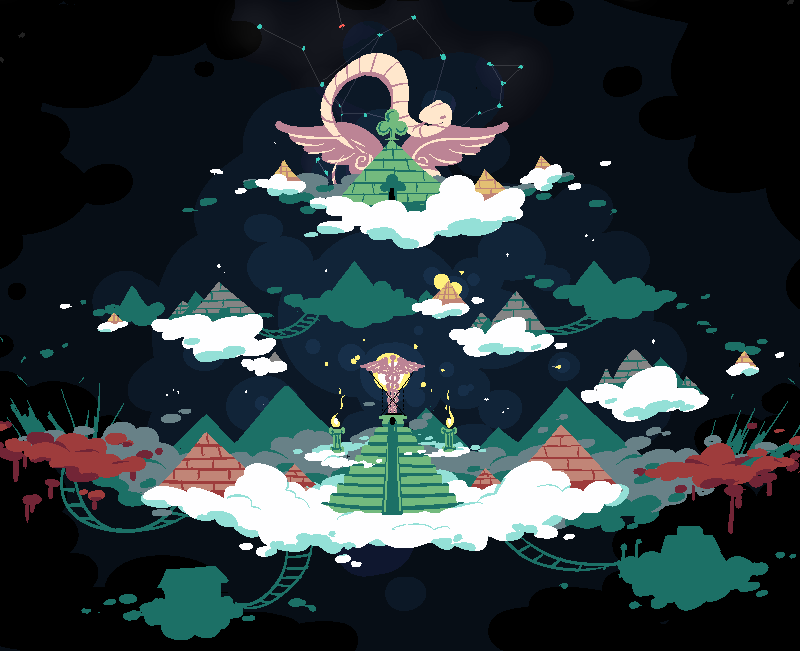 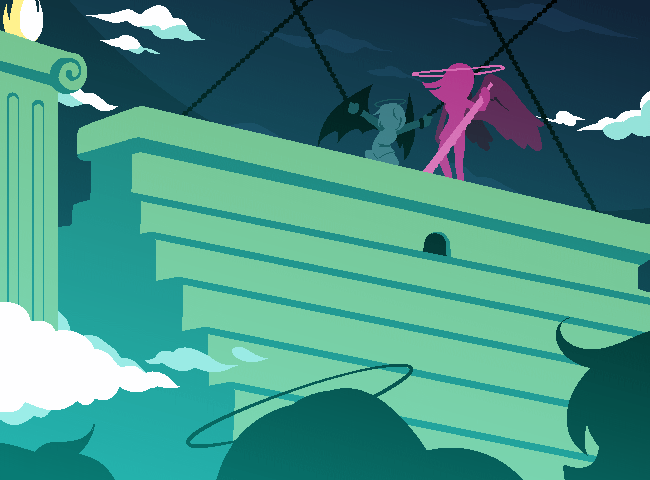 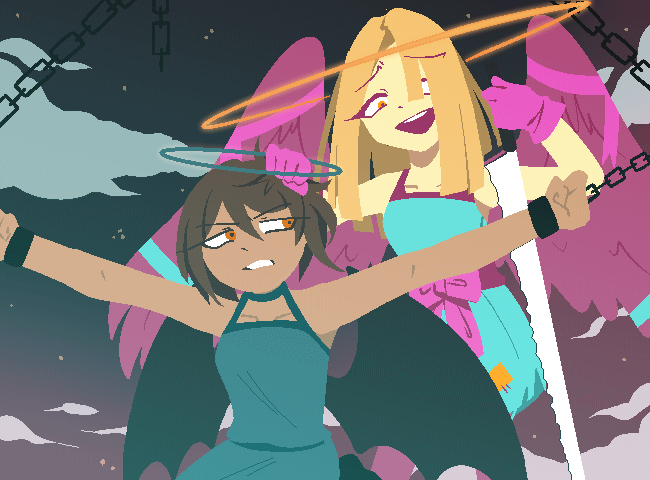 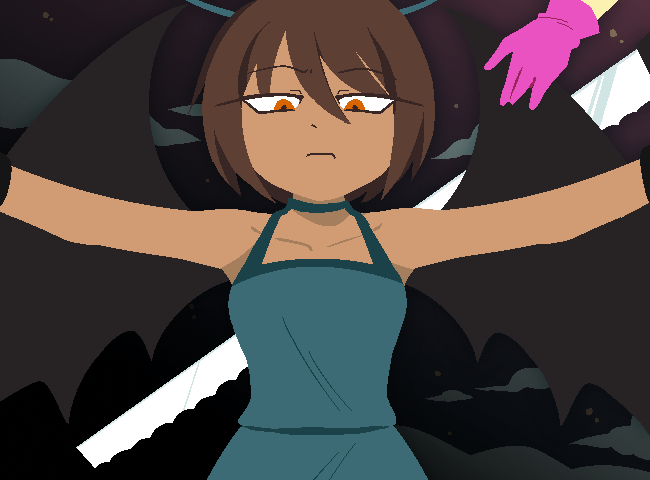 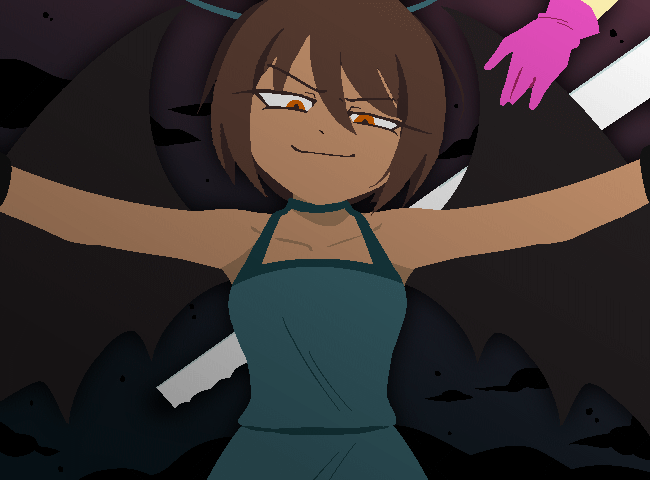 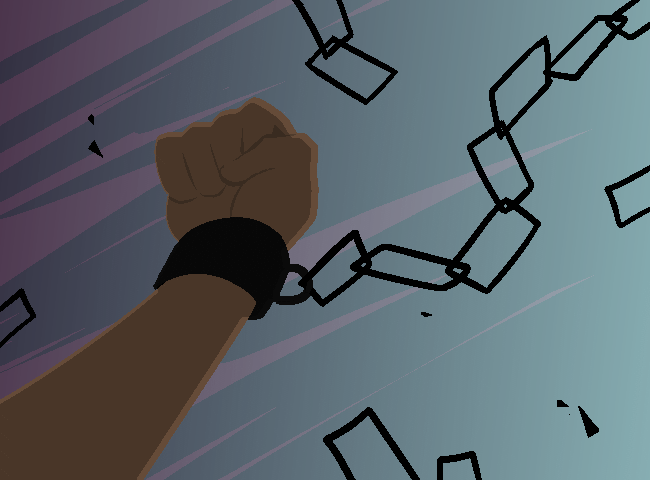 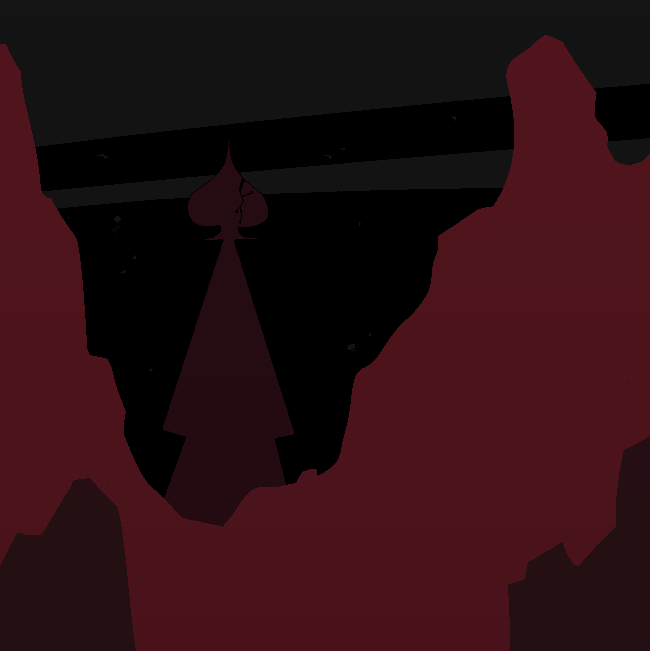 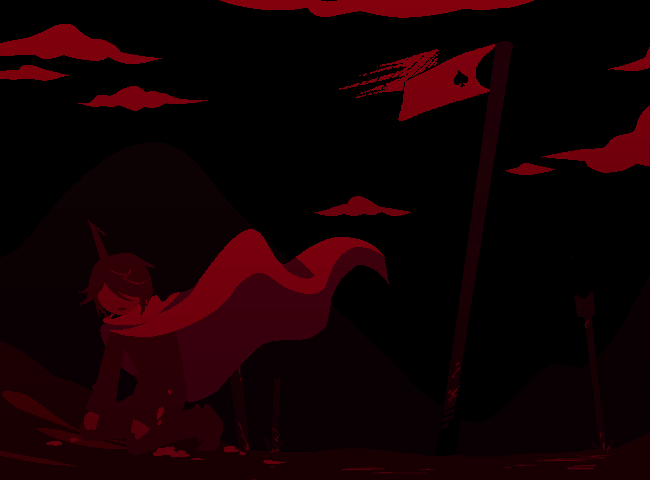 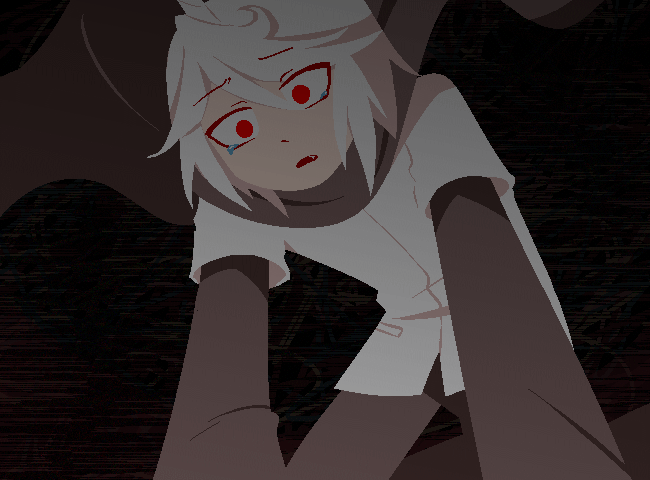 Nino: But Kaji was being nice for a winged, so... 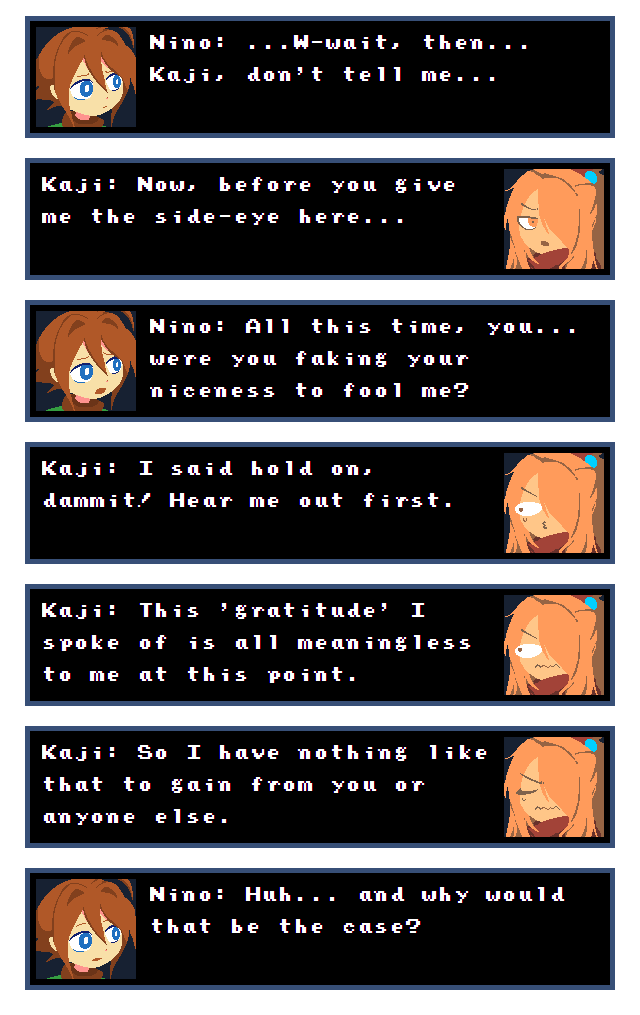 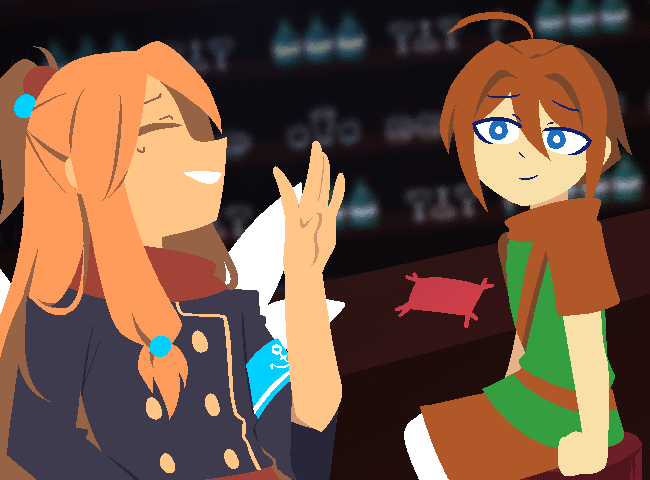 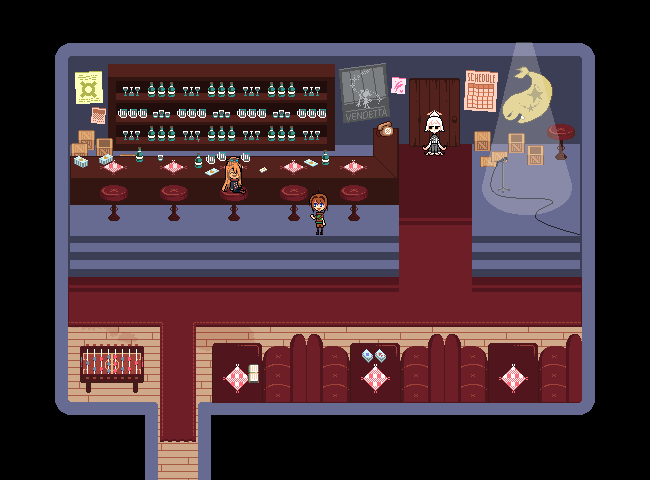 Kaji remains behind at the bar, possibly consuming more of the stuff he possibly shouldn't be over-indulging in, but what a FREE MAN does is none of your business!

He kinda didn't deserve to be treated with so much suspicion after all, but... ah, whatever! You had your reasonable reasons at first, okay! 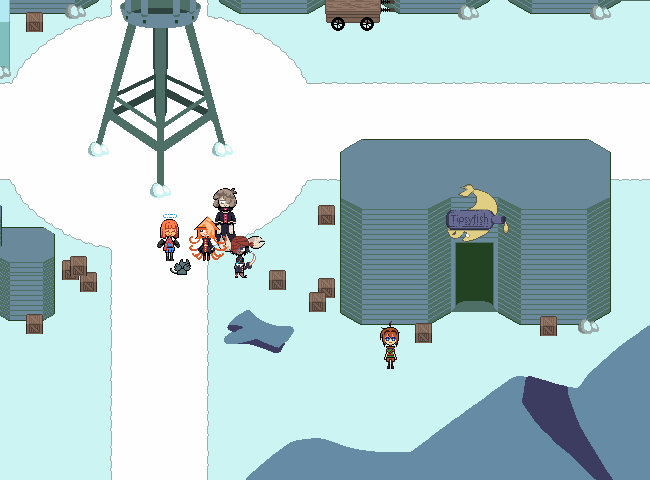 Oh! That's a brilliant idea!
It's one way to keep the record straight, just in case amnesia creeps up on you again.

Writing journal entries also sounds like it could be pretty exciting!
You'll look around for a suitable book and pen later.

Man... you sure do have a lot to keep in mind now.
You'll carefully think about everything when you head to your hotel room, get some peace and quiet, and... 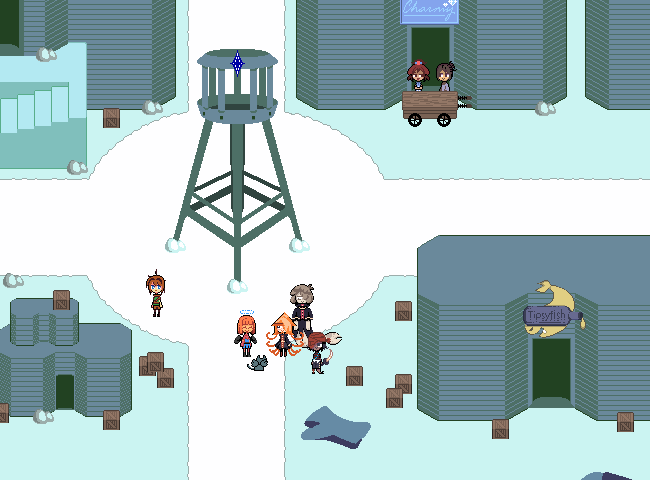 Oh, Meimona. There she goes.

It looks like she's completely found a new home here, hasn't she.
That's definitely a better lifestyle than constantly running away and coming up with odd methods of sorta-roundabout-stealing, just to get food and shelter for a day.

And, although you wouldn't be caught dead saying it out loud, you do think that Kaji would be a good boss to work under. 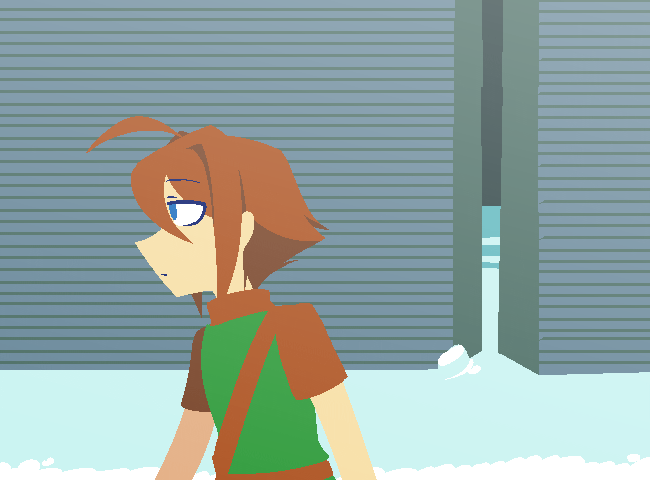 Then, it seems that this is where your time together ends.
It was nice while it lasted. 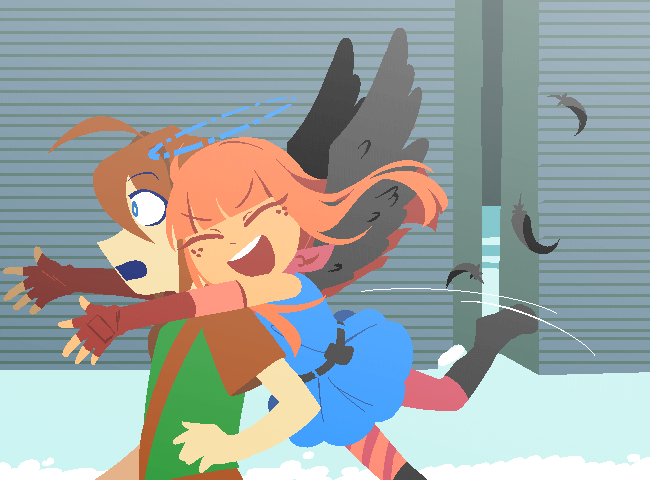 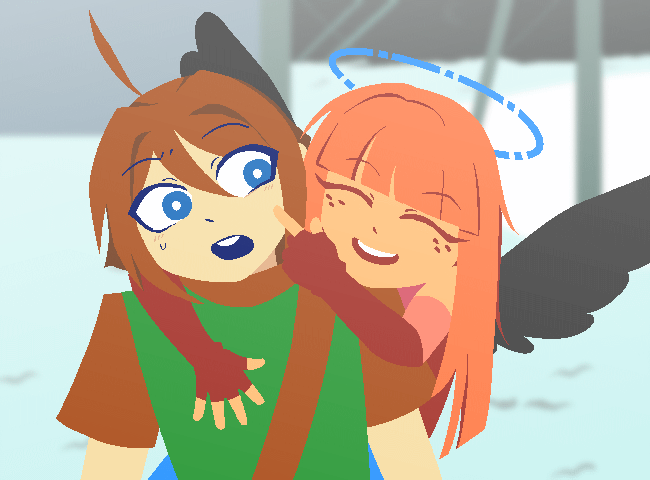 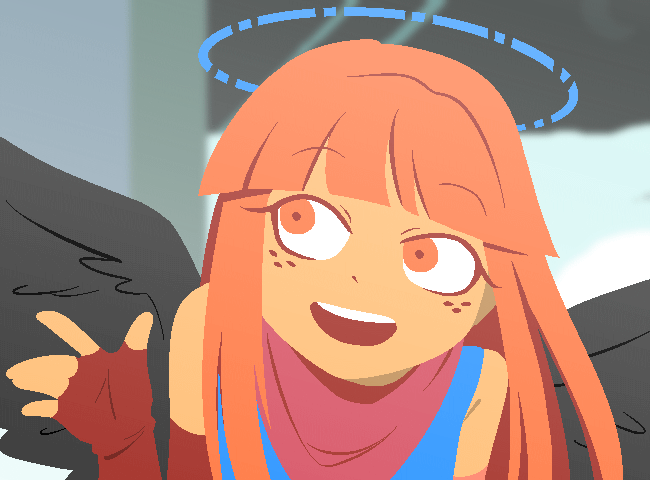 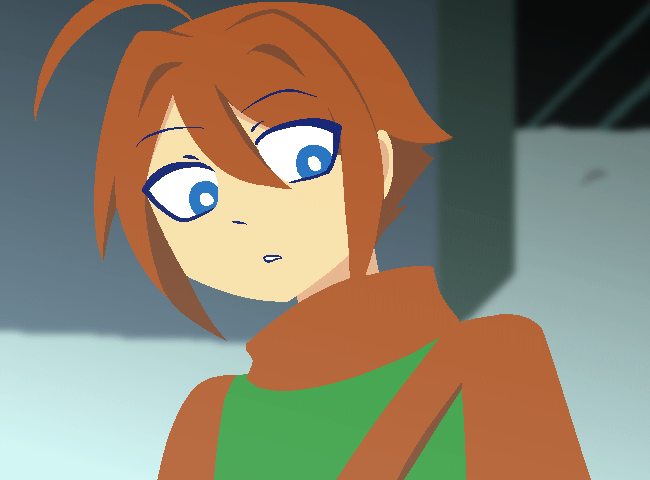 Nino: Keep in mind with your newly learned information that she might just be using you for gratitude.
Subscribe
Login
13 Comments
Oldest
Newest Most Voted
Inline Feedbacks
View all comments

Nearly a month's worth of panels where I try to make two boys sitting in a bar look visually interesting :p Welp, it's done now that we bid Kaji a good farewell, thanks for reading! Also, thank you always for leaving comments. Seeing responses on updates motivates me to keep going, and often helps make the writing more interesting!

There were some angelic titles mentioned in this update to clarify the scope of how capable winged can be, and also quite a bit of Celestial-related info in older updates. If you are curious, you can read about all these background-history-unseen-characters here: https://oceanfalls.net/all-characters. This is not necessary information for Oceanfalls itself, hence why it's on a separate page from the main characters' page.

There will be no update next Saturday, since I will be busy preparing for my midterms. I will resume the regular weekly update schedule in 2 weeks, on the 12th of March.

You've really been killing these past several updates! You've definitely kept the visuals interesting, and learning more about the world and the winged has been super enthralling!

As always, I'm looking forward to what you have in store next!

This information, at least to me, makes nice, helpful winged MORE trustworthy, rather than less. They're not just helping out of the goodness of their heart and the immaterial bonds of emotion, but to them, one of those bonds of emotion is VERY material. Being helped out of the kindness of someone's heart is nice, but a relationship where both parties are getting something out of it is more stable and healthy.

Nino: Even at worst, things will work for the best. Her “luck” can get you your memories back by somehow dragging you where you need to go, and she might get something out of it, but you should be grateful anyways. She has already proved herself in morality to be worthy of being with your party, like taking care of boyfriend and everyone else, so helping her out a little while also helping yourself can’t exactly hurt. On that note, check your party again, just in case. Stay a bit more cautious while showing it less in the future, otherwise people might think you’re on to something, and despite your pride, you can feign playing the fool. If Kaji hadn’t let you go, you’d probably have a tougher battle on your hands.

I've been trying to look for that page that I remember where Nino's narration/internal monologue(?) called someone "useful" and I noticed in https://oceanfalls.net/p/4338 Meimona says "I need you to believe in me!" but the believe was colored orange and I checked and according to inspect (Ctrl+shift+I, at least on the device I'm using) it was "royalgold", which is also used several times in https://oceanfalls.net/p/9152 this page, several times when bringing up things related to Kaji being a "guide", but also at least once with the dialogue "no one would dare defy a monarch" , also "royalgold" just... the name itself. I checked another instance on this same page of text being colored differently then the color of someone's text normally, when Kaji's text turned red it was "suvillan". Looking at THAT, I realize what if there are instances of someone's text color appearing where you could get their name before they were revealed?

While my info is useless for knowing how to find colors you can find useful in the search box. It should be below the latest updates.

Decided to start looking again.
> Nino: Try to believe. is the page I was looking for where Nino's internal monologue says "Your expert analysis currently suspects this to be the case only at first glance. Who would call a friend a valuable asset, after all? Certainly not you.", so I was wrong about Nino calling Mei "useful" in their internal monologue. Still, I couldn't find anything on the page or recall anything about that section where Nino brings up people being "assets", which is just a wee bit shady. Then again, there's already a few things that make Nino suspicious.

These the ones containing the useful assets? Found them through searching without plurals.

Meimona can join, but perhaps we should mention to our party that we may have an agenda, or well, we will when we remember it. We can't seem to remember our goal, but it seemed very important and may have had something to do with why we were in the monster world.
Either way, I think our best bet at regaining our memories are getting new ones, it seems that whenever we have an experience or interaction that reminds us of something we forgot we remember it, so we should experience as much as possible to remember as much as possible.
Speaking of which, ask Aria about her illusion abilities, maybe if you see her in her monster disguise it can jog your memories.

Nino: Try your best to know better than to be suspicious of Mei. She's your friend... right? Plus, Kaji told you winged tend to take off after getting their fill of gratitude, but Mei seems dedicated to you for the time being.

Nino: Keep in mind with your newly learned information that she might just be using you for gratitude. That said, regardless of whether she is or not, that's no reason not to accept her help, just not to become reliant on it.

Heh, I just recently finished Skyward Sword, and I can't help but be reminded of the "gratitude crystals" you get for helping people.